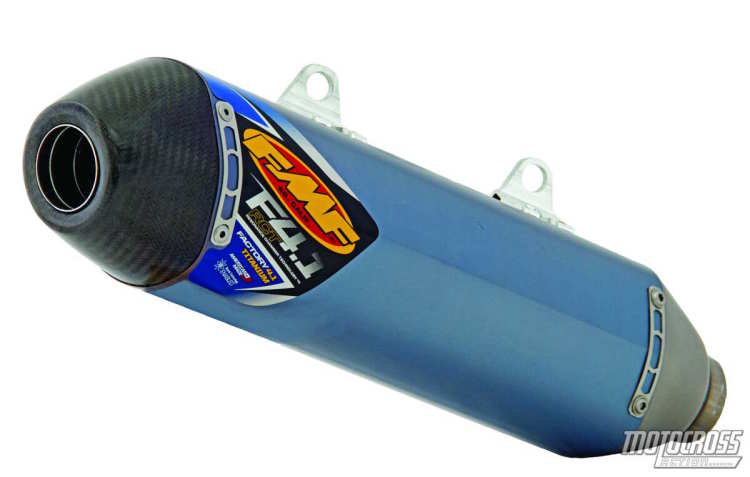 WHAT IS IT? The Factory 4.1 is FMF’s premium race exhaust system for the new 2014 Husqvarna FC450. It is the choice of several Husqvarna support and offroad teams.

WHAT STANDS OUT? Here’s a list of things that stand out with FMF’s Husqvarna FC450 Factory 4.1 exhaust.

(1) Analysis. You don’t have to be a Wharton School of Business graduate to realize that the Husky FC450 is really the KTM 450SXF in white clothing. Thus, you can extrapolate that FMF’s Factory 4.1 exhaust system for the Husky is really the KTM system—minus the wardrobe change. And that is true. But what isn’t true is that the KTM 450SXF and Husky FC450 come with the same exhaust pipe. They don’t. While all of the 2014 KTM four-stokes use the open-flow 2013 KTM 250SXF mufflers, the 2014 Husqvarna uses the 2013 KTM 350SXF muffler. So what? The 2014 350SXF muffler has two perf-core cones inside the 42mm muffler core (one facing forward and one facing backwards). These cones restrict exhaust flow, lessen the exhaust note and dampen throttle response. So while the FMF Factory 4.1 Husky exhaust is the same pipe as the KTM pipe, it makes a bigger difference on the muffled-up Husky.

(2) Performance. In stock trim, the 2014 Husqvarna FC450 has a luscious powerband. It is broad, easy to ride and capable of putting out close to 57 horsepower. But, and there is always a but, its power starts out very mellow and builds incrementally as the rpm increase. In back-to-back tests against a KTM 450SXF, every test rider felt that the FC450 felt hollow down low—a problem that we attributed to the no-flow offroad airbox design and the two ice-cream-cone restrictors in the muffler. Every MXA test rider wanted the FC450 to hit harder down low, exhibit better throttle response and rev faster into the midrange. Enter the FMF Factory 4.1. It turned our Husky FC450 around and headed it in the right direction—although we did help by drilling quarter-sized holes in the airbox cover to get the engine to breathe.

(3) Fit. The three-piece FMF Factory 4.1 system slipped right into place, but the fit was tight between the frame and the shock reservoir. Surprisingly, FMF’s KTM 450SXF pipe will not fit on the Husky FC450 because of a clearance issue with the plastic subframe.

(4) Choices. FMF offers this pipe in titanium with a carbon end cap, blue-anodized titanium and stainless steel with an aluminum canister and carbon end cap.

CANADA CRACKS DOWN ON 250 TWO-STROKES: TOO GOOD FOR THEIR OWN GOOD