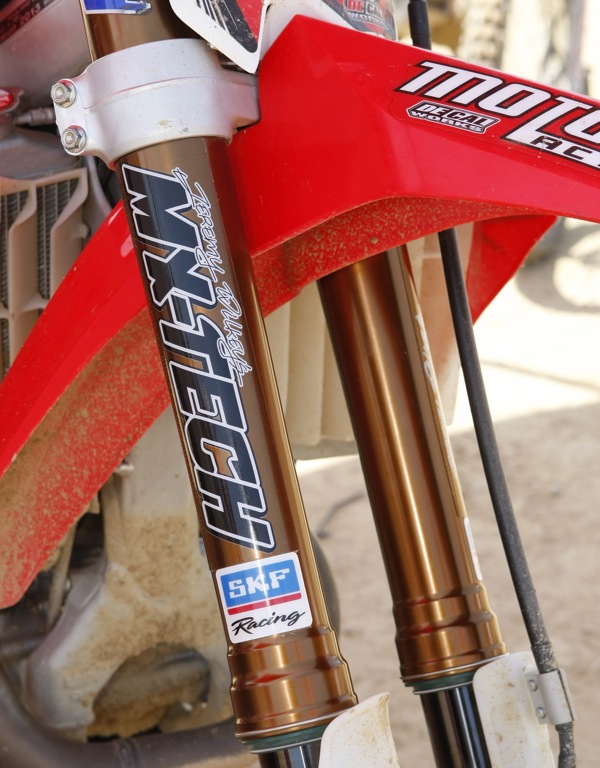 WHAT STANDS OUT? Here’s a list of things that stand out with MX-Tech’s MXT/SFF fork conversion.

(1) Problem. Not every rider is a fan of air forks. The Kayaba PSF fork operates on 33 to 35 psi. PSF forks offer lots of adjustability, but suffer from the pressure-ramp-up spike common to all air-suspension systems.

(2) MX-Tech’s solution. In the simplest terms, MX-Tech reworks the Kayaba PSF forks to make them similar to single-spring Showa SFF forks—but with a twist. To fight the dramatic pressure rise at the end of the PSF’s stroke, MX-Tech turns the air leg into a low-pressure unit, while installing a 1.0 kg/mm fork spring in the other leg. The end product is neither PSF nor SFF, but a blend of the best of both systems.

(3) PSF left leg. The air side runs approximately 10 to 15 psi of air. The air pressure does not hold the fork up—that task is left to the coil spring. Instead, the air pressure aids the compression stroke and doubles as a preload adjuster for the spring side. Fifteen psi equates to 7mm of preload. This is a simple and handy tuning tool to stiffen the fork’s initial movement. As a bonus, the low pressure in the air-fork leg doesn’t turn a small seal nick into the gusher that higher pressures do. The low air pressure makes the fork’s movement very linear. Plus, an air leak doesn’t lead to a total fork failure.

(4) SFF right leg. MX-Tech’s Jeremy Wilkey turned the right Kayaba PSF fork leg into a Showa SFF single-spring fork leg. It’s not as easy as it sounds, but that is what MX-Tech did. Jeremy used a 1.0 kg/mm Showa fork spring with a hydraulic stop and enough oil (165cc) to provide lubrication for the moving parts. All the valving is in the PSF left leg. Interestingly, the valving is not two times stiffer than two leg valvings, but actually 2.3 times stiffer.

(5) Performance.  We may have oversimplified the creativity of MX-Tech’s MXT/SFF fork conversion, but we can tell you that it works great. We spent a couple days testing and racing with both the KX450F and CRF450 conversions, and the difference was night and day. The MX-Tech forks were plusher, didn’t spike at the end of the stroke and were ultimately more tunable. The MX-Tech MXT/SFF setup created the best Kayaba PSF forks we have ever tested, with the caveat that they aren’t actually Kayaba PSF forks after MX-Tech is done with them.

WHAT’S THE SQUAWK? Price, but when you consider that you are taking Showa and Kayaba forks and turning them into a set of hybrid forks, the $998 price seems reasonable.

For any rider with doubts about Kayaba PSF forks, MX-Tech has the ultimate solution.