WHAT IS IT? The Yamaha YZ250 has only had small refinements in the last decade. This has given aftermarket companies plenty of time to develop parts to address the bike’s weaknesses. Many riders complain about a feeling of instability in the front end, and while the YZ250 two-stroke isn’t the greatest turning bike on the track, it has a workmanlike feel. Ride Engineering offers a unique solution for his problem with 22mm offset clamps and a Honda steering damper.

WHAT STANDS OUT? Here’s a list of things that stand out with the Ride Engineering YZ250 22mm clamps and Honda Progressive Steering Damper.

(1) Stock trim. It is no secret that the Yamaha YZ250’s cornering is average at best, and the front end can be twitchy at speed. There are many ways to change the geometry to make the bike turn better or be more stable, but fixing one problem often makes the other worse. The simplest fix is to raise the forks 5mm for better cornering and crank down on the steering stem to slow down the front-end twitch; however, these changes are just band-aid fixes. 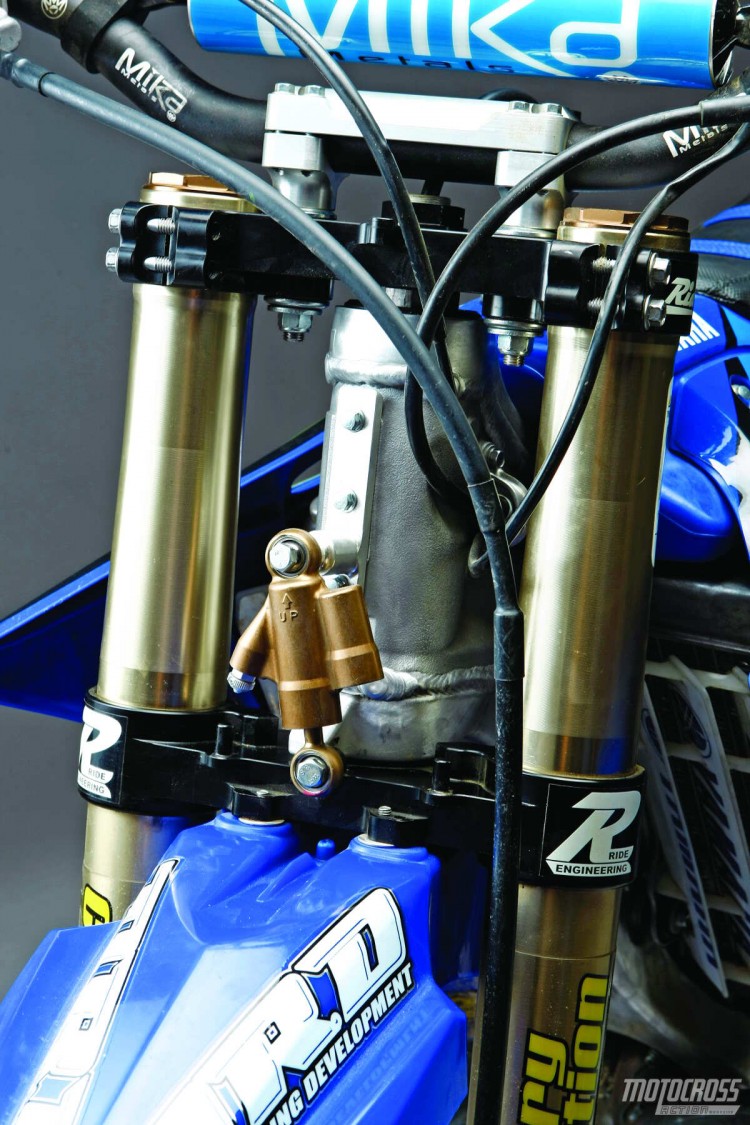 (2) Goal. Ride’s goal was to hit two birds with one stone. They wanted better cornering with increased stability. Although neither Ride Engineering modification would be all that effective by itself, the MXA test crew wanted to see if combining the new offset with the HPSD damper would do the deed.

(3) Offset clamps. The Ride Engineering 22mm clamps increase trail over the stock 25mm clamps. The increased stability is a confidence builder, but, as we learned years ago, the clamps don’t help the YZ250’s cornering traits. At $499, MXA doesn’t feel that going to 22mm triple clamps is an improvement worth doing. At best, they give the front end a little bit more rigidity, along with a bit more vibration over the stock clamps, but adds vagueness to the front end.

(4) Showa steering damper. Ride Engineering sells two models of Honda’s HPSD steering damper: a 20mm diameter and a 24mm diameter. You can mount the HPSD dampers on Ride’s YZ250 triple clamps by putting a mount on the bottom and a bracket on the Yamaha head tube. This bracket requires tapping three holes in the YZ250 frame (Ride Engineering provides the tap and mounting hardware).

(5) Performance. Once we installed the 20mm HPSD damper on the 22m triple clamps and slid the forks up in the clamps by 5mm, this changed the cornering of the YZ but took a toll on stability—which required our faster test rider to turn the HPSD damper to its stiffest setting to control the front end. We tried raising the rear of the YZ250 with less race sag, but that only worsened our troubles. Our choices were to re-valve the 20mm HPSD damper or swap to the 24mm damper. Since we had no assurances that firmer damping would be the cat’s meow and had already spent $800 to fix a problem that is only a major issue for supercross riders, we decided to cut our losses.

(6) Bottom line. We thought that the HPSD steering damper would calm the front of the YZ250 down and allow us to run a steeper head angle to improve the cornering. And maybe it would have, but not in combination with the 22mm offset clamps. We would stick with the stock 25mm triple clamps and utilize the poorman’s steering damper (tightening down the steering stem nut). We weren’t surprised that we didn’t like the feel because the YZ250 front end has been a tough nut to crack for the last decade. Supercross riders swore by 22mm clamps, but when used outdoors they didn’t work. In the mean time Ride Engineering has had great luck with the HPSD steering damper and offset changes on other brands. Perhaps the HPSD damper would be a benefit on the 25mm clamps, but that isn’t an option from Ride..

WHAT’S THE SQUAWK? Three quibbles. (1) The clamps lead to more vibration and increased rigidity. (2) The price was on the high side. (3) We don’t like the idea of drilling into the frame, even though the installation was seamless.

The price was too high for the return on investment

HOW TO INSTALL A FULL EXHAUST SYSTEM WITH FMF