WHAT IS IT? The MXA wrecking crew members have never been big fans of the airbox design of the 2014–2017 Yamaha YZ450F, nor its little brother, the YZ250F. The YZ-F airbox is a serpentine maze of tunnels that leads to a rather underwhelming airbox and miniature air filter. Twin Air’s new “humpback” airbox kit attempts to rectify the limitations of the stock YZ450F system by creating more open space within the airbox to optimize the airflow to the engine. As a bonus, the bigger airbox allows for a larger air filter. 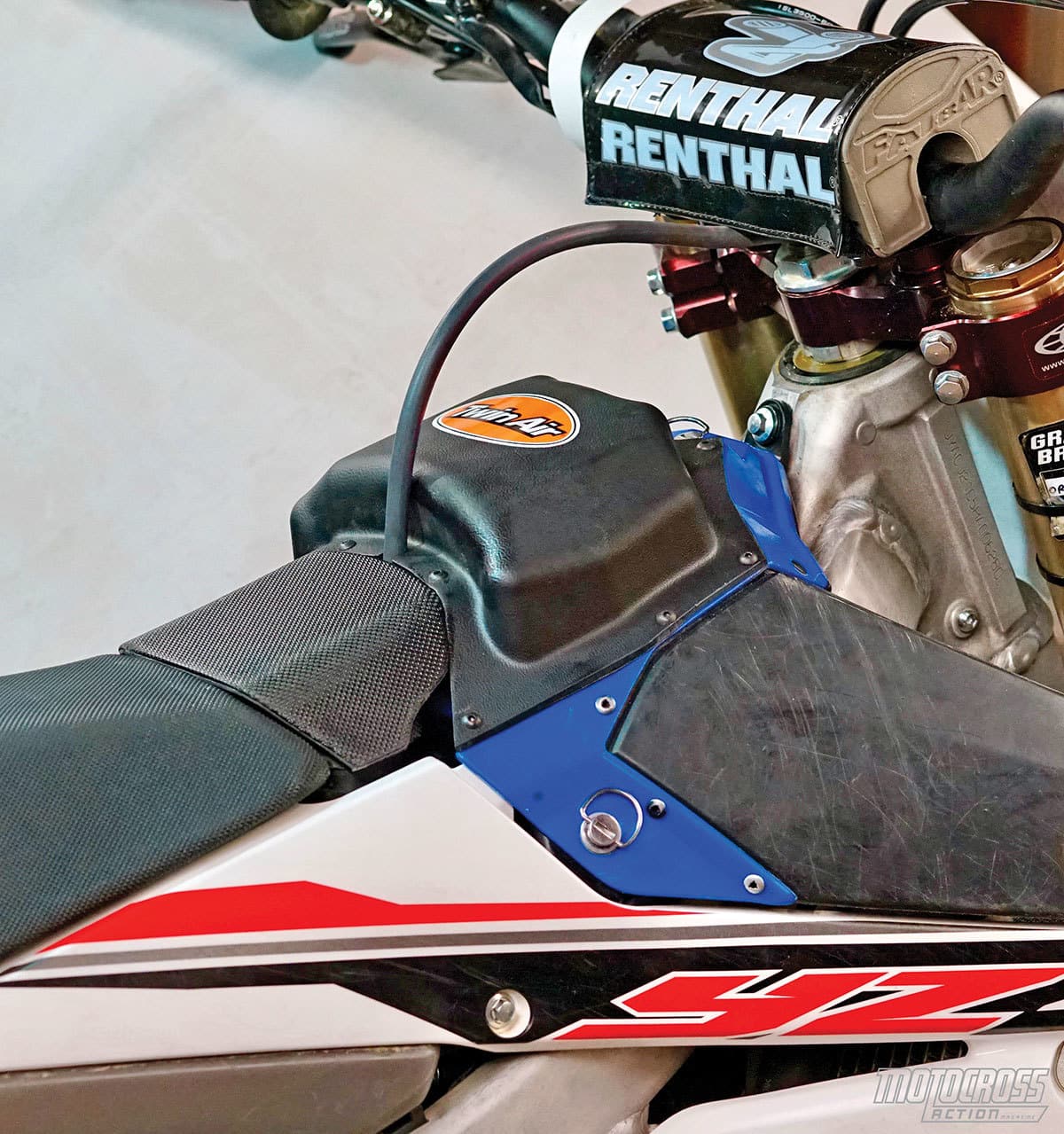 (2) Concept. Twin Air has worked on the YZ450F airbox since 2010 when it introduced its first YZ450F Powerflow kit. It required a complete overhaul of the YZ450F airbox to accept a different air filter, inner airbox and intake tract. For the 2014 YZ450F, Twin Air didn’t use such a drastic approach with its Powerflow kit. It focused on improving the interface between the intake tract and the air filter by crafting a rigid aluminum sealing ring and filter cage. There were no major airbox mods. Now, for the 2017 YZ450F, Twin Air has redesigned the YZ450F airbox, this time focusing on the filter, cage and dimensions of the airbox cover.

(3) Installation. Set aside about an hour (with a drill, jigsaw and 5/32-inch drill bit). In this order, you will: (1) Remove the upper airbox lid, which includes the upper half of the air scoops, and drill out the black inner panel’s plastic rivets and the four metal rivets on the top of the airbox cover. (2) Apply the supplied template to the top of the airbox cover and cut out the marked area of the template. (3) Put Twin Air’s humpback lid over the holes and insert the supplied bolts through the holes where the four metal rivets were. (4) Remove the seat and the eight bolts holding the backfire screen in place. Replace the fire screen with the CNC-machined aluminum Twin Air cage (using the eight stock bolts). That’s it! Put the Twin Air filter in place and install the humpback airbox lid.

(4) Performance. You don’t need to be Sherlock Holmes’ practice mechanic to see that the Twin Air Powerflow airbox kit doubles the size of the YZ450F airbox, allows for a 50-percent-larger air filter (14mm taller) and eliminates the restrictive wire backfire screen. It gave MXA’s YZ450F a 1-horsepower increase from mid to top. Throttle response was improved throughout the range, and the large filter didn’t need to be cleaned as often as the stocker.

WHAT’S THE SQUAWK? If you aren’t good at drilling, cutting and replacing, have Sherlock Holmes’ practice mechanic do it for you.

MXA RATING: Although not the most attractive addition to your YZ450F, the Twin Air’s humpback airbox kit makes up for ugly in spades.