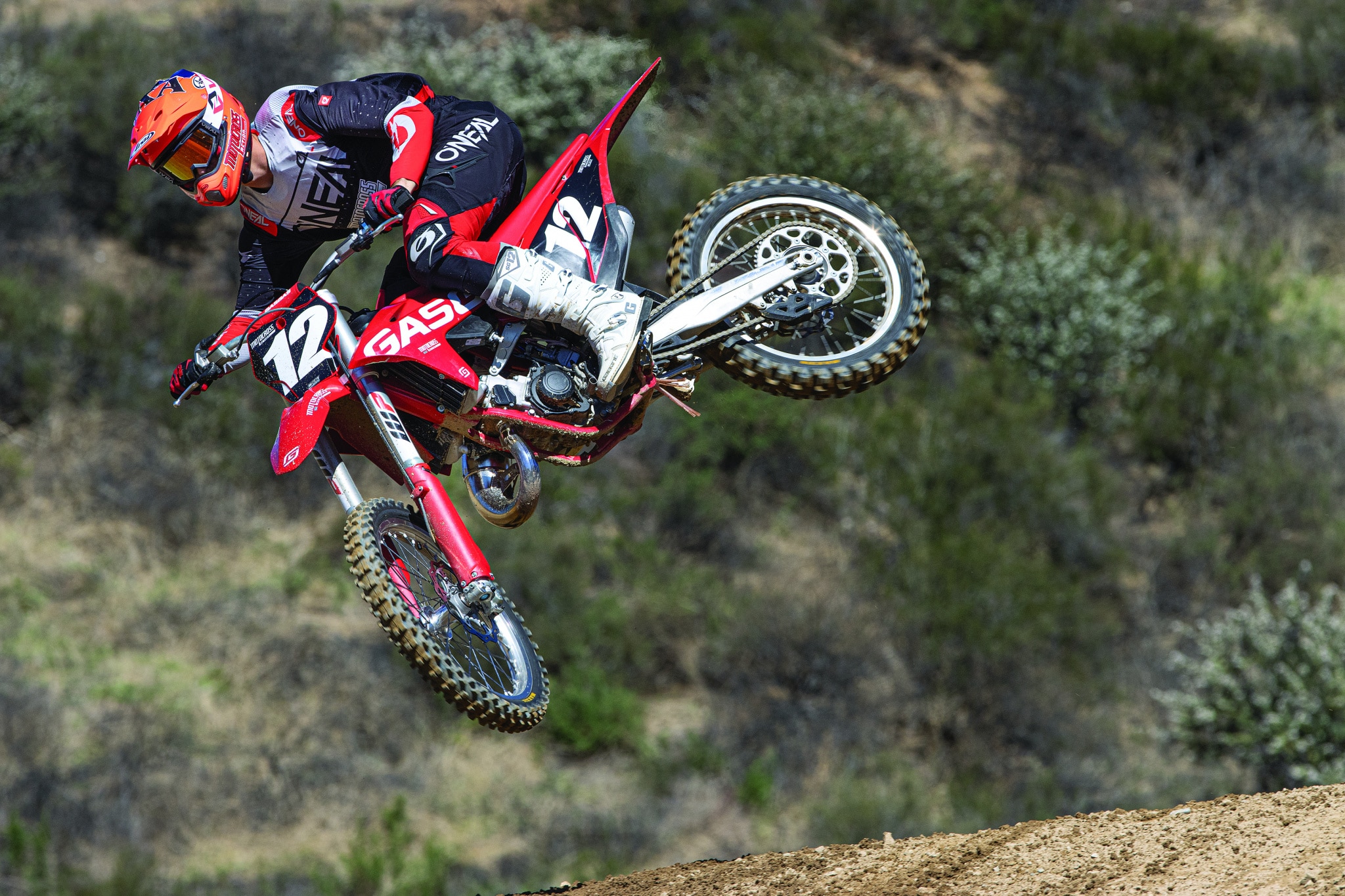 (1) Suspension. All three Austrian brands (KTM, Husky and GasGas) share the same WP XACT air forks, but each brand is a little different. While the Husky and KTM have the same internal valving, the Husky forks are 10mm shorter. As for the GasGas, it is the only one out of the three Austrian machines that gets different valving. The valving is much like that of 2020 Husky forks, but better. The setup is midway between an off-road and motocross suspension setup. The overall suspension setup is focused on being softer and more absorbent than typical motocross suspenders but still capable of managing big hits better than off-road forks. It is important to bleed the air out of the outer chambers, especially if the forks begin to feel stiff.

The GasGas rear shock works very well. Although we do make clicker adjustments, we rarely stray far from the stock 15 clicks out on compression. As a rule of thumb, most MXA test riders leave the low-speed compression on the stock setting and focus on the high-speed dial to make the changes. It should be noted that the GasGas rear shock-spring rate is a softer 42 N/mm, while KTM and Husky have 45 N/m springs. 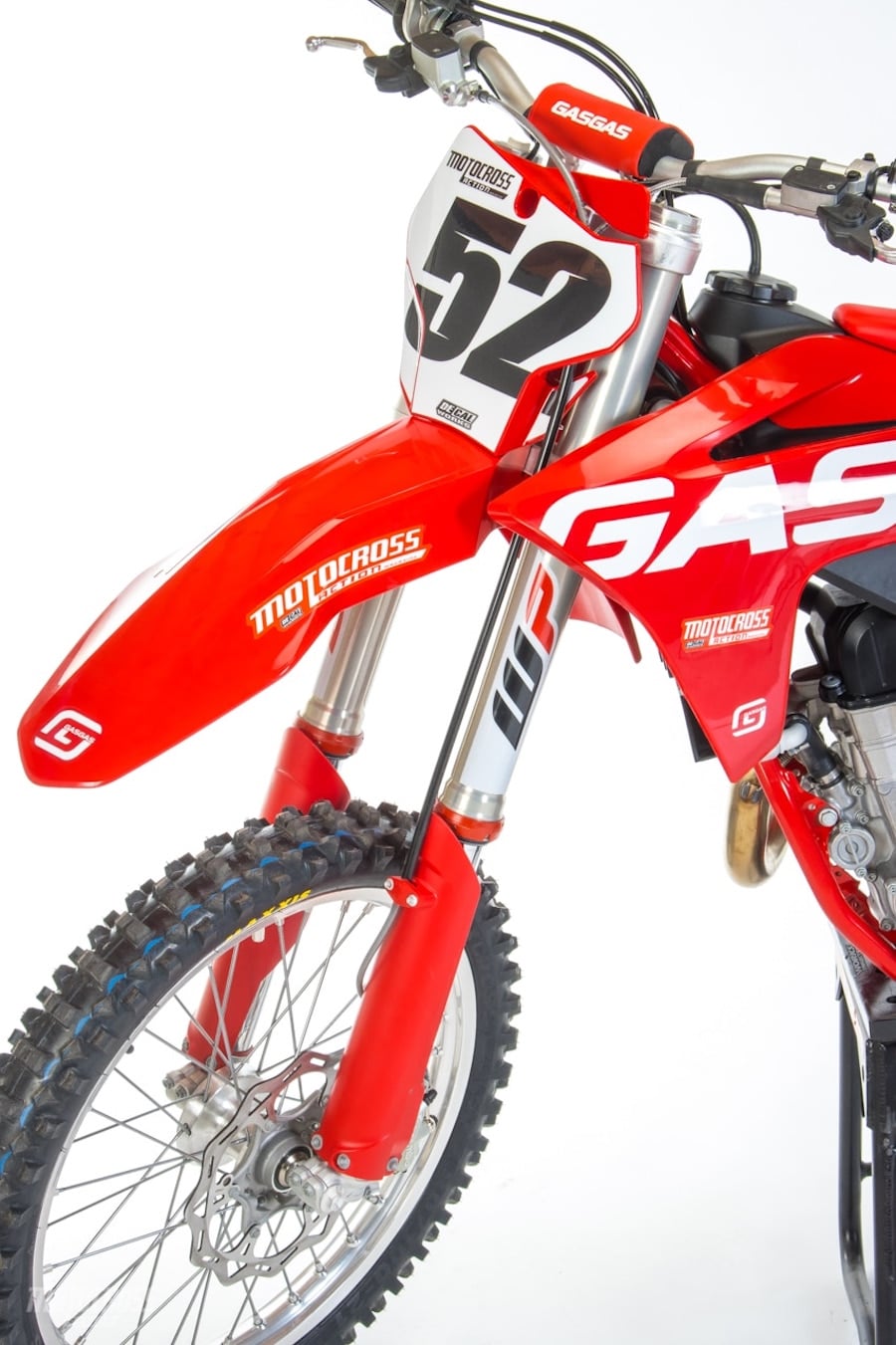 (2) Forks. There is a learning curve to living with WP XACT air forks, but it is not as complicated as plasma physics. In simple terms, air replaces the coil springs. That is all it does. Do not waste time trying to tune your compression or rebound damping by adding or subtracting air pressure. That is what the clickers are for. Once you find the correct air pressure for your weight, speed and track conditions, turn your attention to the clickers. (4) Map switch. The GasGas ECU doesn’t come with the KTM/Husky multi-switch that allows access to Traction Control, Launch Control or Map 2. The stock GasGas map is fixed on the standard Map 1 from the KTM and Husky. The good news is that the GasGas ECU has Traction Control, Launch Control or Map 2 hidden in the ECU and ready to be released. The bad news is that you have to buy the $170 multi-switch from your KTM dealer to activate it. Its SKU number is 790-3997-4144. It plugs into existing wiring behind the front number plate. The stock maps can be enhanced by running them in conjunction with traction control. Don’t fret that traction control will slow the bike down; it only comes into effect when the rear wheel breaks loose and spins freely. 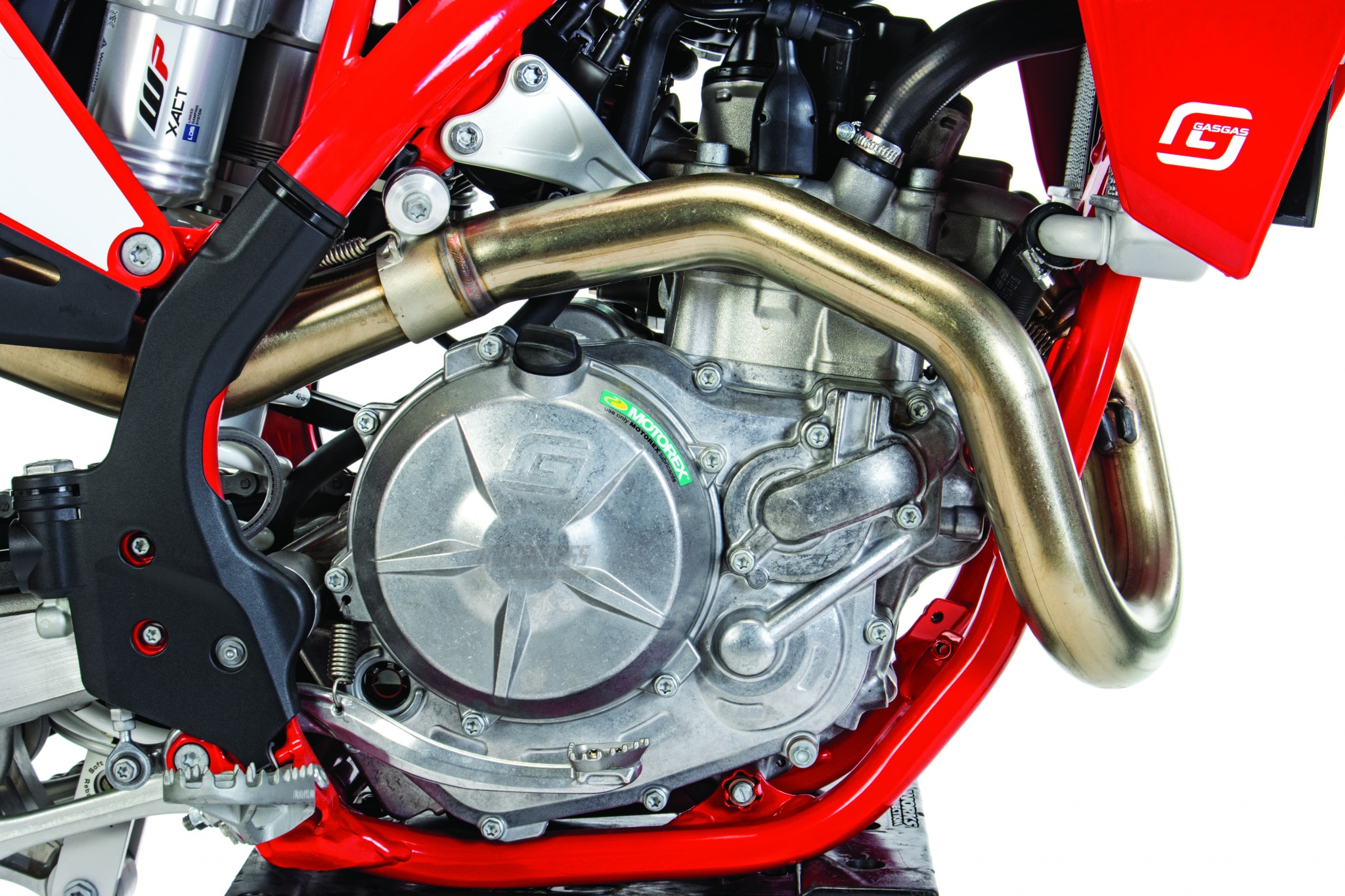 (5) Exhaust. The GasGas MC 450F has ice-cream-shaped cone restrictors in the muffler, but the MC 250 has a straight-through muffler core. All of the GasGas motocross models are missing the resonance chambers that come on Husky and KTM pipes. In truth, the resonance chambers are more for sound than power, but the MC 450F restrictors do cut down on throttle response. You can buy an aftermarket exhaust system for your MC 450F or get an MC 250F muffler from a fellow racer who bought an aftermarket exhaust. 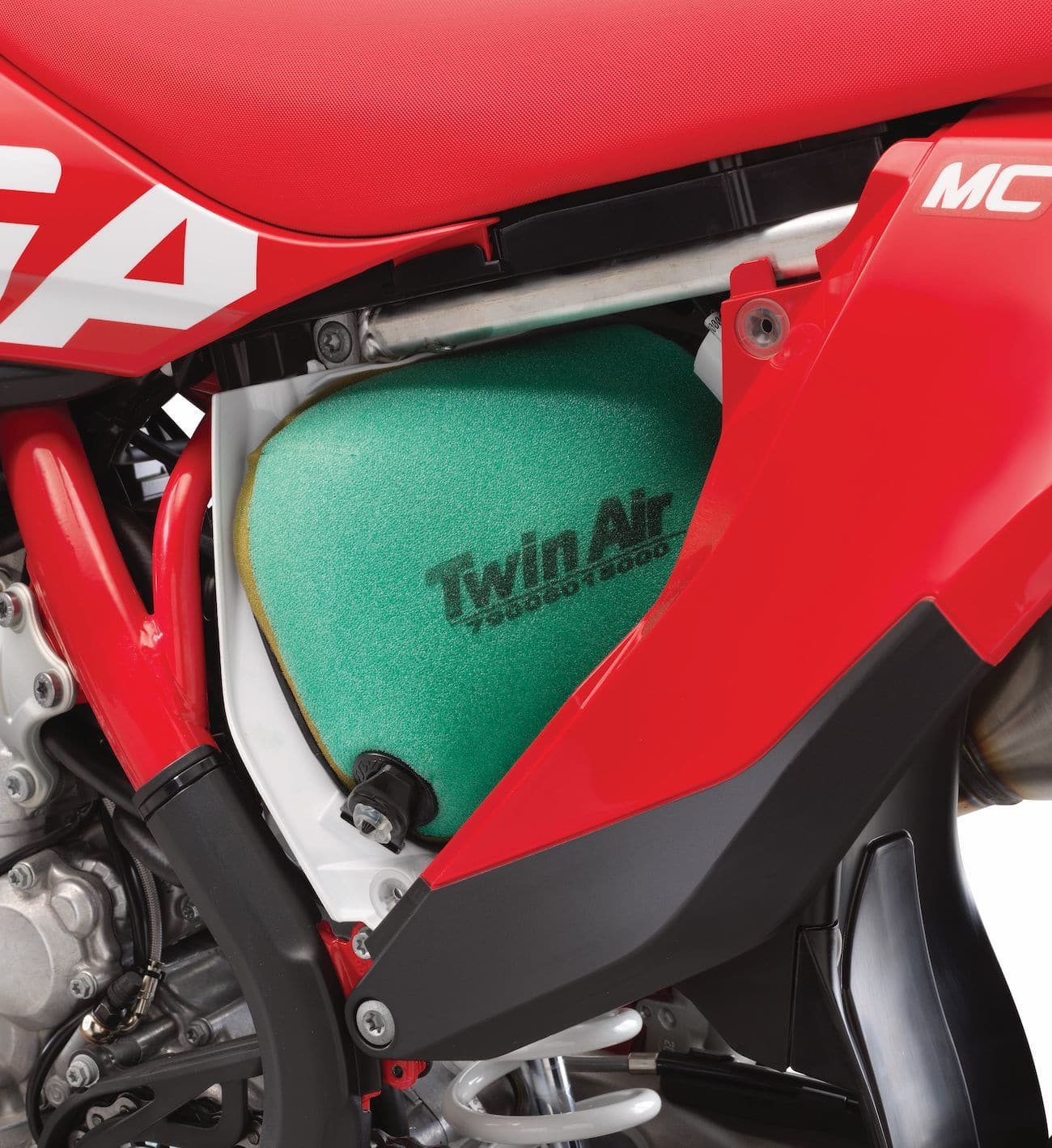 (6) Airbox. The GasGas MC 250F and MC 450F powerbands are not as crisp and snappy as the competing KTM models. The engine is not to blame. The problem emanates from the closed-off GasGas airbox cover. Here is how we fixed it: (a) We cut the internal lip off the inside of the airbox cover to allow more air in. (b) We drilled holes into the airbox cover (behind and above the air filter). (c) We installed a vented KTM airbox cover on our GasGas airbox (GasGas and KTM airboxes are identical). 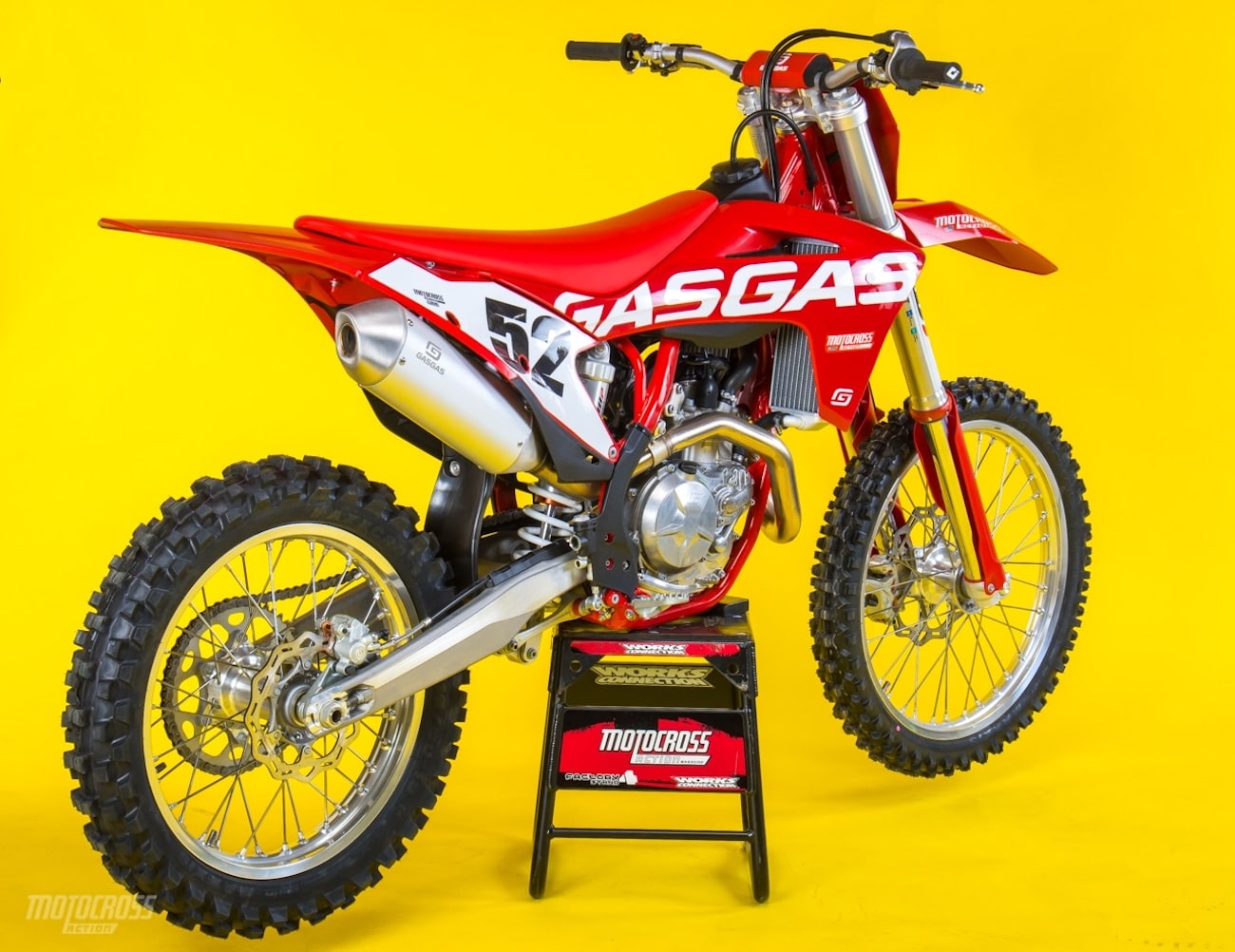 (7) Hour meter. Unlike on KTMs and Husqvarnas, there is no hour meter mounted on top of the GasGas triple clamps (because there isn’t any room on the forged triple clamps), but you can buy a GasGas hour meter and hour meter bracket from your local dealer that bolts to existing holes in the GasGas top clamp.

(8) Tires. GasGas chose to spec Maxxis MaxxCross MX-ST tires. The rear tire offers exceptional grip and traction when used in intermediate terrain, but the side knobs showed signs of cracking when used on hard-pack. The front tire delivers good but not great grip when pushed hard. With that said, the tires are worth trying at your local track before swapping them out; you might be as surprised as we were. 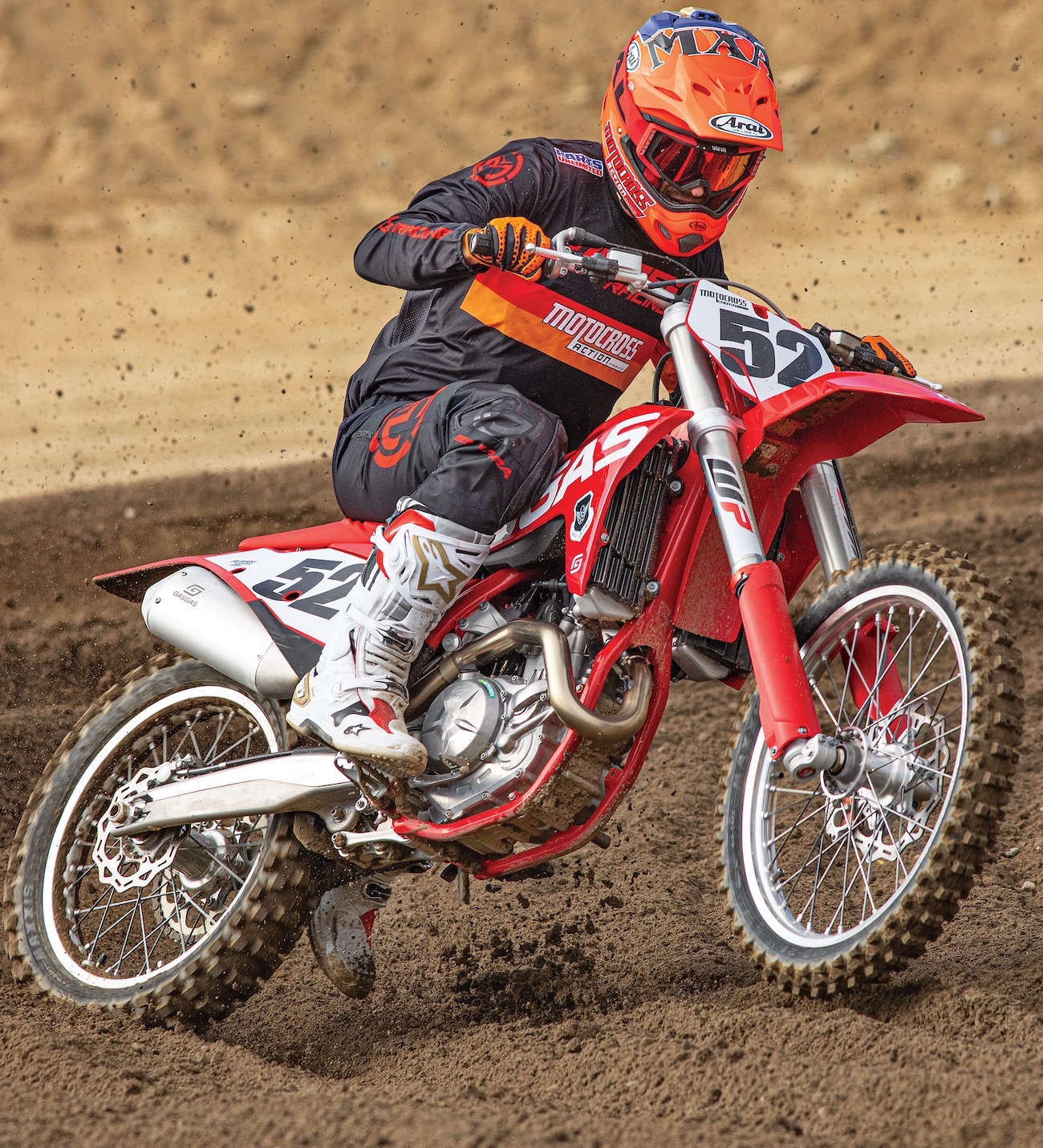 (9) Preload ring. Don’t hit the WP shock collar with a hammer and punch. Instead, turn the shock spring by hand while using a long, flat-bladed screwdriver to pry against the frame and the shock collar at the same time. Because GasGas spec’ed a lighter 42 N/m shock spring, riders over 195 pounds might need to switch to a 45 N/m spring. Check the bolts on the rear sprocket, shift lever, shock linkage, head stays and hydraulic clutch slave unit at regular intervals, but, most important, check the spokes after every race. Start at the spoke next to the rim lock. It is the first one to get loose.

(10) Throttle cam. The stock throttle cam has an incredibly long throw. Luckily, GasGas includes a black quick-turn throttle cam with each bike. Put the black cam on your bike.