A: No. The 2012 YZ125 might as well have been sub-contracted out to Xerox because it is a carbon copy of the 2011 model, which was the same as the 2010 model. The 2012 YZ125’s original design concept goes back to the 2006 model, and although it has undergone numerous modifications over the past seven years, its genes remain the same. 2012 Yamaha YZ125: The YZ125 has been coasting on its laurels for six years. It’s not the best 125cc two-stroke made anymore, so Yamaha needs to kick in some R&D dough.

A: It is more fun than a barrel of monkeys. To race a Yamaha YZ125, you have to lock your right wrist, keep your clutch hand limber, tap dance with your left toe and disconnect your brain. We’d be delusional if we suggested that a Yamaha YZ125 is a better racing machine than the YZ250F four-stroke. It isn’t better in the results sense, but it is more fun.

It can fly through tight, twisty turns, and the flat-out attack plan makes every straight into the Bonneville Salt Flats. It loves jumps with steep faces, because at 199 pounds, it is flickable. It is possible to beat riders on 250Fs on a YZ125, but best of all, if you beat anybody, you feel like a hero. Thanks: Soon there will be updated plastic available from UFO to make the YZ125 look like the latest generation YZ250F.

A: If you want to run with 250Fs or 150cc two-strokes, the YZ125 will need some help. Here is a quick list of things that YZ125 owners can do to make their bikes more competitive.

Gearing . Before you buy a pipe, port the engine or slip in aftermarket reeds, gear the YZ125 down. Adding one tooth will perk up second gear, get you to third gear sooner and make the overall ratios between the six gears more user-friendly.

Pipe . Exhaust pipes are an easy way to add power. They add about two horsepower to a 125cc and cost one-third of what four-stroke exhaust systems cost. FMF and Pro Circuit YZ125 pipes cost less than $250.

Reeds. We run a Boyesen RAD valve to broaden out the power. The $179.95 RAD valve is a complete replacement reed block and valve assembly. Boyesen can be reached at www.boyesen.com or at (800) 441-1177.

Porting . A ported YZ125 with head mods is a potent high-rpm weapon. The cost to port the cylinder and mill the head is typically around $329.95. Contact Pro Circuit at www.procircuit.com.

Big-bore kit . With the exception of 125cc-only classes, the MXA wrecking crew sees no reason to stick with the traditional displacement. We have previously beefed up our YZ125s with a GYTR YZ144 kit. The kit includes a brand-new nickel carbide-plated Athena cylinder, cylinder head, 58mm piston with rings, pins, clips and gaskets, modified power valves, O-rings, and complete instructions. Best of all, it fits all 2005?2012 Yamaha YZ125 models. The retail price is $859.95. One caveat: It requires some grinding on the center cases. It is available through your local Yamaha dealer.

A: There will come a time when every manufacturer, race promoter, rider and AMA functionary will rue the day that the AMA allowed 250cc four-strokes to compete against 125cc two-strokes (not to mention the stupid unleaded gas rule that administered the coup de grce to the 125 two-stroke on the AMA circuit). You may think that the MXA wrecking crew is being melodramatic, but listen to our reasoning for mourning the downgrading of the 125 two-stroke:

(1) Entry-level. Not every person riding a motorcycle needs or wants a complex, heavy and expensive starter machine. With the 125cc two-stroke, the sport had an affordable, repairable, entertaining bike that neophytes could use to gain admission to the sport.

(2) Cost. With very few moving parts, a two-stroke is cheaper to build and to maintain than a thumper.

A: You had better be easily buzzed. But before we tell you what changes Yamaha made, let’s spend a little time delving deep into the history of the YZ125 R&D by going back to the genesis of the 2012 YZ125. Here is a compendium of YZ125 mods from 2005 up to today. A: The 2005 Yamaha YZ125 is the acorn from which the 2012 YZ125 tree has grown. The 2005 YZ125 engine was all new (sharing only the kickstarter and clutch plates with the 2004 engine). It was smaller, lighter and faster. Yamaha ditched the domed piston for a flattop piston. They shortened the connecting rod by 3mm. They raised the exhaust port 0.5mm. They tilted the engine forward 7.5 degrees so they could straighten the intake tract from 16 degrees off-center to 5 degrees, which was a big deal. The coolant port on the head was changed because of the engine tilt. The water-pump impeller was changed to plastic, and the shaft was 4mm smaller. The clutch actuator arm was relocated inside the ignition cover. The transmission went from five to six speeds. The exhaust pipe got a straighter initial section.

The 2005 YZ125 got the plug-and-play aluminum frame. There wasn’t a single tube on the 2005 frame; instead, it used forgings, castings and extrusions. The 2005 Yamaha YZ125 frame was 4-1/2 pounds lighter than the 2004 steel frame. The bike weighed 197 pounds and got Honda-style brake routing and 7/8-inch Renthal aluminum bars for the first time.

The Kayaba forks were copies of Showa’s Twin-Chamber forks. We called them “Showabas.” The Showa features were the dual chambers, top-mounted compression adjuster and one-piece outer tube. Age related: The design has a few years on it, but it’s still modern.


A: On the 2006 engine, the shape of the combustion chamber’s squish band was radiused out to the edge of the band. The carburetor got one less bypass port and a new 6BFY42-74 needle. A stiffer power-valve governor spring made the valve open at 9500 rpm instead of 9000 rpm. The ignition got a new CDI mapping and an NGK BR9EVX platinum-alloy plug.

The greatest change in YZ history came in 2006 when Yamaha introduced its SSS suspension components to replace 2005’s Showabas. With SSS (Speed Sensitive System), Yamaha’s suspension went from 30-percent speed-sensitive damping to 90-percent speed sensitive. As for the shock, it was as close to a works shock as any production bike had ever come. It had an 18mm shock shaft instead of 16mm, Kashima-coated internals, a 30-percent-larger reservoir and a titanium shock spring.

A: Yamaha made five changes to the 2007 YZ125.
(1) The fork stanchion tubes were tapered into a thinner midsection, and new damping was added.

(5) The silencer’s perforated section was shortened by 75mm (with the remainder of the core constructed from non-perforated stinger) to improve throttle response without increasing sound. A: For 2008, Yamaha made eight changes to bring the YZ125 into closer compliance with the YZ250F four-stroke. The 2008 YZ125 got the front brake caliper, fork stanchions, lower fork bracket and chain guide from the YZ250F. A new reed valve was added. The front master cylinder piston was made 1.48mm smaller, while the brake lever was positioned higher on the master cylinder and 9mm farther from the handlebar.

There were some notable weight savings in that the front brake caliper was 220 grams lighter, the wave-style brake rotors were 140 grams lighter, and the fork stanchion tubes were thinned again (and weighed 200 grams less).

The Kayaba SSS fork spring rate was upped from 0.41 to 0.42 kg/mm, and the fork stanchions were made 4mm shorter.

A: Yamaha made several changes to the 2011 YZ125 model to make it conform to the world-wide global spec, so that they could sell the same model in every country. This is a money saving move, not an improvement. The global-spec changes were limited to a 75mm-longer silencer, with its core increased from 27mm to 30mm, and 71.5 percent more glass wool packing. Additionally, the 410 mainjet was exchanged for a 430, while the 6BFY42-3 needle was swapped out for a 6BFY43-3 needle (the needle and jet came as options in the tool kit in 2010).

A: Stupendous. Yamaha’s Kayaba SSS settings are excellent in their own right. The YZ125 has benefited from the advances that Kayaba has made on the YZ250F forks. Plus, with significantly lighter overall weight, the Kayaba SSS suspension works better on the YZ125 than on the 218-pound YZ250F. 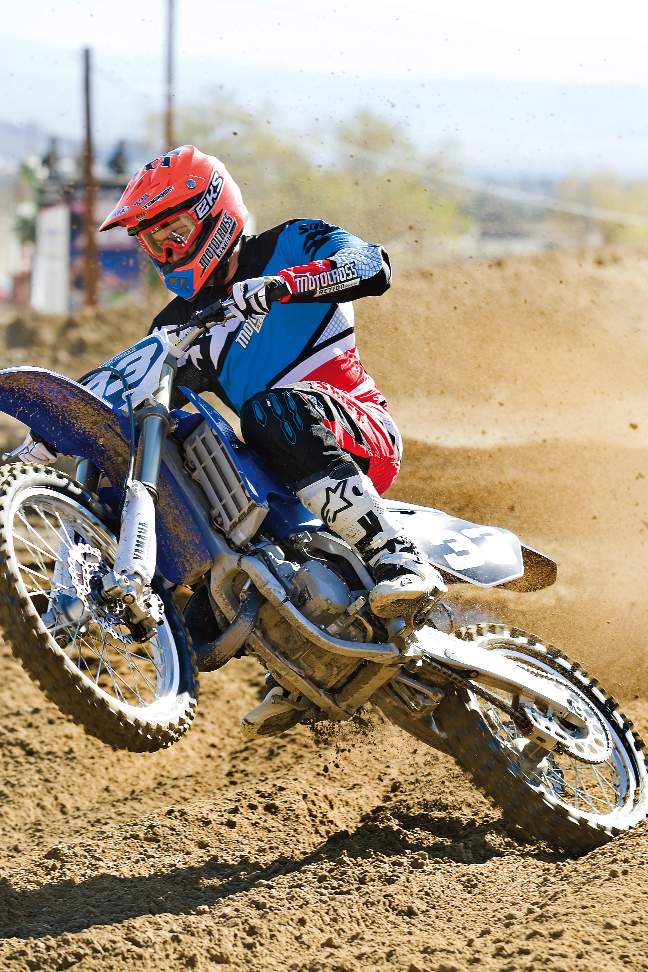 Coney Island: There are lots of things that are fun, but rarely do they combine noise, vibration, flying dirt and big grins. Riding a YZ125 offers all of those things and more.

(1) Looks. We don’t mind riding an underdog machine against the new iron, but we hate that it looks ancient. UFO is going to be importing a kit soon that will include the current YZ250F style number plates, radiators wings and front fender for the two-stroke YZ’s. why couldn’t Yamaha have done this three years ago?

(2) AMA rules. If the AMA wanted to help the motorcycle industry, make it easy for young people to enter the sport, ease the transition from 85s to big bikes and have more entertainment value at the AMA 250/450 Nationals, they should drop the WMA Women’s National class and institute an age-graded (16 to 19-year-old) 125cc AMA National class. This would be a low-cost development class that would feature relatively low-cost machines that don’t require, as Mitch Payton has often pointed out, four times the money to make fast. Yeah, yeah, yeah, we know that Honda doesn’t make a 125cc two-stroke, but somehow they managed to get a CRF150 class into several of last year’s AMA Nationals even though no one else makes a 150cc four-stroke motocross bike. The 125cc National class would be for companies that do make 125s, which would include Yamaha, KTM, Husaberg, TM and Husqvarna

(4) Weight. At well under 200 pounds, the YZ125 is 19 pounds lighter than a YZ250F. Weight is important to consider when many young riders aren’t strong enough to lift their own body weight.

(5) Entry-level. Heavy, complex and expensive 250cc four-strokes are not the best machines to start a racing career on. A 125cc two-stroke is the perfect size for a minicycle transplant. Last year the YZ125 got a 75mm-longer silencer, with its core increased from 27mm to 30mm, and 71.5 percent more glass wool packing.

A: The 2012 YZ125 two-stroke is a bike that teaches bike-handling skills, throttle control and race savvy. It is the optimal vehicle for a neophyte to learn the ins and outs of motorcycle racing on. In comparison to the 2012 KTM 125SX, the KTM is faster and torquier, while the YZ125 has better suspension. We think the handling nod goes to the KTM, but the YZ125 is a bulletproof design, thanks to six years of refinement. Which would we pick? It depends on how rough the track is.

MXA’S 2012 TM MX250-2T MOTOCROSS TEST: THERE IS NO TWO-STROKE MOVEMENT; THIS BIKE DOESN’T EXIST; IGNORE THE MAN BEHIND THE SCREEN