WHERE DOES HUSQVARNA STAND NOW THAT BMW SOLD THE BRAND TO KTM?

A: We wish we knew, but KTM will not reveal all its plans for Husqvarna until later this year. As for BMW, they bought Husky right before the recession hit, and then tried to recover some of their investment by turning the iconic offroad brand into a gimmicky street bike brand. KTM’s known plans for the Swedish brand are to bring Husky to Austria (keeping the Italian factory for parts supply for older models).

Q: WHERE DOES THIS LEAVE HUSABERG?

A: How did Husaberg get into this conversation? When Husqvarna was sold to the Castiglioni brothers of Cagiva fame, the ex-Husqvarna engineers in Sweden decided to pool their resources and build their own brand. That brand, Husaberg, forged its own path for many years, but was eventually bought by KTM. Sadly, over time, the Swedish-ness of Husaberg was lost as more and more of the production was moved to KTM’s Austrian factory. Today, Husaberg’s doors will be closed after this year and merged into a new Husqvarna enterprise. 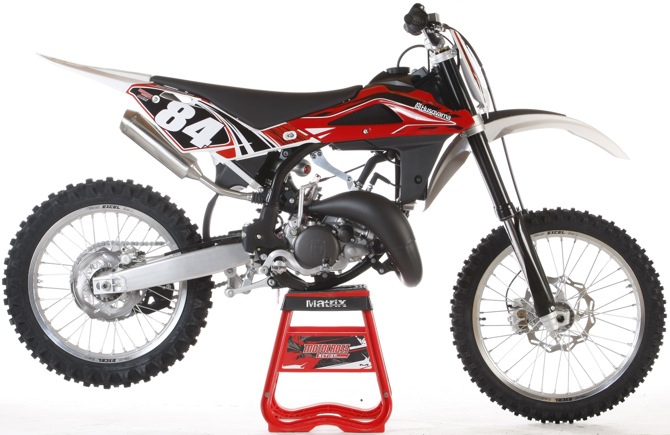 The question is whether Husqvarna will suffer the same fate as Husaberg ? which was to remain autonomous for a few years before just becoming a KTM in different colored plastic. We won’t really know until 2014 (more accurately until October of 2013).

A: Yes, but there is little that Husqvarna does with its two-strokes that KTM doesn’t do better. As far as engines go, BMW insinuated that anything they developed will go back to Germany with them. This isn’t a great loss, because it probably only applies to the ill-fated, Taiwanese-built, TC449 engine and the 650cc Terra and Strada street bike engines. That leaves Husqvarna with the promising TC250 four-stroke engine, which has already undergone R&D upgrades for 2014, and the aging fleet of old-school 125cc, 250cc and 300cc two-stroke engines.

Rumors persist that Husqvarna has a fuel-injected two-stroke engine hidden in the factory’s R&D department, and the same rumors are circulated about KTM. The KTM EFI two-stroke does exist, but isn’t going to be released until the market or environmentalists demand it. Perhaps the new KTM owners could reinvent Husqvarna with some modern smokers. Apart from that, we don’t see any future for the current Husqvarna CR125/144 engine package. 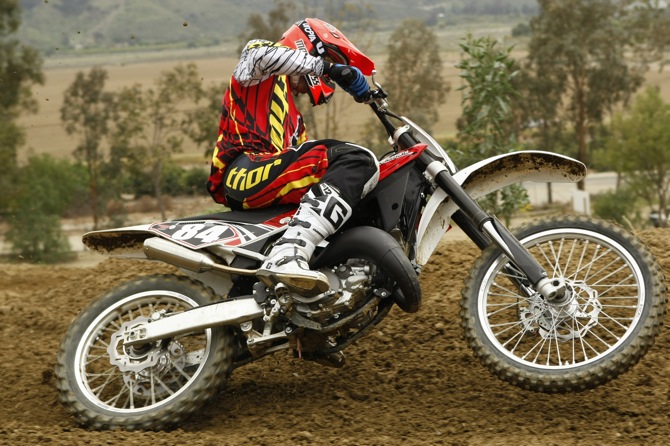 2013 Husqvarna CR125: Over the years Husky has passed through the hands of several owners, but they just keep ticking along. Recently bought by KTM, the CR125 will still exist in the future.

A: The smartest thing Husqvarna did was to include a 144cc top-end kit with each CR125 sold. When you buy the bike, your friendly local Husky dealer hands you a box with a big-bore cylinder, head, piston, rings, power valves, jets and gaskets.

Ten years ago, turning your bike into a 144 would have been considered cheating, but in today’s four-stroke era, a 144 is often the best option for a racer. We tested the Husky as a CR125, but we sent the 144cc kit to Pro Circuit to have it ported and milled for a project bike story for next month’s issue. 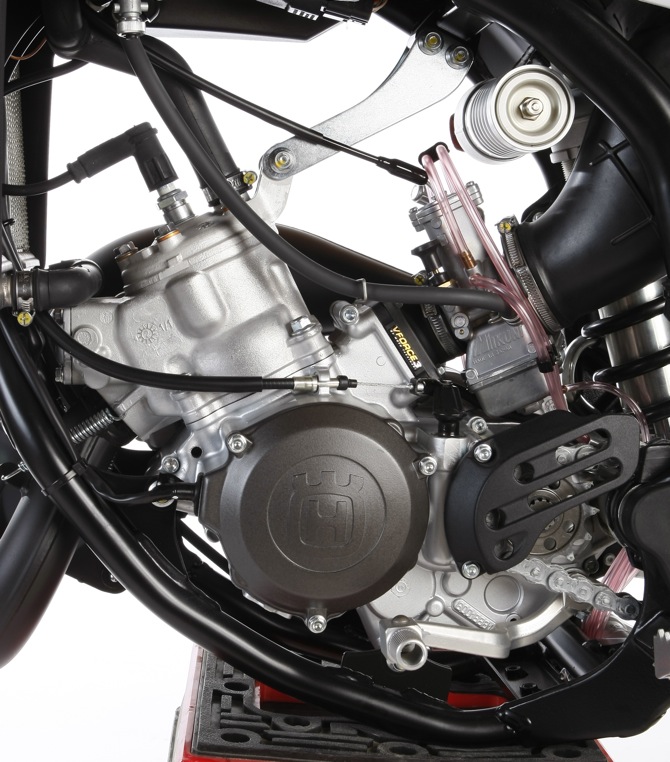 Two-story house: It is hard to believe how much room exists inside the Husqvarna CR125 frame. If this were a four-stroke there wouldn’t be enough room for a sliver of tin foil.

A: As old as some of the CR125 parts are, the engineers in Varese, Italy, have been making upgrades.

2011 : In 2011, the Husqvarna CR125 got a modified frame with a streamlined engine cradle. It also got new motor mounts and matching cylinder-head fittings. The 2011 model also got a water-resistant, air-filter housing and updated 48mm Kayaba forks.

2012: As mentioned, the U.S. version of the CR125 started coming with the 144cc kit in the box in 2012. This bumped the displacement from 124.8cc to 144cc (via an extra 4mm of bore). Additionally, Husqvarna reinforced the steering-head area of the chassis with gussets and switched to a black frame, silver Excel rims and new graphics.

2013: For 2013, the CR125 got black grips, a new handlebar pad and updated graphics?although not Bold New Graphics. 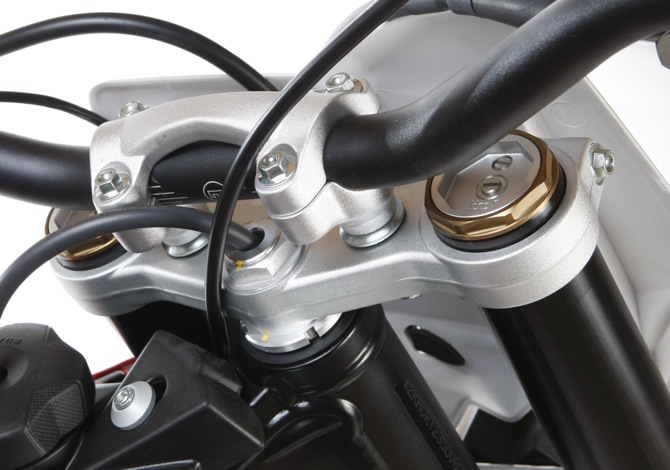 Q: HOW WOULD WE DESCRIBE THE HUSQVARNA CR125 POWERBAND?

A: The CR125 has a small window of peak power, and staying in that window is the secret to going fast. We give the CR125 engine credit for trying to run across a broad range of power, but it falls short. The only person who would love this powerband is a hard core, highly skilled sugar freak who could keep the throttle pegged and his left foot twitching. Ridden flat out, it is a fun bike. Ridden half-heartedly, it is frustrating. Every tester was tempted to shift early, but learned it was best to wait a split second longer than his first best guess. The sweet spot is way up there.

Are you looking for a broader powerband? Open up the box that came with your CR125 and install the 144cc kit. Problem solved. 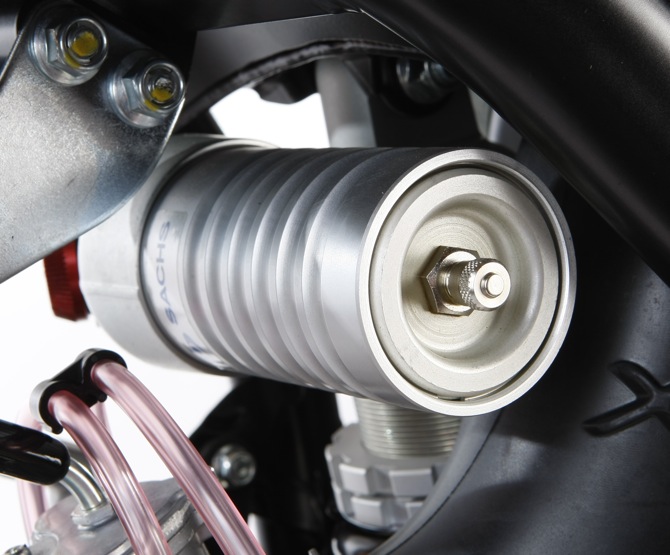 Q: HOW DOES IT RUN ON THE DYNO?

A: The Husky CR125 is a neutral-handling chassis. It turns decently, tracks straight and doesn’t exhibit any oversteer or understeer. It isn’t the kind of bike you rave about, but you won’t whine about it either. There is no doubt that suppler forks, a lower seat height and a broader powerband would help, but “as is,” the MXA test crew liked it. 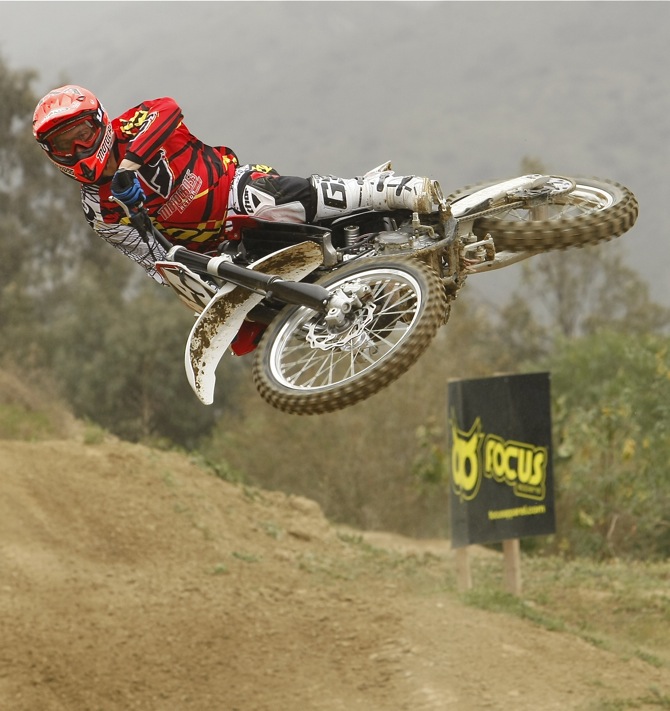 A: It is better than we thought it would be, given that it is an odd Kayaba/Sachs combo. The front forks are Kayaba forks from a Yamaha of undetermined vintage (we’d guess 2007), but they aren’t up to Yamaha performance standards. The overall fork settings are on the firm side, with a considerable amount of spike about two-thirds of the way into the stroke. Lightweight test riders lowered the oil height by 10cc to move the spike further into the stroke. If you are under 150 pounds, you should consider the next lightest spring rate, which would be a 0.41 kg/mm. It should be said that having the forks revalved to Yamaha specs is a good idea.

As for the shock, Sachs has come a long way in a short time. Although the number of suspension shops in the U.S. with any Sachs experience is limited, the Sachs shock performed well?aided by the CR125’s light weight. 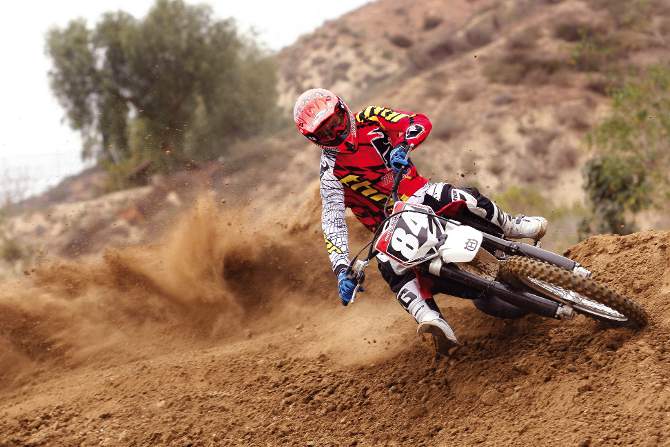 Necessity: If you want to go forward, you need to twist your wrist backward. This engine rewards stupidity.

Q: HOW IS THE GEARING?

A: Initially, we were very confused by the tall gearing on the CR125. European brands are known for their tall gearing, and the 2013 Husky CR125 plays to type. It might be able to pull this gearing with the 144cc kit installed, but with the narrow 125cc powerband, finding the right gear is a conundrum. Our advice is to swap the stock 13/50 combo for a 13/51, stay in second gear in the turns, and get on the pipe much earlier to grab third.

A: The plastic is so brittle that during our test we broke the front fender, front number plate, both fork guards and the lower radiator winglets. It should be noted that we didn’t break the plastic in a crash; it either broke of its own accord or was cracked by roost. We’ve never seen this on any other bike, but it has happened with every Husqvarna we’ve tested. We put older model KTM fork guards on the forks?they fit perfectly. As for the front fender and front number plate, we replaced them when they broke.

Q: WERE THERE OTHER ISSUES WITH THE HUSKY PLASTIC? 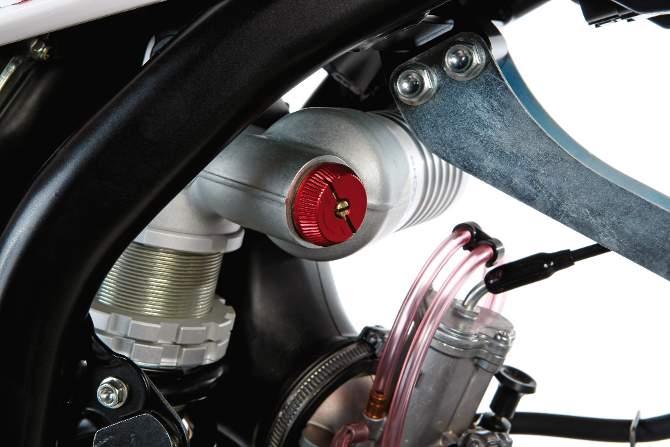 Shocker: The German-made Sachs shock is a mystery to most American hop-up shops, but internally it is not that different from Showa or KYB.

(1) Gas cap. The rubber seal can pop loose. If it falls out completely, it will cause a major leak; and if it falls part way out, it could cause the cap to cross-thread.

(2) Rear fender. It kicks up on the end. Why does that bother us? Because we hit our boots on the upswept part every time we got on board.

(3) Plastic. We know that Husqvarna doesn’t make the plastic, but they need to switch suppliers. This stuff is fragile.

(4) Brake pedal. We have had issues with the casting on the rear brake pedal in the past. It is long and can easily get bent or broken. Invest in a brake snake.

(1) Big-bore kit. Throwing in a bigger cylinder, piston and rings is a great marketing ploy. It gives you a complete rebuild without having to spend extra cash.

(3) Room. There is so much extra room in the engine compartment that you can easily access the engine, carburetor, spark plug and rear shock without cramping up.

A: For motocross to grow, the sport needs more 125cc two-strokes. They are great entry-level machines, both from a riding and a maintenance standpoint. The 2013 Husqvarna CR125 is a budget racer. It’s not the best 125 you can buy, but its versatility, charm and uniqueness make it worth considering.

This is how we set up our 2013 Husqvarna CR125 for racing. We offer it as a guide to help you get your own bike dialed in. 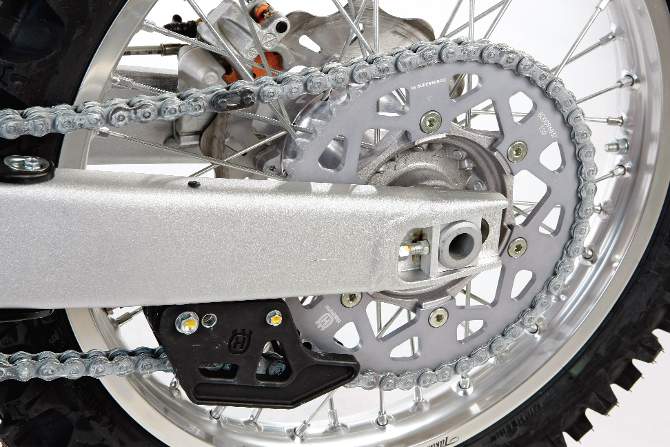 Tooth fairy: With the 144cc top end, it has the power to pull the stock gearing, but not by much. As a 125cc, you need to add teeth.

KAYABA FORK SETTINGS
Here is what MXA ran for hard-core racing (stock settings are in parentheses).
Spring rate: 0.43 kg/mm
Oil height: 342cc (352cc)
Compression: 15 clicks out (12 out)
Rebound: 8 clicks out (6 out)
Fork-leg height: 4mm up from capNotes: If you are on the lighter side, you might want to lower the fork-oil height by 10cc. 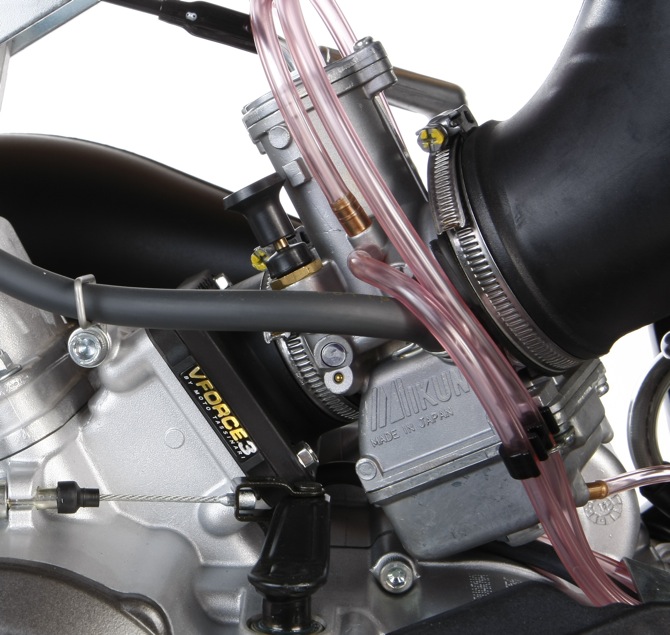 Buried treasure: What is this? Was it found in a Spanish galleon? Nope. This is a Mikuni carburetor. It does all the things fuel injection does, only without a computer.

HUSQVARNA CR125 JETTING
On a cold day, with a Pro-level test rider wringing out the bike, the CR125 pinged a little. We considered going one richer on the main, but found it easier to just keep Pros off the bike?because it didn’t ping in the hands of Vet, Novice and Intermediate riders. If you are going to push this bike to its limits, consider a 50/50 mix of pump gas and race fuel or a bigger main. Overall, the 2013 CR125’s jetting was in the ballpark. Here are the stock specs for the Mikuni TMX 38mm carburetor:
Mainjet: 460
Pilot jet: 35
Needle: 6BFY43
Clip: Third slot
Air screw: 1-1/4 turns out
Leak jet: 80
Notes: Make sure you listen for pinging, because we have seen Husky CR125s seize with the stock jetting when poor-quality gas is used.

THIS WEEK’S LIST OF LUONGO’S GRAND PRIX RULE CHANGES: 10 THINGS YOU REALLY NEED TO KNOW IF YOU LIVE EAST OF NOVA SCOTIA