MXA’S 2014 KAWASAKI KX85 MOTOCROSS TEST: KAWASAKI IS STEPPING UP IN THE MINI CLASS TO MEET THE CHALLENGE POSED BY KTM

Q: FIRST AND FOREMOST, WHAT’S ALL THE COMMOTION ABOUT THE ALL-NEW 2014 KAWASAKI KX85?

A: The KX85 has been roughly unchanged since 2002. Since that time, the bike has won the majority of the Amateur Nationals, with no other bike brand coming close to its dominance—until now. KTM’s 85SX has been blowing the doors off the competition. Kawasaki stepped up to the challenge, went to work and developed the all-new 2014 KX85 (and a KX100).

Q: WHAT WAS THE MAIN FOCUS OF THE KAWASAKI ENGINEERS?

A: The engineers at Kawasaki knew where the KX85’s weaknesses were, and they tackled the problem areas with gusto. The biggest complaint over the years has been the lack of pony power. So, the KX engineers overhauled the entire engine from top to bottom. Additionally, the KX85’s antiquated look was revamped to replicate its bigger KX250F and KX450F brothers. The eye-catching new curves look great and improve the ergonomics of the bike. The KX85 was given black accents throughout the lime-green layout. Both the front and rear suspension were upgraded with new settings for more adjustability.

The question? Was the renovation enough for the bike to jump to the top of the 85cc heap? New blood: Virtually unchanged since 2002, the original KX85 riders are now in their 20s. The 2014 KX85 is the improvement that they were waiting for.

A: Cylinder. The Nikasil-plated cylinder is where the most significant changes were made to improve the overall performance of the KX85. Increasing the flow through the cylinder of a two-stroke is the easiest way to up the horsepower. The KX85’s exhaust port has been reshaped, along with a 1mm increase in port diameter (from 32mm to 33mm). With the exhaust port dramatically changed, the KIPS power valve was also redesigned with independent, non-unitized sliders on each side of the exhaust port. The new KIPS is easier to work on than the old three-piece design, plus the thicker power valve faces aid in port sealing.

Head. The KX85 head has a new squish area with a 2-degree-narrower angle and shallower combustion chamber. The head gasket has a 0.09mm-larger bore surface height, along with a second dowel pinhole that is inserted to ensure proper alignment and closer tolerances.

Piston.  The 2014 piston gets a single ring for less friction, along with a longer piston pin.

Carb. Atomization is handled by a 28mm Keihin PWK with a crescent-shaped slide. The needle has been relocated closer to the intake for better fuel delivery.

Crank. The resin stuffer that fills the gap around the crankshaft pin has been enlarged to reduce crankcase volume. This enhances the charge pressure into the transfer ports. The crank itself is now 83mm (2mm larger than in 2013).

Radiator. Since the Kawasaki engineers increased the power output, the engine temperatures have also risen. Although still equipped with a single, right-side radiator, the new aluminum core is taller and wider. The cooling capacity has been increased by 52 percent. 2014 Kawasaki KX85: If you think this bike looks familiar, that’s because it is familiar. The styling of the KX85 was borrowed from its bigger brother, the KX250F.

Q: WHAT ELSE IS NEW ON THE LITTLE KWACKER?

A: Suspension. The 36mm, upside-down forks have been updated with the same accumulation shim-type valves as the bike’s bigger brothers, and the overall length has been shortened 12.5mm to reduce weight and under-hang. The compression adjustment has been upped from 18 to 20 clicks. The shock spring is 150 grams lighter, and the shock body has been anodized black to reduce heat. The shock’s compression adjustment has been radically changed, going from 4 to 24 clicks, with the rebound going from 16 to 21 clicks of adjustment.

Brakes. For 2014, the KX85 gets cauliflower-style brake rotors (220mm up front and 184mm rear). Additionally, the front brake hose is now routed behind the front axle for more protection.

Handlebars. The updated 2014 KX85 has seen handlebar changes to help the rider feel at home. These improvements include six-position handlebar mounts and optional risers that can raise the bars from stock to 5mm or 10mm taller. The steel handlebars are 24mm wider and 22mm taller.

Gas tank. On previous KX85s, the seat would ramp up onto a more bulbous fuel tank. For 2014, the gas tank is flatter and 20mm lower at the gas cap. This makes the transition much smoother, which allows the rider to slide back and forth with ease. The seat height is the lowest in its class at 32.7 inches. The larger KX100 sits at 34.3 inches.

Aesthetics. Revamping the KX85’s styling was a must, since it has looked the same for over a decade. The KX85 designers used the KX250F and KX450F for inspiration. They changed the rims to black, the fork caps to blue, and added reshaped shrouds, number plates and fenders. Puff: The carb settings have been updated for smooth sailing.

A: For a totally revamped machine, Kawasaki has kept the price fairly reasonable—it is only $300 more than the 2013 model. The price has jumped from $4049 to $4349. This is more expensive than the other Japanese minicycles that have gone unchanged for years. The Suzuki RM85 retails for $4149, while the Yamaha YZ85 is $3900; however, Austrian-based KTM has been selling bikes like hot cakes due to their constant investment in new technology, but the price of a KTM 85SX may shock you at $5349. Not to mention the limited-edition KTM 85SXS, which retails for $5999. 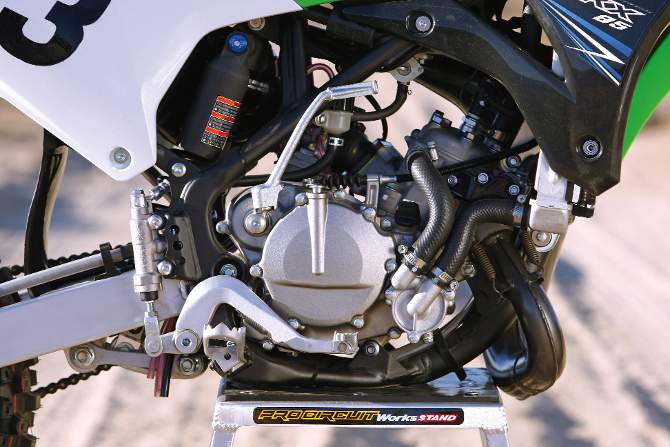 Teeth: The powerplant is like a tamed lion, but it can bite.

A: There are four major differences between the two green minis.

(3) Wheelbase. The KX100 has a 4-inch-longer wheelbase by virtue of a longer swingarm (to make room for the larger rear wheel). It also sits taller and has a 1/2-inch more trail and a 2-degree-slacker head angle.

(4) Weight. Because of the longer swingarm, bigger wheels and heavier tires, the KX100 weighs approximately 15 pounds more than the KX85. More teeth: The gearing works great for all skill levels.

A: There is a substantial horsepower improvement across the board when compared to the 2013 model. On the dyno, the 2014 model was 17 percent more powerful than last year’s model. Horsepower jumped from 18.79 horsepower to 22.68 horses. Torque also improved from 9.20 to 10.02 foot-pounds.

The KTM 85SX makes 2 horsepower more than the KX85, and the KTM makes more power from 8000 rpm to 12,400 rpm. Yes, that is a big deficit for the KX85 to make up, but dyno numbers are just stats—they don’t always tell the whole story. The KTM’s aggressive midrange hit will hinder most Novice riders. By comparison, the KX85 has excellent throttle response off the bottom and is linear throughout the powerband. This makes it much easier for young riders to manage. The KTM 85SX has the potential to go faster than the KX85 in the right hands, but the Kawasaki KX85 isn’t sucking wind on the track. Its metered power makes it easy to ride for all ages and skill levels. Lockdown: The brake rotor has been upsized for 2014.

A: Surprisingly, Kawasaki didn’t change the KX85’s steel perimeter frame (apart from reinforcing some gussets to make it more rigid). This isn’t a bad thing. The Kawasaki engineers felt that the handling on the KX85 was always one of its best traits, and they didn’t want to throw the baby out with the bath water. The high-tensile steel perimeter frame has a consistently balanced feel around the entire track. Q: WHAT DO WE THINK ABOUT THE KAYABA SUSPENSION?

A: Selecting OEM production suspension is a cost-versus-benefit decision. If a manufacturer is willing to spend more money, Showa and Kayaba are capable of supplying infinitely better components. But, it goes without saying that works-style suspension components can easily cost more than the rest of the bike.

Kawasaki didn’t bust the bank for the 2014 KX85, but they definitely upgraded the Kayaba forks with the switch to accumulation shim-type valves. We were surprised that the KX85 forks didn’t get adjustable rebound damping. We do applaud the Kawasaki engineers for broadening the rear shock-compression adjustment from four clicks to 24 clicks (with a 4 percent range per click). (1) Handlebars. Kawasaki needs to up the ante to higher-quality handlebars. We weren’t opposed to the stock bend, and the new height and width fit a larger range of riders, but one tipover and these things will be toast.

(2) Rebound adjuster. Customers like to have options. They like to know they can make the necessary adjustments if need be without having to tear the forks apart. (1) Engine. Not only did it beat out the 2013 model with a massive power increase, it also won us over with its superb power delivery.

(2) Style. This bike definitely gets five stars for style. Updating the design to make it look like the KX250F and KX450F makes good marketing sense.

(3) Suspension settings.The base settings of the stock suspension are good right out of the box. The suspension is plush on the top of the stroke, and then ramps up through the stroke to fight bottoming.

Q: WHAT DO WE REALLY THINK?
A: First and foremost, we would like to applaud Kawasaki for finally updating their venerable, but ancient, KX85. Sadly, the minicycle market has stagnated for years—and in some cases decades. It seemed as though the “Big Four” were abdicating the lead in the 50cc, 65cc and 85cc classes to KTM. Kawasaki woke up from their long R&D sleep to fight back. Kudos.

WHERE HAS MOVIN’ MARV BEEN? WHEN WILL MUSQUIN BE BACK? WILL HE BE AT GLEN HELEN?

MOTOCROSS ACTION AMA RULE OF THE WEEK: CARBON FIBER GAS TANKS ARE LEGAL — WHO DOES THAT FAVOR?