A: The easy answer is no. Most of the changes that KTM made to the 2014 125SX were chassis, durability or cosmetic changes. A: The technical specs are as follows: A: There is really only one significant change. After a couple years of using Moto Tassinari VForce reeds, for 2014, KTM switched to Boyesen RC2 performance-weave carbon fiber reed petals housed in a KTM-designed reed block. We use the word “designed” loosely here, because the KTM reed block mimics the VForce with its twin Vs and eight petals.
As a word of note—we used to have issues with the jetting (too lean), cranks (tended to seize) and the cylinder heads (they actually broke into pieces), but over the last five years KTM has done a good job of fixing all of our old issues. There were five brand-specific updates on every 2014 KTM, and they are as follows: (1) Front brake.
While the front master cylinders on the 125SX, 150SX, 250SX, 250SXF, 350SXF and 450SXF got new front-brake reservoirs, reshaped levers and smaller-diameter pistons (down from 10mm to 9mm), the 125SX and 150SX are the only Katooms still using Magura hydraulic clutches (the rest have Brembo clutches).

(2) Seat foam.
The foam core of the saddle has been reformulated to be softer initially but not break down as quickly—at least that’s what the brochure says.

(3) Gas cap.
The internal threads on the gas cap have been reworked for more positive engagement, and the gas cap has a new low-profile shape—it doesn’t stick up as high as last year’s cap.

(4) Swingarm.
KTM lightened the chain guide by 120 grams and beefed up its swingarm brackets.

(5) Plastic.
For 2014, the graphics on the shrouds, airbox cover and side winglets are permanent in-mold decals. Hanger on: The nylon silencer bracket is awesome.

A: In essence, the KTM 125SX and 150SX share everything save for the obvious engine parts. Here is the list:

(4) Parts.
The crankshaft, cylinder, piston, power valve and rings are different on the 125SX and 150SX.

(6) Jetting.
Last year, the 125SX and 150 shared the same jetting specs. This year, the mainjet, pilot, needle and clip position are all different.

A: Given that 125cc two-strokes have the least horsepower of any full-size motocross bikes, they are at a disadvantage in deep loam, big jumps and head-to-head races against bigger engines. Yet, horsepower isn’t the be all, end all of motocross, which is why you occasionally see a Vet on a 125 two-stroke run down a pack of 450-mounted competitors. Still, in most cases, there is no replacement for displacement. Given that scenario, you have to wonder why every MXA test rider preferred to race the 125SX instead of the much more powerful 150SX. Their answers to that question were telling: “The 125 engine is more fluid.” “It carries its speed better from gear to gear.” “It’s not faster in a drag race, but it can go faster from corner to corner.”

On the dyno, the 125SX peaked at 34.66 horsepower. That is a very respectable number for a 125 tiddler, but in a world dominated by 40-plus-horsepower 250 four-strokes, that 6-horsepower deficit translates into back-of-the-pack starts against 250Fs. Q: WHO IS THE TARGET AUDIENCE FOR THE KTM 125SX?

A: The 125SX is custom-made for a rider fresh out of the minis who wants a bike that is light enough to pick up if it falls over, cheap enough to race on a budget, simple enough to repair in the garage and fast enough to have fun on.
In all honesty, every MXA test rider who has kids, from Larry Brooks to Lars Larsson to Alan Olson, made their offspring spend a season or two on a 125 two-stroke. Why? They believed that the skills needed to navigate a track successfully on a 125 would teach their youngsters more about riding than 10 years on a four-stroke. They wanted Junior to learn throttle control, how to shift, what a clutch is for, the best ways to carry speed and how to make smart strategic moves. They felt that their kids would learn the craft better on a bike that had to be raced to the nth degree.

Sadly, most parents don’t have the money to buy a bike that is just a stepping stone to the 250 four-stroke. Plus, they don’t want little Johnny to be at a disadvantage in the 250 Novice class. That simple fact means that the ultimate buyer of a 125cc two-stroke is a rider whose local racetrack still has a 125 two-stroke class. The truth of the matter is that a 125 is only competitive against another 125, given equally talented riders. 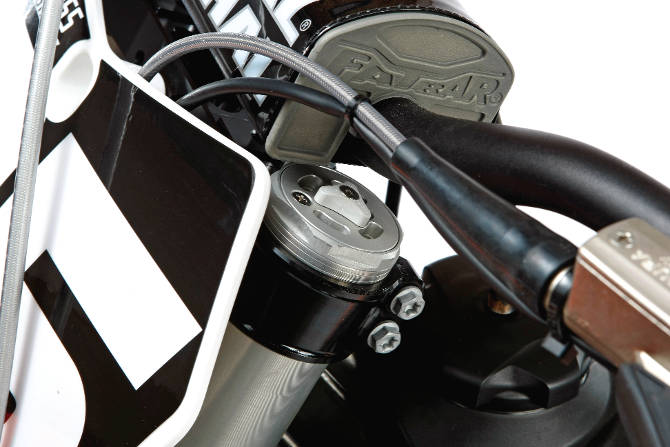 Clicker: See the clicker? It doesn’t have a good setting.

Q: WHAT MODS SHOULD EVERY KTM 125SX RACER MAKE?

A: Given the young and neophyte nature of the 125 consumer, we don’t think that it is wise to spend a bundle hopping up a 125 two-stroke. Given our druthers, we would save the money for new pistons, tires and clutch plates.

What would we spend money on? We would swap the stock sprocket for a one-tooth-larger rear cog (and even think about adding two teeth for tight, Supercross-style tracks). Aftermarket exhausts aren’t going to make a KTM 125SX blow by a 250F on the track, but they will broaden the powerband and make the bike easier to keep on the pipe. Although we think running race gas in the Novice class is a waste of money, we are still very picky about what we run in the KTM 125SX, based on previous bad experiences. We run fresh 91-octane pump gas with a dash of VP C12 added as a precaution. Warning: Check the spokes constantly and the rims will last.

(1) Preload ring.
We don’t get it. Preload rings should be made of the hardest metal known to man, not gummy bears.

(2) Rims.
The telltale sign of a wobbly rim is a loose spoke next to the rim lock. The rims are cheap and exhibit their chintziness at the spoke nipples. Check them constantly.

(3) Gearing.
The stock gearing is best suited to the Bonneville Salt Flats.

(4) Seat foam.
It gets softer with every ride—and it isn’t all that firm to begin with.

(5) Forks.
You gotta be doing something wrong to make 125 forks feel harsh.

(6) Gas cap vent hose.
KTM’s vent hose gets twisted in a knot when you remove the cap. We drill a hole in the fork steering-stem cap to slip the vent hose into it or order a Works Connection stem cap hat has the hole already in it. With the vent hose in the center of the steering stem the vent hose can spin with the gas cap. Fun factor one-two-five: Thanks to its tiny size, modest horsepower, light weight and all-or-nothing throttle demands, the KTM 125SX is a thrill ride.

(2) Front brake.
KTM’s 260mm Braking rotor and Brembo caliper can bring the 240-pound 450SXF to a screeching halt, so imagine what it can do to a featherweight two-stroke.

(3) Hydraulic clutch.
Honda, Yamaha, Suzuki and Kawasaki owners don’t know what they are missing. Although the feel is a little different, the clutch plates last three times longer than on a cable-controlled unit

(4) Price.
Four-strokes have many more parts and, as a function of retail pricing, you pay extra for each piece. Since a two-stroke has fewer parts, you pay less. Plus, you can do all the maintenance on a two-stroke engine by yourself with a butter knife and a nutcracker.

(6) Silencer.
We love the nylon hanger bracket that KTM uses to hold the silencer to the frame. Super cool. A: Here is an easy compatibility quiz. Step on a scale, then add your weight to the age you will be on your next birthday. If the number is greater than 160, look for another bike to ride. A 125cc two-stroke is a starter bike designed to bridge the gap between minicycles and big bikes. It is a great learning tool. This is how we set up our KTM 125SX for racing. We offer it as a guide to help you find your own sweet spot.

We don’t like these forks—never have, and it’s beginning to look like we never will. The big change for 2014 is to switch from last year’s softer 0.42 Nm fork springs to stiffer 0.44 Nm springs. The stiffer springs should have enabled the forks to be set up plusher, but that didn’t happen. These forks are jarringly harsh. Most MXA test riders prefer to lower the oil height by 10 to 20cc to try to improve the feel through the midstroke. Here’s what we ran in our 125SX (the stock settings are in parentheses):

Notes: Since most of the 125SX’s fork issues are valving related, we typically have the forks revalved by Pro Circuit, MX1 or MX-Tech. Featherweight: The shock spring is set up for fat-deficient people.

KTM made no valving, linkage or spring-rate changes to the 2014 KTM 125SX models. Here is what we ran (stock settings in parentheses):

MXA has always felt that the 125SX ran lean—so lean that we upped the mainjet from the stock 182 to a richer 185. Conversely, we took out the richer 42 pilot and put in a leaner 40. Jetting is more art than science, and in our experience, it is better to play it safe with the KTM 125SX jetting than to go for broke.

Here’s what we ran in our 38mm PWK (stock settings are in parentheses).

Notes:
For comparison purposes, the 2014 KTM 150SX comes with a leaner 180 main and a richer, triple-stage N1EJ needle. We prefer to play it safe with a richer main and the needle way up.

BOBBY HAS SURGERY: OUR FAVORITE RUSSIAN GETS A PLATE IN HIS ANKLE