The best known of the reverse cylinder engine is the Yamaha YZ450F. Although Yamaha has been slowly moving the cylinder closer to vertical, instead of slanted backwards,  it is still a reverse-cylinder engine.

Yamaha is the only modern motorcycle manufacturer producing a reverse cylinder motocross engine. It’s unique, creative, but mostly it’s different. The reverse cylinder of the 2010-2020 Yamaha YZ450F and  2014-2020 YZ250F may seem incredibly original, but that is not true — reverse cylinder engine are a very old idea. The MXA wrecking crew scoured our memories, and those of our grandfathers, to come up with a fair-to-middlin’ list of reverse-cylinder engines. We promise you that there are many more reverse cylinder engines produced over the years, but we focused on the most significant. The first example we found was the 204cc Opel Motoclub, It was a water-cooled, OHV, four-stroke with the cylinder turned around backwards. It was produced from 1922 to 1925. The Opel company would later specialize in automobiles. Designed in 1927, Engelbert Zaschka’s helicopter was a combination of an autogyro and a helicopter. In appearance, the Zachka helicopter looks like a typical airplane of the era, but the wing revolved around the fuselage of the plane. His motorcycle engine was equally unique. Three years later, in 1925, the German-built Orionette produced the 246cc TS model. The Orionette was a unique two- and four-stroke combined design that used the backwards cylinder designed by Engelbert Zaschka. One of the most famous reverse cylinder bikes of all-time was the 1939 DKW SS250. This split-single engine design had two pistons, a yoked connecting rod, a rear facing exhaust system and a single common combustion chamber. DKW had a long line of reverse cylinder bikes starting with the 1934 URe 250 and continuing on into 500cc versions. The first official production motorcycle by Honda was the 1949 Dream D. This 98cc two-stroke featured a reverse cylinder, two-speed transmission and stamped-steel frame. It’s 50mm by 50mm bore-and-stroke engine pumped out three horsepower at 5000 rpm. In 1951 Honda removed the reverse two-stroke engine and put in a 146cc OHV four-stroke. Equally important in the timeline of backwards cylinders was the 1960 MZ RE125. This East German road racer was designed by Walter Kaaden, the father of the expansion chamber. Kaaden’s water-cooled, rotary-valve, reverse cylinder design was copied by the Japanese when MZ’s Grand Prix rider, Ernst Degner, defected from East Germany with a complete set of Kaaden’s secrets. Degner defected from East Germany while leading the 1961 FIM 125cc World Road Racing Championship with only one race to go. Degner (with his wife and children) escaped from East Germany in the trunk of a car. Degner immediately signed a contract with Suzuki. According to sources, Degner arrived at the Suzuki factory in Hamamatsu, Japan, under the pseudonym of “Eugene Muller” taking with him some MZ parts (cylinder, piston, crankshaft and rotary-valve) plus some blueprints. Degner reportedly shared most of Kaaden’s ideas with Suzuki. This paved the way for the Japanese domination of small displacement motorcycle racing in the following decades. The most notable Kaaden-clone was the 1963 Suzuki RT63 road racer. Italian brand Guazzoni started making motorcycles in 1935, but hit pay dirt in the 1960s with a line of 50cc, 100cc and 125cc rotary-valve two-strokes that sold well in Italy. Very few Americans will remember the 1971 Guazzoni 125cc Mattacross, but it was one of the lightest motocross bikes ever built. Guazzoni went out of business in 1976 and founder Aldo Guazzoni died in 1978. 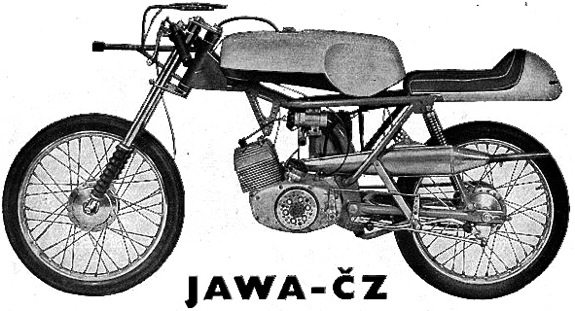 The maroon-tanked, rotary valve road racer is 1971 Jawa. The pipe exits out the back, the carb is on the side and the water enters the front. There is no water pump—this is a thermo-siphon design. CZ, Jawa and Tatran reverse-cylinder road racers were all the same basic bikes and came from the same factory from the mid 1970’s to the late 1970’s. The Tatrans were what the CZ’s were called in international road races. If they were red/white or blue/white, they were Tatrans, if they were silver, beige or maroon they were Jawas. In the early Sixties, the Japanese motorcycle industry was going through a tough period, and a number of the major manufacturers were destined to shut down. Bridgestone was able to survive, and in fact benefited from an influx of fresh engineers and designers (notably from Tohatsu) who transferred to Bridgestone when their original employers went bust. The outcome of this was a range of new models all powered by rotary-valve engines. The most successful racing version was the 1965 EJR-1 50cc water-cooled twin. Bridgestone is named after founder Soichiro Ishibashi (in English “ishi” translates to stone and “bashi” means bridge). Yamaha twin-cylinder TZ250 road race engine with the carbs underneath.

Yamaha itself is no stranger to turning the cylinders around backwards. The 1988 TZ250U twin-cylinder road racer had the exhaust pipes in the rear and the twin carburetors in the front. The cylinders were laid down so radically, that the carbs were only inches above the ground and inches behind the front tire. The ill-fated Cannondale MX400 stripped down to its skivvies. It had a backwards engine, with the throttle body at the front, but its packaging was ill-conceived and the MX400 never met expectations. The ATK version of the Cannondale MX400. In 2004 the Synergy Motorsports Q450 showed a reverse cylinder, 445cc, fuel-injected, electric-start, carbon fiber-framed four-stroke at the Indianapolis Interbike and Cologne Intermot shows. The bike never saw production and was mysteriously stolen from the show floor in Europe. In 2010 Ossa revealed a prototype 272cc reverse cylinder, two-stroke engine.  The fact that the Ossa TR 280i trials bike had an electronic-injection system enabled Ossa’s engineers to redistribute various parts without being constrained by the position of the traditional carburetor. “Sometimes the injection system has been put in the same place as the carburetor would have gone, with the fuel tank at the top of the bike, without considering the option of finding a new position for it. Ossa factory let me start from scratch and that was a determining factor in taking on this project,” says Ossa designer Josep Serra. The Ossa expansion chamber has a snail-like design. The air filter is in the white airbox behind the radiators.

Following the unveiling of Ossa TR 280i, Ossa came back two years later with the unique Ossa 250i/300i enduro bike. It not only had a reverse engine, but was a fuel-injected two-stroke. The world will have to wait a long time for a serious production models. because Ossa was bought by Gas Gas—who filed for bankrupcty and was bought by Spanish electric bike company Torrot, who themselves got in financial difficulty and were bailed out by KTM. Somewhere along the way, Ossa got lost in the shuffle. So you see, reverse cylinder bikes are not the sole possession of any manufacturer, but have a long and varied history.

MXA INTERVIEW: JUSTIN HILL EXPOUNDS ON HIS CAREER, TIME AT JGR AND HIS NEW HONDA FOR 2020 SUPERCROSS