The powers that be in our sport have forsaken the 125 two-stroke. They made it obsolete with rules that favored four-strokes by doubling the thumper’s displacement. But, the 125 is making a comeback. Not with a bureaucratic stamp of approval, but with homegrown enthusiasm for what motorcycle riding is supposed to be about—having fun.

Nothing can match the sound of a 125cc two-stroke at full-tilt boogie. Every shift snaps like a crack of lightning as the rider dances on the edge of the power curve. The tension of the rider trying to keep it on the pipe while using maximum body English to keep momentum up is visible. Best of all, if you rode your 125 perfectly for one lap, you probably felt like a king, because you were pretty sure that you couldn’t do it for two laps. Going fast on a 125 is like balancing on a high-wire in Swedish clogs—it can be done, but you pay for any mistakes.

Most riders from the two-stroke era have fond memories of racing a 125. There is something so visceral about going flat out; the experience sticks in your gut for a lifetime. The MXA wrecking crew wanted to feel those sensations again. So, we decided to build a full-race 2015 KTM 150SX. Why didn’t we build a true-to-life 125? Because we had a 150SX sitting in the workshop, and logic told us that a bird in hand was better than two in the bush. Plus, the extra 25cc would come in handy on jump faces. Most MXA test riders prefer to race the KTM 125SX over the 150SX because of how seamless the 125 works through the powerband. Where the 150 has an advanatge is when it comes to clearing jumps. Thus, it is 125 for speed and 150 for height.

It was not our intent to build a show-stopper bike. Everybody loves to look at garage queens, but when it comes to the dirty world of racing, we favor performance over exotica. And, we didn’t want to break the bank, which is so unlike us. We wanted a workhorse, not a unicorn.

Here’s how we did it.

(1) Cylinder head. We got an adjustable VHM cylinder head from TM importer Ralf Schmidt. This Dutch-made cylinder head has improved water ducts and provides better heat transfer. The combustion chamber can be changed for different compression ratios and squish zones. When we ran race fuel, we used the high-compression head, and for practicing and play riding, we used the low-compression head with pump gas. VHM even offers blank combustion chambers that you can mill to your own specs (or send them your specs and they will mill it for you). 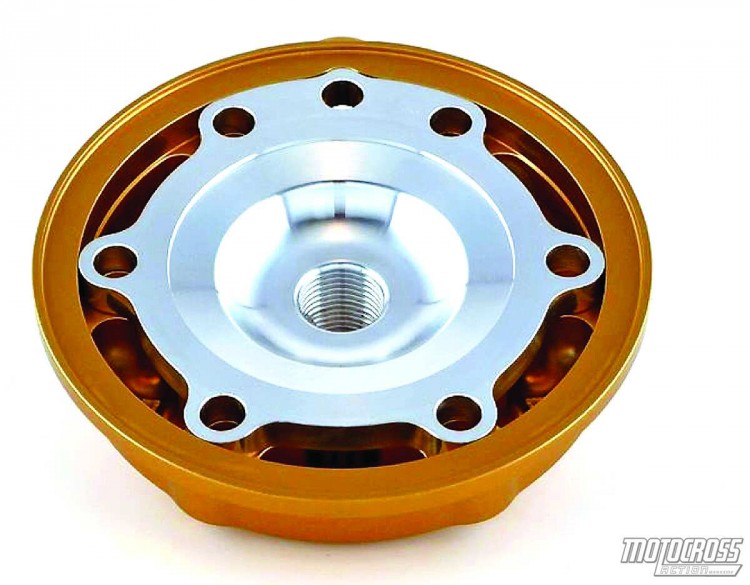 VHM’s cylinder head has two different combustion chambers that can be changed in minutes.

(2) Pipe. The 150SX powerband has more punch than the 125SX, but isn’t as fluid from gear to gear. The FMF pipe increased overall power and made the bike easier to carry speed on. Before adding the FMF pipe, it had a chunk of power; with the FMF pipe, it flowed better.

(3) Suspension. Amazingly, we left the WP components stock and worked with the available combinations. We set the rear shock sag at 102mm and turned the compression 20 clicks out and rebound 13 clicks out. On the forks, we took fork oil out in 5mm increments, depending on the weight of the test rider, and set the clickers at 17 out on compression and 15 out on rebound. 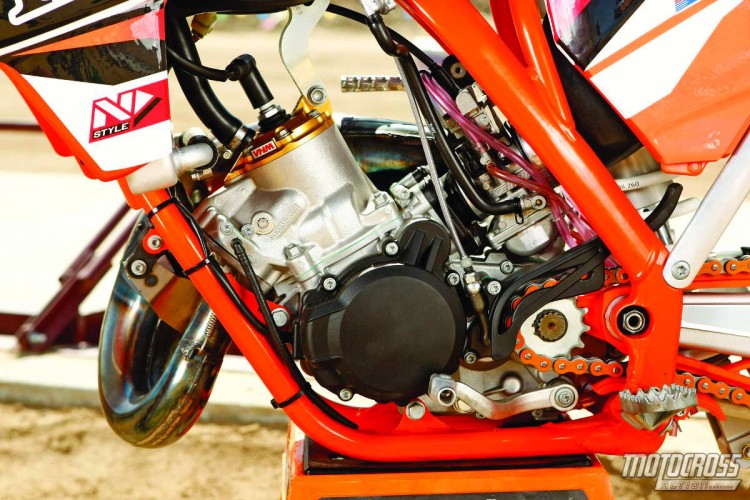 MXA’s goal with our KTM 150SX project bike was to build a fun bike without breaking the bank. As far as the engine goes, all we changed was the exhaust pipe, cylinder head and silencer.

(4) Seat cover. The seat cover came from Moto Seat. It had a lot more traction than the stock seat cover, which is important on a bike that you are crawling all over to keep it hooked up.

(5) Handlebars. We ran ProTaper Fuzion handlebars. These bars are “dual function” in that you can tune in the amount of flex via a dial on the crossbar. We ran them in the locked position. 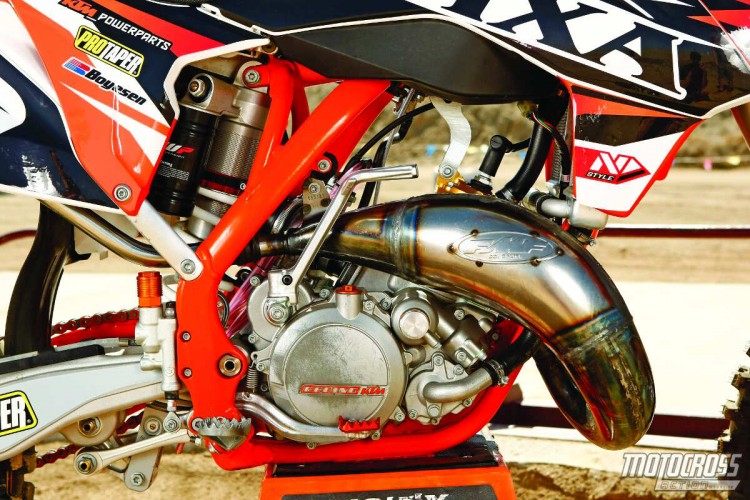 The KTM 150SX engine has the prototypical high-rpm powerband. The big piston adds bark, but knocks off some of the free rev compared to a 125SX.

(7) Wheels/tires. We have had good luck with KTM’s stock wheels, with the caveat of watching the spokes and checking the sprocket bolts regularly. All we did to our 150SX wheels was clean up the rims and install brand-new Dunlop MX32 tires.

(8) Gearing. The cheapest and best fix we made was to add two teeth to the rear sprocket. This tightened up the gearbox and made it a lot easier to go from gear to gear. On bigger and faster tracks, we would opt for only one more tooth. We never ran the stock gearing unless the track was at the Bonneville Salt Flats.

(9) KTM PowerParts. KTM has an accessory division that makes lots of functional parts, cool stuff and anodized gizmos. We went for a smattering of all three. We ran the KTM PowerParts chain guide and slider kit, along with their carbon fiber rear rotor guard. PowerParts also supplied the lock-on ODI grips that come on the Factory Edition models. We extended the rear brake-master cylinder to allow us to last a couple laps longer before burning up the rear brake. Also, on the rear brake, we extended the stock rear brake pedal with 7602 Racing’s brake-pedal tip.

Final words. One of the best things about racing a two-stroke is that it is cheap to fix—and you can do it yourself at home with a nutcracker and a butter knife (although pliers and a screwdriver do work better). We didn’t want to spend beaucoup bucks on our KTM 150SX. Instead, we want to ride it hard and keep the money for pistons and clutch plates. In the end, we spent a grand to get a bike that we could not only race but live with. You don’t have to spend that much on yours; fix what bugs you and go for it.