When two-strokes were king, KTM was not the king of two-strokes. Their bike designs often lagged behind the Japanese brands right up until two-strokes fell out of popularity. However, KTM was early to the party when it came to making a 250 offroad machine. Enduro rider John Penton approached then-bicycle manufacturer KTM in the late 1960’s about designing a offroad motorcycle for the International Six Day Trials. KTM decided to jump on the venture, slapping together a 100cc and later a 125cc motorcycle. The bikes would continue to be used in Enduro type races and made their way into the motocross scene. By 1973, they had five different displacement bikes–a 100, 125, 175, 250, and 400. The 250cc bike, known as the Hare Scrambler, would debut in the 1973 Grand Prix Series.  Russian Gennady Moiseev placed fifth overall in the World Championships. He won the overall in Yugoslavia. The following year he won the 250cc Championship, edging out Jaroslav Falta by a mere six points. Moiseev’s teammate, Pavel Rulevin, placed eighth in the 1973 Championship. In 1977, the brand had swept the 250 podium with Gennady Moiseev and fellow Russian Vladimir Kavinov taking first and second.  Belgian André Malherbe finished third. While the brand spread like a wildfire overseas, it took a while to make its mark in the USA. The first Pro race to feature the 250 machine on American soil was in 1976, where Pat Richter piloted one to 15th place at the Anaheim Supercross. In 1977, it made its introduction into the AMA Nationals. John Hately, Mark Gambetta, Steve Rhyan and Roger Jones all raced the machine at Hangtown that year. Still, without any top 10 finishes, the 250 did little to impress. MXA first published a thorough review of the KTM 250 almost a decade after the bike was introduced. The 250MC was featured in the April 1981 magazine and featured a magnesium engine. It did not reflect the common aluminum blocks seen on the other bikes, and sat in a frame that was also unique for its time. The 250MC had a six-tube bird cage style frame that emulates the appearance of more modern frames found today. White plastics, and forks that had no stiffness to them, were among some of the other features this bike flaunted. No test was complete without a point of reference, and in this one the Maico 250 Mega 2 was the bike used to compare the KTM. While the Maico won, the KTM was faster, but its powerband wasn’t as smooth or broad as the Maico. The suspension really needed work (a problem that KTM couldn’t solve for over 30 years).

While the KTM 250 two-stroke would make its first US podium in 1979, it would never take a US rider to a Championship in Supercross, the Nationals or the World Grand Prix. Mike Healy was able to win four motos and finish second overall in the 1991 World Grand Prix, but he lost the title to Honda’s Trampas Parker by only four points. The one other non-US rider to win on the 250 was Austrian, Heinz Kinigadner. As recently as 2013, 20-year-old Kale Makeham raced the bike to a podium position in the Australian Nationals 250 class. By 1986, the bike had undergone some noticeable changes. The forks had dramatically improved over the original model, but they were still bad in comparison to what the big four Japanese manufacturers were using. Not only were the forks improved on the KTM, but the bike had switched to a monoshock rear shock. The powerband was smooth from low to mid, but had no top-end power. The clutch was unpredictable, the shifter was oddly angled, and the brakes left much to be desired. By 1991, the clutch and brakes were improved significantly, but the suspension still needed work. The bike was good enough that it was starting to be included in the MXA 250 shootouts with the big four manufacturers. While it lost the 1991 shootout, it had shown great strides in development, and in 1992 the suspension was improved. Up until 1997, KTM’s had been white. In 1997 they switched to orange plastics. While the orange was the color of a burnt orange, it made the bike more distinct among its peers. In 2012, the bike finally got a linkage for the rear suspension, long after two-strokes weren’t the mainstream bike to race professionally. 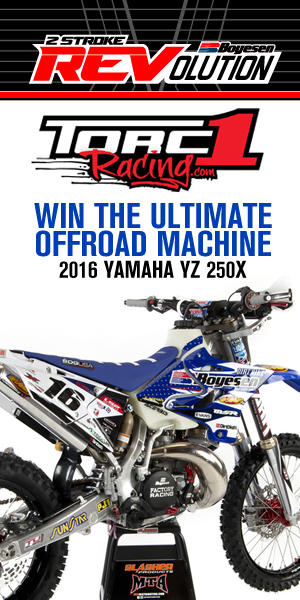