The 2020 Loretta Lynn Pro National #2 is just around the corner and to get ready for another hot and humid day at the Loretta Lynn Dude Ranch in Hurricane Mills, Tennessee, many of the top Pros racing this weekend showed up to Fox Raceway in Southern California for what turned out to be a good simulation for what is to be expected at round two of the 2020 AMA Nationals. With the temperatures above 100-degrees and the humidity above 50% (which is unusual for the West Coast) the weather has been tough, but good practice for the Pros who are getting ready to head East again. The track conditions were also challenging today as it was (in Fox Raceway’s lingo) “Fast Tuesday” or “Pro day” as we like to call it. The dirt was ripped deeper and watered more than any other day of the week. To come out and train in the challenging conditions were factory Pro riders like Marvin Musquin, Chase Sexton, Justin Barcia, Broc Tickle, Dylan Ferrandis, Shane McElrath and more. MXA’s Trevor Nelson was on the scene enduring the intense heat to capture these photos of the Pro riders as they prep for round two of the Nationals. Enjoy! It’s not too often that we see Marvin Musquin training in California. Today he had the entire Red Bull KTM team testing with him while his teammate Cooper Webb is on the couch after he injured himself at the 2020 Loretta Lynn Pro National #1. Click here to learn more about Cooper Webb’s injury. Chase Sexton was very impressive at the first Loretta Lynn Pro National. After crashing in the first moto and finishing 13th, Chase bounced back to finish 3rd in Moto 2 during his first race on a 450. Star Racing Yamaha team manager and test rider, Wil Hahn was riding a Yamaha YZ450F today at Fox Raceway. We’ve heard rumors that Star Racing might be expanding their team into the 450 class next year, but we haven’t gotten confirmation yet. We know that the Star Racing team already has 450s in their shop as the 250 riders sometimes ride them for training purposes. But, it was still interesting to see Wil Hahn riding a 450 in the middle of the Outdoor season while the rest of the guys have their focus on 250Fs. Justin Cooper stops by the fence to speak to his mechanic briefly in-between sessions. Dylan Ferrandis was dominant in the 250 class at the first Loretta Lynn Pro National. He went 1-1 and now will have the red plate heading into round two at The Ranch. Christian Craig putting more time on his new HRC Honda CRF450. Christian has been riding a Geico Honda 450 for the last few months in preparation for the Outdoors, but he got the call from the HRC Honda team to fill-in for Ken Roczen at the last minute and only got to spend a few days on the new bike. We didn’t suspect the HRC bike to be very different, but Christian said that it’s was a big change for him. 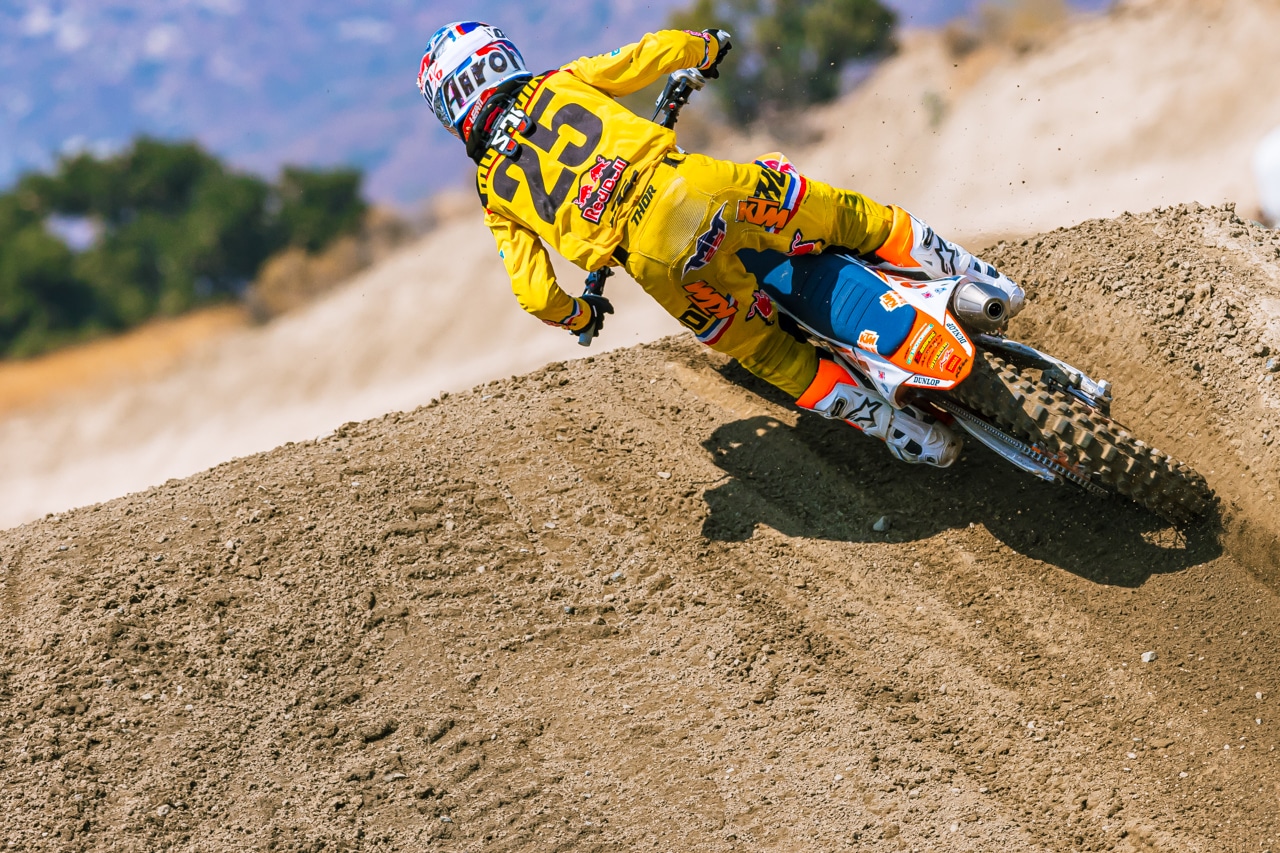 Broc Tickle wearing some new 2021 FXR Racing gear. If you want to check out their new colors and designs for 2021, click here. Mitchell Harrison has his eyes on the prize as he looks to capitalize on the opportunity Mitch Payton gave him to fill-in on the Pro Circuit Kawasaki team. Mitchell was running 5th place on lap thirteen of moto one at Lorettas but he stalled it while trying to hold off Alex Martin and he couldn’t kickstart his bike fast enough to stay on the lead lap. Shane McElrath moving some serious dirt on his Star Racing Yamaha. Shane finished 4th overall at the first Pro National of the season. Ivan Tedesco was out riding today on a Pro Circuit Kawasaki KX250. Ivan has been testing for the team and helping train some of their riders as well. Cameron McAdoo staying low. Cameron is one of the more exciting guys to watch at the track because he uses a lot of body English while riding and he’s always revving the Pro Circuit Kawasaki to its limiter. 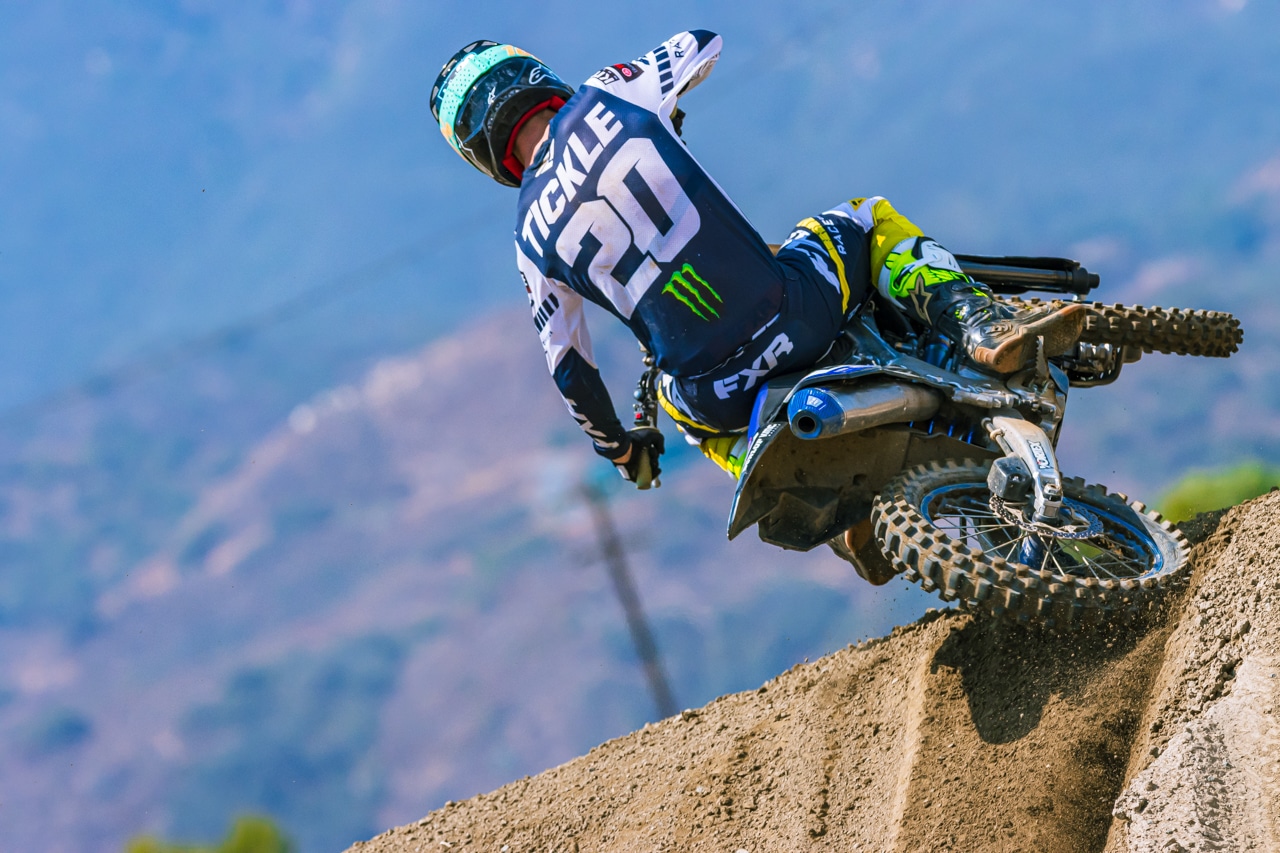 Justin Cooper charging. He finished 8th overall at round one. Carson Mumford raced a few Outdoor Nationals in 2019, but this past weekend he made his jump into the Pro class officially and finished 13th overall. Cameron McAdoo checking on the competition. 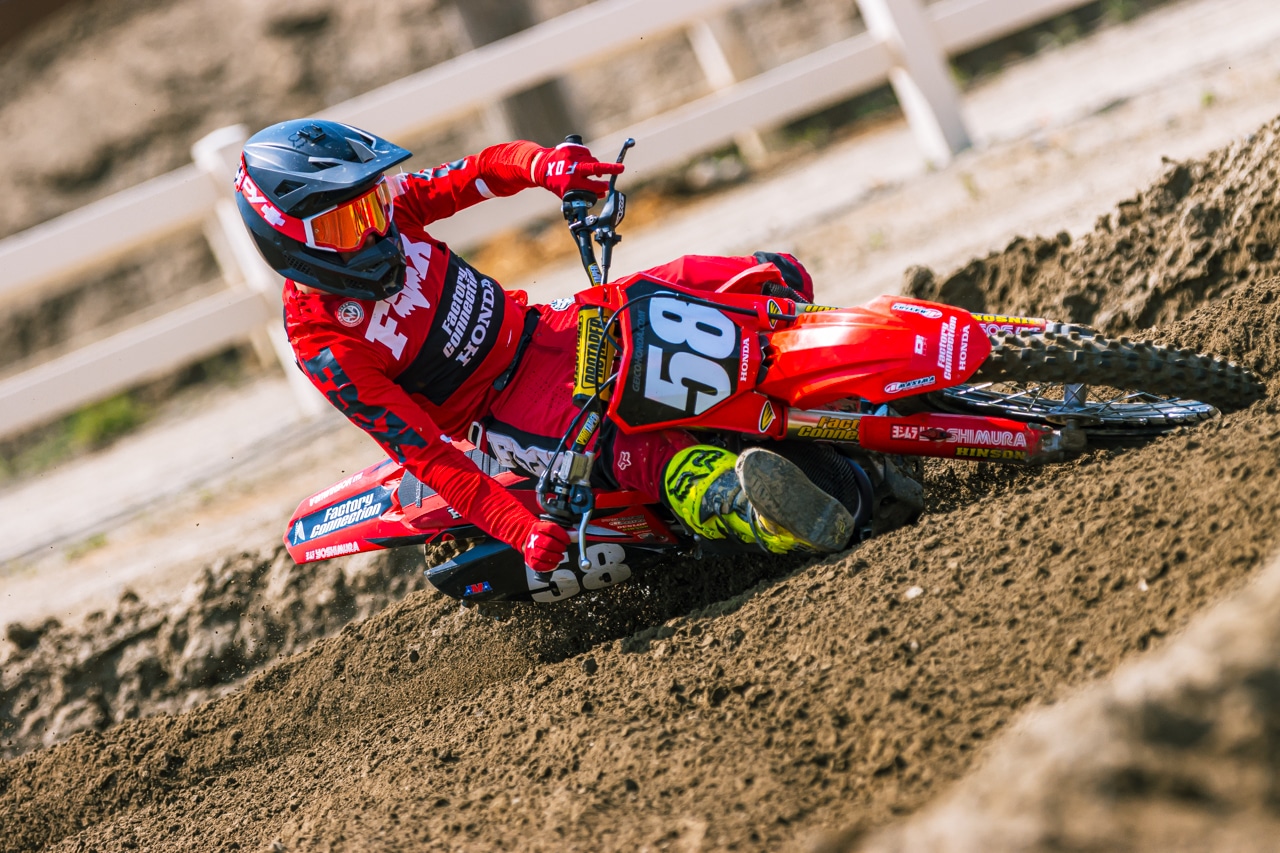 Hunter Yoder on the gas. Chase Sexton recently switched from Shift MX gear, Fox boots and Fox helmet to now Alpinestars from head-to-toe (besides his goggles). The first time we saw Sexton in the new gear was at Loretta’s. Carson Mumford navigating one of the rutted lips today.