One aspect of the Lucas Oil Pro Motocross series we always look forward to is seeing the new rookies in the 250 class as many wait for the outdoors rather than Supercross to turn Pro. One of these riders is the 2021 amateur rider of the year, Nick Romano. Only 17 years old, the New York native has been with the powerful Monster Energy/Star Racing Yamaha team for a while. Now ranked eleventh in points in the 250 title chase, you can expect Romano to only improve. We caught up with Nick to get his take on his impressive debut, and the series to date.

NICK, LET’S BEGIN WITH YOUR BACKGROUND. HOW LONG HAVE YOU BEEN WITH THE STAR PROGRAM? Since about the end of 2019, so definitely has been a few years. They signed me after Loretta’s 2019. I went straight from 85 to the 250f and just took off from there. I had a good amateur career with them, and later a super good A race with Minio’s this past year, and that was it. Bobby (Regan, Team Owner) was like “let’s go racing.” It has been awesome so far with Star.

WAS IT ALWAYS YOUR PLAN TO TURN PRO THIS OUTDOOR SEASON? I would say so. I had a little talk about doing Supercross, but I ended up getting hurt, so we just focused on outdoors. We had this summer’s outdoor series planned for a while. BACK HOME IN NEW YORK, HOW DID YOU TRAIN? Up until I got onto Star, I was just by myself. It was just my dad and I. Once I signed with Star, I moved straight to California with the team, and I was based out there for about a year and a half. I am from New York and was living in Florida and New York at the time. In California, we rode all the public tracks. Now we have made the move to the old Goat farm. It has been fun riding with all the guys at Ricky’s amazing compound. It has been awesome.

IS THE STAR RACING YAMAHA AMATEUR-TO-PRO DEVELOPMENT THE BEST. I think so. Obviously, when I got on the team, I was in B and A class and they prepped me well to be a Pro, and that is always the end goal to become a professional dirt bike rider and win championships for them. But you must take it step-by-step. My trainer Gareth Swanepoel and Bobby Reagan, believe in me, so it is cool riding for the best team out here in the paddock with everyone believing in you. 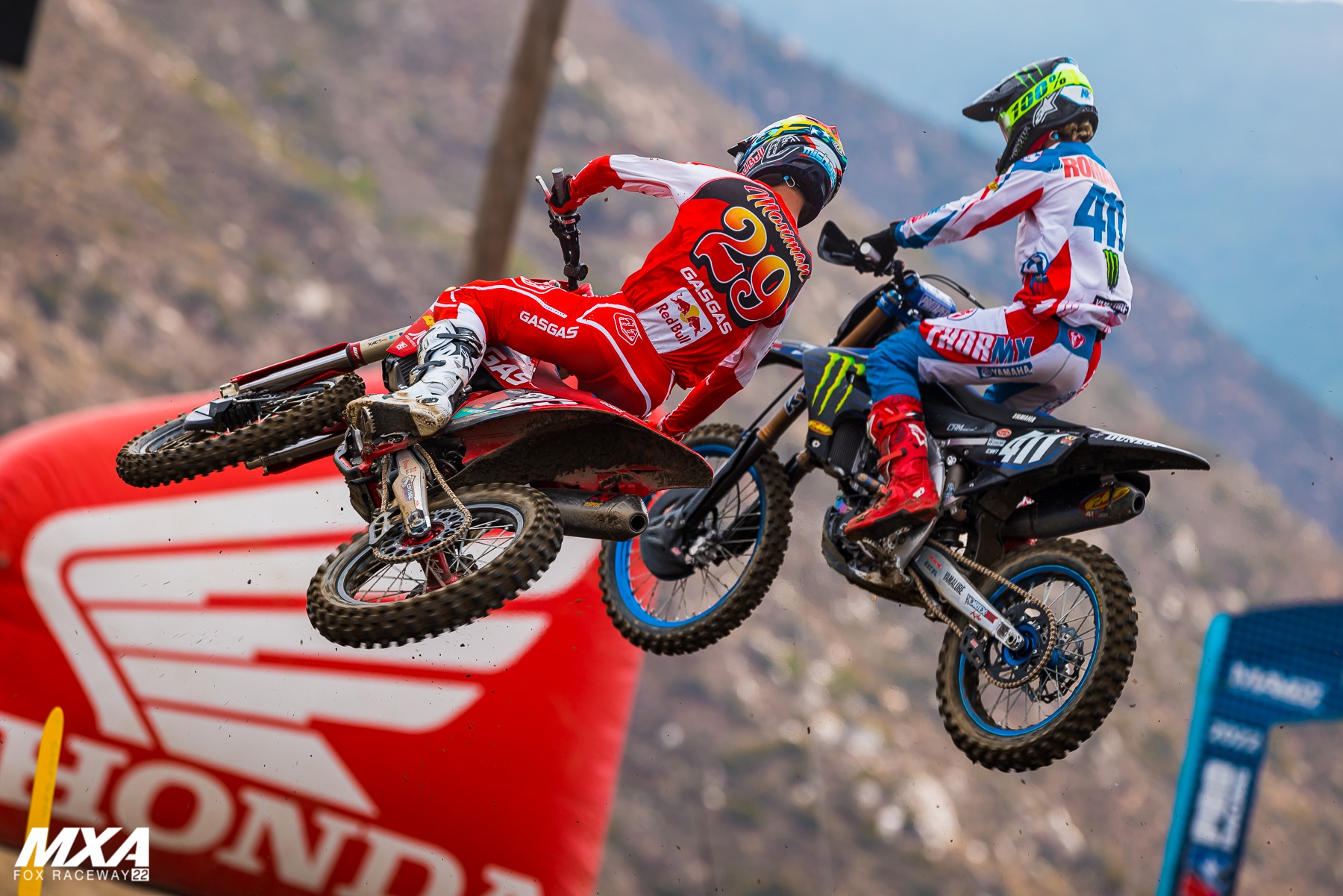 IS THE ATMOSPHERE OF BEING TOGETHER ON THE TEAM REALLY GOOD? Yes, with training together, not too many other teams do that. I would say some are trying to copy us. Just riding together every single day and working out together, it is big thinking about it.

AT PALA YOU WERE UP FRONT EARLY IN THE SECOND MOTO, WHAT WAS THAT LIKE? It was crazy for sure. One of my stronger suits are starts, but I mean coming out of the first turn in first, I did not think I would be in first on my first Pro race. It was sick. Leading 2-1/2 laps and being in the top five for a little bit there, but unfortunately, I got tired. Those are the things that I must learn, right? That pace is gnarly up front with all those champions. It was something I will never forget for sure. Nick snuck ahead of the pack off the start at the first round of the 2022 season.

YOU WERE LEADING JETT LAWRENCE. Leading Jett and the whole pack, it was cool.  I just wanted to get out there and see what I could do. That pace is so much different than amateur racing. You have 20 guys that are your speed. Where I am racing from, there is just maybe one or two guys that are fast. It was so different. I learned a lot, and I watched that race back probably 15 times, just trying to figure some stuff out. I tried some stuff out on my bike this past weekend. I know what I need to do to stay up there longer and see what I can do up front. Both Nick and Nate Thrasher were running sand tires.

WERE YOU UNCOMFORTABLE UP FRONT, KNOWING THEY WOULD ALL BE COMING? It is hard to put into words. Taking the holeshot in my second-ever pro gate drop was pretty wild. It was a crazy experience. That first lap, I was not even thinking, I was just sending it. I came across the finish line first and lead another 1-½ laps before making a little mistake and Jett got me. Then, I just tried to tuck in behind those guys and see how they rode the track. In pro racing you must go fast, but think about the track at the same time. In amateur racing, the motos are so short that you must hammer it and hit whatever line you want. There are so many things I learned just from leading it. Racing those guys, it was surreal. Nick has also managed to find some battles with 250 veterans like Jo Shimoda.

NOW YOU NEED TO REPEAT IT. I know I can do it. It’s so early in my career, I am 17 years old,. I know what I need to do to be up there more and see what we can do the rest of the season.

WAS IT BENEFICIAL TO WATCH THE RACE REPLAY AND FIND AREAS WHERE YOU CAN IMPROVE? I know that I have that raw speed, it is just putting it in for 35 minutes. That will come. I just need some more holeshots and time riding up front with those guys. I SAW YOU AND YOUR STAR TEAMMATES AT THE AIRPORT, YOU LOOKED LIKE YOU ALL GET ALONG WELL. We are all super close. Justin Cooper and I are both from New York. We grew up together. When Levi Kitchen got on the team, he moved in with me and we became super close. The same with Nate when he got on the team, he moved in with me. Our relationship is definitely pretty good for a motocross team. We want the same thing every Saturday but with the team being on the younger side, it makes it a lot easier. There isn’t that big of an age gap. THINK ABOUT ALL THE EXPERIENCE THE 450 STAR TEAMMATES HAVE. Tomac is a legend. Dylan won three championships and Christian just won that Supercross title, so there are champions all around me which is cool to think about. You have some badass guys on Star Racing.

DO YOU HAVE ANY EXPECTATIONS IN MIND ABOUT  WHERE YOU’LL FINISH? I had no expectations for Pala because it was my first-ever National. I think I can be a top ten guy easily even with how stacked the field is right now. The team has not put any pressure on me.  All the pressure is coming from myself, really. Nick grabbing a handful of throttle at Fox Raceway.

YOU ARE FOCUSED ON OUTDOORS RIGHT NOW, BUT HOW DO YOU FEEL LIKE ABOUT THE MOVE TO SUPERCROSS NEXT YEAR? I think I am going to do well in Supercross. I was on Supercross a little bit in December, and you take a sprint lap, or a segment time and I was right there with Craig and all those guys. It is just about getting that experience and putting in the laps that I don’t have yet. I love Supercros. Being that it is only a 15-minute main event, it so much shorter, under the lights with fans packing the stadium. I think I will do super well in Supercross.

YOU HAD A PRETTY IMPRESSIVE PRO DEBUT AND I WOULD IMAGINE YOU ARE ONLY GOING TO GET BETTER. ARE THINGS LOOKING GOOD? Things are looking great really, and I am doing what I love, riding my dirt bike out here with pro racing. I am just looking for progression every weekend. We will go out tomorrow and ride again. I am super stoked for Red Bud, and the rest of the series. Will we see the rookie up front in the pack more often as the season progresses?

2021 RED BUD NATIONAL RECAP: FERRANDIS DOES IT AGAIN, WHILE…

JASON ANDERSON INTERVIEW: “I THINK THE KAWASAKI IS SET…