EVERYTHING YOU NEED TO KNOW: WORLD VET MOTOCROSS CHAMPIONSHIP Tom White is the founder, sponsor and announcer for the World Vet Championship. He also won the Over-40 World Championship in 1990.

The World Vet Motocross Championship celebrates its 32th year at Glen Helen Raceway on November 5-6, 2016. Dubya Wheels is the title sponsor, but there is a bigger story behind Dubya and the World Vet Motocross  Championship. Tom White, who owned White Brothers back in the day, sponsored the first World Vet in 1984, and actually founded the event and sponsored it for the first 26 years. After selling the White Brothers, the new owners gave up the sponsorship, but Tom wanted to keep the race moving forward, so he had his daughter and son-in-law’s company, Dubya Wheels, become the title sponsor in 2014. And they are back for 2016 bigger than ever. Here is the schedule of events for the most important Vet race in the world—start making plans now.

Thursday, November 3: Thursday will feature an open practice from 8:00 a.m. to 2:00 p.m. The 2015 Dubya World Vet Motocross Championship wants to give out-of-state and out-of-country riders as many chances as possible to adapt to the track — while riding with AMA National Pros and 16-year-old kids. It’s a wild day. Smart World Vet racers skip riding on Thursday and stand back and watch the mayhem.

Friday, November 4: Friday offers a special practice, limited to riders who have pre-entered the 2016 Dubya World Vet Championship. This practice runs from 8:00 a.m. to 12:00 p.m. On this day the vendors will be setting up shop and the Glen Helen/Troy Lee Museum will be open in the afternoon. Sunday, November 6: Sunday is the official World Veteran Motocross Championships day. All the same classes that ran on Saturday will race again on Sunday—only this time it is for all the marbles. The exception is the Over-40 Pro class (who named their Champion on Saturday). The big classes on Sunday are the Over-30 Pros, Over-50 Pros and the Over-30 Pro Women. Although former Women’s Wolrd Champion Steffi Lauer is the odds on favorite in the Women’s race, the Over-30 and Over-50 Championships are an unknown quantities. The level of talent is much higher in 2016 than in any year previous.

Sunday at noon: The Edison Dye Motocross Lifetime Achievement Award will be presented for the 19th time. Initiated to honor individuals who have made a positive contribution to our sport, the award has been received by Edison Dye, Roger DeCoster, Jeff Ward, Joel Robert, Torsten Hallman, Bruce Brown, Feets Minert and John DeSoto (among others). This year the 2016 Edison Dye Motocross Lifetime Achievement Award will be presented to Lars Larsson. Lars was the Swedish Grand Prix rider that Edison Dye brought over to demonstrate Husqvarna motorcycles, before anyone in America had ever heard of them, and showcase the sport of motocross, before anyone in America had heard of it. Lars stayed on after his Husqvarna gig ended and formed Thor racing with buddy Torsten Hallman. Lars had a storied motorcycle racing career and is still racing at 75 years old. Lars is a former Over-60 World Champion and a two-time Over-70 Champion.

Over-50 Pro class added: In recognition of the growing number of riders over the age of 50, the 2016 World Vet Championship will be adding an Over-50 pro class to the schedule on Sunday.

Age rules: It doesn’t matter if you will be 40 the next day, you cannot race in the 40 class until you are 40. Cheaters are frowned on—especially in the Pro classes (where true ages are easily verified). The same goes for the Over-25 and on up classes. No exceptions. No cheating. Bring your driver’s license to sign-up when you check in (and you must check in regardless of whether you pre-entered or not). No driver’s license — no race for you.

Class jumping: Riders can ride in their age appropriate class and are then eligible to move down one skill level for every ten years (for example, an Over-50 Expert can race the Over-40 Intermediate class). Old riders can ride in younger classes, but young riders cannot ride in older age groups. This system works like this: An Over-60 Expert can also race the Over-50 Intermediates and the Over-40 Novices—he could also ride the Over-30 Novices and Over-25 Novices.

Why is Saturday a warm-up race? Why is Saturday considered a warm-up race for the Dubya-sponsored World Vet? Because riders come from 20 different countries and almost every state in the union to race, and the extra day allows them to learn the track, the dirt and the massive Talladega start before the big day on Sunday. Many World Vet regulars race Saturday’s race at a reduced pace, then only ride one lap of practice on Sunday morning, so that they are raring to go for their Sunday class. The Saturday warm-up race lessens the advantage that Glen Helen locals have. It is no surprise that foreign and out-of-state riders need time to get used to the roughness, elevation and size of Glen Helen—it is a tough track that gets rougher with each lap and each day. Only the Over-40 Pros are racing for a World Vet crown on Saturday, November 7. 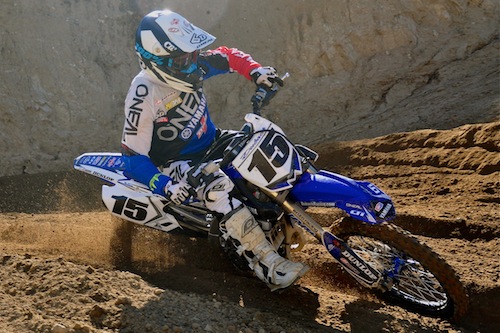 HOW TO SELECT THE CORRECT REAR SHOCK SPRING