REM motocross at Glen Helen this week was very interesting. It had all the drama of a normal motocross weekend — with a few twists. For example 50-year-old Kurt Nicoll, a former 500 Grand Prix racer, came out to ride the Vet Pro class (even though he is 20 years older than the normal 30-year-old Vet). No problem for the two-time World Vet Champion. Kurt swept both motos of the Vet Pro class and, in the process, beat all of the 250 and 450 Pros, regardless of their age, who started on the same gate as the Vet Pros. 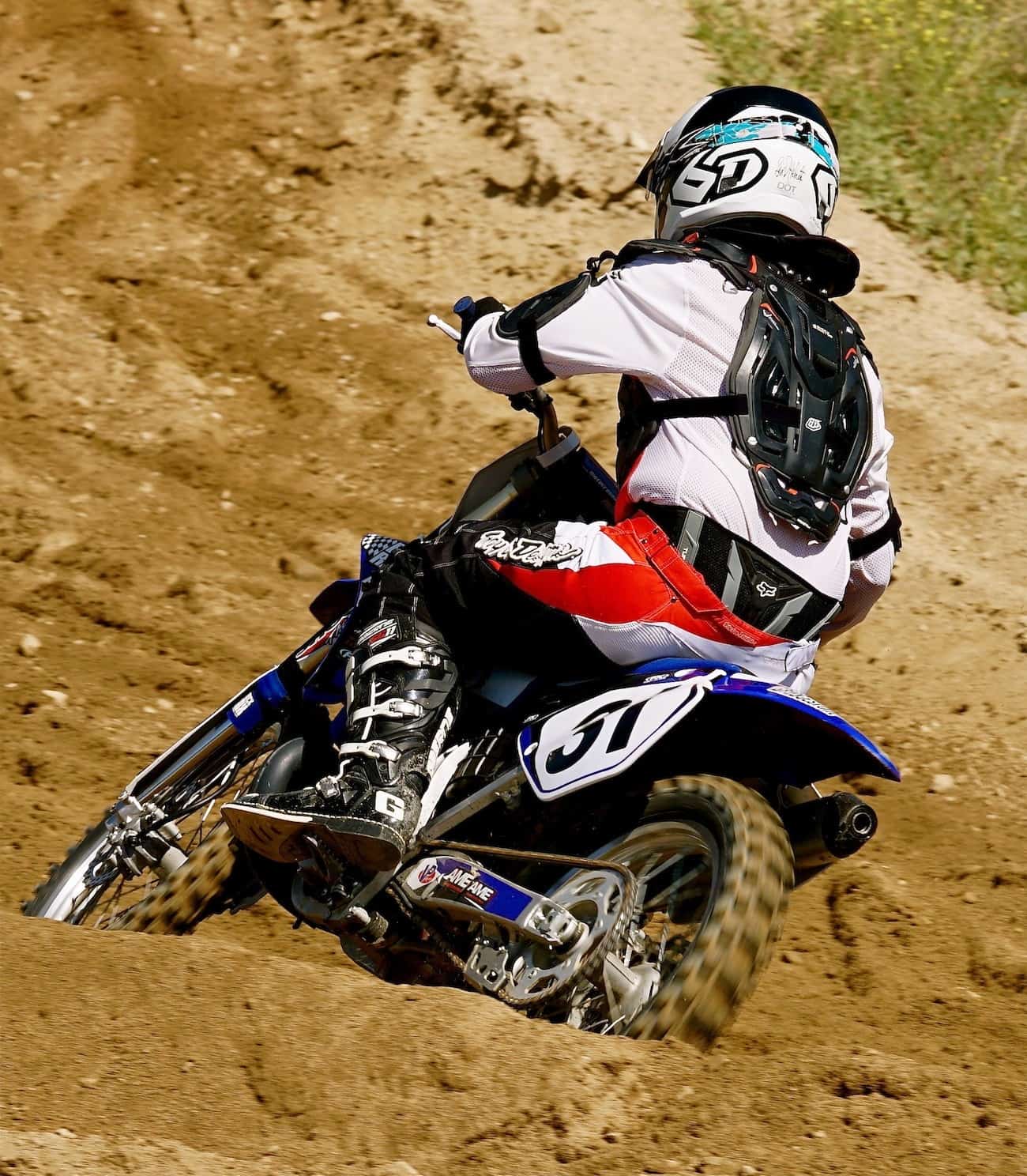 With photographer Debbi Tamietti sidelined with a skiing injury, Jon Ortner was forced to shoot the requisite photo of hubby Val Tamietti. Val won the Over-60 Expert class with a 1-1. Photo: Jon Ortner

REM’s weekly motocross is the last bastion of the Saddleback Specialists — there are very few of them left racing — especially given that Saddleback closed 33 years ago. Which means that anyone who raced full-size bikes at Saddleback when they were 16 years old, would have to be at least 49 years old today. So, if you ever meet a guy who says he raced 125s, 250s or 500s at Saddleback Park, ask him how old he is. If he isn’t close to 50, he’s lying. But REM has a lot of racers who aren’t lying—because it has a lot of motocross racers who are over 50 years old and a few who are over 70 years old. Any time an old Saddleback guy shows up after 33 years, it is like a reunion. This week it was Luc Deley. A former Saddleback Pro, who just happens to be Mitch Payton’s next door neighbor, Luc hasn’t raced a motorcycle in 33 years and has barely ridden one over the last three decades. He came out to watch a friend’s son race his first-ever motocross race — and got talked into racing. Guess what? He loved it. Which then forced MXA photographer Dan Alamangos to shoot a photo of Jon Ortner (10) — who swept both motos of the Over-50 Elite class. Photo: Dan Alamangos

There are always intense rivalries in motocross—probably the least intense (off the track) is the life-long battle between Lars Larsson and Jody Weisel. They have raced against each other for decades — and they do keep score about who has won the most times. Jody says that is is 212 to 15, but never really says who has the big number. It’s understood that Lars Larsson — an AMA Hall of Famer, 1970 Trans-AMA Support Class Champion, multi-time ISDT gold medallist, founder of Thor Racing, the first European GP rider to come to America to race full-time and a three-time World Vet Champion, has won the majority of races. But, in their golden years they are much closer than the were back in the 1970s. They are still close friends after all these years — Lars was an MXA test rider back in the early days of the magazine. When Lars recently had issues finding a bike that suited him, Jody gave him his personal race bike and switched to MXA test bikes. And, as life has it, Lars’ pace picked significantly on Jody’s Cone Valve-equipped KTM 450SXF, as Jody switched to stock CRF450s, RM-Z450s, KX450Fs and 450SXFs. This week they dueled (at a combined age of 144 years old) as if they were settling old grievances. It’s a strange world when motocross fans line the fences to watch two guys from the 1960s going at it hammer and tong in slow motion. In the end, Jody went 4-4 and Lars went 5-5 in the Over-60 Intermediate class. To which Lars said, “If there was money on the line I would have cleaned you out at the bottom of the downhill.” In truth, neither of them would ever endanger the other— on purpose. To the winner goes the spoils, and Jody knew that the score now stood at 212 to 16. To meet moto-photo union rules, Jody Weisel was then compelled to shoot a photo of Dan Alamangos (44) as he and Randel Fout (54) did a low-level flyby on their 2017-1/2 KTM Factory Editions. The flagman was unimpressed. Photo: Jody Weisel Every friend with a pit board has done a parody of the famous “Let Brock Bye” message. During the battle between Lars Larsson and Jody Weisel in their second moto, Jon Ortner flashed a “Let Lars Bye” pitboard to Jody. The kicker? It was Jody who shot the original “Let Brock Bye” pit board photo back in 1977. The above photo of Jody and Jon was shot by Dan Alamangos and, thus, the circle of moto-photo comradery was complete. Photo: Dan Alamangos

There were lots of crashes this week at REM. You can see the photos of some of them here. No one was hurt, but during every race you’d see riders picking their bikes up and getting them restarted. Every racer has a different strategy to crashing. Some jump up and get going — trying not too lose too much time. Others, pick the bike up, straighten the bars and tidy up anything amiss before continuing. Occasionally, a rider will fall on the first lap and sit right where he fell to wait for the pack to come around before rejoining the race at the end of the longest line — and occasionally the REM scorers won’t penalize a rider who is willing to jump back in at the back of the pack, even if he is technically a lap down — because they think its better to have the rider connected to the pack he started with than straggling along a half lap behind. And, of course, there are those who just lay there in disbelief — slowing getting up as though they are trying to decide if they are hurt or not. The final group is made up of riders who crashed and went straight back to the pits. The three biggest classes at REM this weekend were the Over-50 Novices, Over-50 Intermediates and Over-50 Elite/Experts. The Over-50 Novices made up 18% of all the racers at REM. The Over-50 Intermediates were 15% of the total turnout. And 12% came from the fastest Over-50 Elite/Experts. In total, riders from the age of 50 to 59 accounted for 45% of all the racers at Glen Helen. If you count the riders over the age of 60, which were 15% of the total turnout, you have 60% of the riders at REM from the age of 50 to 75. Because REM is largely a motorcycle industry supported race, the percentage of older riders would not be duplicated at very many tracks across the USA — REM is able to tap into veteran employees from the manufacturers, aftermarket, distributors, hop-up shops and magazines, who keep racing because it is part of their business. Brian Medeiros (139) took the 250 Pro victory even though he ended up on the ground in the first moto and finished behind Japanese rider Yaki Okura. However…. Photo: Dan Alamangos

KTM continues to dominate the brand breakdown. 38% of the bikes at REM this weekend were KTMs, 23% were Yamahas, 17% were Hondas, 9% were Husqvarnas, 7% Suzukis, 6% Kawasaki and a small fraction were TMs. Kawasaki just can’t seem to gain any traction with SoCal racers and has been surpassed by Husqvarna as the fourth most popular motocross brand. Suzuki is traditionally the smallest brand, but Kawasaki actually has less racers on the green machines than there are on yellow. The popularity of KTM’s and to a lesser extent Husqvarnas at REM is because older riders are more likely to buy the more expensive KTMs When Yaki Okura fell in the second moto, Brian Medeiors was so close that he actually bunny-hopped over the Japanese rider’s fallen bike for the win. Photo: Dan Alamangos

Foreign riders always account for a reasonable percentage of REM racers, but as the months get closer to summer and the weather improves in Europe they don’t need to come to SoCal for the warm weather  anymore (and it was over 80-degrees at Glen Helen this weekend). Still there were riders from Japan, Australia, South Africa, Holland, Sweden, Great Britain and Canada in he field. Cole Tompkins, now recovered from his shoulder injury, swept both motos of the 450 Intermediates in front of Swede Andreas Lundberg and Tyler Nicolls. Photo: Dan Alamangos After a 30-year break from racing, former Saddleback Pro Luc Deley decided to race again. He got tired, but he should be proud that he still fit in his old JT leathers. Photo: Jody Weisel Rachael Combs’ 6-4 was good enough for a 5th in the 250 Intermediates. Photo: Dan Alamangos Lonnie Paschal’s YZ450F ran over Joe Pena’s YZ450F. Pena’s legs were trapped under the two-bike pile-up. Both rider’s were okay and remounted. Pena ended up 15th in the moto, while Paschal got 13th. Photo: Jody Weisel Back by the quarry section the riders complete an almost 360-degree turn. Photo: Jody Weisel How close do you race? David Cincotta (861) and Dutch rider Ralf Schmidt (73) don’t give any ground. Strangely, Ralf went 3-3 for second, while David went 4-4 for fifth (thanks to a couple of ties on points for third and fourth place). Photo: Dan Alamangos The peanut gallery may be focused on the racers on the track, but four-year-old Logan Fout is more interested in the camera. David Cincotta’s daughter Savana (right) and her friend Hailee don’t care about the races — if there are donuts in the pits. Jody fills up his bike with a special, black plastic, hose bender that curves the tip of a VP fuel can hose down towards the fuel tank opening. Your local dealer can get a fuel can hose bender from WPS for around $5.00. 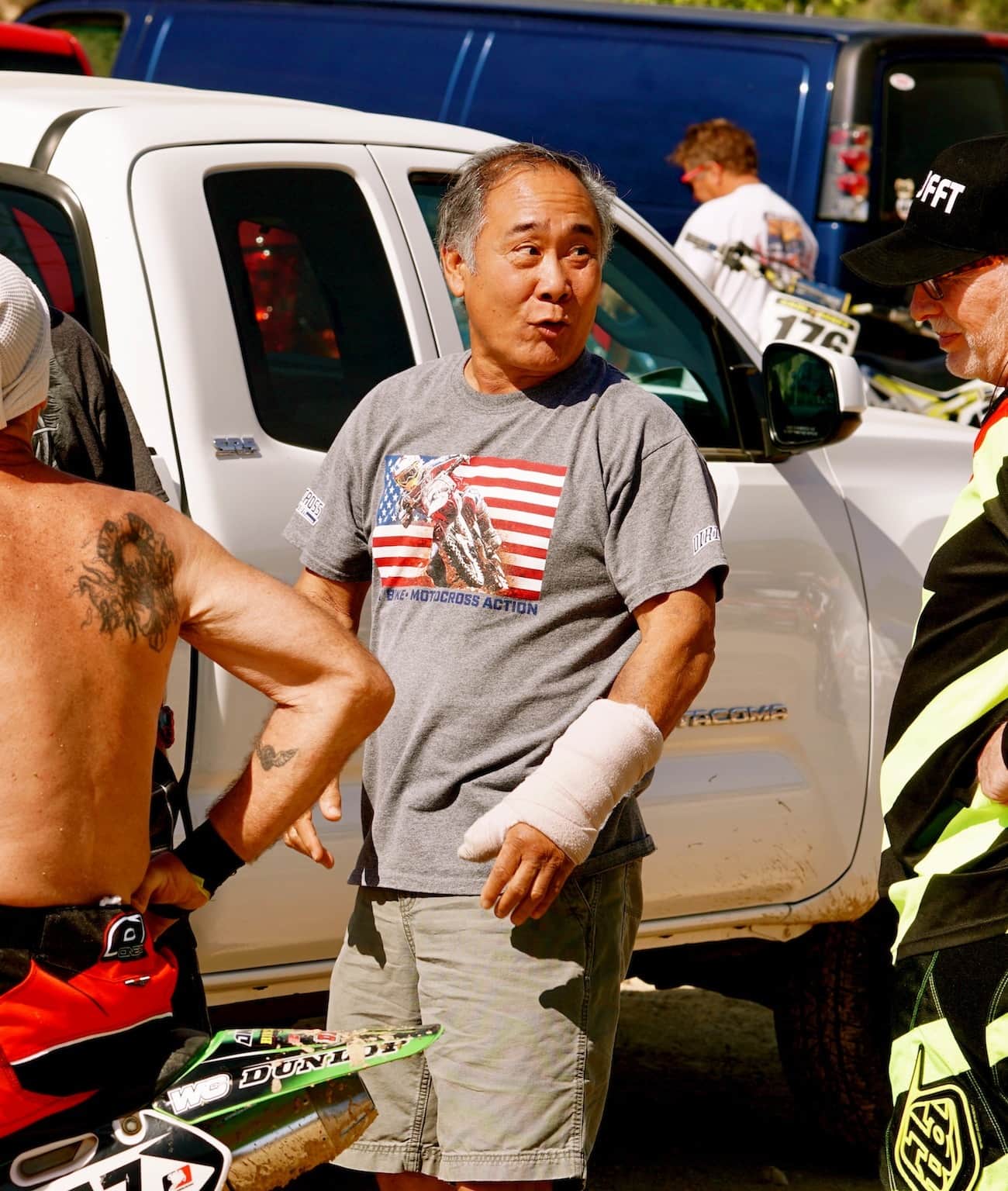 REM racer Brian Martin was injured 10 days ago in practice crash that broke his left wrist and pelvis. Doctor plated his pelvis on Tuesday and he was back at the races on Saturday—albeit watching. Steve Butler was an Australian motocross racer who moved to America and became Jeff Emig’s YZ125 mechanic at Team Yamaha. He would later become the Yamaha team manager before moving to the R&D department to help develop next year’s bikes.

REM does not race next Saturday, March 25, because Glen Helen is being used for a Tough Mudder mud run, but they return on April 1 for a seven-week run (with one of those weeks being the World Two-Stroke Championship in April 15). For more info about REM go to www.remsatmx.com.