ONE PHOTO & ONE STORY: THE IMPORTANCE OF OFFSEASON RACES 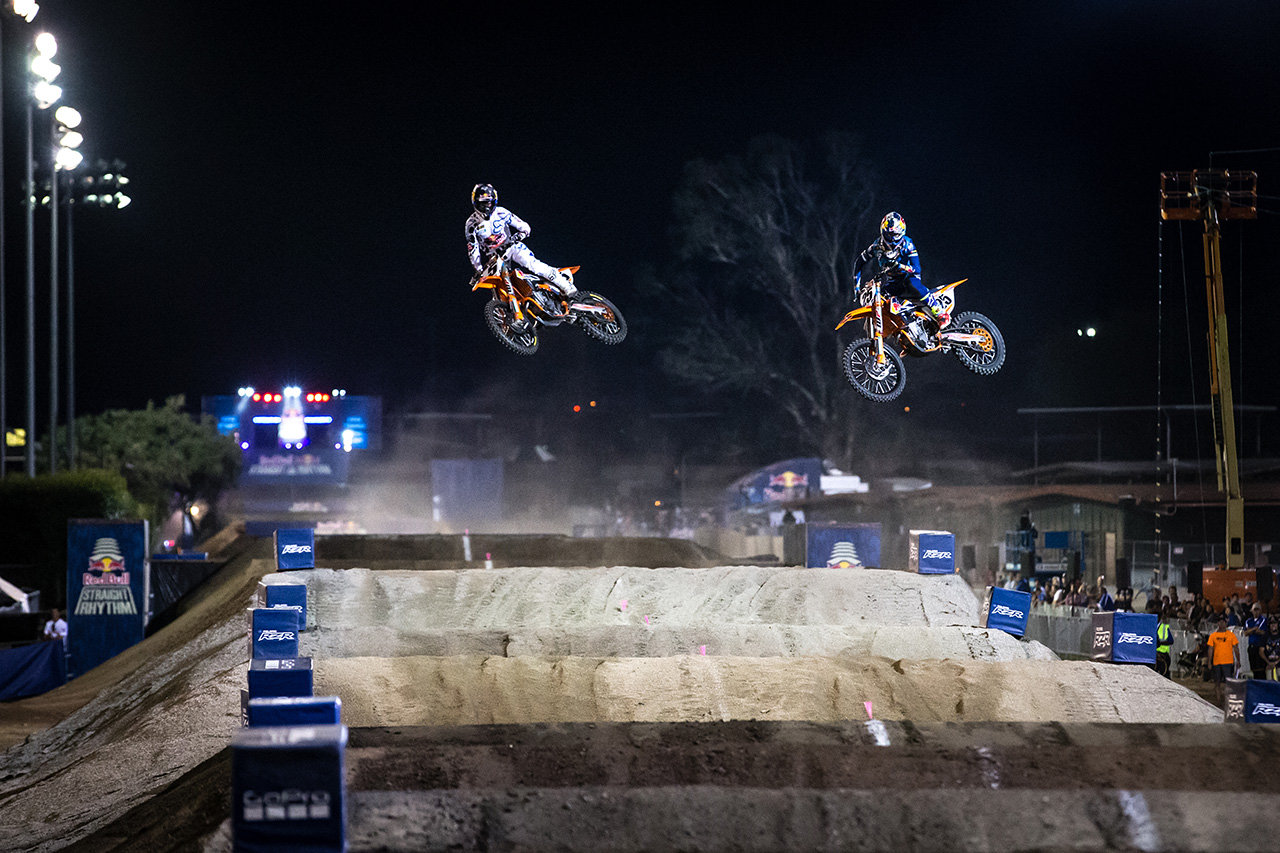 Anaheim 1 is less than two months away. The top secret Supercross factory test tracks, located just south of Corona, California, are buzzing with activity. Boot camp is in full swing. It won’t be long until the season starts anew. The anticipation is building. No one knows who will emerge at the front of the field leaving Angel Stadium in Anaheim on the first Saturday night in January.

There are indicating factors of what winners may come in 2017. Thanks to offseason money races, we’re getting a glimpse into the future. It all began at the Monster Energy Cup last month. Ken Roczen was fastest, while Eli Tomac was most consistent. The hybrid style track lends itself more to Supercross, so there’s some weight in doing well. Expect Roczen, aboard his new Honda, to enter Anaheim 1 with a full head of steam.

The Red Bull Straight Rhythm was held the following weekend. A unique concept and weak field did little to show how the 2017 Supercross series will shake out. Everyone knew that Ryan Dungey, Trey Canard and Marvin Musquin–all Red Bull riders–would have little trouble dismantling a field of privateers. For example, Ryan Dungey had to knock off Dustin Pipes, Austin Politelli and Josh Hansen on his way to the final. Credit goes to Hansen for challenging Dungey; otherwise it was a cake walk for the three-time Supercross Champion. Marvin Musquin bested Dungey in the final by out-scrubbing his teammate. So while Musquin took home the win, it was like clanging the bell in High Striker at the local carnival.

“MARVIN WAS IN A CLASS OF HIS OWN THIS PAST WEEKEND. YES, IT WAS BARCIA’S FIRST RACE ON THE NEW SUZUKI. IT’S ALSO TRUE THAT CHRISTIAN CRAIG AND MALCOLM STEWART WEREN’T ON FACTORY EQUIPMENT. HOWEVER, NO ONE WOULD HAVE BEEN CLOSE ENOUGH TO SNIFF MUSQUIN’S RACE GAS ANYWAY. THE FRENCHMAN WAS IN A LEAGUE OF HIS OWN.”

The Lille Supercross, on the other hand, was a significantly more important indicator of what might happen in 2017. Marvin Musquin destroyed the field–a line-up that included Justin Barcia, Christian Craig, Malcolm Stewart, and Cedric Soubeyras, who is always competitive in European Supercross. Marvin was in a class of his own this past weekend. Yes, it was Barcia’s first race on the new Suzuki. It’s also true that Christian Craig and Malcolm Stewart weren’t on factory equipment. However, no one would have been close enough to sniff Musquin’s race gas anyway. The Frenchman was in a league of his own. In an interview with MXA, Roger DeCoster said, “He [Musquin] has the technique to do better with the toughness, and consistency to do it every week.” Marvin is riding a wave of confidence into the new year.

The Aus-X Open is turning into a high-profile offseason Supercross. This year the promoters managed to nail down Chad Reed, Cooper Webb and Ryan Villopoto. It would be interesting to find out how much they paid Villopoto to come off the couch and race, but I digress. An inspired Chad Reed won both nights. He rode with aggression and had a focus not seen in years. Does Reed’s performance make him a front runner for the 2017 Supercross title? No. It does prove that Reed doesn’t have one foot out the door. He looks fully invested in making another run. That bodes well for Monster Energy Supercross. As for Justin Brayton, he went Down Under to race the Australian Supercross series. It was a smart career move, as the veteran handily won the title. He’ll be racing for MotoConcepts Honda in 2017 and, if rumor is true, the team will receive factory Honda support (using 2016 parts).

There are still a few offseason Supercross rounds remaining. Other than Monster Energy Cup, I predict that the Geneva Supercross on December 2-3 will be the biggest European offseason Supercross race of the year (believe me, I haven’t forgotten about the disasterous SMX Rider’s Cup). The lineup in Geneva will include Justin Barcia (on a fully modified JGRMX Suzuki RM-Z450), Aussie Champ Justin Brayton, Lille Champ Marvin Musquin and Malcolm Stewart, with other announcements coming soon. Who will come out on top? I’m thrilled to take in the action at the Palexpo in Geneva. Look for race reports, photo galleries and, as always, be sure to follow us on social media.