Dean Wilson was back on the bike today after his injury at the Denver Supercross. There is no word yet on when he will return to racing.

We are three races into the twelve round 2019 Pro Motocross series and with a weekend off from racing, the top pros aren’t relaxing, they’re still at the track, training as usual. All of the best guys are looking to use their weekend off to improve on their results from the first three rounds and come out swinging at High Point. Some riders like Dean Wilson and Sean Cantrell are just now getting back on the bike after missing the opening races due to injuries. Joey Savatgy is also working himself back into shape after suffering an injury which caused him to miss the first two rounds of the Outdoor season. Cameron McAdoo was using the practice day to get comfortable on his new Troy Lee Designs Red Bull KTM. Cameron will be filling in for the injured Mitchell Falk at the upcoming rounds. MXA was at Glen Helen as usual and we put together this photo gallery for our loyal viewers in between testing bikes. We were happy to see Cameron McAdoo riding a Troy Lee Designs Red Bull KTM. Cameron will fill in on the team for the injured, Mitchell Falk. After a tough race in Colorado, Joey Savatgy was doing some more testing today with the factory Kawasaki team. Shane McElrath dives down low and hooks the inside rut while Cameron McAdoo navigates his way around the lap traffic. The two TLD riders were battling back and forth with each other a lot today, trying to simulate a race. Australian, Hunter Lawrence put in a lot of laps today. He currently sits 9th in the 250 point standings. Dean Wilson on the brakes coming down the first hill at Glen Helen. While most of the Star Racing Yamaha riders train with Gareth Swanepoel, Dylan Ferrandis chooses to train by himself. Troy Lee Designs’ 250 rookie Derek Drake has been riding well at the Nationals. His best finish so far was a 10th place at Hangtown in Moto 1. 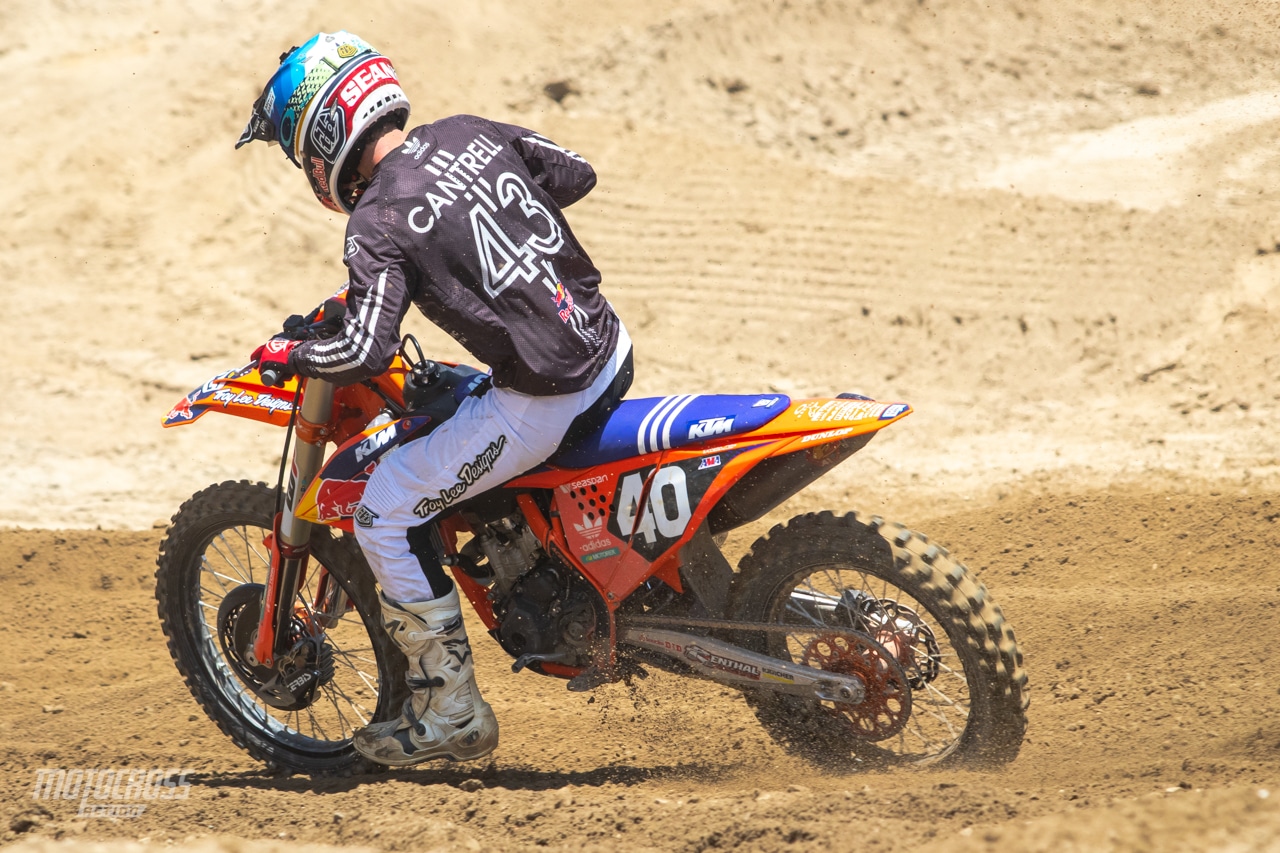 It was good to see Sean Cantrell back on the bike after dealing with a wrist injury during Supercross. Although Broc Tickle can’t race until February 10th of 2020, he was still on the track putting some laps in on his KTM. Garrett Marchbanks is currently 10th overall in the 250 point standings after three rounds. He was looking quick at Glen Helen. JMC Husqvarna rider, Martin Castelo has scored points in 3 out of the 6 motos completed so far at the Nationals. Because he doesn’t have a mechanic to help with his practice bike during the week, Martin has been working over time like most privateers to keep up on his bike work and train. Japan’s Toshiki Tomita currently sits 20th overall in the 450 point standings. Honda of Japan has brought Toshiki over to America for the last three years in a row to compete in the Nationals and prepare for the Japanese Motocross Series. He has improved each year that he’s been here. Ezra Lewis is another amateur rider who was going fast and sharing the track with many top Pros today. Jack Fowler was also looking quick. He finished 30th overall at the Fox Raceway National in his first ever Pro race.

MARVIN MUSQUIN SIGNS WITH KTM THROUGH 2021