REFLECTIONS OF THE PAST: 2010 STEEL CITY NATIONAL The sun broke through the clouds long enough to highlight the second moto start. This photo is deceiving, as Andrew Short (not shown) leads Ryan Dungey (5), Kevin Windham (14) and the rest of the 450 pack. Windham would pass Dungey and Short for the lead a few laps later, but Dungey mounted a charge shortly after to take the lead and second moto victory.

September 4, 2010–the penultimate round of the 2010 AMA 250/450 National series, but more importantly, the site of Kevin Windham’s last professional race win. Steel City in Delmont, Pennsylvania, is no longer on the AMA National calendar. Dropped in 2013 and replaced by Muddy Creek or Utah (if it was Utah, then what was MX Sports thinking?), Steel City was a classic. Set in a valley, Steel City had great spectating areas and a cool layout.

The 2010 round at Steel City was anticlimactic in the 450 class, as rookie Ryan Dungey had clinched the title two rounds before at Unadilla. However, the 250 National Championship fight between Trey Canard and Christophe Pourcel was at a fever pitch. Geico Honda’s Canard fought tooth and nail with Pro Circuit Kawasaki’s Pourcel on that overcast afternoon in 2010, with Trey overtaking Christophe in both motos to cut Pourcel’s lead down to seven entering the Pala National finale. History shows that Christophe Pourcel imploded in SoCal, while Trey Canard rose to the occasion and secured his one and only 250 National title. Kevin Windham missed half of the 2010 National series due to injury and wasn’t really moving the needle upon his return. However, he rode with newfound purpose at Steel City, going 1-2 for the last National victory of his career. Ryan Dungey was on rails in 2010, and by Steel City he had already clinched his first 450 outdoor title. He appeared to be on his way to victory, until a broken front brake rotor foiled his plans. Dungey came back to win the second moto by seven seconds. Dungey went 40-1 for sixth overall. Kevin Windham and Brett Metcalfe energized the masses with an epic battle during the second moto. Both fought valiantly for the overall. Metcalfe ended the day second overall. Kyle Regal had a rough go at Steel City in 2010. That’s Kyle Chisholm behind a flying Regal, while Nick Wey (27) doesn’t notice that Regal is in trouble. The Steel City layout traversed through a valley. It was a tricky track. Tim Ferry saluted the crowd while he shared a moment with his son, Evan. Ferry had retired the year before and was a special guest at Steel City in 2010. Christophe Pourcel (377) and Trey Canard (38) were this far apart all day long at Steel City. Canard ended up winning the battle, as well as the war. Tyla Rattray was on the outside looking in at the 250 National title picture. He wound up second in the final points standings. 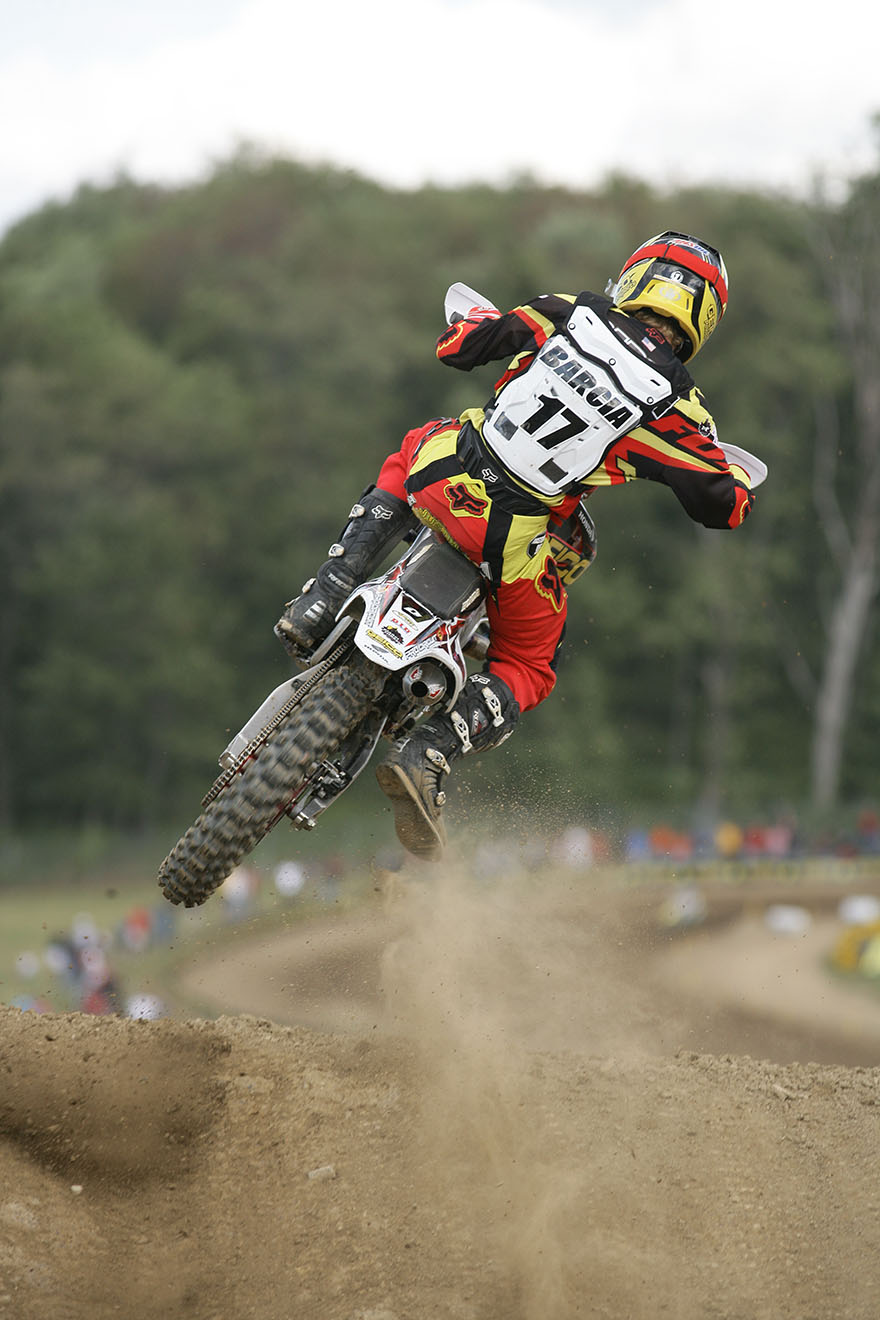 Justin Barcia rode with the same flair and aggression that he does these days. In the 2010 Nationals he was either hot or cold. His up and down results netted him sixth overall at Steel City. Name this rider. Would you have guessed it was Cole Seely? Now a HRC Honda factory rider, Seely struggled with the outdoors for many years. He managed 11-15 for 14th overall at Steel City. Trey Canard was jubilant after sweeping both motos at Steel City. He would earn an even bigger prize a week later at the Pala finale.