And down he goes. All is well except for a couple of Sir Isaac Newton’s laws. Photo: Debbi Tamietti A body in motion stays in motion—especially if that body is still attached to a flipping motorcycle. Photo: Debbi Tamietti This looks very uncomfortable. When MXA weighed the 2019 Husky FC450 later in the day it only weighed 224 pounds, so Josh was lucky—it could have been a lot heavier. Photo: Debbi Tamietti

REM motocross racers suffer the slings and arrows of injuries, big and small, all the time. They take a few weeks or months off, and when the cast comes off they get right back in the saddle. Of course the motocross races go on without them. But when REM promoter Frank Thomason had knee replacement surgery the races couldn’t go on without him. REM is a family run affair with Frank, wife Myra and daughter Janae doing most of the legwork. Frank expected to be out for a week before being able to run the REM races from the seat of his Mule. And since there wasn’t an REM motocross race scheduled for the week of his surgery, it was assumed that REM would be back on schedule the following week. Unfortunately, Frank’s knee didn’t take kindly to having a titanium joint inserted where bone and marrow was the week before. Jon Ortner won the Over-50 Elite class with a 1-1 day, but it wasn’t as easy as that sounds. Photo: Debbi Tamietti

REM was forced to cancel its July 14 race, since Frank couldn’t do anything at the track, and Myra couldn’t trust him to be left home alone. No problem, the REM racers scheduled an “Un-Race” and showed up in droves to hang out with their REM compatriots. So, even though they missed a race, they didn’t miss riding with each other on a perfectly prepped REM track In the second moto Jon Ortner was chasing Luther French down a steep downhill. There was a big kicker at the bottom and Luther hit it hard and went over the bars. Ortner rammed Luther’s KTM and did a stationary nac-nac…and then went on to win the moto. Photo: Debbi Tamietti

The good new! Frank is back. Not the chipper, friendly, smiling, gregarious Frank that we all remember, but instead a grumpy guy with a sore and swollen knee. Luckily, Myra had brought in help to do the heavy lifting and Frank was able to avoid the normal aggravation of running a motocross race. We are glad he’s back and happy to be back racing again. These three 450 Pros were on the gas and spread out across the track. Dalton Shirey (46), Dennis Stapleton (184) and Justin Jones (42) dueled for the win, but… Photo: Debbi Tamietti

With the Washougal National coming up next week and Loretta Lynn on the horizon, lots of REM racers will be heading north or east. Luckily, that doesn’t effect the vast majority of REM’s Over-40, Over-50 and Over-60s racers. They have been through the “Big Race” wringer and want nothing to do with it. They are content to stay home and race at the local motocross track with their friends. So REM is scheduled for next Saturday, July 28, and although the Pros will probably be gone—everyone else will be there. REM is one of the few tracks where the spectators line the fences to watch the Over-50 class race in bigger numbers than for the Pro race. The Over-50 class has always been big at REM, dating back to the days of Gary Jones, Alan Olson and Doug Dubach right on up to the battles between current regulars Luther French, Pete Murray, Jon Ortner, Eddie Davis, Andy Jefferson, Phil Dowell, Shawn Wynne, Kurt Nicoll and all manner of visiting Swedes, Brits, South Africans, Australians, Japanese and Kiwis. Justin Jones looked like he was going to win the 450 Pro class until he pulled into the pits in the first moto with an injured knee. No crash, he just caught his knee in a berm. Photo: Dan Alamangos

The Over-50 Elite class is always combined with the Over-50 Experts. What’s the difference? The Elite riders are former Pros and are just too fast to be scored with the Experts—proven by the fact that when the Elites and Experts are combined the Elite riders are always at the front. But there are Experts who can run with Elite riders for half of the moto before wilting under the pressure (and no Expert rider is stupid enough to go out and beat the Elite riders out of fear that he would be moved up to the Elite class on a permanent basis). Luckily, REM uses lap times to determine when a rider needs to be moved out of the Experts and into the Elites. MXA’s Dennis Stapleton takes the high line around this banked sweeper. Joe “Meltdown” Melton, who has been racing at REM to get ready for the Vet MXDN at Farleigh Castle, is in the perfect position to see Stapo’s line. Photo: Debbi Tamietti

The big battle this week in the Over-50 Elite class came down to the same two riders who have been battling each other for the last couple years—Luther French and Jon Ortner. They are the two fastest half-century riders who are at REM on every weekend. It is true that they can be beat if Kurt Nicoll, Doug Dubach, Ed Foedish, Pete Murray or Andy Jefferson show up, but they aren’t beat by much. And for the week after week wars, they are a joy to watch. Kordel Caro (76)  doesn’t have time to look down to the lower section of the REM track. Kordel finished third in the 450 Pro class on MXA’s 2019 Yamaha YZ450F. Photo: Dan Alamangos

In the first moto of this weekend’s combined Over-50 Elite/Expert class, Jon Ortner grabbed the holeshot and in the scuffle Luther French got knocked down leaving Ortner in first, Dan Alamangos on a YZ250F in second and Pasha Afshar, Ron Shuler, Robert Reisinger, Chris Cole and Bryan Friday in pursuit of Alamangos. Meanwhile, Luther French got up off the deck in dead last. It took him the whole moto, but he powered through the field of Experts to get second behind Jon Ortner. As for the Experts it was Ron Shuler first, Robert Reisinger second, Bryan Friday third and Baja ace Paul Krause fourth. Swede Stefan Adriansson is another rider who only made it through one moto. He joined Justin Jones, Tony Amaradio, Joe Sutter, Phil Desimone, Mike Brownfield, Ray Poltack and Glenn Pietronico in the list of riders who couldn’t answer the bell for moto two. Photo: Dan Alamangos

In the second moto Luther got the holeshot and checked out. Ortner was trapped in a field of Over-50 Experts in fifth or sixth place. By the time Jon Ortner got to second place, Luther French was 10 seconds ahead of him. Surprisingly, Ortner had found some unused lines while working his way through the Experts and he began to reel Luther French in. As they hit lapped traffic Ortner’s new lines worked wonders, while Luther’s lines got him blocked or, at the very least, slowed down. With two laps to go, Ortner made his first attempt to pass Luther French. Coming down the Mt. Whitney downhill, Jon Ortner hugged the edge of the track and pulled up next to Luther French’s KTM. On the last lap, Luther realized that if Ortner used that same line down the downhill again, Ortner would pass him. Tony Amaradio raced his first AMA National in 1993 and his last in 2004, but he has kept on racing and at 45 years old he still has the speed to run with the 450 Pros. Photo: Dan Alamangos

So, Luther did what any self-respecting motocross racer would do—halfway down the steep hill Luther changed from his middle of the track line to Ortner’s edge-hugging line. With 10 feet to go to the hard right-hand turn at the bottom of the hill, Luther hit a big braking bump that he didn’t know was there (because he had never used Ortner’s line before). Ortner knew about the bump and moved slightly to the left to drop into the turn right behind what was now Luther’s flopping fish of a KTM. The bump threw Luther over the bars. However, Ortner hadn’t calculated that Luther’s bike would block the track in a spot where braking was almost impossible. Thus, Ortner’s YZ450F rammed into Luther bike. Ortner hung on to the bars with a death grip. By staying on his bike, Ortner was able to go around Luther’s bike and take the second moto win to go with this first stanza victory. 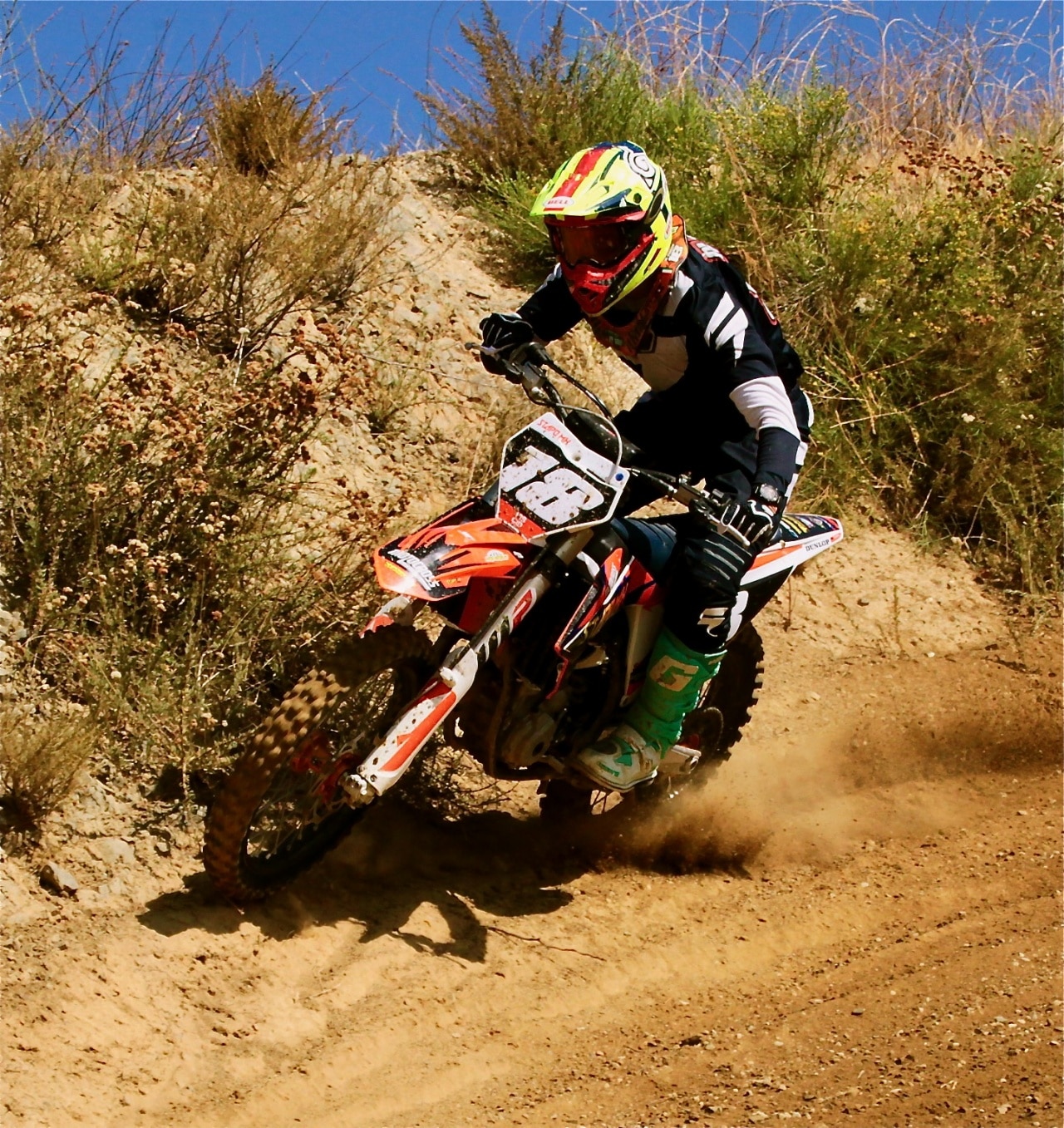 Meanwhile behind them, Robert Resiinger won the second Over-50 Expert moto to go 2-1 and beat out Ron Shuler’s 1-2. Bryan Friday was third with a 3-3. Next week the battle will resume. Any bets on which rider wins in six days? Las Vegas’ Todd Potkay accelerates out of the back section of the REM track to win the Vet Beginner class. Photo: Debbi Tamietti Brian Bolding won the Over-40 Intermediate class with a 1-1. Photo: Dan Alamangos MXA’s Jody Weisel and Josh Fout split motos on the 2019 Husqvarna FC450 and 2019 KTM 450SXF to double the test time—although there was a little straightening taking place between races. Photo:Debbi Tamietti Dave Eropkin (811) looked like he had Val Tamietti’s number after a couple wins, but Val (31) regained his place in the pecking order this weekend with a 1-1 to Dave’s 2-2. Gene Boere (62) gets out of their way. Photo: Jon Ortner Jack Phinn (315) had so much fun at last week’s “Un-Race IV” that he came back for this week’s regular REM race. His 3-2 was good enough for second overall in the Over-50 Novice class. Photo: Debbi Tamietti Aussie Dan Alamangos was assigned to race MXA’s 2019 Yamaha YZ250F. He hung it out and almost holeshot all of the 450s in his class, but got pipped by Jon Ortner’s YZ450F. Photo: Debbi Tamietti Phil Cruz went 1-1 in the Over-60 Intermediates. Photo: Dan Alamangos Joe Pena (911) raced the Over-60 Experts and had a bad day with an 9-7 score, but dropped down 20 years to race the Over-40 Novices, where he went 4-2 for third overall against the kids. Photo: Debbi Tamietti Mike Marion is still recovering from his Mammoth Mountain start crash. He broke his hand, eight ribs and got a major concussion. He says the cast comes off in a week. Photo: Debbi Tamietti Brit Tony Parsons won the Over-65 Intermediate class with a 2-1. Photo: Debbi Tamietti