REM GLEN HELEN MOTOCROSS: IT WAS A CASUAL DAY UNTIL A WAR BROKE OUT MXA was testing a Dicks Racing/MX1 Suspension fuel-injected KTM 300XC-W TPI fuel-injected two-stroke at REM. This is MXA Assistant Editor Josh Mosiman wringing it out. Before the day was over it was raced by three different test riders Photo: Debbi Tamietti

REM has a reputation as one of the safest races in SoCal. There are weeks and even months with no need for the ambulance, but this week was a tough one. First, the 450 Pros came cartwheeling down Mt. Whitney in a crash that kept collecting more and more riders. That was followed one race later by a last lap crash by Val Tamietti that results in a broken tib/fib. Finally, Chris Cole crashed all by himself and broke eight ribs and punctured a lung. Five guys from the Pro class pose with each other before the races starts. McClellan Hile, Richard Taylor, Tallon LaFountaine, Daniel Mills and Justin Muscutt would all play a part in a big crash on the Mt. Whitney downhill later in the day. Photo: Debbi Tamietti

SD Sails: We’ve been designing and fabricating tensile canopies for our trade partners worldwide since 1992.

None of the 450 Pros were seriously hurt, based on the fact that they all walked away, but the injuries to the popular Val Tamietti and Chris Cole were more serious. Both ended up in the hospital and will be out of action for a couple months. Michell Oldenburg won the first 450 Pro moto, but was at the tip of the spear in the big second moto crash. Photo: Jon Ortner The crashes were unfortunate because the track was fun and challenging. And, like all REM races the program was moving along swiftly until the races were stopped three times to pick up the carnage. Making matters worse was that the giant water tank on the top of Mt. Whitney tipped over and tumbled down the backside of the big hill. It didn’t land on the track, but a load of water flooded the back of the course and the final Over-40 and Over-50 Novice race was canceled (and their results were based on their first motos). REM does not race this coming weekend because it is “Day In The Dirt” week or the following weekend because that is the date of the Robby Gordon World Offroad Championships. REM will return on December 8, 15, 22 and 29 for a four-week run of races to finish out the 2018 season. The 1500 gallon water tank that has sat on the top of Mt. Whitney for the last 15 years must have been damaged by the 70 mph winds of last week because sometime late in the day it slipped off its pad and fell down the backside of the hill. Photo: Jon Ortner When the day began the water tank was on top of Mt. Whitney. Photo: REM By the time the day was over the water tank was gone. Photo: REM Mark Crosby is a two-stroke specialist and went 7-5 in the Over-60 Experts. Photo: Debbi Tamietti Dave Eropkin won the Over-60 Expert class. The Over-60 Experts, Over-50 Experts and Over-50 Intermediates were the three biggest classes of the day. Photo: Debbi Tamietti Mic Rodgers (115) won the Over-65 Intermediate class with a 1-1 score. Photo: Debbi Tamietti You gotta love it. Jose Iii Lizama won the Pee-Wee PW50 class on the REM Kid’s track with his training wheels still on the bike. The REM Kid’s track is designed for Beginners and entry-level riders on 50cc, 65cc and miscellaneous four-stroke play bikes. Photo: Jon Ortner Brian Martin is injured, but comes to the races with Rita to hang out with his friends. Rita, on the other hand, isn’t as friendly as she looks. Photo: Debbi Tamietti 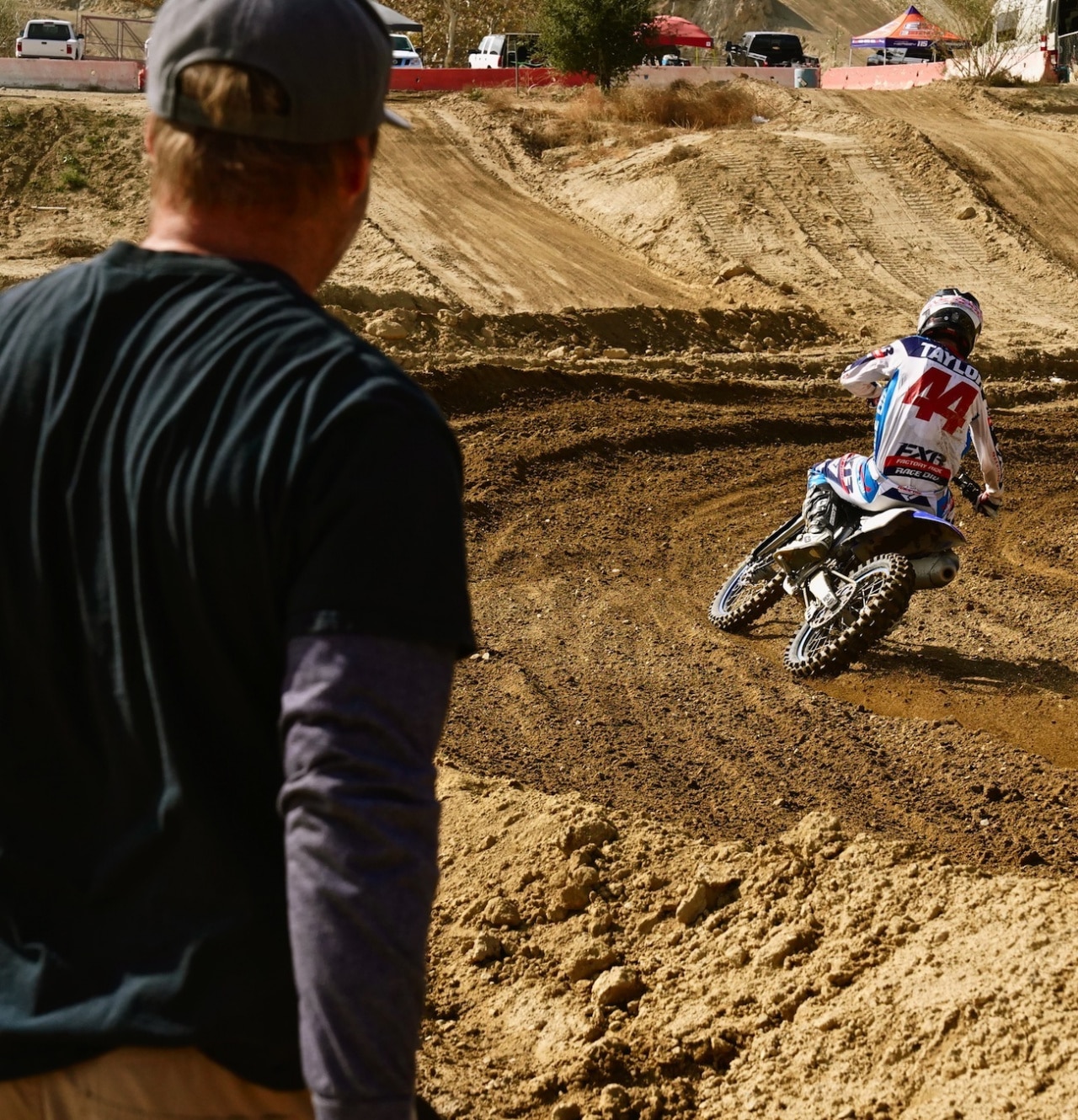 Jody Weisel (63) and Lars Larsson (38) have a combined age of 149 years. They love to race each other and have been doing it for decades. In fact, to keep it fair they switched bikes between motos with each riding the fuel-injected KTM 300XC-W TPI in one moto and the KTM 350SXF in one moto. Lars’ 3-3 beat Jody’s 4-4, but Jody styled out front for a while. Photo: Dan Alamangos Luis Macias spun-out his TM in this banked 180-degree turn and was quickly turned into a corner marker as Matt Bynam (317), Dylan Mroz (62), Justin Muscutt (16) and Daniel Mills circled around him. Photo: Dan Alamangos Val Tamietti crashed on the last lap of the second moto in the Over-60 Expert class. He tangled with two lappers and suffered a broken tib/fib in his left leg. The doctors says that they think they can cast it and let it heal naturally—without metal. Photo: Dan Alamangos Motocross would be a lot more dangerous without the help of other racers. Here, Chris Cole crashes bad enough that fellow competitor Bryan Friday stops to help him, while another racer on the sidelines yells for the ambulance crew. What you don’t see is that photographer Dan Alamangos laid down his camera and jumped out in the track to slow the riders down. Chris broke 8 ribs and punctured a lung, but he’ll be back. Photo: Dan Alamangos

REM doesn’t race again until December 8, 2018. The next week is the Day in the Dirt and the following weekend is the Robby Gordon Offroad Championship. For more info on REM Motocross go to their facebook page or web page at www.remsatmx.com