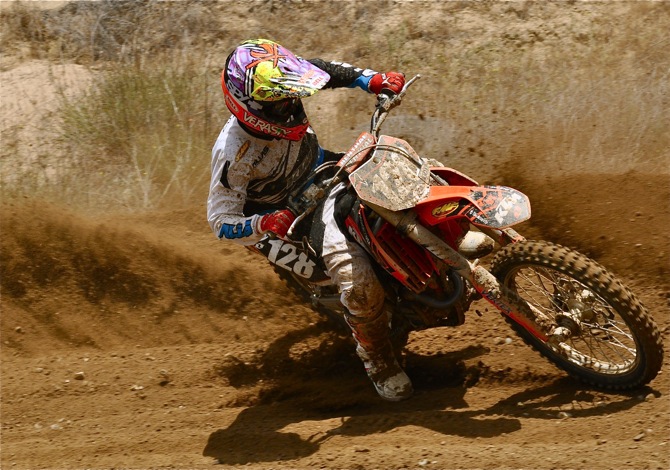 Although SoCal has many racetracks, most of them specialize in practice days?not races. Glen Helen is unique in that they are only open one day a week for practice (Thursdays), but their weekends are packed full of races. And, REM is the most active race organization in SoCal. REM races 40 weekends out of the year on their own purpose-built race track, located high on a hill above the Glen Helen National track, Stadium Cross track and Lucas Oil Offroad Truck track.


Back from his foray at the AMA Nationals, Colton Aeck was untouchable in the 450 Pro class.

REM has been relegated to the Glen Helen National track for the last month so that the Red Bull X-Fighters crew could come in an transform the old Arroyo Cycle Park location into a freestyle park. After Red Bull left the REM track had to be transformed back into a motocross track. And this weekend was the grand opening of the new layout. Next week will probably see a variation on this week’s track and so on throughout the year. A big crowd showed up at REM to ride the reconfigured layout.

Although SoCal has had a mild winter, with very little wind (save for X-Fighters weekend) and near perfect Mediterranean temperatures, this week was the first hot day on the year ?100 degrees. Amazingly, most REM racers prefer hot weather to cold weather and they came prepared with awnings, umbrellas and Canopy Cools.

450 Pro: Colton Aeck was the star of the day. He simply rode away from the rest of the field. South African Gareth Swanepoel gave chase, but it wasn’t Swannies day and he had to settle for 2-2 behind Aeck’s 1-1. Dylan Gosling’s 3-4 edged out the 5-3 of Swede Marcus Ovegaard.

250 Pro: KTM-mounted Hunter Falk also had his way in the 250 Pros, as Devin Roth and Jared Hicks engaged in a war to see who would take the runner-up spot. Roth’s 3-2 defeated Hick’s 2-3.


Those ants down below are the targets that Kyle Fry (271) is shooting for.


Just when you think no one is looking ? snap! You are captured cheating. Justin Hoeft (615) is fast enough not to need to do bush league things that bring his reputation and that of his sponsors into question. Justin is this week’s “Greg Groom Creative Line Award” winner.

WHAT ABOUT THE VETS

Over-30 Beginner: The Vet Beginner class was won by Mike Wilson who split 1-2 and 2-1 scores with Ken Sarmento. Coincidentally, the battle for third fell to Jason Chism over Shawn Khacherian with matching 4-3 and 3-4 motos.


Australian Dan Alamangos laid down his camera long enough to sail down one of REM’s many steep drops.

Over-30 Pro: Normal Over-40 Pro winner William Hendershot decided to take his Yamaha two-stroke down from the older group to race in the Vet Pro class. Hendershot swept both moto wins in front of Tony Amaradio and Justin Reese. With Hendershot absent from the Over-40 Pro ranks, Randel Fout rode to an easy win in his first race back from a concussion six weeks ago.

Over-50 Novice: Syd Wood’s 3-1 was good enough, just barely, to take the win over Ty Larson’s 1-3. Paul Dobereiner’s 4-4 earned a podium spot in front of the 7-2 of Bill Reimer. Both Reimer and Shy Moshe finished second in the motos, but backed them up with a seventh and a 13th.


Four-time 250 National Champion Gary Jones raced two classes in the 100-degree heat. He won the Over-60 Experts and finished 7th in the Over-50 Experts. Jones has qualified for Loretta Lynn’s in the Over-50 class, but has no illusions that a 60-plus rider has much of a chance. He just wants to race because he will be there manning the Hinson booth all week.


What Tilley didn’t understand is the the Over-50 Experts are the most serious and hard-fought class at REM…and they don’t take 450 Pros playing with them lightly.

Over-60 Expert: Gary Jones got stung by a bee on his way to the starting line for the first Over-60 Expert moto, but it obviously didn’t bother him as he swept both motos. Lyle Sweeter’s 2-2 earned him second, with George Kohler (4-3) third, Tom Holmes (3-2) fourth and John Huegel (6-6) fifth. Jody Weisel lost his brakes in the first moto, but managed a 10-5 for sixth overall in front of Tony Parsons, Lee Amaradio, Tom White and Bill Seifert.

HOW MANY RACES CAN YOU HOLD AT ONE PLACE ON ONE WEEKEND?