REM GLEN HELEN MOTOCROSS RACE REPORT: IT WAS 84 DEGREES, SUNNY AND THE RACING WAS HOT AS ALWAYS There is a standard joke among the regulars at Glen Helen that unlike places that have Spring, Summer, Fall and Winter, there are only two seasons at Glen Helen?Hot and Windy. At this week’s post-Thanksgiving motocross race?the weather was both hot and windy at the same time. The heat was a byproduct of the Santa Ana winds that blew off the desert to produce temps in the mid-80s and winds around 20 mph. Luckily, Glen Helen’s REM track is protected from the winds because its layout aligns with the upwind and downwind breezes?save for one tabletop (which bit two riders late in the day). 250 Intermediate: Ryan Surratt used a 2-2 to take the 250 Intermediate victory after first moto winner Mitch Van DeMortel crashed out of moto two. The second moto was won by Max Groom, who had issues in the first moto that stopped him from keeping Surratt and Italian Lorenzo Brogi from the top two steps of the podium. 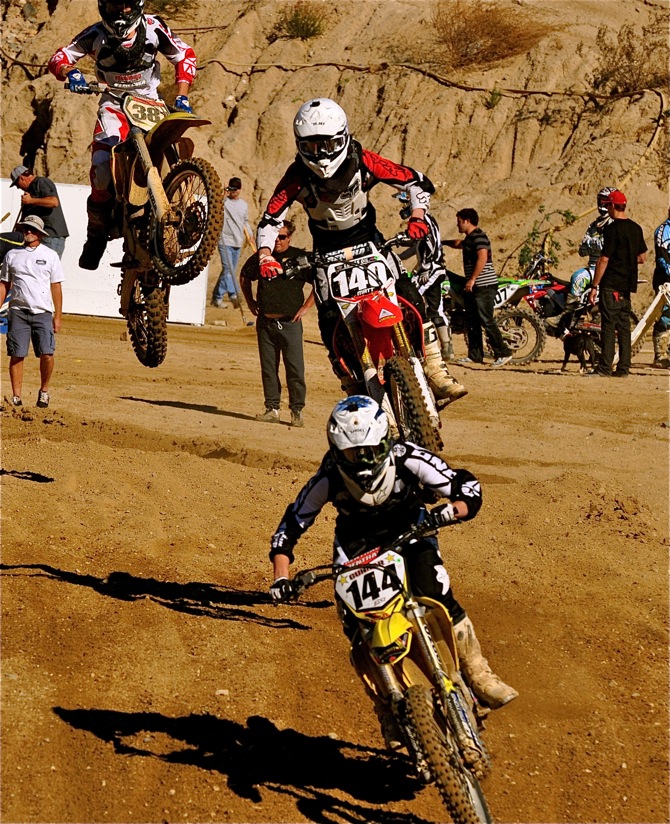 Over-50 Expert: There was a lot of dueling in the Over-50 Expert class, but not up front, as Pete Murray swept both motos and Jon Ortner finished second both times. The top ten was rounded out by last week’s winner Randel Fout (3-4), Dave Eropkin (6-3), Greg Nelson (5-5), Willie Amaradio (4-6), Ron Lawson (8-7), David Blunk (9-9), Fred Nichols (7-11) and Dennis Boulware (10-10). The Over-50 Experts also saw the defection of three former Over-50 Experts down to the Over-50 Intermediate class. This is the normal ebb-and-flow of riders out of fast classes into slower ones…with a twist. The three drop-down riders (Greg Groom, Randy Skinner and Mark Hall) went one-two-three in the Intermediates. Paul Crouch (3) leads the Over-50 Novices through the first turn. Inside of Crouch is Air Show pilot Doug Jardine (265). Ted Kukla (98) will come out of the first turn in good position and take second overall behind Crouch. Photo: Mark Chilson

Over-50 Novice: This was the biggest class of the day and Paul Crouch, Jr. was the class of the class. He motored his KTM away from the massive field to win both motos. Ted Kukla was second, Craig Johnston third, Maurice Diamond fourth and Brian Underdahl fifth. Late in the second moto, Brian Martin jumped the cross-wind tabletop just as a gust of wind hit the side of it. Martin’s bike was blown out from under him. Then, as Martin crashed, ARC’s Bob Barnett blew over into Martin’s downed Yamaha. Both riders eventually got up. Unlucky Brian Martin got enough air over the cross-wind tabletop that his bike was blown out from under him. Then, ARC lever’s Bob Barnett landed on his bike (amazingly both riders had ARC’s all-new unbreakable composite levers on their bikes). The levers survived, but both riders were bruised. Anchorage, Alaska’s Charlie McGee (4) ended up ninth overall. Photo: Dan Alamangos

125 “A” Adult: The closest racing of the day was in the 125 “A” Adult class. This class isn’t for the kids, who have their own 125 Novice and Beginner classes, but for riders from other classes who want to try their hand at reliving their 125 youth again. One-third of the field was made up of Over-50 Experts and one-third was from the Over-40 Intermediate class and the final third from various Vet classes. MXA‘s John Basher, the youngest rider in the field, took the overall win with a 1-2 (in a field that was never more than 100 feet apart for both motos). Dirt Bike‘s Ron Lawson (2-3) ended up second overall, Randel Fout (5-1) third, Scott Williams (3-5) fourth and Dan Alamangos (6-4) fifth. Over-60 Experts: The Over-60 Expert class was only exceeded in size by the Over-50 Novice, Intermediate and Expert classes. Tom Holmes took the overall victory when he ran down Tom White to make a late-in-the-race pass that gave him a 2-1 to beat the White Brother’s 1-2. The top five was?Ray Pisarski (3-3) third, Lars Larsson (5-4) fourth and MXA‘s Jody Weisel (4-5) fifth. Glen Helen blocked off a special parking spot in the pits for John Basher?they called it “Basher’s Space” in honor of his MXA column. Photo: Dan Alamangos

SEE IT NOW! KILLY RUSK PUTTING IN THE TIME BEFORE A1