REM GLEN HELEN MOTOCROSS: SQUEEZING IN BETWEEN THE TRUCKS 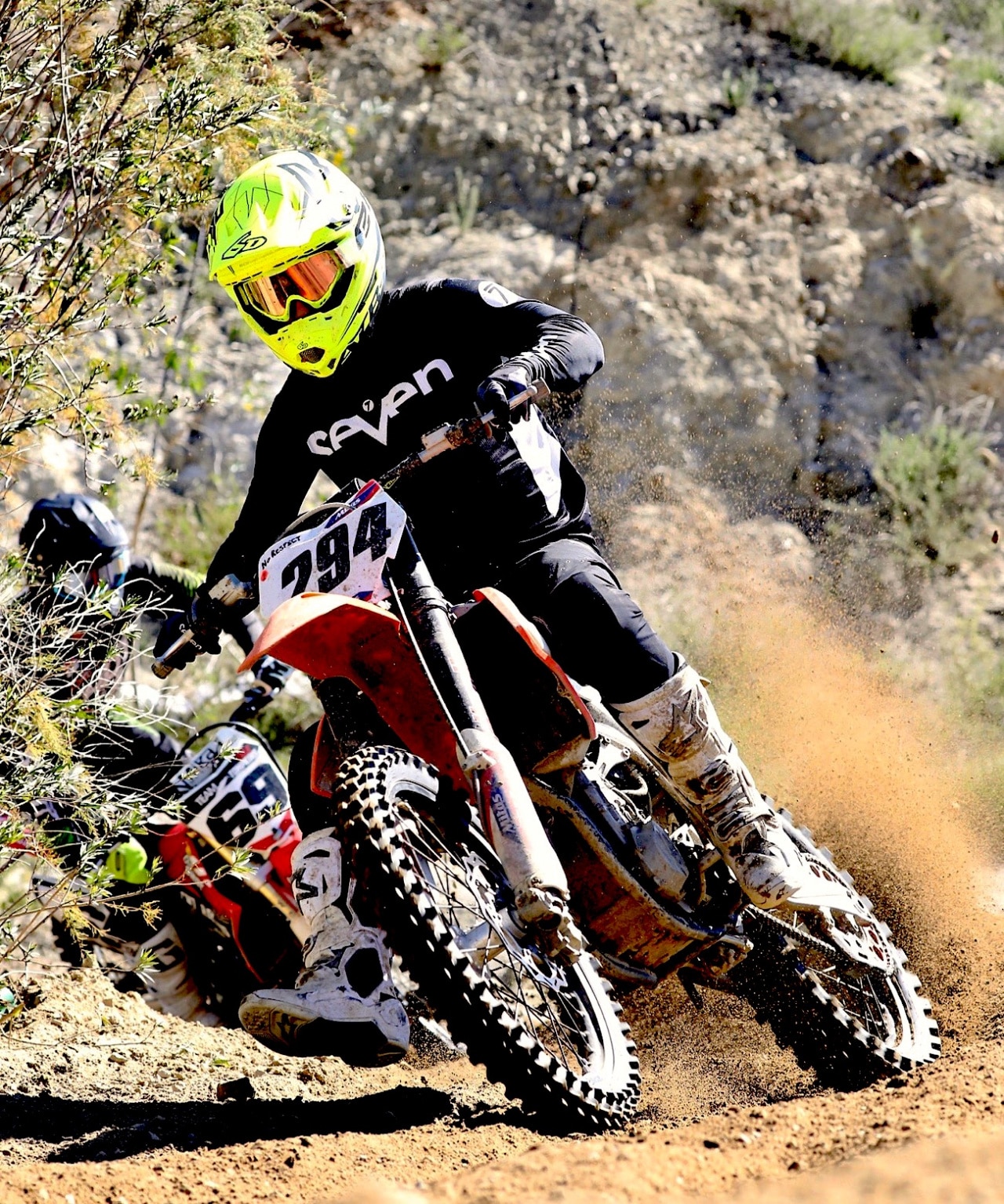 SoCal’s Glen Helen Raceway in San Bernardino, California, was a very busy place on Saturday as the General Tires “SoCal Shootout” brought thousands of spectators and hundreds of racers to Glen Helen’s off-road truck track for round one of the Lucas Oil Off-Road Racing Series. Glen Helen was jam-packed with Pro-4 trucks, Pro -2 trucks, Pro Lite trucks, buggies, UTVs, modified karts and Junior karts. From the truck track all the way to the Glen Helen National and USGP track, there were motor homes, semi trucks and campers galore. It was a scene of epic proportions. Justin Jones is now a college student, but since he was on Spring Break he decided it was time to come out and race some motocross, even though he hasn’t raced in months. He didn’t lose any speed, but the distance got him. Photo: Jody Weisel Meanwhile, tucked away in the upper plateau at Glen Helen something else was happening — REM motocross. Normally, when the Lucas Oil Off-Road Trick series is at Glen Helen, there is no room for any of Glen Helen’s regular motorcycle events—but because the Lucas Oil truck race didn’t start until 2:30 p.m. and Glen Helen wanted to have a motocross race on Saturday, the REM races were held—with the caveat that they had to be done and gone by 2:30 p.m.. That was no problem for REM promoters Frank and Myra Thomason. They run the most streamlined program in the sport. They don’t have 24 separate motos (some with as few as 4 guys on the track). They don’t drag the program out so that racers have to spend 12 hours at the track waiting for their races to come around again. The use double-gate starts (with a second wave leaving 30 seconds after the first wave); they combine classes with similar speeds (based on lap times). They don’t cut the length of motos down for the second round. And, best of all, they get the program over by 2:00 p.m. so that racers can get home and prepare their bikes for Sunday’s races. It’s quick, it’s clean and it’s fun. Cole Tompkins (69) moves an acre of dirt on his way to third in the 450 Pro class. Photo: Jon Ortner

Unfortunately, for the hardy souls who showed up at REM this weekend, the wind was blowing out of the canyon at about 20 mph with the occasional 35 mph gust. The wind made life in the pits a pain, but, luckily, the REM track is designed so that the wind from the East is blocked by big hills and the rest of the track (and jumps) are aligned to go against or with the North or South winds. There are no cross-wind jumps on the REM race track. Thus, when the racers were on the track, they were more comfortable than when they were in the pits. It helped that the temperatures were we right at 70 degree, which for the rainy 2019 winter was warm. MXA was busy testing a boatload of bikes—and Randel Fout had to race three different bikes. This is a 2019-1/2 Husqvarna FC450 Rockstar Edition. Photo: Jon Ortner

THE BIG STORIES AT REM 450 PRO: The 450 Pro class present an interesting match-up. Swedish racer Viktor Bjorklund was challenged by Baja 1000 winner Justin Jones, son of four-time 250 National Champion Gary Jones, and up-and-coming Pro Cole Tompkins. Justin hasn’t been racing much, except for Baja, because he is busy in college, but it was Spring Break so he decided to spin some laps. Justin was the fastest rider on the track, but not the fittest (too many books, not enough laps). In both motos Justin got to the front early only to be run down by the Swede. Bjorklund’s 1-1 took the day over Justin Jones’ 2-2 and Cole Tompkin’s 3-3. Brian Bolding (33), David Cincotta (861) and Ralf Schmidt (73) chase each other through the twisties. Photo: Jody Weisel OVER-50 EXPERT: The Over-50 Expert class is always a dogfight, because REM has an incredible number of former Saddleback/Indian Dunes/Carlsbad racers from the 1970-80s on hand every weekend. The most interesting story of this week’s “Five-Ohs” was the return of former AMA Pro Craig Canoy. If you were around in the 1980s you may remember that Craig Canoy finished 5th overall in the 1986 AMA 250 West Supercross Championship (behind Donny Schmit, Willy Surratt, Tyson Vohland and Robert Naughton). This was Craig’s first time at REM and somehow he ended up in the Over-50 Intermediate first moto (which started in the second wave behind the Over-50 Expert moto). Thus, he was disqualified from those result and moved to the Over-50 Experts for moto two—which he won. But since he wasn’t in the first moto of the Expert class, he didn’t have such a hot day mathematically (although he did win two motos). Bryan Friday took the Over-50 Expert win with a 1-2 (Canoy had the other moto win). Aussie Dan Alamangos was actually second overall, but he also had scoring issues (caused by a faulty transponder). Joe Sutter was scored as second place with Mike Monaghan, who is actually over 60 years old, in third. As for Alamangos, he didn’t care about the scoring mix-up and let it slide without complaint—those Aussies are nice people. Randy Skinner didn’t crash in this sandy corner by himself. A lapper helped him. Photo: Jody Weisel Kurt Thomas was fourth in the 450 Pro class with a 5-4, but he styled for awhile. Photo: Debbi Tamietti

OVER-60 EXPERTS: The next big class on the schedule was the Over-60 Experts. This class was dominated over the last two years by former CMC number One rider Val Tamietti, but after he broke his tib/fib, Dave Eropkin stepped up to be the leader of the pack. At the last REM race Dave crashed in the sand section and ended up with a 9-1 day. He wanted to get back on top this week, but Mike Monaghan had won in Dave’s place at the last race and decided that he was going to keep on winning…and he did. Monaghan came from fifth place to gun his way up to and past Dave Eropkin for the win in the first Over-60 Expert moto.

Unfortunately, just like Canoy and Alamangos before him, Mike had logistics troubles in the second moto. Mike was racing both the Over-50 and Over-60 Expert classes, but they were back-to-back on the schedule. In the first moto the starter waited for Mike to get by checkered flag in the Over-50 class and come down to the starting line before dropping the Over-60 gate. However, in the second moto the starter forgot about Mike and dropped the gate while he was still riding through the pits. Stuck behind the second gate of Over-60 Intermediates, Mike was a minute behind his class (and at the back of the second pack). Mike worked his way through the Intermediates to get to the tail-end of the Expert pack, but got tired of futilely chasing through slower riders, and pulled over, waited for leaders Dave Eropkin, Randy Skinner and Ken Ehlers to pass and then jumped in behind them. Of course he was penalized back to last place. Eropkin won with a 2-1 over Ken Ehlers 3-3 and Jim Hanson’s 5-4.

It doesn’t matter how serious you are about your racing, every now and then you need a little guidance. Photo: Jody Weisel Lars Larsson was born in 1941, raced his first race in 1959,  moved to the USA in 1967 as Husqvarna’s first American factory rider and is still racing today. Photo: Debbi Tamietti

OVER-65 INTERMEDIATES: It what has been the “feel good” story at REM this year, former Grand Prix, ISDT, Trans-AMA and Hall of Fame rider Lars Larsson, found a new burst of speed (at age 78). He has won four times in the last handful of races and repeated his 1-1 glory this weekend in the Over-65 Intermediate class. What brought his renewal around? MXA was testing a 2019 Husqvarna TE300i fuel-injected bike and, after the initial round of testing was done, Jody Weisel told Lars that he could race it as long as he liked. With its off-road set-up and plush suspension, Lars suddenly regained the speed of a much younger man (which everyone racing at REM is compared to him) and he started winning. So what did MXA do? They took the TE300i away from Lars and put him on a Honda CRF250. His win streak came to an end. But, surprise, MXA had taken Lars’ favorite TE300i away from him to outfit it with WP Cone Valve forks, Trax shock, Rekluse auto clutch, 19-inch rear wheel and small gas tank to make it more of a motocross bike instead of an enduro bike. No surprise, Lars went right back to his winning ways. 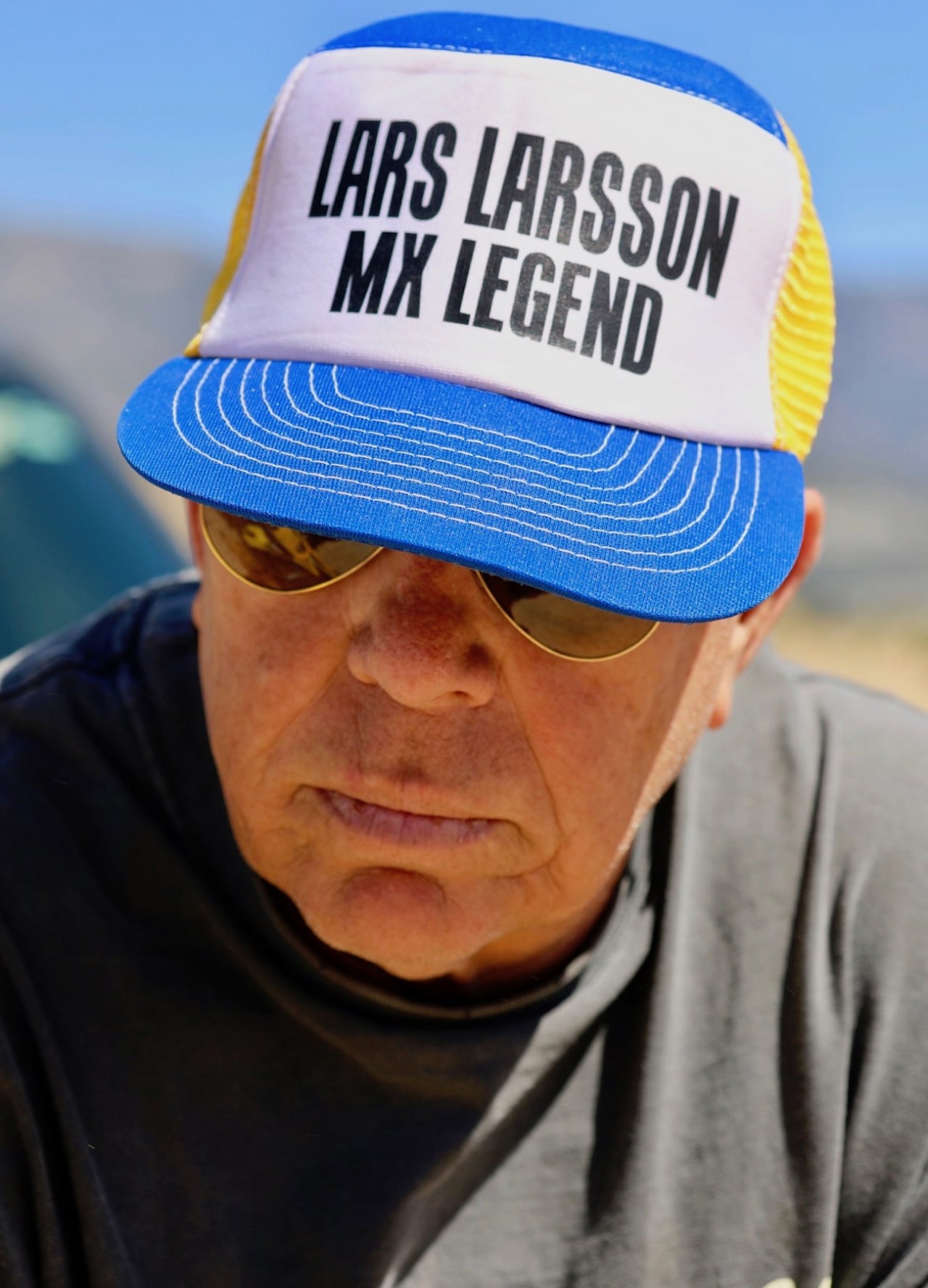 You know you are a star when your competitors print hats with your name on them to honor what you are doing. Mike Marion demonstrates. Photo: Debbi Tamietti Mike Marion (80) shows how much sand has been washed down the hills during the rainiest Southern California January and February anyone can remember. Photo: Jody Weisel Jack Phinn came back to action after a long lay-off for back problems. He raced his first Over-50 Intermediate moto and decided to save his back so he could race again next week…and the week after. Photo: Debbi Tamietti Mike Monagahan doesn’t always get it right, but he’s batting 300. Mike won the first moto of the  Over-60 Expert class, but missed the start of the second moto because he  also raced the Over-50 Experts and the two classes were back-to-back.  His 1-9 was good for 4th in the Over-60 class, while a 3-4 gave him 3rd in the Over-50 class. Photo: Jon Ortner Joe Sutter was second in the Over-50 Expert class behind Bryan Friday. He would have been third behind Bryan Friday and Dan Alamangos, but Alamangos’ transponder failed (and because he didn’t report it after he was a “no score” in the first moto, he was a not scored for the day). Photo: Jon Ortner Next weekend, Saturday, March 23, REM will be racing at the Cahuilla Creek Motocross track in Anza, California. For more info about REM motocross go to www.remsatmx.com or their Facebook page by Clicking Here.

ASK THE MXPERTS: WHERE CAN I GET A CONE PIPE FOR MY CRF450 FOUR-STROKE?