Justin Jones won the first 450 Pro moto and was leading the second moto when he blew his front tire on the face of this jump. His CRF450 whipped 180 degrees and he crashed hard. Jones came into the pits, borrowed a bike from a friend and came right back out to finish the race. Photo: Rich Stuelke

Billed as the “most important unimportant race” in America, REM Glen Helen has a reputation as one of the last holdouts of old-school, friendly, 1970s-style motocross. REM Glen Helen is a family affair, with fathers, sons, daughters and grandsons all racing on the same day. Dylan Schmoke (23) took the 450 Pro victory after Jones crashed out, but was passed by 450 Intermediate winner Trevor Stewart before the end of the second moto. Photo: Chris Alamangos Remember Chris Alamangos’ high-flying antics on his Husky TC125 two-stroke from the last REM race? This time he stayed on his bike, more or less, but missed his first moto because he was out shooting photos and forgot. REM let him race a different class to save his day. Photo: Debbi Tamietti

But what really sets REM apart other racers are four attributes that most modern race promotions lack:

(1) The AMA Pros come to REM just before the AMA Nationals start to take advantage of the long 30-minute motos in the month of April and May. And, many team manager will send a rider who claims that he has been training to REM to test his fitness. Billy Mercier backs his YZ250 two-stroke up into the cushion. Photo: Chris Alamangos Pete Murray swept both motos of the Over-50 Elite class in front of a top five of Jon Ortner, Ian Fitz-Gibbon, Willy Simons and Bob Weber. Photo: Chris Alamangos

(3) REM is where visiting foreign riders come to race. In the winter, the Swedes come to race, while the Aussies show up at the same time to avoid their summer heat. Most of the Swedes on the 2015 AMA Supercross circuit race at REM. REM awards a brand-new 6D helmet to a lucky racer every three months. David Cincotta (right) was the winner this time and 6D founder Bob Weber was there to present it to him. Photo: Rich Stuelke Swedish GP star Lars Larsson (left) and Jody Weisel (right) are never more than this far apart in the Over-60 Expert class. Lars needs rotator cuff surgery, but  doesn’t want to take the time off from racing for the recovery period. Photo: Debbi Tamietti

(4) A large percentage of racers at REM work in the motorcycle industry. It’s not unusual to line up next to the product manager from one of the big six manufacturers, or a team manager moonlighting on an off weekend, or the guy who owns the company that makes the gear you wear. REM also has more AMA Hall of Fame racers on the track than you could find anywhere else. 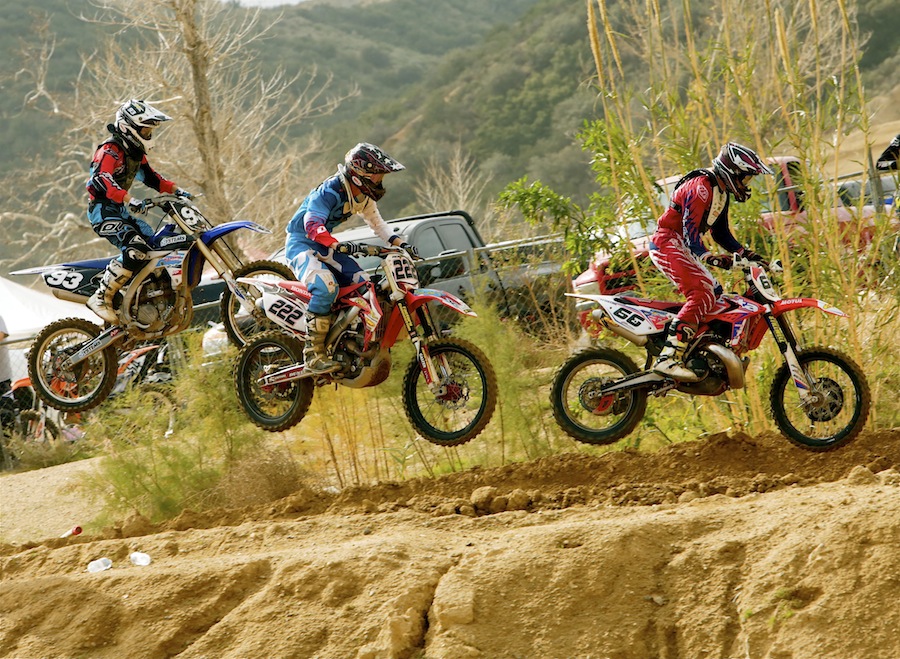 This is the race for second place in the 250 Novice class. Hayden Cole (93) would get the spot with Ty Cullins (66) third and John Roggero (222) fourth. Photo: Rich Stuelke Jon Ortner’s name will be added to the 2014 Number One Award (right next to the one he earned in 2013). Ortner is the 26th REM Champion, although multi-time winners mean that the 26 titles are shared by only 17 riders. Photo: Rich Stuelke

REM races virtually every Saturday of the year and this week’s race was the kick off for their 36-race 2015 schedule. If you’d like to join the gang, show up on any Saturday in the month of January or February — or go to www.remsatmx.com

10 THINGS YOU NEED TO KNOW ABOUT PHOENIX