Vet Pro Dennis Stapleton (184) and 450 Pro Shaun Hillion (413) collide into each other on the way to the second turn. Stapleton has pulled his left arm close to his body to try to detach from Hillion’s handlebars. Photo: Debbi Tamietti (Click on images to enlarge) Stapleton corrects after the collision, while Hillion begins to lose both ends of his bike at the same time. Photo: Debbi Tamietti. It turns out that Dennis Stapleton was the only thing holding Shaun Hillion up and, as soon as he pulled way, Hillion went spiraling out of control. Photo: Debbi Tamietti The Pro race was red flagged and although Shaun Hillion managed to walk to the medical mule, he foreshadowed Ken Roczen’s crash and torn jersey by six hours. No report on his condition yet. Photo: Jon Ortner

The Shaun Hillion crash wasn’t the only big get-off at Glen Helen this weekend, as several other riders hit the turf with a thud. Hillion was joined at the EMT’s by Gary Renko, who suffered a gash in his thigh in another multi-bike pile-up. The rash of crashes is strange for REM races, which have gone months on end without a single rider having to visit the ambulance. You have to take crashes in the Pro class in stride. These guys let it all hang out and every now and then they trip over what’s hanging out there. But, to have crashes in the Over-50 class is odd. Not that these guys don’t go faster than anyone would have reasoned 10 or 15 years ago, but they are not wild young kids. They are old men, who own companies, have responsibilities and should leave a little wiggle room when things get tight. After the red flag, the Pro race was restarted with 36-year-old AMA National veteran Dennis Stapleton (184) leading all the young Pros for half the moto. Willy Simons, Jr. (246) finally made the pass and went on to win with Norwegian Aleksander Klock second. Photo: Debbi Tamietti

Crashes aside, it was a very strange weather day, which impacted the track conditions. Early in the morning, when practice started, it was foggy. So foggy that visibility was hampered, but as the morning progressed the fog lifted just enough to bring the whole track in focus. But, the fog didn’t disappear it simply melded into an overcast day and kept moisture in the track—although the last couple weeks of 80-degree temps and high winds had sucked most of the moisture from below the watered top soil. That made for loamy corners, with shiny and rock-hard exits. It was easy to get sideways if you wanted to—and even easier if you didn’t want to. But, SoCal racers are used to varying dirt conditions from corner to corner. They adapt to the loose to slick corners without too much drama.

There were riders from France, Belgium, England, Holland, Norway, Chile, Argentina, and Sweden on the starting lines. These two guys have engaged in a weekly war in the Over-40 Expert class every weekend for the past two years. This time, TM-mounted Ralf Schmidt (73) took the win, while David Cincotta (861) settled for second.  Photo: Jon Ortner

If you’re over 40 years old, the weekly REM races are a paradise. No minicyles, no loud music, no speeders in the pits, no mini dads. That doesn’t mean that there isn’t the potential for those things, but the calming influence of the established racers puts a damper on the things that are most irritating at most big amateur races. Things run smoothly at REM—the racers come in early, set up camp and are almost always done and gone by 2:00 p.m. (after racing two long motos). There are 22 moto at most big amateur races. This weekend there were only six motos at REM. How do they do it? Each moto has two gates, leaving at 30 second intervals, small classes are are bunched together, but scored separately. By combining the races, filling the gate twice for each moto, not wasting any time and scoring by transponder, you can race REM and still make it home in time to play with your kids (although in most cases the kids of REM racers are about 28 years old by now). 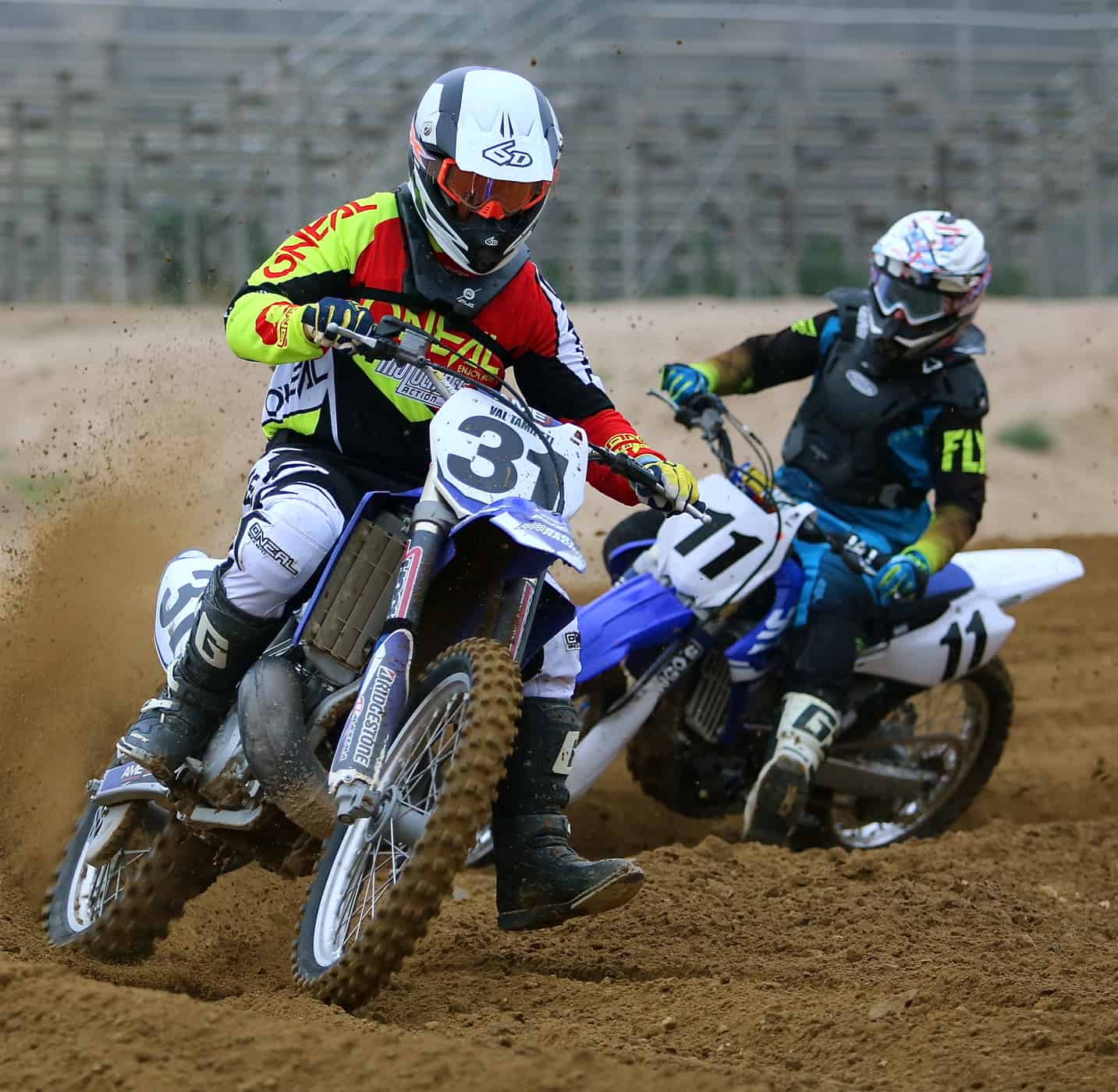 Val Tamietti (31) won the Over-60 Expert class, Here, in practice, Over-50 Expert Kevin Montgomery (11) tests Val‘s speed to see what’s a store for him in about 10 years. Photo: Rommel Andrade

Imagine a race where the biggest classes are the Over-50 and Over-60 classes. Most tracks don’t have any riders over the age of 60—REM has over 20 of them every weekend. And the Over-50 crowd is even bigger. There were 50 of them on Saturday. Now, when you add in all the Pro, Intermediate and Novices, not to mention of the Over-30 and Over-40 classes, you get a healthy turnout of experienced racers. Plus, REM has a race promoter who races his own track — thus he can accurately address any rider complaints.

What follows is a photo essay to this past Saturday at Glen Helen. You shoulda been there! As is the tradition at REM, upcoming 250 Pros sign up for the 450 class to challenge themselves against the big boys and big bikes (and to vie for a bigger payday). It worked out for Willy Simon, Jr. as he took the 450 win on his YZ250F. Photo: Debbi Tamietti. The REM racers have acclimated themselves to 80 degree weather, so they were surprised that Saturday was very foggy and only 70 degrees. Joe Pena (911) must have liked the cold weather because he finished 4th in the Over-60 Experts and raced in the Over-50 class to get more riding time in. He won that class. Photo: Debbi Tamietti Argentinian Sebastian Pakciarz (47) was nervous about the competition in America, so he signed up as a 250 Beginner, but as you can see above that he had skills. It is always tough for foreign riders to know what class to race in, so they often drop down a class or two. Photo: Debbi Tamietti Argentinian Julien Seibel (75) won the 250 Intermediate class with a 1-1 day, but we noticed that he has signed up to race the FIM 250 Argentinian Grand Prix on March 4, 2018. What is Spanish for “cherry picker?” Photo: Debbi Tamietti 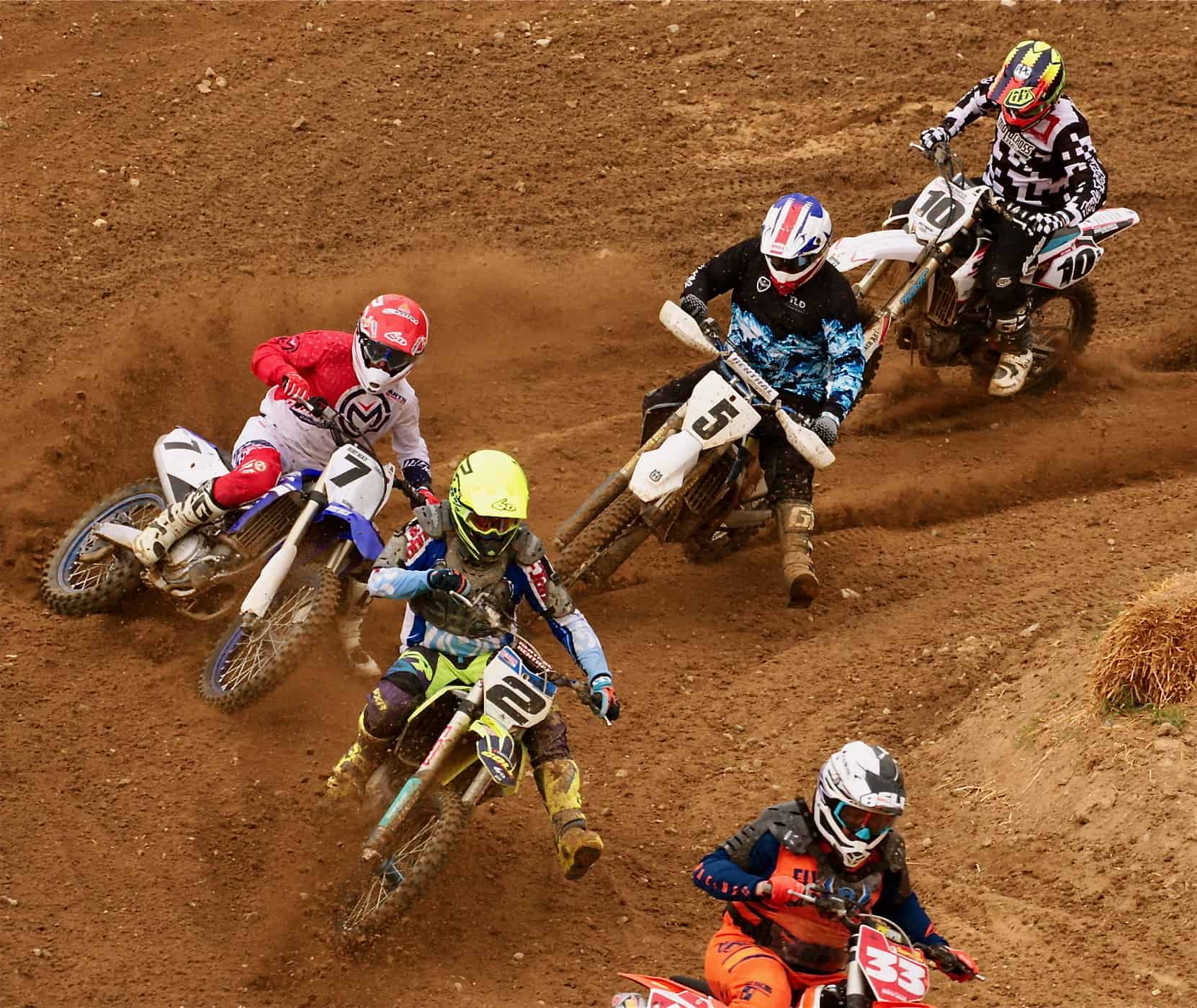 in the combined Over-50 Expert/Elite class, Elite riders Luther French (2), Pete Murray (7) and Jon Ortner (10) had a little traffic to contend on their way to the front. Most notably, Ron Shuler (33) who would win the Over-50 Expert class, while Ray Poltack (5) went 7-5 for seventh. Photo: Debbi Tamietti There is no doubt that Pete Murray, a two-time World Vet Champion (in the Over-40 and Over-50 Pro classes) was going to win the Over-50 Elite race. Except that he didn’t. While trying to get to the lead quickly on lap one of moto two he swerved uncontrollably off the track in front of oncoming traffic. They crashed trying to avoid him, but not avoid each other. Murray’s buddy, Gary Renko took a footpeg to the thigh in the crash, while Luther French and Jon Ortner would go 3-1 and 2-2 to beat Pete’s 1-3. Photo: Debbi Tamietti 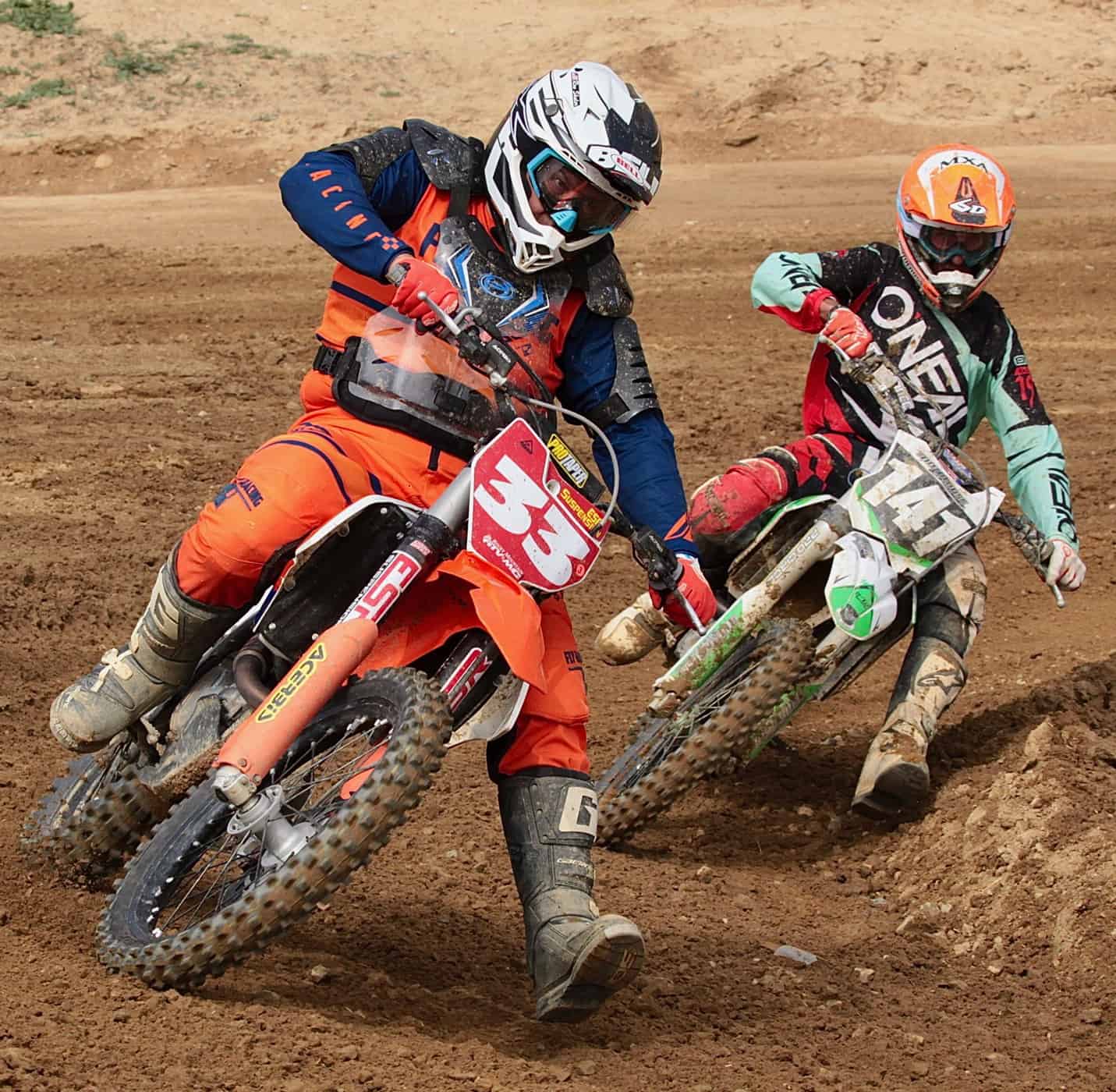 One of the dangers of winning your class too many times is that you could get moved up…and you know that Over-50 Expert winner Ron Shuler does not want to end up in the Over-50 Elite class (reserved for former AMA National riders). Luckily, REM’s promoters compare lap times before moving a rider up. Shuler is safe for now. Photo: Debbi Tamietti 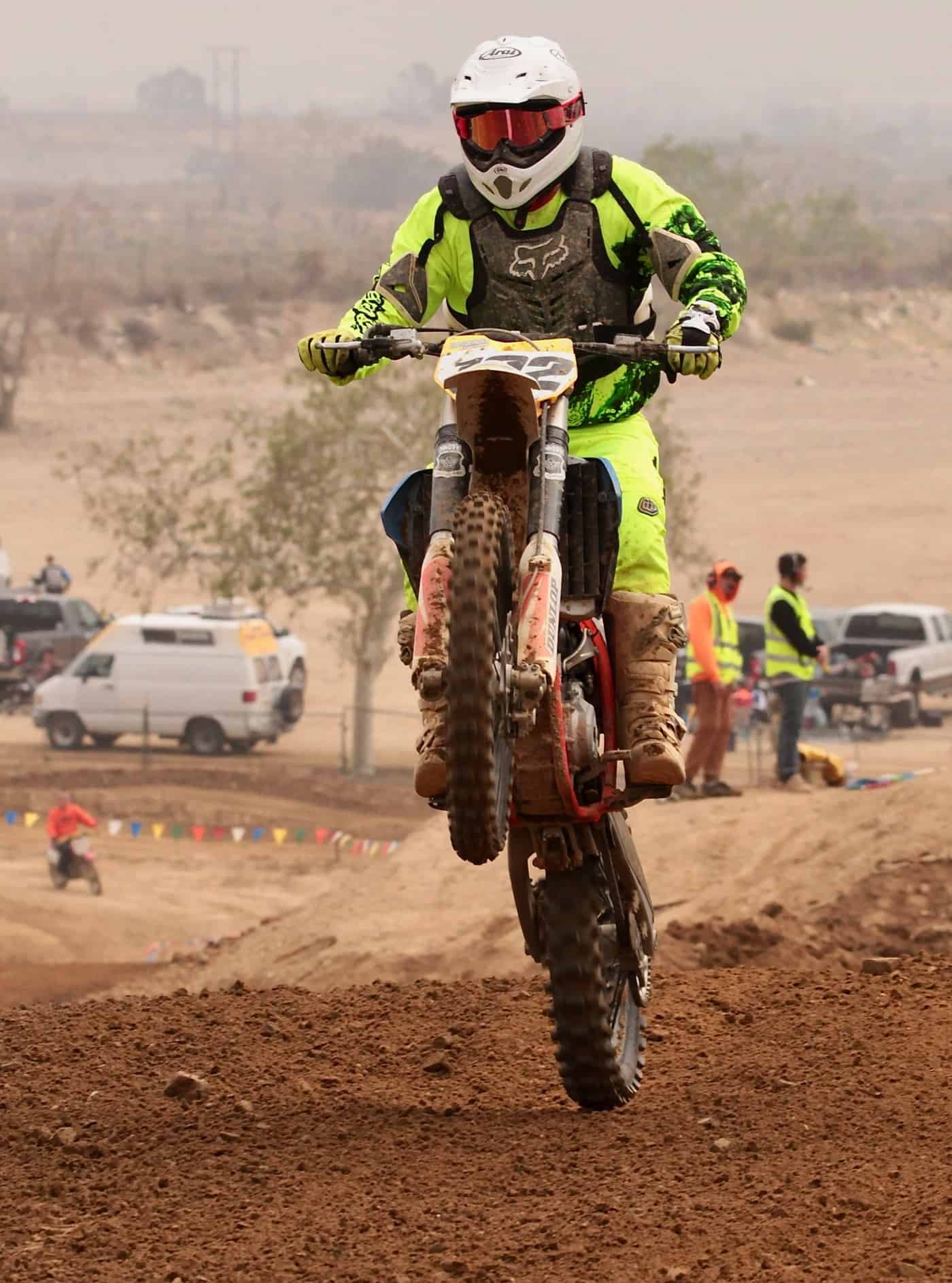 Randy Skinner is riding injured—with a bad back and bad wrist. His wrist is so bad that Jody Weisel gave Randy his Mobius wrist brace to wear while Jody waits for his doctor’s release (it also appears that Randy also borrowed Jody’s #192 bike also). Photo: Debbi Tamietti Ernie Becker (32) switched to MXA’s 2018 KTM 250SX two-stroke for the day. He hasn’t ridden a two-stroke in a decade and was shocked how hard it hit and how high it went. Note the fog muting the normally blue skies. Photo: Debbi Tamietti Ever heard the term Yama-thumb? This is what it refers to. Photo: Debbi Tamietti MXA has been testing lots of parts on our 2018-1/2 Husqvarna FC450 Rockstar Edition since we got in back in December. Josh Fout (78) raced it Saturday, but was recovering from some injuries that he got at the King of the Hammers offroad race last weekend and took it easy. Photo: Debbi Tamietti Meanwhile over at REM’s Kids track, which is a very Pee-Wee friendly race track, designed to help young kids learn the ins and outs of racing in a safe environment, Ryder Larson (7) is considering a little leg swag, but decided against it. Photo: Debbi Tamietti Ryder’s mom gives him advice—which was probably, “Don’t think about doing any of that leg swag stuff.” Photo: Debbi Tamietti

REM’s next race is on Saturday, February 17. For more info go to www.remsatmx.com

THE NEXT REM RACE IS ON SATURDAY AT GLEN HELEN