Everybody fell during this weekend’s REM races, but Zac Commans fell the least, as his 1-2 took the overall win in the 450 Pro class. Commans, Ryan Surratt and Austin Howell engaged in an all-out war.  Photo: Dan Alamangos

Every race day is different. Sometimes they are all gimme races, where the riders go 1-1, 2-2, 3-3, 4-4, 5-5 on through the pack. And sometimes the winner isn’t decided until the last lap. And so it was at REM this weekend as the high-profile classes were free-for-alls with the actual winner often decided in the final run to the checkered flag. And, on this Saturday, even if the final score said that a rider went 1-1 —it doesn’t tell how far back he was on lap one or how many battles he had on the way to the front. It was a great day of racing in SoCal. Austin Howell (3) was leading the first 450 Pro moto when he tried to flat track the fast sweeper. Let’s just say that Austin does not have a career in dirt track, as he was whipped out of first place like a rag doll. He still managed to get second in moto one, but got a flat tire in moto two.  Photo: Rich Stuelke 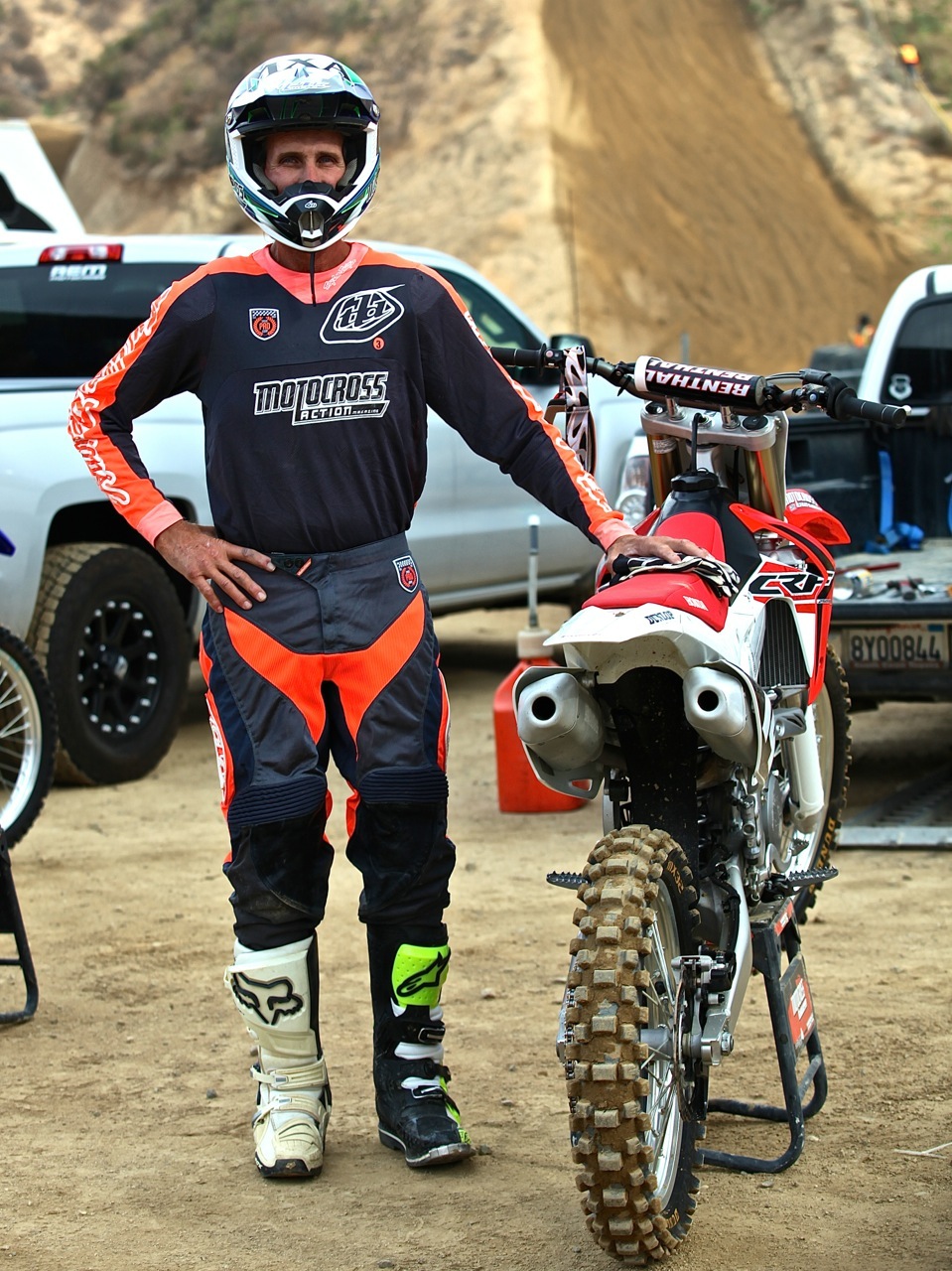 Notice anything odd in this photo. Randel Fout broke his ankle back in May and eventually had it plated. This was his first race back, but he discovered that his broken foot had swollen so much, even six months later, that he couldn’t get it in his boot. So, he wore one normal boot and one big boot.  Photo: Debbie Tamietti Tristan Miller (351) has become a force to be reckoned with in the 250 Intermediate class at REM. Miller, Michael Mosiman, Willy Simons, Jr., Renton Minuto and Gage Schehr fought hard for every inch..  Photo: Debbi Tamietti Mitchell Falk raced a KTM 125SX two-stroke, in the two-stroke class, but found himself at the front of the 250 Intermediate class after leader Tristan Miller crashed in a rut. Falk led almost all the way to the finish line, but Miller got him back on the last lap.  Photo: Dan Alamangos 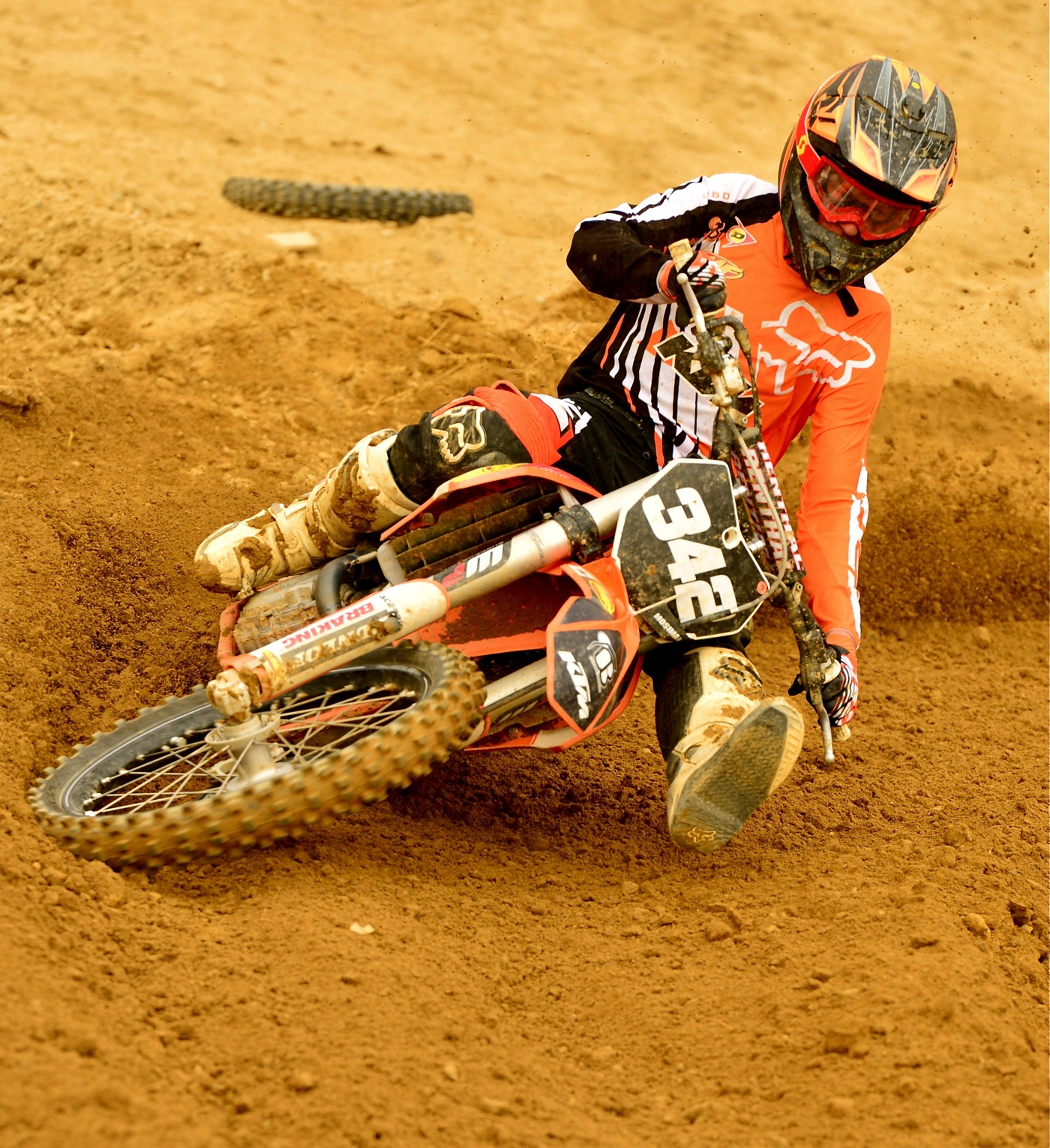 Michael Mosiman hasn’t been able to put two solid motos together to take the 250 Intermediate win at REM. He was second again this weekend with a 3-2 day behind Tristan Miller, but in front of Willy Simons Jr.’s 2-3. Photo: Dan Alamangos You don’t see this very often at REM because of the big hills, but REM promoters Frank and Myra Thomason held a special exhibition PW50 race for Ty and Tanner Payton. They raced at half-time and drew a big crowd to the fences to watch the twin sons of Pro Circuit’s Mitch Payton race each other. It was their first race.  Photo: Dan Alamangos 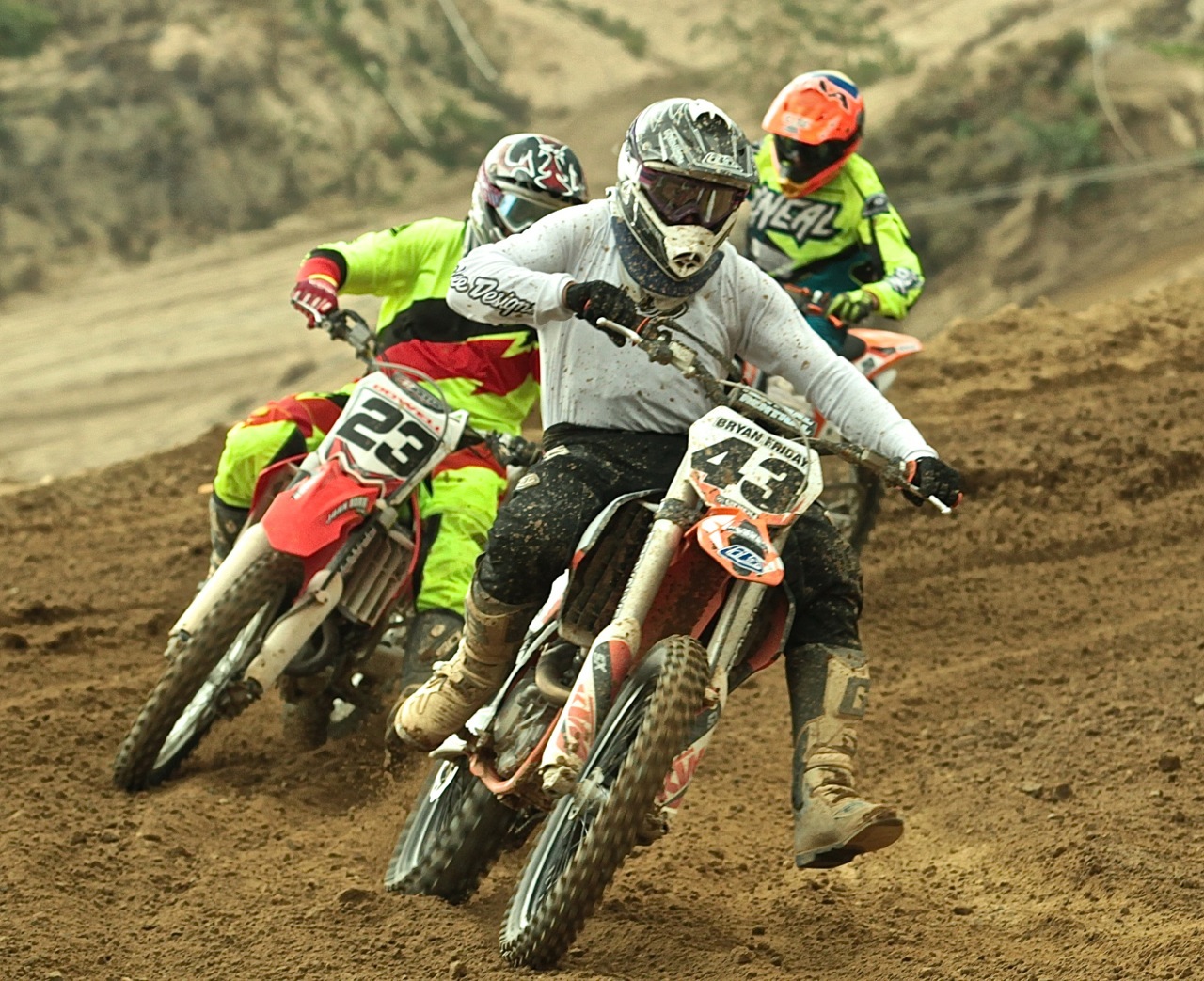 This was the battle for the lead in the first Over-50 Expert moto. In the course of the moto each of these three riders passed back and forth several times. Eventually Phil Dowell (23) would win the moto and the overall, while Bryan Friday (43) would go 2-8 for 4th and Dan Alamangos 3-11 for 7th. Photo: Debbie Tamietti Two riders moved into the Over-50 Expert class this weekend and aquitted themselves quite well. Tony Schuler (314) was second overall, while Chris Cole got sixth.. Photo: Debbie Tamietti Willy Simons, Sr. continues to be the fastest rider at REM on a weekly basis — with one caveat. We are talking about riders born before 1964. Photo: Debbie Tamietti This is the long line of the Over-50 Intermediate class. Shy Moshe (1-2) leads with Terry Varner (L7) in second. Harley Hall would win the class, but he’s behind all of these riders at this point in the race. Photo: Debbie Tamietti Former Indian Dunes number One Pro Will Harper had “KZ” on his number plates in memory of his friend Kenny Zahrt, who passed away the day before the REM race of a stroke. Zahrt was only 59. Photo: Dan Alamangos Bill Seifert (37) is an old Saddleback Specialist, one of a handful of Saddleback guys still racing (all of which are at REM every week), Bill went 6-6 in the Over-60 Expert class. Photo: Debbie Tamietti We don’t know what you’ll be doing when you are 73 years old, but former GP, Trans-AMA and AMA National rider Lars Larsson is still hammering out laps. Lars is a three-time World Vet Champion and AMA Hall of Famer. He was also one of the original founders of Thor with his buddy Torsten Hallman. Photo: Debbie Tamietti 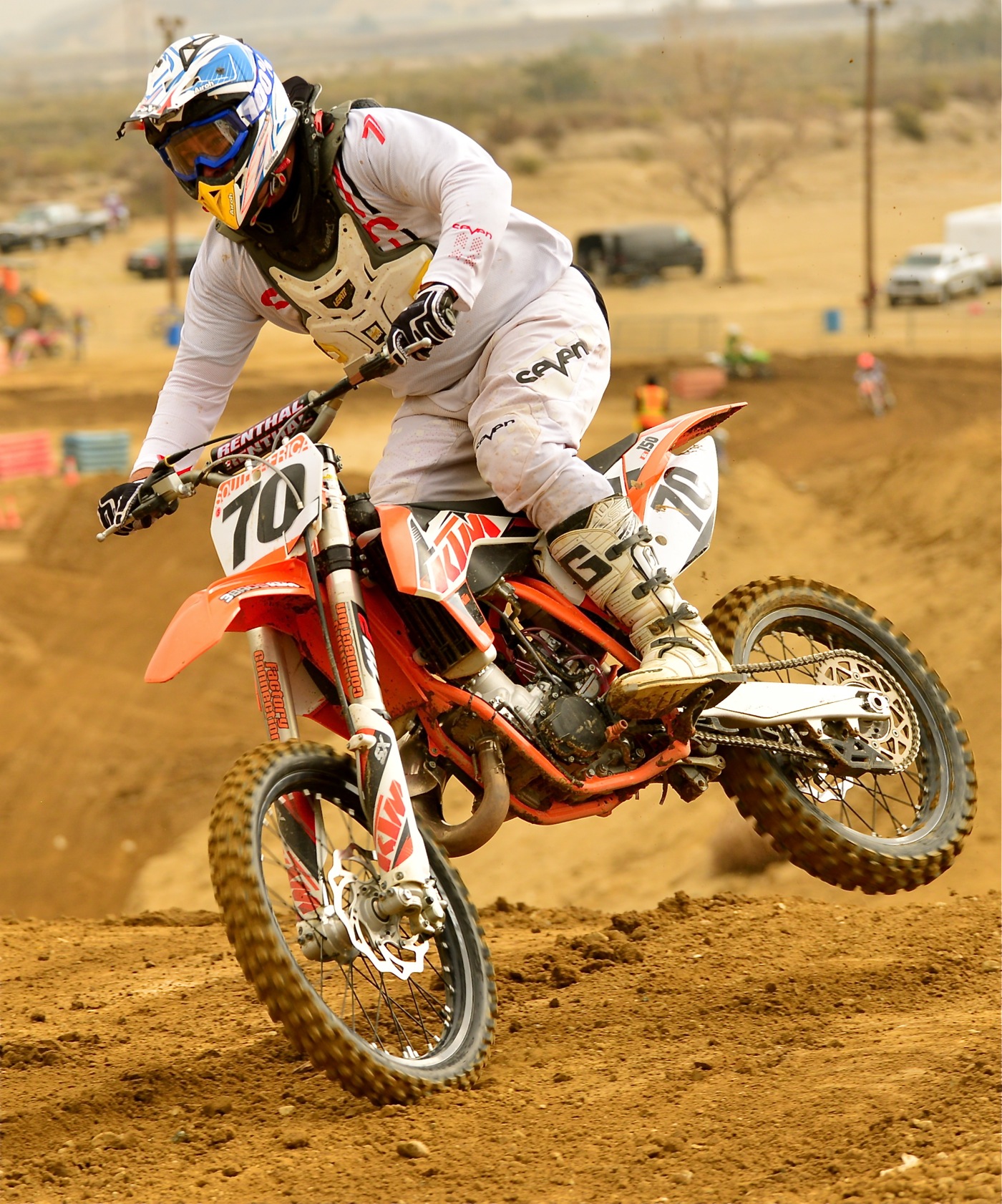 Perhaps the strangest pairing at REM Glen Helen is South African Alan Julien and his KTM 150SX two-stroke. Alan is a big boy, but he knows how to make a two-stroke sing. He holeshot the Vet class and went 1-3 for second overall. Photo: Dan Alamangos 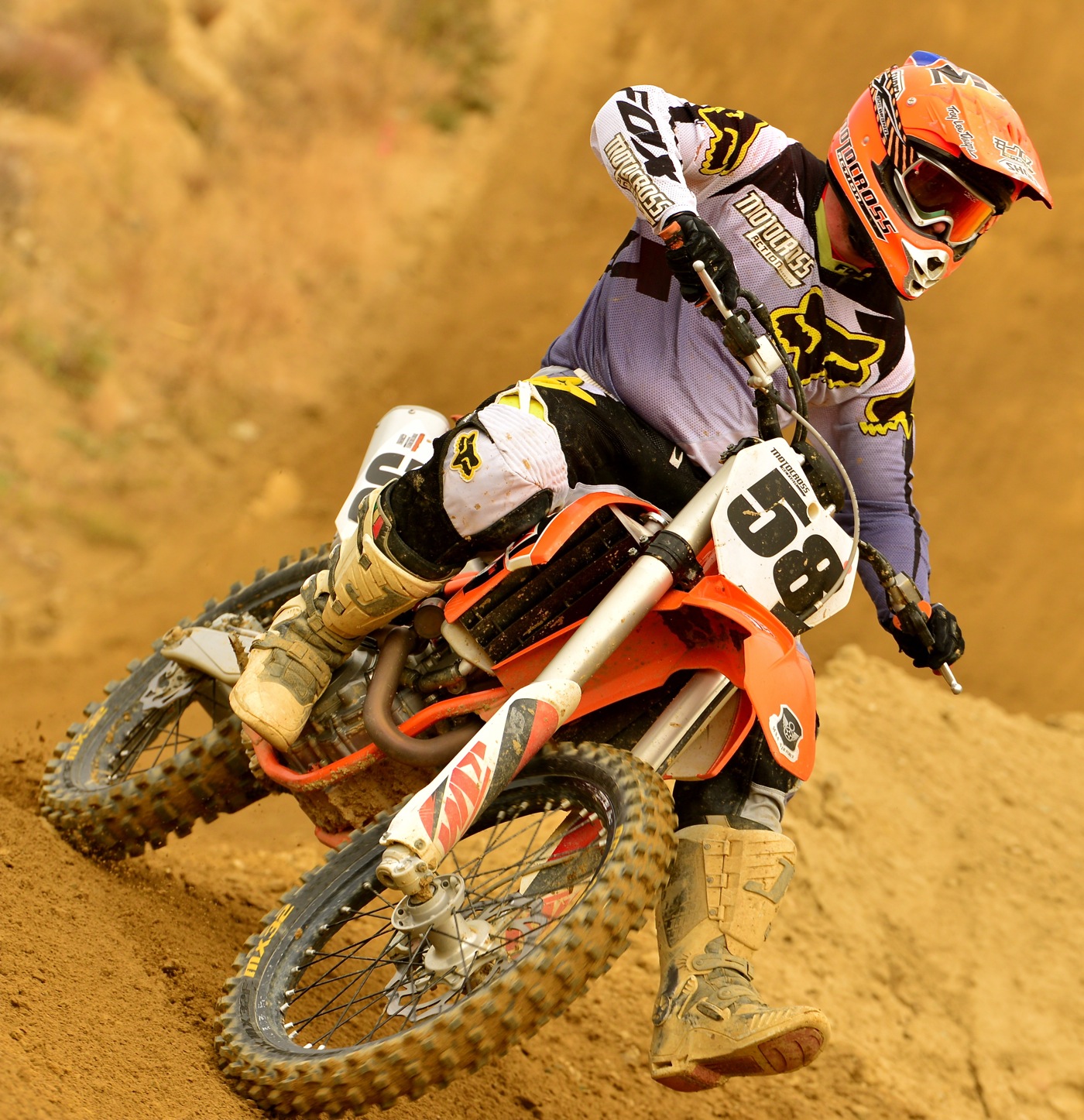 Tom Hinz (58) was back racing after a long lay-off, a wedding and a giant honey-do list. Tom didn’t have much ring rust as he got fourth in the Vet Novice class. Photo: Dan Alamangos

REM races next Saturday, May 22. REM will be off on the 29th to make room for the Day In The Dirt, but will be back ina ction on every saturday in December. For more info go to www.remsatmx.com