Last week Trevor Stewart (75) finished second to Dakota Tedder, but this week he powered his way to the front of the second 450 Pro moto to take the overall with a 2-1 in front of Dominic DeSimone’s 1-2. Photo: Debbie Tamietti 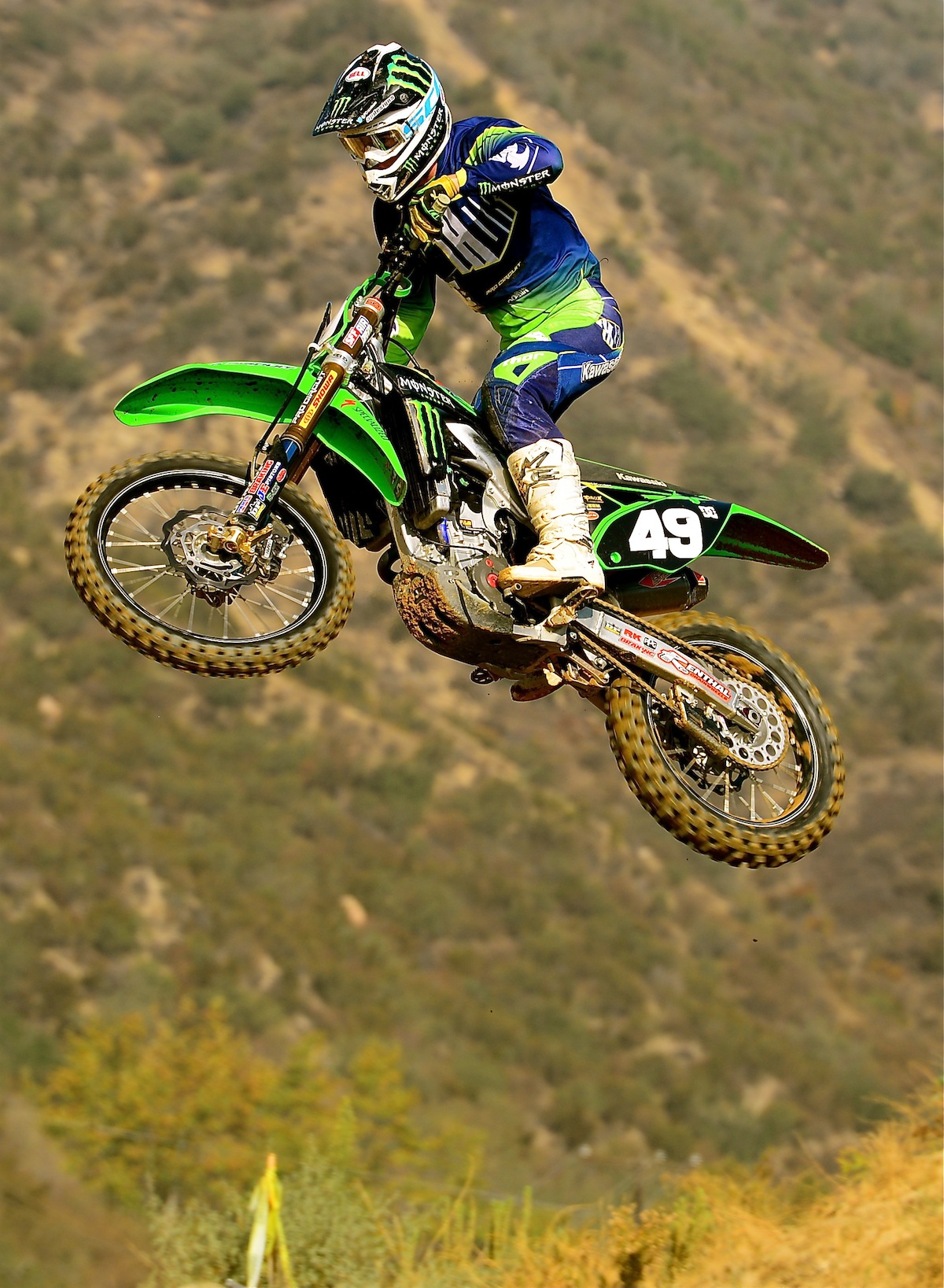 Zac Commans has been missing from the scene for the last six month while recovering from injuries. He’s back. Zac won the 250 Pro class and ran in front of the 450 Pros for large chucks of both motos. Photo: Dan Alamangos

The weekly REM motocross races have three more races before the United States Grand Prix break. REM will race on August 29, September 5 and September 12. There will be a two-week break for the USGP and then REM will return for four races in October. For more info REM, go to www.remsatmx.com However, Zac Commans’ long layoff did leave him open to the occasional mistake. Here’s one, but he got up to keep the 250 Pro lead. Photo: Dan Alamangos Husqvarna’s Andy Jefferson brought out the first 2016 Husqvarna FC350 in the country and powered it to come-from-behind charges to second in both motos of the Over-50 Elite class. Photo: Chris Alamangos Carson Mumford just signed a six-year deal with Geico Honda, although he is still wearing his Kawasaki gear, while racing a Honda CRF150. Photo: Dan Alamangos Gavin Leachman doesn’t have a six-year deal with a factory team, but that didn’t stop him from beating Carson Mumford in the 85 Expert class. Photo: Debbie Tamietti Before the day even started former CMC Number One Val Tamietti declared that he was going to get the holeshot in the Over-50 Expert class. Val not only got one holeshot, but his 2-1 took the overall win in front of Bryan Friday (3-2), Dave Eropkin (6-3), Ron Shuler (5-4), Phil Dowell (4-5) and Luther French (1-10). Photo: Debbie Tamietti 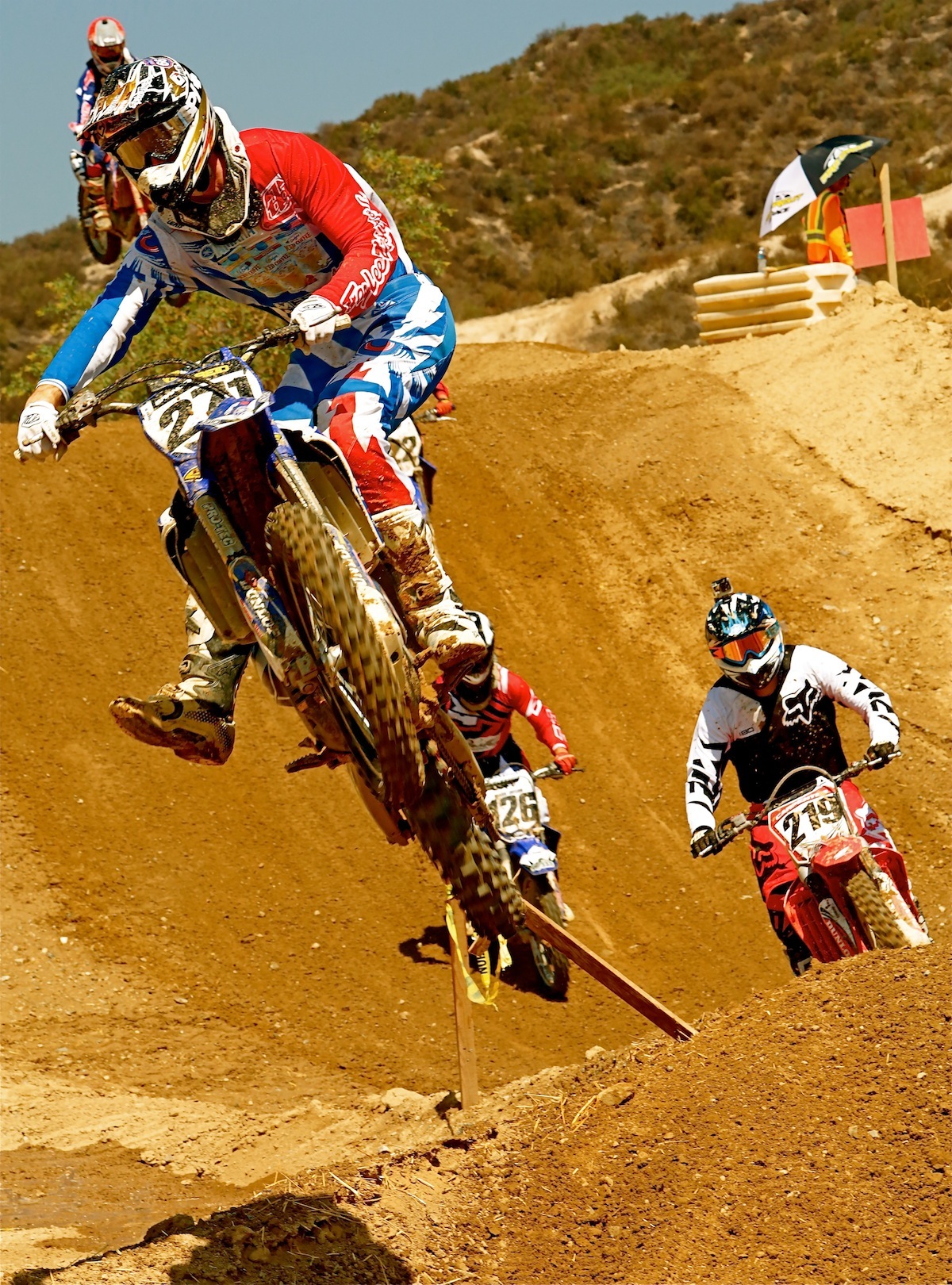 Brandon Reid (271) gets crossed-up for the enjoyment of Jeff Carpenter (219), who didn’t enjoy it that much. Photo: Rich Stuelke ISDE Gold Medal winner Justin Jones (3) was back on a bike for the first time since being hit by a truck while leading the Baja 500. Justin didn’t race hard, but contented himself with doing laps in the back of the 450 Pro class. Photo: Dan Alamangos It’s no secret that MXA thinks that the best way to test motocross bikes is to race them. To this end, the gang spends every weekend at the races. We take the new bikes in question and race them in as many classes as possible. It’s not unusual for the same bike to be raced by 3 different test riders or for test riders to race different bikes in each moto. For the masthead MXA guys (Jody Weisel, Dennis Stapleton, John Basher, Daryl Ecklund, Tom White) to do this by themselves would be a epic task, so MXA employs a fleet of endurance test riders (as many as 10 a week). Their job is to test things, break things, compare things and argue over who gets to race which bike (although they don’t get to pick—they are assigned bikes). At REM this week, MXA had Dan Alamangos, Jon Ortner, Chris Alamangos, Mark Hall, Randy Skinner, Marc Crosby, Randel Fout and Ford Heit on the bikes. For their efforts, they get to race brand-new 2016 bikes, made fun of by their test crew buddies and, if they are lucky, have their photo shot by Debbi Tamietti. Their weekly feedback and list of broken parts gives MXA a vast reservoir of test bike knowledge before any bike test is written. MXA’s Vintage editor Tom White took time off from administering his motocross museum to go 7-7 in the Over-60 Expert class on a 2016 KTM 350SXF. Photo: Debbi Tamietti Jon Ortner is still searching for the “Magic Bike,” but after winning both motos of the Over-50 Elite class, he probably thinks that it’s the 2016 Yamaha YZ450F. No matter, MXA won’t let him race the same bike next weekend. Photo: Chris Alamangos Chris Alamangos has a unique cornering style on the 2016 KTM 125SX two-stroke. We can reliably report that you don’t want to imitate Chris’ technique. Photo: Dan Alamangos Randel Fout wings MXA’s 2016 Yamaha YZ250F out of a banked downhill turn. Fout was one of four MXA test riders to race the YZ250F on Saturday Photo: Debbi Tamietti Marc Crosby glances at the camera lens as he puts the power to the ground on MXA’s 2016 KTM 250SXF. Photo: Debbi Tamietti Dan Alamangos loves the challenge of being an underdog. His bike this week? A Yamaha YZ125. How did it go against a field of 450s? Check the roost on his bike and body. Photo: Chris Alamangos