REM GLEN HELEN “UN-RACE”: WHEN THERE IS WORK TO BE DONE YOU NEED A WORKSHOP ISDE Gold Medal winner and multi-time Baja Champion Justin Jones has an eye for accuracy. There is no room between his boot and the berm and only one-inch between his handlebars and the berm. Photo: Dan Alamangos Hollywood stuntman Will Harper is between movies and wants to get in as much riding as possible before he has to be on set in Australia in a couple weeks. Photo: Dan Alamangos

An “Un-Race” is nothing special in the world of motocross. It differs from any other practice day only in that it is a practice day set aside for REM racers and their friends. “Un-Races” are held on Saturday’s when REM does not have a regular race scheduled and are used by REM racers to hang out together, engage in mock battles on the track and fine tune their bikes on the actual track they race on. Mechanix Wear’s John Caper was at the “Un-Race” getting ready for the 2019 Mammoth Mountain Motocross—which is only 10 months away. Photo: Dan Alamangos

“Un-Races” were started by the MXA test crew years ago so that they could have a prepped track to themselves for testing on weekends when there weren’t any races. The “Un-Races” gradually grew from very small affairs with only 10 riders to over a 100 as REM racers found out that the track would be well-prepped on off-weekend Saturdays. The turnouts were big enough that the Glen Helen staff threw more effort into working on the REM track for Saturdays—aided by the fact that the MXA guys cajoled Glen Helen in full race prep (and pitched in to water the track throughout the day). Josh Fout was one of three test riders assigned to test exhaust pipes on the 2019 KTM 350SXF. Photo: Dan Alamangos

It was a homegrown thing that helped MXA, gave lonely REM racers a chance to hang out, added a track to SoCal’s already full agenda and attracted more riders through Glen Helen’s front gate. It did well enough that even if the MXA crew is out of town or too busy to do an “Un-Race,” Glen Helen makes it happen anyway. 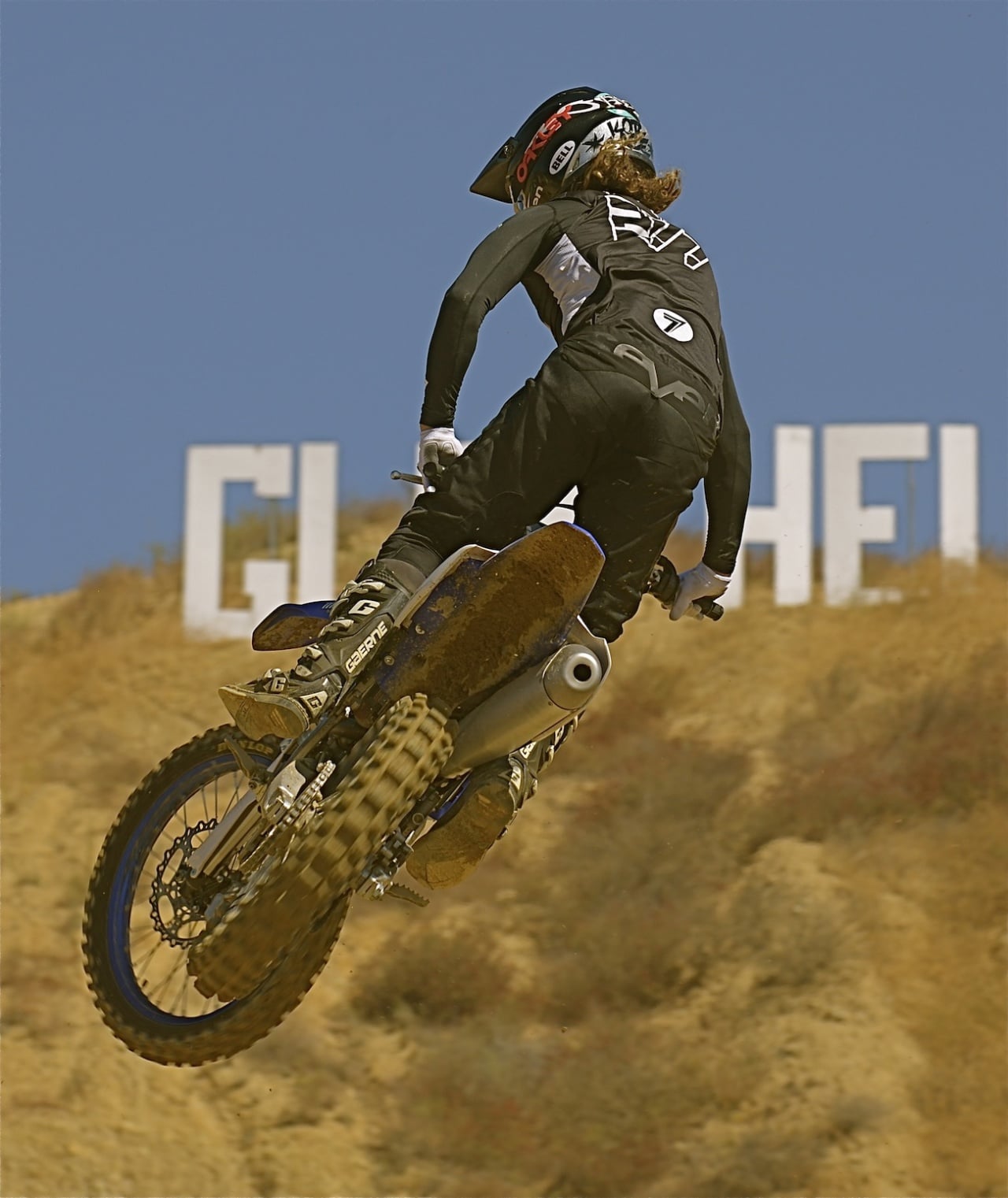 Just in case Kordel Caro forget where he was, there is a giant “Glen Helen” sign above the REM track. Photo: Dan Alamangos

This weekend the temperatures were over 100-degrees and MXA told Glen Helen that they could shorten the regular REM track so that it would be easier to water by fire hose. On a 100-degree day the track dries out so fast that it has to be watered almost constantly—and if you have ever dragged a fire hose around a race track on a hot day, you know how much work it is. For this reason the big hills are not used at “Un-Races,” but normally an “Un-Race” layout is longer than what Glen Helen runs for Thursday practice or was run on this very hot day. Remember, a handful of riders are watering the track for the whole group. It’s a thankless job and for those good souls, it’s very hard to water the track and then go ride five minutes later. Just another day for the MXA wrecking crew. We took all six 2019 450s to the track for the umpteenth time to do round-robin testing—this time focusing on Vet riders as we work towards our 2019 450 Shootout. Photo: Dan Alamangos

There was an REM race last Saturday, September 1, and will not be another REM race until September 29. That adds up to three weekends without the REM gang getting together. And, because of scheduling, this weekend, Saturday, September 8, was the only week that the REM track would be available for an “Un-Race,” because on September 15 and September 22, the whole Glen Helen facility is being used for a WORCS race and a Lucas Oil Off-Road Truck Championship event. Thus, the only way to shorten the three-week gap down to two weeks off, was to hold an “Un-Race” this week. Randel Fout is the typical SoCal surfer. He lives on his boat in Oceanside Harbor, surfs almost every day and never misses an REM race. The only kink in this fable is that Randel is from Michigan, where he was a Pro. Photo: Dan Alamangos

“Un-Races” are nice because most REM racers are friends, and as with all friends, they like to ride together. Plus, they often bring a friend with them who used to race back in the day to show them what it’s like—and hopefully restart their motocross career. And while the National track is open for practice at the same time as the “Un-Race” the crowd at the REM track is often bigger than on the National track as riders filter over to see what’s going on. 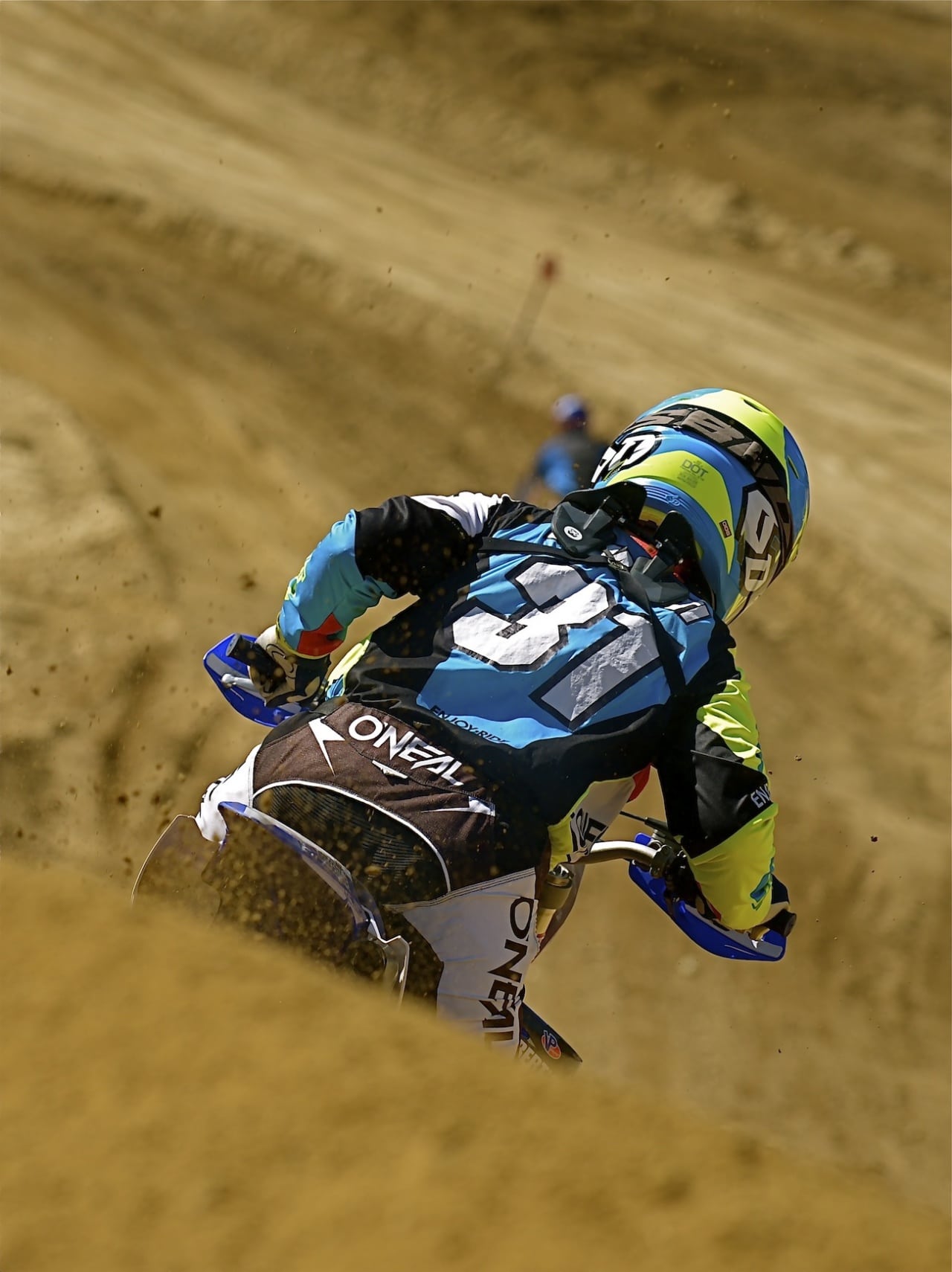 Val Tamietti cranks his Yamaha YZ250 two-stroke down a steep drop-off with his next target in sight. Photo: Dan Alamangos

Once REM returns to action on September 29 and October 6, the next “Un-Race” date would logically be on October 13, but that is the date of the Glen Helen 24-Hour Endurance Race—which uses the REM track as part of their 20-minute per lap course. After that weekend comes the October 27th REM Octobercross on the National track and the November 3-4 Dubya World Vet Championship. 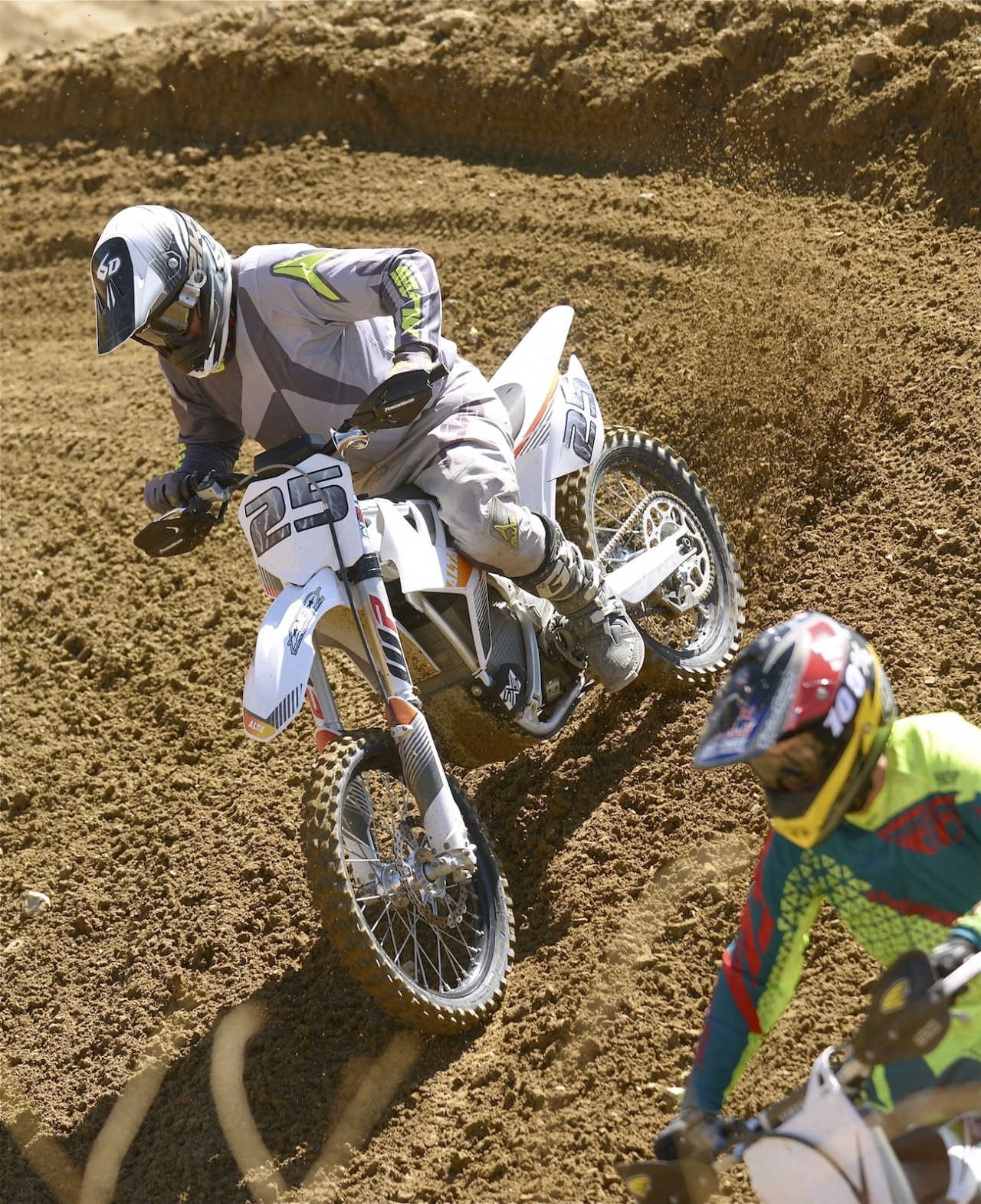 Steve Rawson rode his Alta to fame at Mammoth Mountain this year by holeshotting a moto on the electric bike. Here, Steve silently sneaks up on another rider. Photo: Dan Alamangos Dan Alamangos was very busy Aussie at Glen Helen. He rode seven different bikes and in between shot photos of the other riders. Photo: Josh Fout 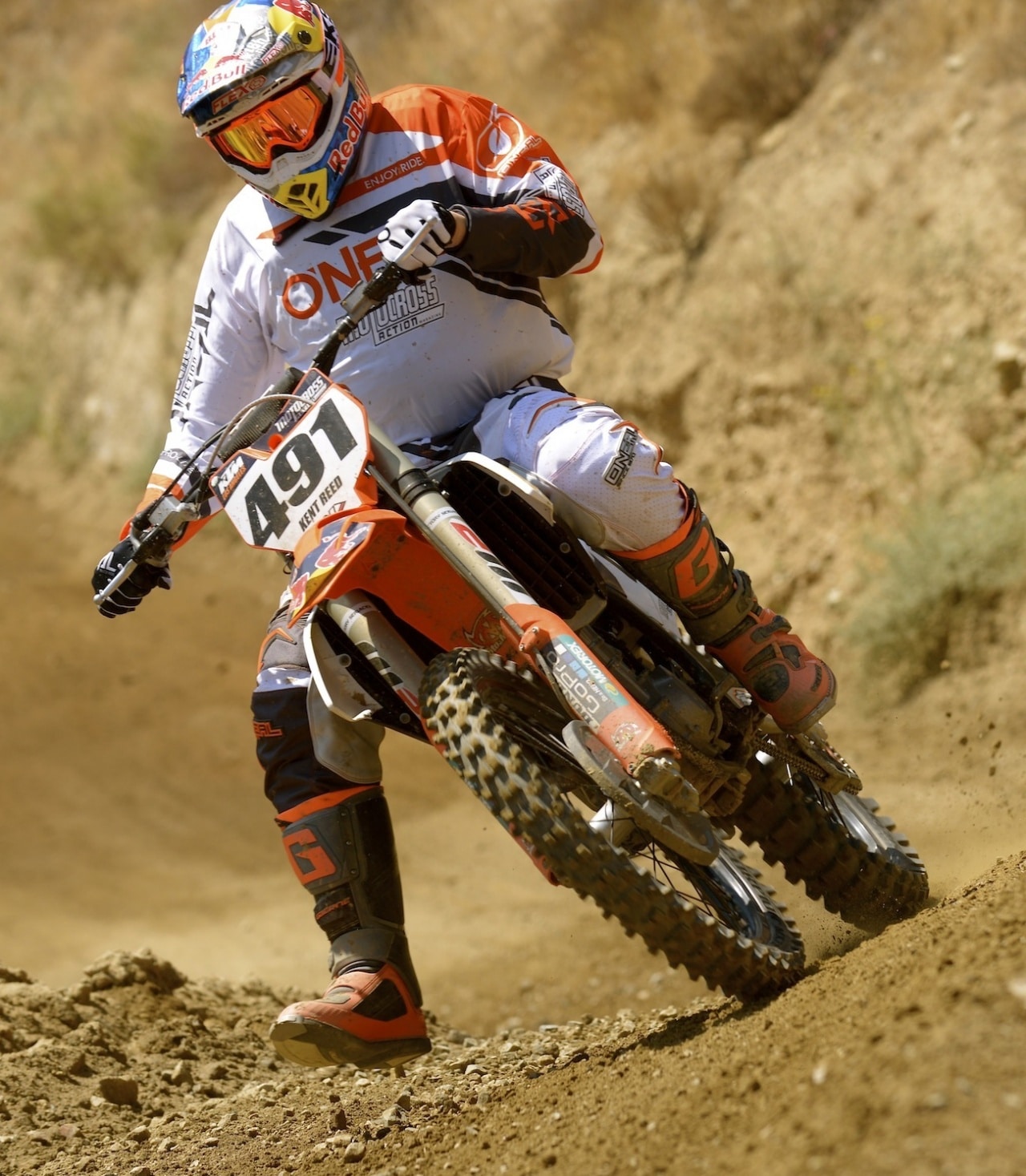 Between napping, working on his bike, watching other people work on his bike and talking on his phone (he carries three phones) Kent Reed managed to do the least laps per hour of any rider at the “Un-Race.” Photo: Dan Alamangos On REM race days Lamont Dusseau works in the sign-up booth and misses most of the practice sessions for his race. The “Un-Race” was a chance for him to get in all the laps be wanted because there is no sign-up at an “Un-Race.” Photo: Josh Fout AXO, Sinisalo and Alpinestars designer Kenny Safford was putting time in on his 2019 Honda CRF450—although he had to borrow a KTM part from Kent Reed to keep it running. Photo: Dan Alamangos You can’t tell it from this angle, but Fred Nichols is in the middle of a steeply banked 180-degree hairpin that gains about ten feet of elevation in 50 feet of turn. Photo: Dan Alamangos 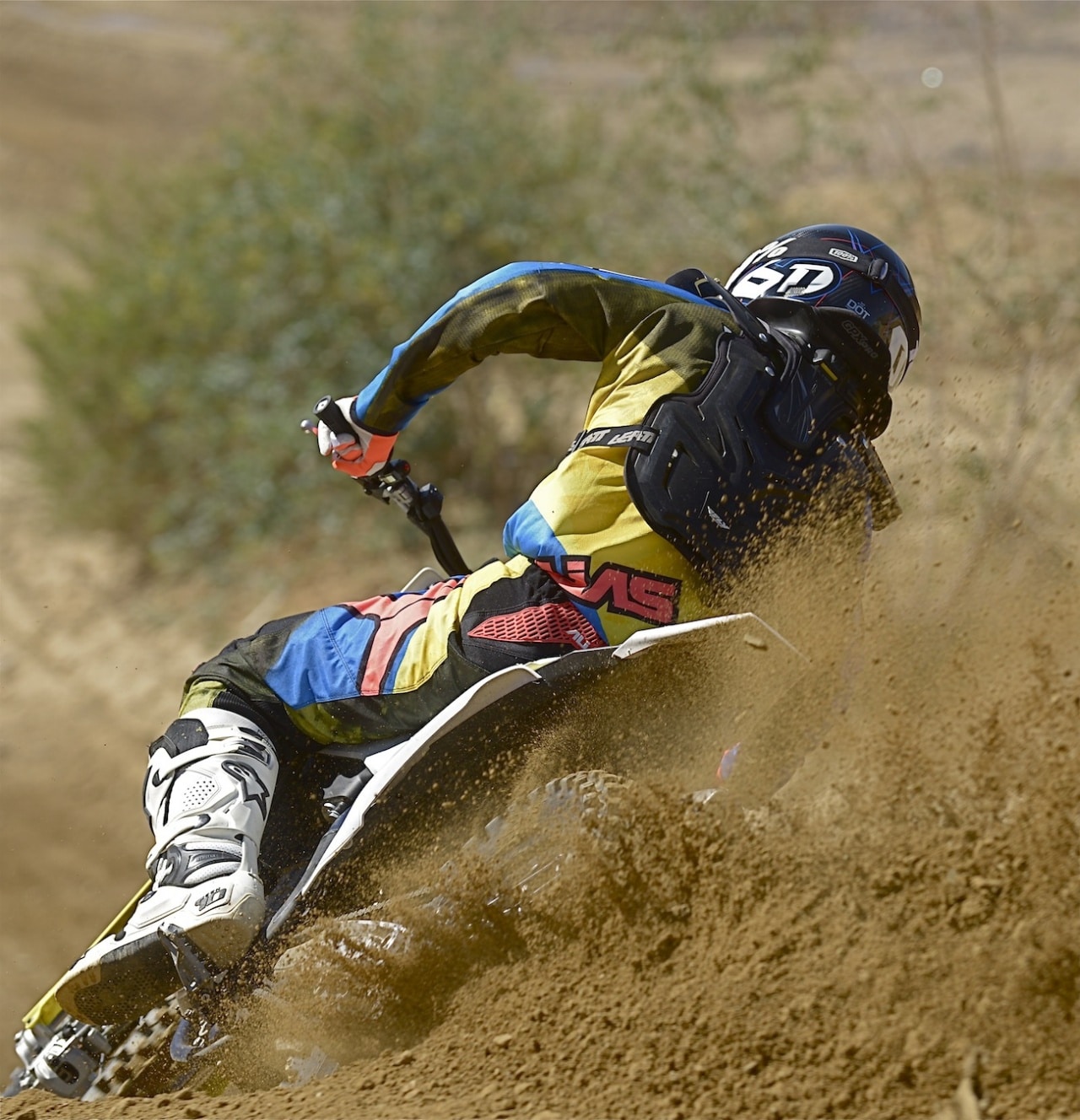 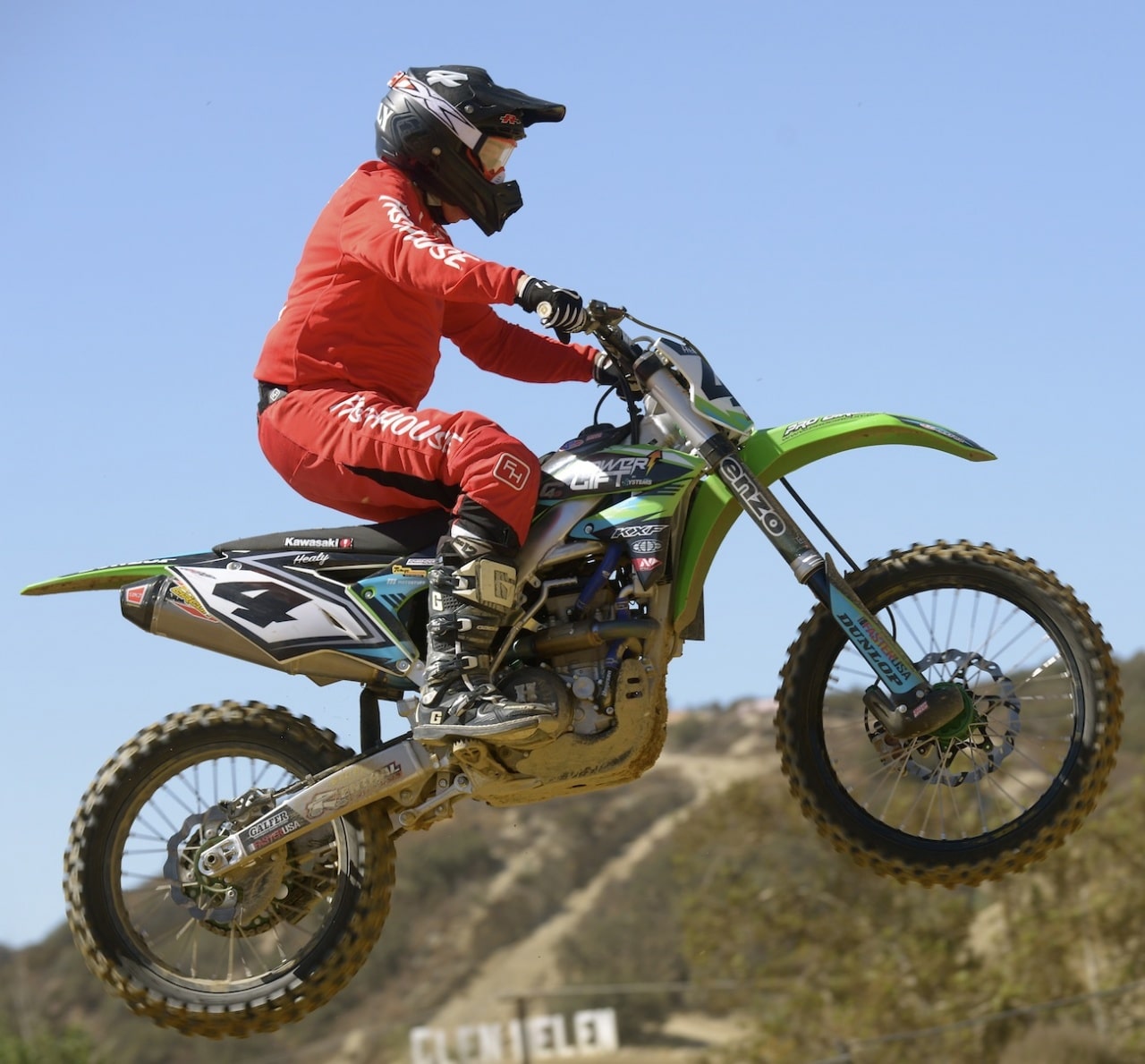 Rob Healy has not been to Glen Helen since he got mad when they moved him up a class about six years ago at the World Vet Championship. Now he’s six years older and in a different class, so he came back. Photo: Josh Fout An “Un-Race” is the perfect place for a District 37 desert racer to try his hand at motocross–without all that rushing around. Photo: Dan Alamangos