It what has to be one of the strangest REM Motocross races in history, 20 percent of the riders were from foreign countries. And not just the normal Swedes and Aussies that are always at REM. This week there were racers at REM from Ireland, Holland, Australia, Sweden, Great Britain, South Africa, Switzerland, Norway, Japan, Hungary, Uruguay, Tahiti, Argentina and Mongolia. There were even two Hawaiians in the house. There were foreign riders in the 450 Pros, 250 Pros, Vet Pros, 250 Intermediates, 125 Intermediates, 125 Beginners, Vet Novices, Vet Intermediates, Open Vets, Womens, Over-40 Experts, Over-50 Experts, Over-60 Experts and Over-50 Intermediates. This is Robbie Wageman. See the riders below him? If everything goes right, Robbie will be down there in a few seconds and up and over the hill to the left. And everything went right for Robbie in the 250 Pro class. Colton Aeck came back to REM now that the Supercross series has moved from the Paciic Coast. Colton was second in the first 450 Pro moto, but got a flat front tire in moto two.

But Americans won the premier classes with Dylan Schmoke taking care of business in the 450 Pro class (in front of Swiss rider Keoma Germond, Mongolian MXDN rider Khaliunbold Erdenbileg, Colton Aeck and Jordan Reynolds). Robbie Wageman swept both motos of the 250 Pro class with two Japanese riders, three Norwegians and a Swede behind him. On the plus side of the ledger, the foreign riders did win the Vet Pro class with Hungarian Imre Adamek, 250 Intermediates with Uruguayan Francisco Urretia, 125 Intermediates with Norwegian Vegard Falmaar and got a close second in the Over-60 Experts when Carl-Erik Ovgaard finished behind Lyle Sweeter. Dennis Stapleton (98) used the Vet Pro class to test suspension settings on MXA’s KTM 450SXF Factory Edition IV. He does look a little crossed up in this photo, but don’t worry, he didn’t crash. How do we know? There aren’t any parts to fix a broken Factory Edition in the country yet. He’s under strict orders to keep it in one piece. Hawaiian Brian Medeiros (18) went 8-9 in the 250 Pros. Note that he color-cordinated his gear to the dust.

Nobody on the East Coast wants to hear about the weather, but it was noteworthy because it was so hot. Not the normal freezing 70-degree February weather that Californians complain about during the winter, but instead bright sunshine and temperatures in the high 80s greeted the REM throng. Some foreign riders, fresh out of winter climes where snowshoes are worn more than motocross boots, wilted in the SoCal heat. Taiki Koga (01) got second the 250 Pros, but, in the process, he end up crashing with fellow countryman Yusuke Watanabe. They both remounted to finish second and third. Eilish Conlon (21) was another foreign rider at REM.  She was second in the 125 Two-Stroke Beginner class. Khaliunbold Erdenebileg, you can read it yourself on his jersey, was third in the 450 Pro class and first Mongolian. Erdenenbileg has raced the Motocross des Nations several times for his country. Swede Aleksander Klock (872) tries to stay low in a big banked corner, but his bike wants to go up. Klock was fifth in the 250 Pro class.

Not all of the foreign riders fully understood the low-key American style of racing and one Dutch rider (who will go unnamed), went over to the AMA National track (it was open for practice) and rode with all the local riders out spinning practice laps. He thought that was the REM track. When it came time for his race, he reported to the AMA National track starting line, but no one was there. A helpful local practice rider told him that he was on the wrong track…that the REM race track was on the hill above the National track. He made it to the starting line before the gate dropped for his race, but he didn’t know where the track went. AMA Hall of Famer,  former GP, Inter-Am and AMA National rider Lars Larsson has switched bikes virtually every week in 2015. Luckily, Jody will give Lars whatever bike he wants (he even gave Lars his own bike two weeks ago). This week Lars wanted to ride a Kawasaki KX250F. We don’t have a clue where these two spectators were from, but we can promise that it isn’t the United States. Fashion takes some strange turns around the globe. 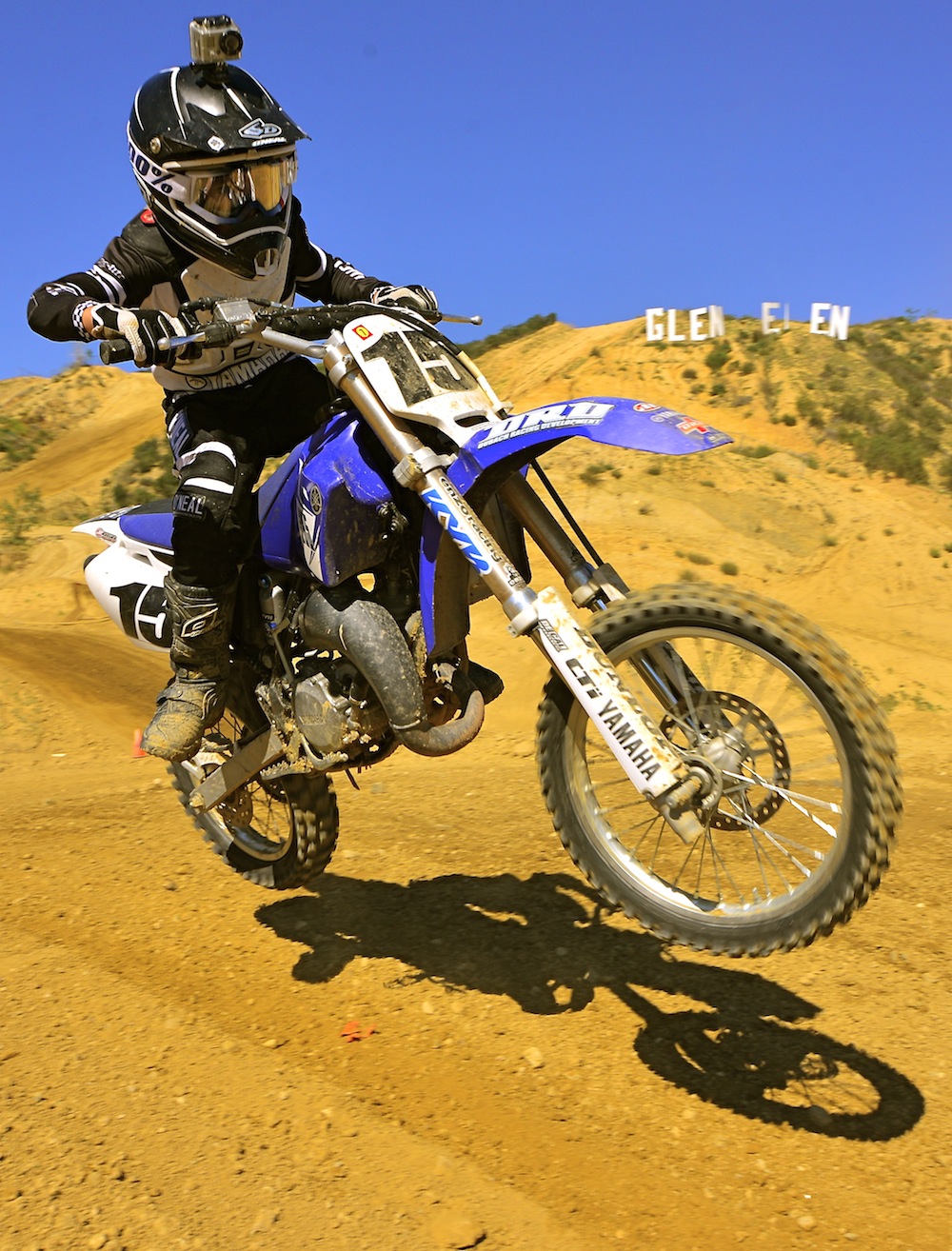 Carter Dubach (15) is just beginning to make the move to 85cc bikes after his time on Pee-Wees and 65s. He looked good on the Yz85. 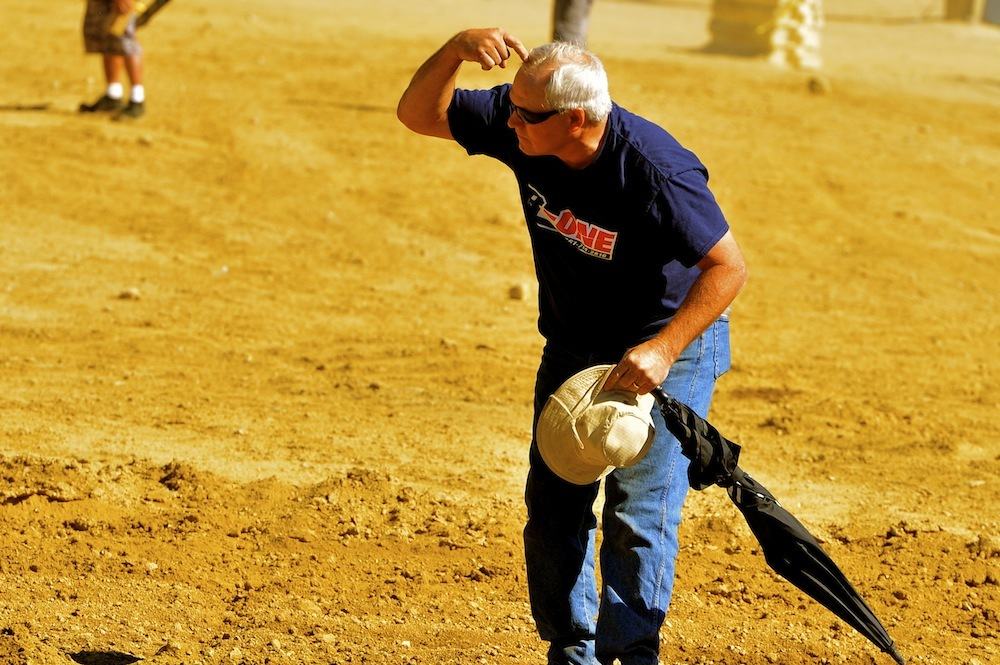 Russ Wageman is signaling to son Robbie about the dangers of skin cancer on a hot day — which explains the safari hat and umbrella. Once they moved the super-fast former AMA Pros out of the Over-50 class and into the Over-50 Elite class, the battle for dominance in the Experts heated up. At the moment, Phil Dowell (23) is the king of the class, but first he has to get by Dave Eropkin and Luther French. Glen Helen has some big hills, but it also has lots of rolling terrain that rises and falls. Here the Over-50 Experts, led by Dave Eropkin play roller coaster.

The biggest classes of the day, in size place, were the the Over-50 Intermediates, Over-50 Experts, Over-50 Novices and Over-60 Experts. But the 250 Pros were the fifth largest class 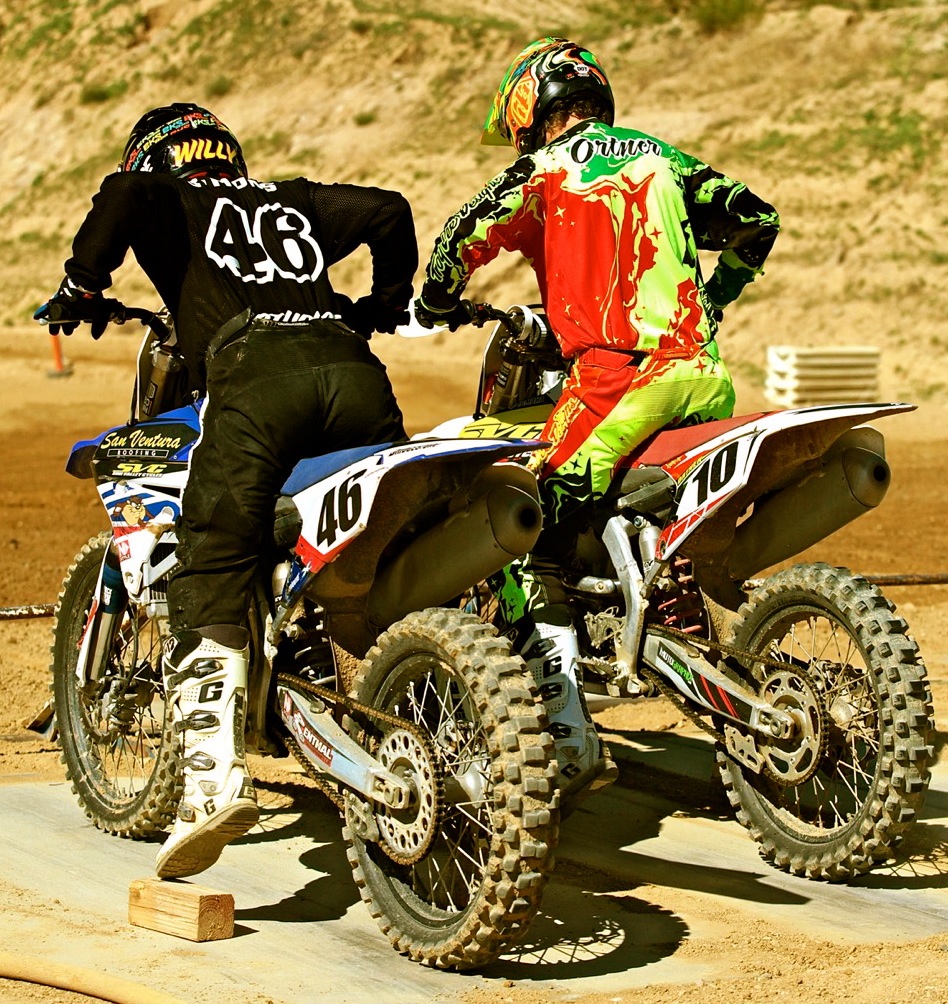 Willy Simons (46) and Jon Ortner (10) prepare to launch off REM’s concrete starting pad. This is skill that you have to master to race at Glen Helen (because both the REM and AMA National track have concrete starts).

Next Saturday, REM will race on Glen Helen’s AMA National track — and we know a Dutch rider who would be very happy to hear that, but he’s flying home on Monday. For more info go to www.remsatmx.com

10 THINGS YOU NEED TO KNOW ABOUT THE DALLAS SUPERCROSS