REM RACE REPORT: THE WARM-UP RACE FOR THE 2020 OCTOBERCROSS NEXT SATURDAY ON THE NATIONAL TRACK Glen Helen’s REM motocross races are special, and that doesn’t mean giant races with 26 motos and kids on pit bikes racing around all day long. Special, in the REM sense, means lots of motorcycle industry people who want to race a true-to-life motocross track, not some jump fest abomination built on flat ground. It  is special in that it is the last bastion of what motocross was like back in the day, and it is the last place where you can find the big names of Saddleback, Indian Dunes and Carlsbad. It is runs with such efficiency that the riders get long moto and still get out of the track by 2:00 pm. Braden O’Neal borrowed Kent Reed’s KTM 450SXF Factory Edition to race the Pro class. Kent had surgery on his hand (not motocross related) and as he was recovering his doctors found that he needed surgery on his neck. He decided to let Braden ride his bike, since he couldn’t.

It’s not for everyone, because almost every other track in SoCal is for those people, but this is the one favored by execs from gear companies, tire companies, motorcycle manufacturers and industry insiders. Ralf Schmidt is the U.S. TM distributor and sponsors lots of riders, but he may well be the most dedicated of all his rider. He showed up at REM with TM 500c two-stroke. He said it scared him.

The race schedules at Glen Helen been thrown all cattywampus by the coronavirus pandemic. All the races that were canceled in April, May, June, July and August now want to get on the October, November and December schedules. Glen Helen’s Lori Watson has been doing her best to help as many race organizations and clubs as possible, but that often means as many as 5 races on the weekends, and more than a handful on weekdays—and the schedule tightened up every time there is a big event on the schedule that needed the park for two or three days—like the Oct. 16-18 Lucas Oil Off-Road Truck Championship, Oct. 23, 24, 29 and 30th AMA Endurocross Championship (on the Stadiumcross track),  Oct. 30-Nov. 1 NPGC Prospectors GP, Nov. 6-8 Dubya World Vet Championship, Nov. 21-22 Twenty-four Hours of Glen Helen, Nov. 27-29 Day in the Dirt, Dec. 9 Fire & Police Christmas GP and Dec. 12 Jump Champs event. Kurt Nicoll just got through prepping for the World Two-Stroke race last week and has now switched over to his four-stroke to get ready for the 2020 World Vet Championship on November 6-7. Kurt won the Vet Pro class and ran in the top three of the Pro class at REM.

Lost in the big events and looking for a place to race are all of Glen Helen’s weekly races like ARX Vintage, Cal VMX, Swap Moto, SRA GP, Old School Scrambles, SoCal Old Timers, QBC Quad/UTV series and, of course, REM, who has been racing at Glen Helen for 30 years. REM got bumped from all of its September dates, but has five remaining races on its 2020 race schedule. The big news is that the yearly Octobercross, a continuation of the old REM “Commotion-by-the-Ocean” event from Carlsbad Raceway, will be held on October 17. Here are the five remaining races on the 2020 schedule, starting on October 17 and finishing on December 19. For more info go to www.remsatmx.com Will Harper was third in the Over-60 Experts. Harper was a 1970’s Indian Dunes hero.

What follows is a compendium of race action from Saturday’s REM race. Enjoy. Better yet, partake. Jon Ortner (1) floats out of the up-down-up-down rollercoaster section on his way to second in the Over-50 Elite class. Dirt Bike Magazine editor Ron Lawson (31) is chased by Mark Barnes (5) on their way to fifth and sixth in the Over-60 Experts. Lars Larsson (58) a true-to-life motocross star from the 1970s. He came to America in 1967 to demonstrate Husqvarna motorcycles to American teenagers for Edison Dye. He’s still here and he’s still racing at 78 years old. Jody Weisel (55) has achieved most of his motorcycle dreams since starting in 1968, but he is still driven by a desire to beat his long-time friend Lars Larsson every week and Lars says he’ll never quit racing until Jody does. Photo: Dan Alamangos Marc Crosby was the REM Number One rider in 2005, but that was 15 years ago. Marc found out, what a lot of riders before him found out, those “old slow guys” in the Over-60 Expert class are all former Pros. Nick Reisinger (right) won the 125 Beginner class. Robert Reisinger (left) was winning the Over-60 Expert class when he came up on a pack of lappers in the last corner before the checkered flag. He elected to go around them, but they moved over, he crossed over behind them to go the 20-feet to the flag, but they swerved right. While Robert was dodging lappers his 1-1 became a 1-2 and Doug Frankos took the win. Mitch Evans won the first moto of the Over-65 Intermediates, but ended up 5th in moto two to lose the overall. Tom Hinz (34) hasn’t raced in a couple years, but he decided to give it a try since the temperatures were in the 80s instead of the 100s. He went 5-3 for fourth in the Over-40 Novice class. Photo: Dan Alamangos Film maker Mark Homan (The Art Of Moto — 2013) and Bill Seifert (37) are part of an extremely large contingent of racers over the age of 60 at REM. The “Greg Groom Creative Line Award” goes to the rider who most blatantly cuts the track at a race. This week it was awarded to, you guessed it, Greg Groom, after he knock down a cone and straightened out the finish line chicane. Photo: Dan Alamangos Randel Fout (934) has been out of action with a broken pelvis and wrist that was complicated by having to have the wrist rebroken and surgically realigned. He’s glad to be back on the track. The next REM race will be the 18th Annual Octobercross on the Glen Helen National track next Saturday, October 17. For more info go to www.remsatmx.com or Click Here for REM’s Facebook page. 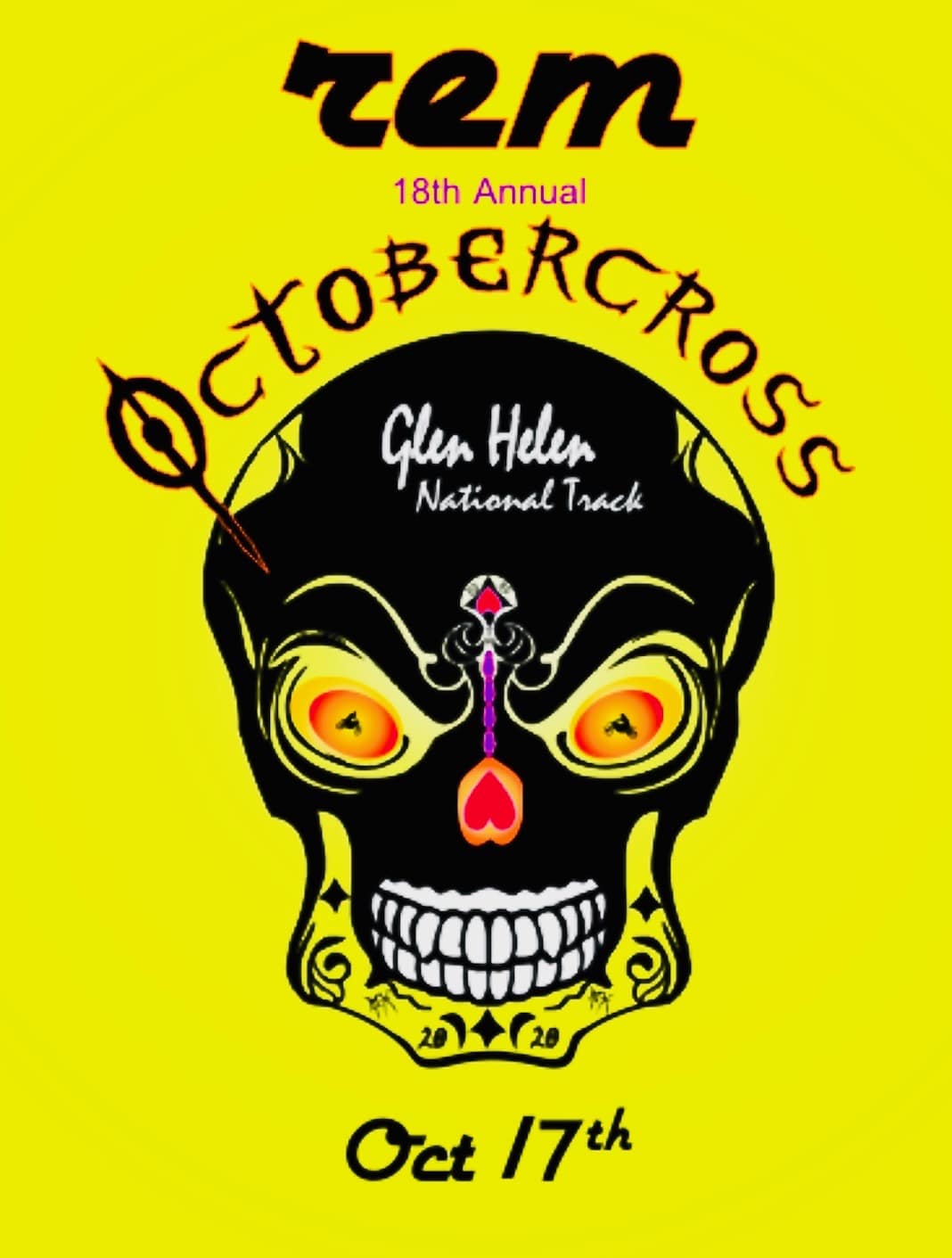 THE BEST OF JODY’S BOX: “SOMEBODY HAS TO BE IN RACE SEVEN—THIS WEEK IT’S YOU”