Kai Mukai (52) drives through a debris field in pursuit of Justin Jones (3) in the 450 Pro class. Jones would crash out while leading.

Motocross racers from around the world take the World Vet Championship serious. The first, oldest and original Veteran Motocross Championship is over 30-years-old and draws a large crowd of motocross racer from 20 different countries. 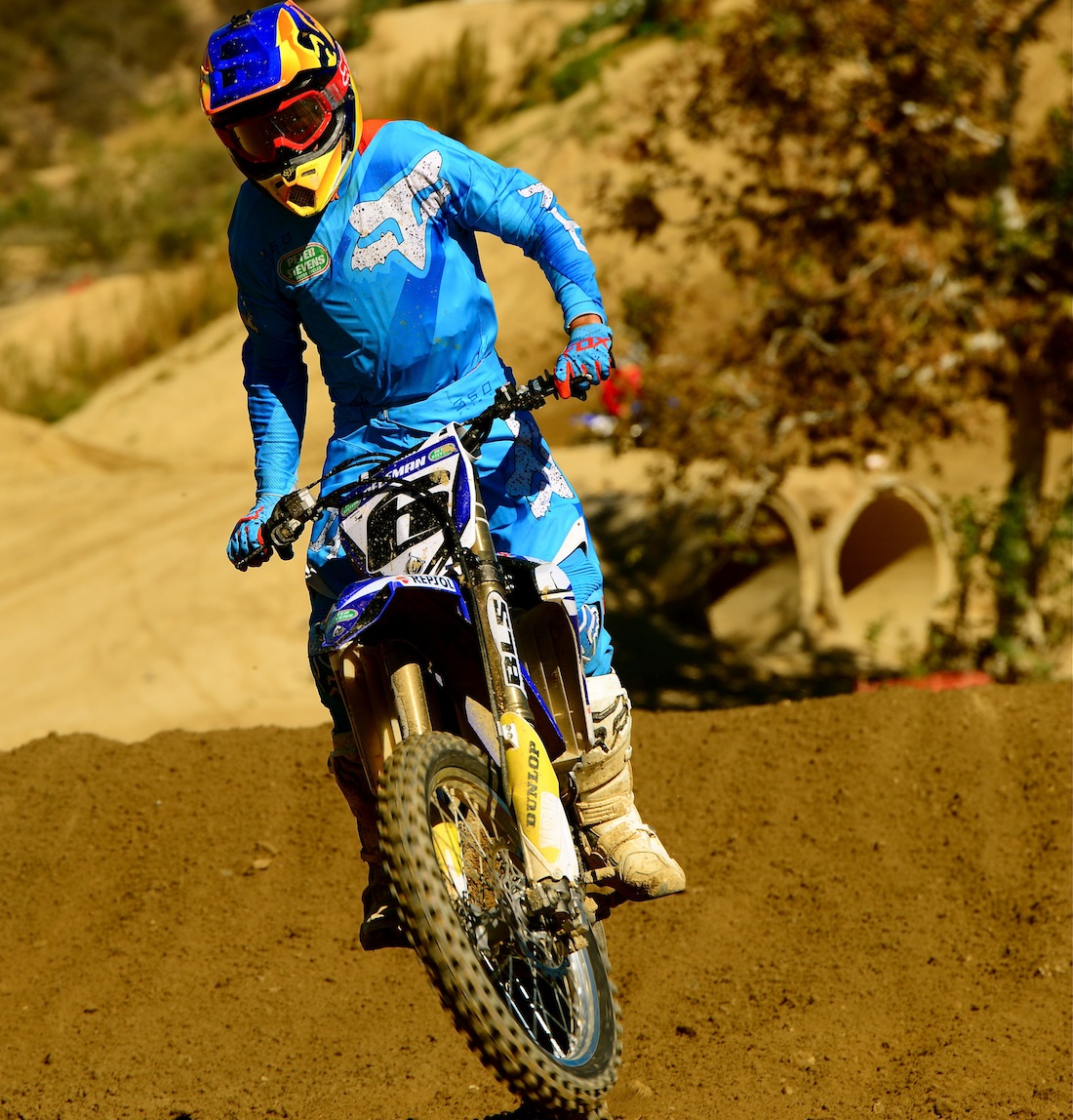 Australian Mike Reefman (6) went 1-1 in the Over-40 Intermediate class.

But the World Vet Championship is still a week away — so why did rider from England, Ireland, Brazil, Holland, South Africa, Australia, Mexico, Canada, Germany, Spain, Sweden, Denmark and other countries fly to Southern California a week early? They came to race the REM Octobercross. Originally called the “Commotion-by-the-Ocean” when it was held at Carlsbad Raceway, it has become a destination race because it allows racers the opportunity to race on a newly designed Glen Helen raceway track. This week’s “Greg Groom Creative Line Award” goes to Daniel Barrett (71), who must have a fear of heights because when every other rider went up on to the high banks of Talladega, he took a shortcut inside the track markers. Cheating is not good for the soul. Photo: Richard Stuelke

What’s the big deal about Glen Helen? Glen Helen is a very unique motocross track, and for most of the visiting riders, whether from Europe or different states, its huge hills and decomposed granite surface are as foreign as their passports. Thus, they show up a week early to ride a large portion of next week’s race track to attempt to decipher the suspension setup required for fast downhills and big bumps. Spanish rider Joaquim Sunol (52) raced two classes at the REM Octobercross. He was 4th in the over-50 Intermediate class with a 4-4 and fourth in the Over-40 Novice class with a 6-3. Here, he is surrounded by Brazilian Roberto Kreischel (25), Chris Hansen (362), Brian Shannon (93) and 3rd place finisher Jason Ingersoll (24) in the Over-40 class.

As Over-40 Pro winner Drey Dircks said,”We don’t race on this type of dirt very often in Ohio, so I came early to get in a little practice. I’m more used to soft dirt and mud—this dirt requires concentration.” Swedish GP star and AMA Hall of Famer Lars Larsson (56) has won three World Vet Championships, but his main focus at REM was catching arch-rival Jody Weisel (192) in the Over-60 class.

But the REM Octobercross motocross wasn’t limited to Over-30, Over-40, Over-50 and Over-60 riders. It has all of the regular youth classes and the competition is fierce. For those riders who could not come a week early, Glen Helen will be open for practice on Thursday, November 5, for all classes and on Friday, November 6, for rider who are entered in the World Vet—which starts on Saturday and ends on Sunday, November 8. You can tell that all the crashing under the Glen Helen bridge isn’t over yet.

REM does not race on World Vet weekend, but returns on November 14 for their regular schedule on the REM track at Glen Helen. For more info go to www.remsatmx.com 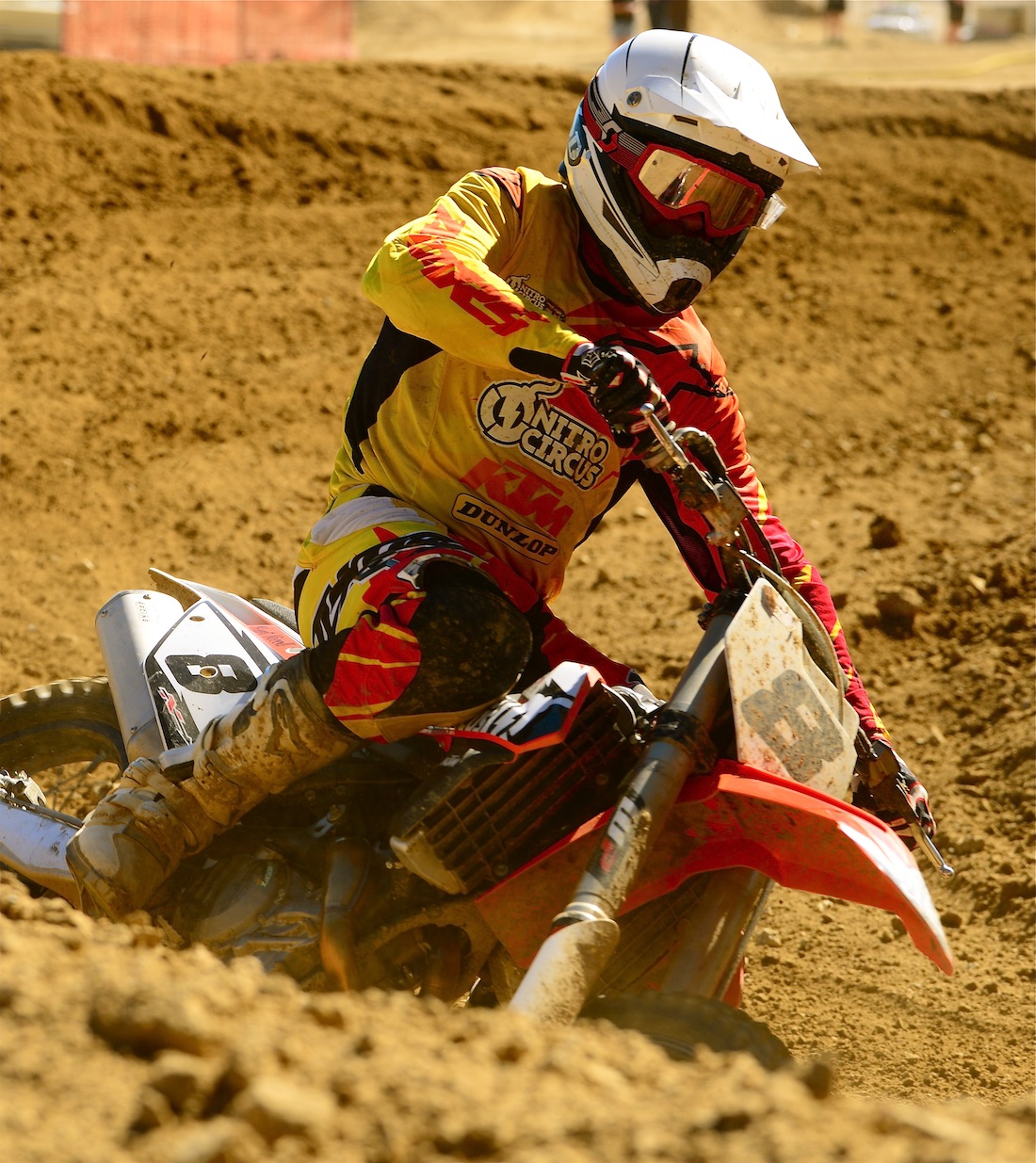 Four-time 500 Grand Prix runner-up Kurt Nicoll’s 3-1 wasn’t good enough to beat Drey Dircks 1-2 in the Over-40 Pro class. Shawn Wynne was 3rd with a 2-4, while Swede Roger Svensson was 4th in front of Terry Cook and Gordon Ward. Former AMA National Pro Drey Dircks flew in from Ohio, where he works for Honda, to race the Over-40 Pro class and Over-50 Experts. Drey won the Over-40 class, but got beat by Kevin Foley in the Over-50 class. Dutch rider Ralf Schmidt (73) went 2-2 in the Over-40 Intermediate class on his TM two-stroke. If you’ve ever doubted how tough the older classes are at Glen Helen, look no further than Mark Hall (66). Mark won the Open Vet class (for riders over 30), but finished 11th in the Over-50 Experts. Richard Taylor (44), son of former AMA Pro and EKS Brand goggle entrepeneur Rich Taylor, reels off a perfect boat wake on his way to second in the 250 Intermediate class. David Bress (320) and German Holger Dettman (41) squabble over 8th in the Over-40 Intermediate class. Dettman got th spot with a 7-9. Photo: Richard Stuelke