John Griffin (7) bumps Bryan Friday (43) out of his way. Friday ended up third in the Over-50 Experts, Griffin first.  Photo: Debbi Tamietti Although motocross’s upper strata is made up the stars of the factory teams, they are far removed from the real world of people who buy bikes, pay retail for parts and dole out cash to race. The local racers, whether six of sixty, are what keep the sport alive. Lose the massive grassroots level of amateur riders and the rest of the sport will wilt and fade. The Big manufacturers are supporting the Pro level of the sport—and they are doing it off bike sales to regular folks, the proverbial weekend warriors. No bike sales, no Eli Tomac. No bike sales—the number of tracks will shrink. No bike sales, no tracks—and the sport will go the way elevator operators. So, what the sport needs, more than another factory star is a couple thousand 250 Novices. This is a very steep hill with a left-hand hairpin turn at the top—with a  rut on the inside. Karl Grove (181) thought it had the inside line, but Josh Fout proved him wrong from the outside  Photo: Debbi Tamietti

It takes local races to feed the gristmill that is the AMA Supercross and National circuits. So, the next time you go to your local track, wherever it may be, and no one shows up to race—be afraid, be very afraid. The sport depends on you, well, actually people like you; people who want to compete on their motorcycles—they make sure that Eli’s and Kenny’s new babies have shoes.

Racers always like it when the race promoter races. They feel that it makes him understand where the track is good and where it needs work. REM promoter Frank Thomason races.  Photo: Debbi Tamietti

One of the best local races is Glen Helen Raceways weekly REM races. They run like a well-oiled machine, move fast, provide long motos, have lots of flaggers, an EMT-staffed ambulance, lot of industry types stretching their motocross muscles and a loyal following of racers who like each other. REM is the most folowed local race in the world–people in Sweden, England, Spain, Germany and Japan know the name and they even know the riders. If you are a TM two-stroke rider, like J.Y. Leavitt (47), it’s nice to get to race against the American importer—Ralf Schmidt (73). Leavitt won the 250 Pro class and Ralf won the Over-40 Experts.  Photo: Debbi Tamietti Randy Skinner (192) signed up for the Marc Crosby (15) riding school. It had a lot of personal attention, including Marc riding around in front of Randy and pointing where the track went. Photo: Debbi Tamietti

Each week the local SoCal racers gather on a hill, just above the Glen Helen National track, on a hilly patch of land that REM promoter Frank Thomason rehabilitated from the forgotten shell that once was the 1970s Arroyo Cycle Park. And they do what motocross riders have done since 1969—they have fun. Here are this week’s sights, sounds and people who make it possible for factory teams to exist. We don’t expect a thank you card from Eli, because we know he knows who pays his salary.

You are going to be shocked to hear this, but REM doesn’t have 85cc, 65c or 50cc classes. That is not a problem in SoCal, there are plenty of races where they have 14 minicycle classes in a day—and sometimes into the night. REM would rather let these racers go where they can be best served and run longer races for riders who appreciate and serious motocross track, not ten acres of flat land with 22 jumps on it. The biggest class on a weekly basis is the Over-50 Experts (and its companion Over-50 Elite class). The Over-50 Elite class was originally set-up for former AMA National Pros, so that they could break away and run with each other, without interfering with the normal Over-50 riders. It has grown over the years as Over-40 Experts hit the big Five-Oh and ended up getting promoted to the Elites and, of course, it gets new recruits from any foolhardy Over-50 Expert who mixes it up with the Elites at the front fothe Over-50 Exprt race. The penalty for winning too many Over-50 Expert races is that you will never face easy competition ever again. The good thing is that you can win the Over-50 Elite class as many times as you like because there is no class to move up to. 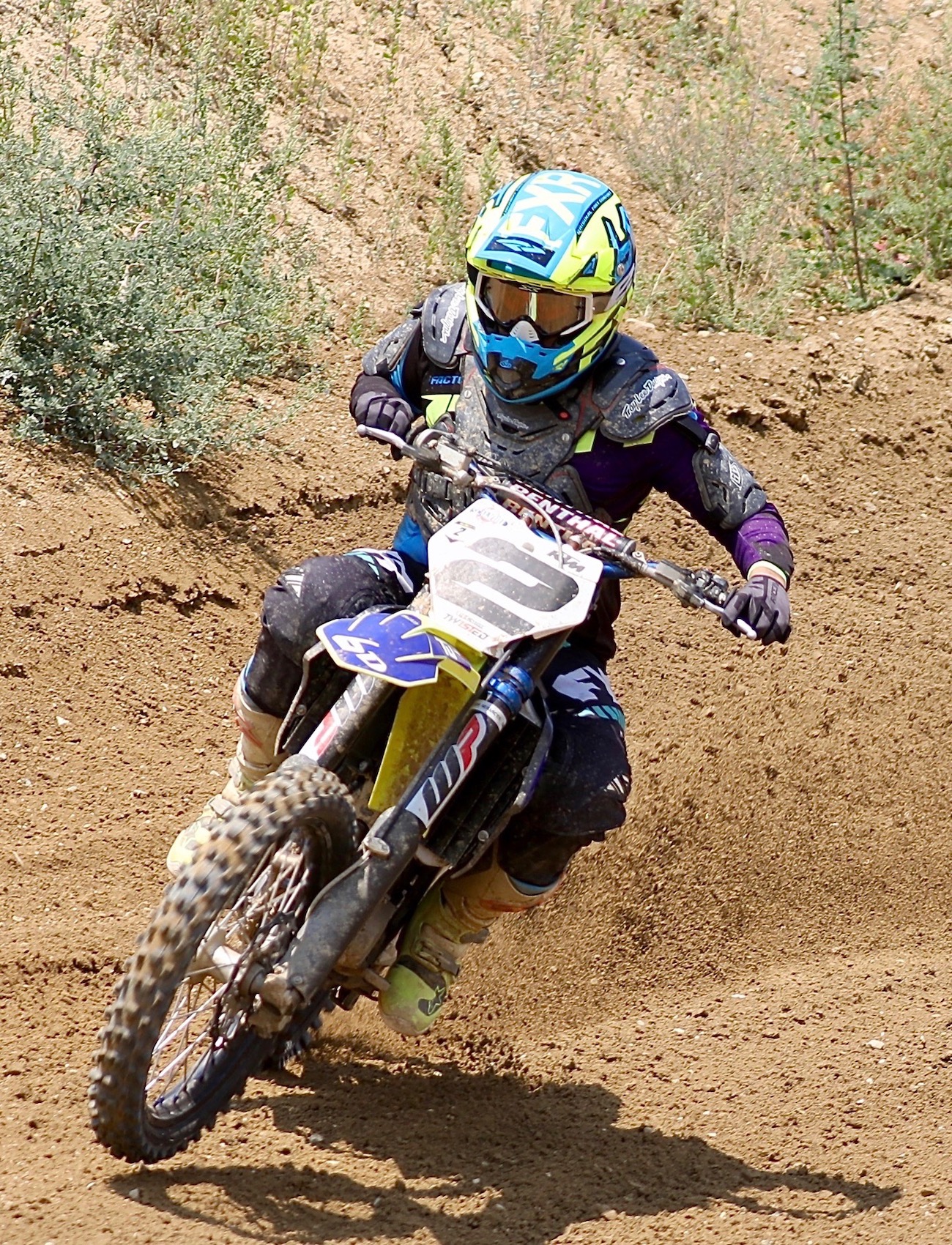 Luther French (2) is unbeatable in the Over-50 Elite class as of late. Photo: Debbi Tamietti Joe Sutter (111) was fifth in the Over-50 Experts last week. This week he was fourth. He is on schedule to win in exactly one month.  Photo: Debbi Tamietti

In the Over-50 Intermediates it was Mike Davis ahead of Morgan Pierce, Mike Young, Bill Reimer, Mike Phillips, Pete Vetrano and Carmen Cafro. Phil Dowell (23) leads Ron Shuler (33) in the Over-50 Elite race. Shuler was fourth and Dowell was seventh by day’s end. Photo: Debbi Tamietti

The Over-60 Expert class is always a surprise to everyone who comes to REM for the first time. It is always the largest or second largest class at REM. This week it was second largest. If you are Over-60 and still race, you should be racing at REM because you won’t be racing against three or four other guys, you’ll be behind a full gate. There are plenty of people to race with at REM. There is not an Over-60 Elite class, so as new young 60-years-olds filter into the Over-60 Experts, where they are met by the most experienced racers on the planet. The Over-60 class is in constant flux. Dirt Bike’s Ron Lawson (35) just keeps getting holeshots in the Over-60 Expert class. One of these weekends he will turn it into a win. Photo: Debbi Tamietti

They added an Over-65 class two years ago to allow the “older of the old” to escape the new kids, and as faster Over-50s got older, they pushed faster Over-65 riders into the Over-65 Experts, who led to a growth spurt in the Over-65 Intermediates, which had been the safe domain of Over-70 riders. It’s not easy getting older in motocross—everybody is getting faster. Jody Weisel (192) got roosted so bad on last week’s start that he wore a chest protector under his jersey this week. Unfortunately, the track was redesigned with a much shorter roost-free start and with the 102-degree weather it was hot when the breeze was blocked. Photo: Debbi Tamietti Val Tamietti (31) is another of REM’s many YZ250 two-stroke riders. Photo: Debbi Tamietti Dave Eropkin (811) looks like he has a great start, but didn’t you see the roost hitting Eropkin’s front wheel. That means he’s not at the front. Debbi Tamietti Chris Radzinski (104) went 12-11 in the Over-50 Experts—all because of bad starts. Photo: Debbi Tamietti As of late the 450 Pro class has found themselves in a do-or-die battled to beat 54-year-old Kurt Nicoll. The former Grand Prix racer, KTM team manager, MXDN winner and Champion Motocross School owner, never stopped racing. And it shows as he skips out on racing the Over-50 Elite class to race against the Pros (albeit signed up in the Vet Pro class). Last week Kurt beat all the Pros, this week they came loaded for bear. Brian Medeiros ran away with the first moto win, once he ran down and passed Braden O’Neal and Max Groom. Brian was safe from Kurt, put the other Pros felt his wath as he came back for a first moto crash to mix it up with them. This is how hard Hawaiian Brian Medeiros (934) had to ride to win the 450 Pro class. He fell down on the last lap, but had a big enough lead to keep the win.  Photo: Debbi Tamietti

In the second moto Brian Medeiros battled back and forth with Max Groom, but at the halfway point in the moto, Medeiros opened up a gap that should have insured victroy. And it would have, but on the last lap, Brian dropped his bike in a tight, deeply rutted corer at the top of a hill. That was all the opening that Kurt Nicoll needed to take the overall victory. If Kurt Nicoll is this close behind you, he will be going by in the next turn or two—which he proved to second place 450 Pro Braden O’Neal right after this photo was shot. Photo: Debbi Tamietti Braden O’Neal may not have held Kurt Nicoll off, but he got to lead half of the first 450 Pro moto—and if you can lead half way, you can lead the whole way. Photo: Debbi Tamietti Taylor Sims used a 2-1 to take the 450 Novice win over the 1-2 of Nolan Broaddus. Meanwhile the battle for third raged between Ryan Ogan and Chris Hyden, both of whom have won the 450 Novices this year. In the count-back Ogan’s 4-3 beat Hyden’s 3-4 for third. Other Novice winners included Mark Taylor (Vet Novice), Lamont Dusseau (Over-40 Novice, James Calle (250 Novice), Stephen Bishop (125 Novice), Deegan Young (250 Beginner), Noah Holwick (125 Beginner) and Kenneth Wenham (Vet Beginner). Taylor Sims (168) won the 450 Novice class and, as you can see, he used all of the track and a little more. Photo: Debbi Tamietti Yes, that is a beard sticking out from under Charles Stevenson’s helmet. The Over-65 Novice winner is about to be swamped by the faster Gene Boere (62) and Lars Larsson (58). Photo: Debbi Tamietti At every REM race Motophoto presents a framed photo to a lucky rider. That is Tony Parsons holding his photo, while Lars Larsson makes fun of it. Photo: Debbi Tamietti Bob Rutten (83) was a top five Over-60 Expert until he turned 65. Now he’s the winning Over-65 Expert. Photo: Debbi Tamietti WHILE THE CAT’S AWAY THE KIDS WILL PLAY REM doesn’t have 50cc, 65cc or 85cc classes, but they conveniently have a Pee-Wee track right next to the REM starting line for the kids of the racers to play on. Logan Fout (8) learned to ride there. Photo: Dan Alamangos Motocrosser have to start somewhere. Dad gives his daughter a helping hand between his REM motos. Photo: Dan Alamangos The next REM race will not be until September 21 For more info go to www.remsatmx.com or Click Here for REM’s Facebook page.