“SATURDAY AT THE GLEN” RACE REPORT: YOU’LL BE BLOWN AWAY BY THE ACTION Most people in SoCal ignore the TV weather reports because they are wildly inaccurate, but when they predicted gusty winds blowing at 40 to 50 mph they were correct. This was what the winds looked liked at Glen Helen’s front gate. The flags are standing straight out, one has ripped off its pole and the palm fronds are bent horizontally. But, the track was in great condition and the racers showed up anyway. Photo: Debbi Tamietti

In the days leading up to this weekend’s “Saturday at the Glen” motocross the phone lines and text messages were on fire. “Is Glen Helen going to cancel Saturday’s race?” “Are you going?” “It seems crazy to race in 40 mph winds, doesn’t it?” “What if we get there and it is too windy to race?” The concern was real, but in the end it was misplaced. When the riders began pulling into the track at 7:00 a.m. on Saturday, Glen Helen looked deserted. The GBC Quad/SxS/Trophy Kart race had been canceled on Thursday. The National track, that was open for practice was empty. The “Saturday at the Glen” pits up on the hill had trucks and vans in orderly rows, but no one was getting out of the warmth and comfort inside the cabs. Sean Lipanovich gets the holeshot in the first race of the day as the wind blows the dust up and over the banked first turn. Photo: Debbi Tamietti

As predicted the wind was a steady 27 mph and the gust were 39 mph. It seemed grim, but racers kept coming and inside the two-story sign-up booth, everything was a go. Glen Helen’s Lori Wilson assured every stray rider that the race was going to be held. She said that once the sun got higher up and the temperature gradiant between the colder high desert air above Glen Helen and the warmer flat land air below it equaled out, the wind would calm down. Sean Lipanovich (505) is coming off of a memorable end to the 2022 season. He is the winningest 450 Pro in Glen Helen’s weekly wars, raced the Red Bud Motocross des Nations for Team Guam, won the Over-30 Pro class at the World Vet Championships and went 1-1 this weekend at “Saturday at the Glen.” Photo: Debbi Tamietti

To help the riders adjust, Lori held a long Open practice session so the riders could go out and see for themselves that the track was in good shape and the wind was not a big issue. But, just in case, she took Mt. Whitney, the biggest hill on the “Saturday” track, out of the layout (because at its peak, the winds blow really hard). The first 40 riders on the track came back from open practice and told their friends, still huddled in their trucks, that the wind wasn’t a problem and that the track was really well prepped. Preston Tilford (17) went 2-2 for second overall in the 450 Pros. Jumping the big tabletop was a cinch with a 40 mph tailwind. Photo: Debbi Tamietti

With that, the regular practice schedule was held and everyone was ready to race. The first race of the day was the 450 Pros and Intermediates—it proved that not only was the dirt in great shape, but the track’s biggest jumps could be jumped—largely because they were aimed into a head wind or with the down wind. However, the wind did pick up as the day went on and by the second round of motos the gusts were getting closer to 50 mph, but by this time the riders had made accommodations for the one or two spots where the wind would move the bikes around‚ even when the wheels were on the ground. Glen Helen went the extra mile for the racers who showed up. They could have canceled “Saturday at the Glen” back on Thursday, when the quad and side-by-side race was canceled, but they didn’t. And they never wavered from Saturday morning’s stance that they were going to hold the race no matter what—even if it meant that they would almost certainly lose money. In the end, Lori’s determination to hold the race swayed the racers to stick it out and, lo and behold, more and more racers came up the pit road to swell the ranks to an acceptable number of racers. Yes, it was less than the turnout she would have gotten if the wind hadn’t blown. But every rider who came to race on Saturday got to race. Thanks Glen Helen! Sterling Cogar (45) and Mitchell Mohler (118), although the results had him listed as Mitchell Miller, battled over third place in the 450 Intermediates. The prize went to Sterling over Mitchell. Photo: Debbi Tamietti MXA shows up no matter what the weather and this week was no different, although it was a little different because the test riders came to race the 2023 KTM, GasGas and Yamaha 125s (the Husqvarna was on the dyno). Randel Fout (shown above), Marc Crosby, Josh Fout and Ernie Becker swapped bikes between motos. This is the fuel-injected, electric start, electronic power-valved 2023 KTM 125SX. Photo: Debbi Tamietti Marc Crosby, who isn’t a 125 specialist, raced the KTM 125SX in the first moto and the GasGas MC125 in the second moto. Photo: Debbi Tamietti Josh Fout (55) split his time between the KTM and the GasGas 125s as he and Randel raced four motos on the 125s. MXA’s Pro test riders rode them on Thursday and handed them over on Friday for the Vet test riders to race. Photo: Debbi Tamietti Steve Wiseman (219), a desert racer from back in Bob Rutten’s desert days, showed up to race the Over-60 Expert class. Steve brought his son, Shale, out with him. It was Shale’s first-ever motocross race and he finished third in the 250 Novice class. Photo: Debbi Tamietti Ray Poltack (223) and Dave Eropkin (811) ran up front in the Over-60 Expert class, with Eropkin winning both motos.  Photo: Debbi Tamietti Randy Skinner took the Over-60 Intermediate victory with a 2-1 on MXA’s 2023 GasGas MC350. Photo: Debbi Tamietti Scott Hyde (521) was the Over-60 Novice winner. Given that Glen Helen is located at the bottom of a canyon, the Saturday track is positioned perfectly so that the wind either blows down the canyon or up the canyon—and unlike the National track its has no crosswind jumps, which makes it raceable on a windy day. Photo: Debbi Tamietti David Cincotta (861) raced his 1979 Yamaha YZ400 in the Over-50 Expert class. He got to lead for awhile, but the 43-year-old suspension got the better of him late in both motos. Photo: Debbi Tamietti Joe Wilson (45) took the Over-50 Novice class victory. It looks like he got his bike’s numbers off of his mailbox.  Photo: Debbi Tamietti Preston Tilford (491) uses up all of the available travel when jumping into the sand section back in the old Bud’s Creek part of the Glen Helen facility. Photo: Debbi Tamietti 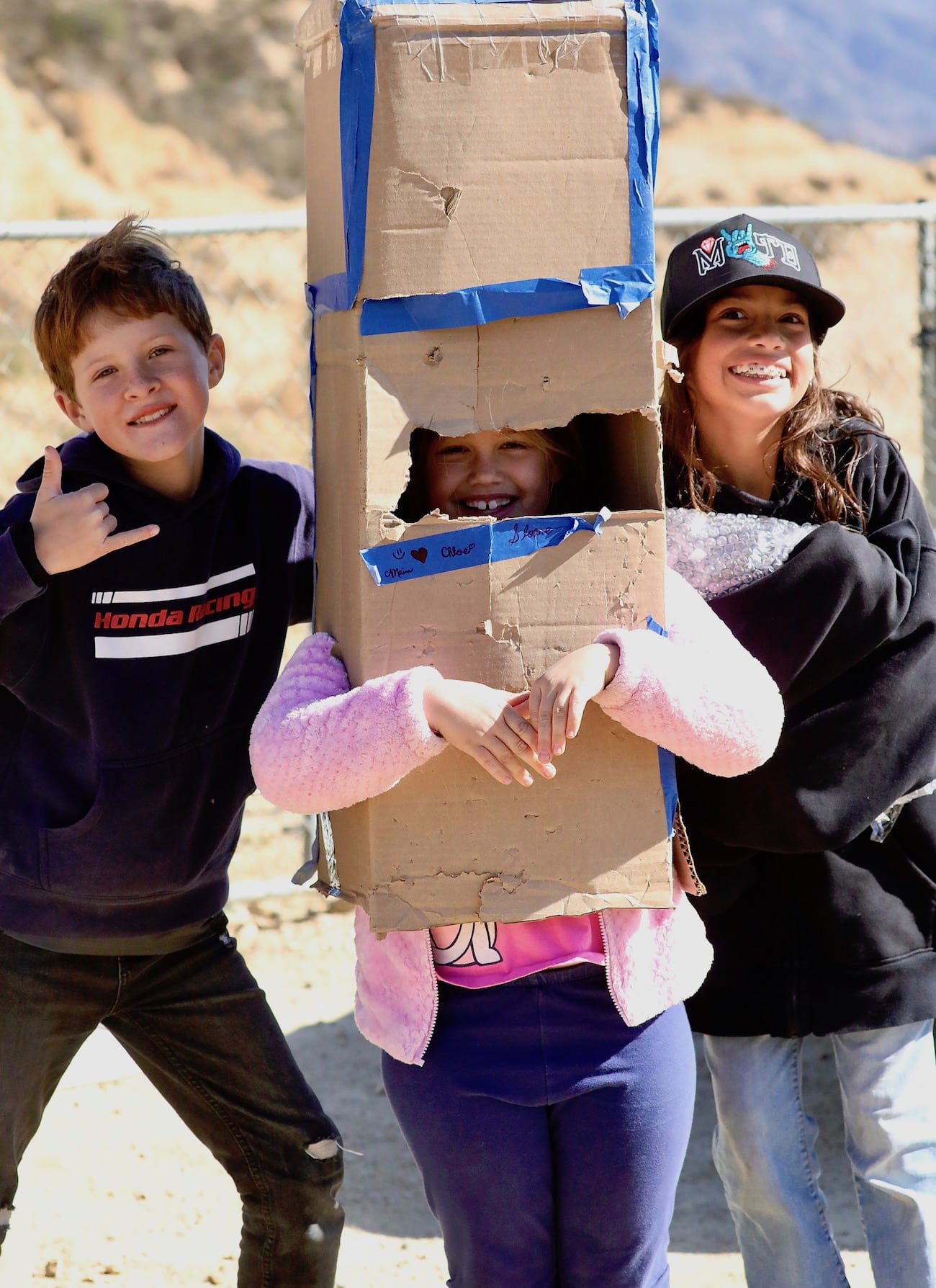 As we get closer to Christmas, parents wonder what to get their kids. These are the children of Randel Fout, Ernie Becker and Pasha Afshar and they spent all day playing with a cardboard box. Photo: Debbi Tamietti Dillon Chipman (556) used a 2-1 to beat out Carson Stevenson for the overall in the 4-to-7 year old Pee-Wee class. Photo: Debbi Tamietti Nixon Galloway (862) was second in the PW50 class. When the wind is blowing 44 mph down the canyon, the speed of a PW50 up the canyon is greatly reduced. Luckily, the Saturday track was shortened for the Pee-Wees to keep them out of the windiest parts of the track. Photo: Debbi Tamietti Lars Larsson (171) and Jody Weisel (71) have been racing since the 1960s and their connection goes back to when Lars helped test bikes for MXA back in the early 1970s. To this day, MXA sponsors Lars as a way of saying thank you to one of the sport’s pioneers. Photo: Debbi Tamietti

Lars Larsson (171) and Jody Weisel (71) don’t want to quit racing. It is all they have known since the 1960s and while they aren’t as fast as they once were, that doesn’t matter to them because they still have each other to race against—just like back in the good old days. Lars was the first European to move to America to race full-time and worked for Edison Dye demonstrating Husqvarna’s in 1967. He also started Torsten Hallman Off-Road Racing with World Champion buddy Torsten Hallman—today you know it as THOR. Jody was one the sport’s first paid independent motocross test riders back in 1971 and has been the editor of Motocross Action for 46 years. Jody edges out Lars at the finish line of their second moto on Saturday, but Jody claims that the win record between the two is overwhelmingly in Lars Larsson’s favor. It is funny that they both choose to wear the same Alpinestars Supervictory leather boots with the steel shin plate. Photo: Debbi Tamietti

“Saturday at the Glen” motocross will not race next weekend because the “Day in the Dirt” will be there, but will return on December 3 and December 10. Pre-entry is only $30 ($25 for minis). Post entry is $40 ($30 for minis) on the day of the race. The Gate fee is $10 (per person). You can sign up for the next “Saturday at the Glen” motocross as late as the Friday before the next race. For more info go to www.glenhelen.com

WANT TO RIDE THE MASSIVE WORLD VET TRACK ONE WEEK EARLY? BE…