Exhaust system testing is simple in to do, but complex to analyze. Boiled down to its basic, the MXA wrecking crew gathered up four test riders of different skill levels and had them race with all of the YZ450F pipes in this test. Next, we rallied them together for an all-day round-robin pipe test that involved riding, changing pipes and filling in test reports. Finally, we took the 2014 Yamaha YZ450F to the dyno to run each pipe through its paces to get cold, hard, statistical facts to go along with the test rider’s opinions.

These are the simple steps. The complex part is trying to make sense of what the riders liked, didn’t like and thought of each exhaust system—and apply their input into a cohesive tests given the variables of speed, skill, dyno data and personal taste.

To get to the gist we apply these ten rules:

(1) We tested the exhaust pipes as they were sent to us and we asked each company to send us the pipe they wanted us to test. Thus, the DR.D, FMF, Pro Circuit and Yoshimura pipes were taken out of the box and tested. We didn’t install any reducers or spark arrestors.

(2) We raced the bike with numerous test riders over the course of two months, but for the final round-robin showdown we used four test riders—a Pro, Vet Pro, Intermediate and Novice. With our aftermarket exhaust pipes we ran the stock zero/zero/zero mapping numbers. We have a better map, which we have included at the end of this story, but we did not use it during the YZ450F pipe shootout because each pipe was built to run with the stock zero/zero/zero map.

(3) Test rider were not allowed to talk to each other about the pipes they had tested until all of the test reports had been filled out. This is important because test riders can be contaminated by the opinions of other test riders. Thus, we got the info before they knew what the other testers thought.

(5) We sounded tested every pipe combo, but since every one easily passed the AMA amateur 94 dB standards we didn’t feel compelled to report the data.

(6) Since we mounted and removed each exhaust system many times, we learned how each system fit together and, more significantly, we learned the importance of anti-seize compound.

(7) We did not request the pipe manufacturers to send us their most expensive units—because whether they are titanium or stainless steel the dimensions and performance are the same regardless of metal choice. The prices vary with material, so we have included the price of all the 2014 YZ450F exhaust systems that each company makes.

(8) There is a caveat to every exhaust pipe test—don’t be too enamored with big dyno numbers. The dyno is just a tool that allows us to gauge the shape of the curve and some comparative figures, but it does not go to the starting line with us. What really counts isn’t who makes the biggest numbers, but rather who has the most usable power, quickest rev, most throttle response and best curve.

(9) During the course of our testing we discovered that different skill level riders sought out different types of powerbands. The favorite pipe of the Pro test riders wasn’t always the first choice of the Novices, while the Intermediates always seemed to seek the middle ground. Thus, you have to have an inner dialogue with yourself about what you really want out of an aftermarket exhaust. The stock Yamaha exhaust system is pretty good. It revs a little slower than the aftermarket pipes. Among the complaints was that it was too barky off the bottom for most test riders’ tastes—evidenced by the fact that the stock pipe makes more horsepower than three of the four aftermarket pipes at 5000 rpm. For us, the easiest way to iron out the abruptness off the bottom was with richer fuel mapping, but since we didn’t remap the bikes in this pipe shootout (because not every YZ450F owner has the GYTR tuning tool or the wherewithal to develop maps), we depended on the aftermarket pipes to solve this problem. The stocker is a do-it-all pipe that could be used by Novices, Vets and Intermediates. And, since it comes on the bike when you buy it, a rider on a budget could live happily ever after with it.

“The stock pipe is very broad and makes the engine easy to ride.”

“It reminds me a little of a KTM powerband—easy to use off the bottom, except for the jerky hit, and then building power as it goes.”

“I thought it worked really well until I raced all the other pipes—they felt like they had five more horsepower because they were snappier, crisper and quicker.”

“I’d race with this pipe because it is metered.”

“Nothing happens too fast. It doesn’t have the personality of the aftermarket pipes, but it’s raceable.” This pipe received universal acclaim. It scored three first-place rankings out of four—and the fourth rider ranked it second. DR.D has a reputation for building awesome Yamaha YZ450F exhaust systems. This might be because DR.D owner Doug Dubach was the Yamaha test rider who developed all the Yamaha’s four-strokes—from the 1998 Yamaha YZ400 on up to the current model.

“This was the best all-around pipe of the five. It did everything right from the bottom through the middle.”

“The DR.D pipe produced the best midrange power. It felt crisper than the other pipes.”

“This would be my choice because it felt torquier from the bottom to the middle. It doesn’t have the irritating bark off the bottom that the stocker has, but is the strongest where it counts.”

“It was fairly seamless through the middle. Best of all, it ironed out the flat spot and dip in the stock powerband. It was the most raceable of all the pipes.”

The DR.D exhaust produces 35.99 foot-pounds of torque at 7400 rpm. This is 0.23 foot-pounds more than stock. The DR.D pipe makes the most torque in this test. This pipe covers all the bases. It was rated highly by every test rider, and while it didn’t get the coveted top spot on any rating charts, every tester admired its solid performance. This is a pipe that could be used by an AMA Pro, Vet Pro, Intermediate or Novice. It was also one of only two pipes to break the 60-horsepower barrier.

“The FMF pipe was strong on the bottom and had a little powerband dip before the midrange. I liked the dip because it gave me a starting point to know when to go.”

“The FMF system was strong on the bottom and strong on the top. It pulled really good across the range but was a little jerky in the middle.”

“To me, the FMF pipe mimicked the stock powerband but with more personality, especially from the mid on up.”

“It really wanted to carry its power over the top and that made it easier to use on the high-end.”

The FMF exhaust produces 35.65 foot-pounds of torque at 8000 rpm. This is 0.11 foot-pounds less than stock. The FMF pipe makes the least torque in this test. 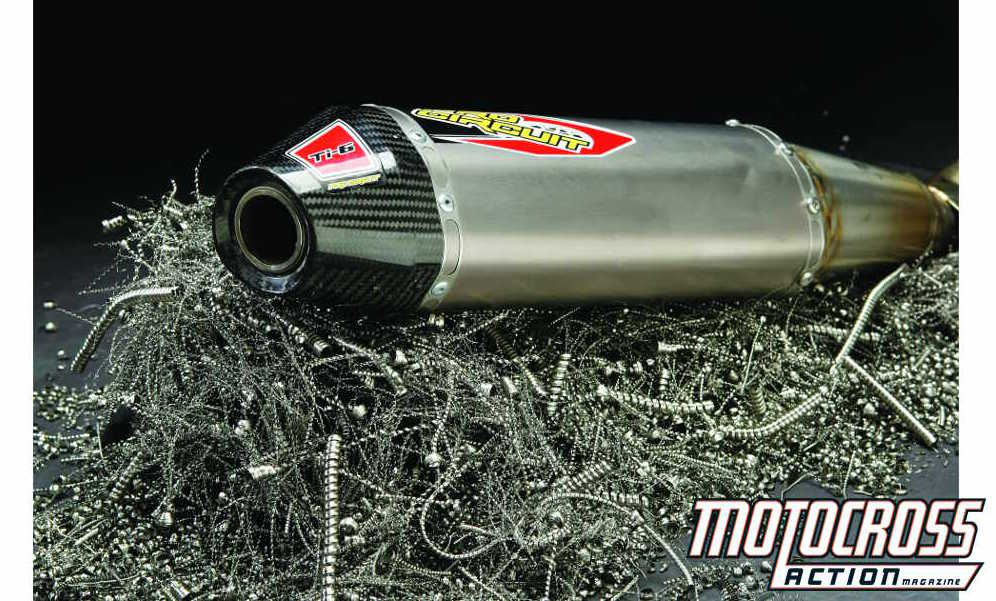 This pipe requires a modicum of talent to use. The power is different in that it isn’t as broad as the stocker’s, but is placed where it can be used very effectively—just not by ham-fisted riders. We don’t think Novices would like the Pro Circuit pipe because of its midrange focus. Paradoxically, a Pro would probably want more over-rev, which makes this a good Intermediate or talented-Vet pipe.

“Pro Circuit was the only company that tried to redesign the powerband. They moved it up.”

“Pro Circuit traded some bottom for more middle and a much faster rev cycle.”

“It was the smoothest off the bottom and then seemed to pull hard from the mid on up.”

“It had the smoothest transition from low to mid and pulled strong into the top, but it signed off earlier.”

“Its powerband is mostly focused on the midrange.” This pipe is a good, all-around performer. It not only breaks 60 horsepower at peak, but it produces the most horsepower off idle. Once a pipe covers the fringes, all it needs is a solid midrange to come out on top. A very good pipe for everyone from Novices to Pros.

“To me, the Yoshimura pipe’s bottom end was weird, but the Yoshi pipe was at its best from the mid on up to the top.”

“I thought it was the most powerful pipe of the five, but it felt kind of flat.”

“This would be a great pipe for a Pro because of its strong power in the upper ranges, but probably not as good for Vets or Intermediates who don’t use the entire rpm range. Conversely, a Novice would like the easy-to-use spread of power that doesn’t require much thought to use properly.”

TAKE A LAP OF THE 2014 LAS VEGAS SUPERCROSS TRACK