For 2021 there will be no Factory Yamaha effort. They have combined forces with the Star Racing Yamaha team. Dylan Ferrandis and Aaron Plessinger will be the first riders to man the 450 team.

A long-time partner in the 250 support class and amateur ranks, the Monster Energy Star Yamaha Racing team has had a history of success with 11 titles in the professional championships and multiple Amateur National titles. The team will now add the 450 premier class to its tent to provide a consistent program for riders advancing through the SX/MX racing ranks. Together, Star and Yamaha will continue to work towards the goal of winning championships. Along with key sponsorship from Monster Energy, the team will receive full support from Yamaha Motor Corporation, USA. 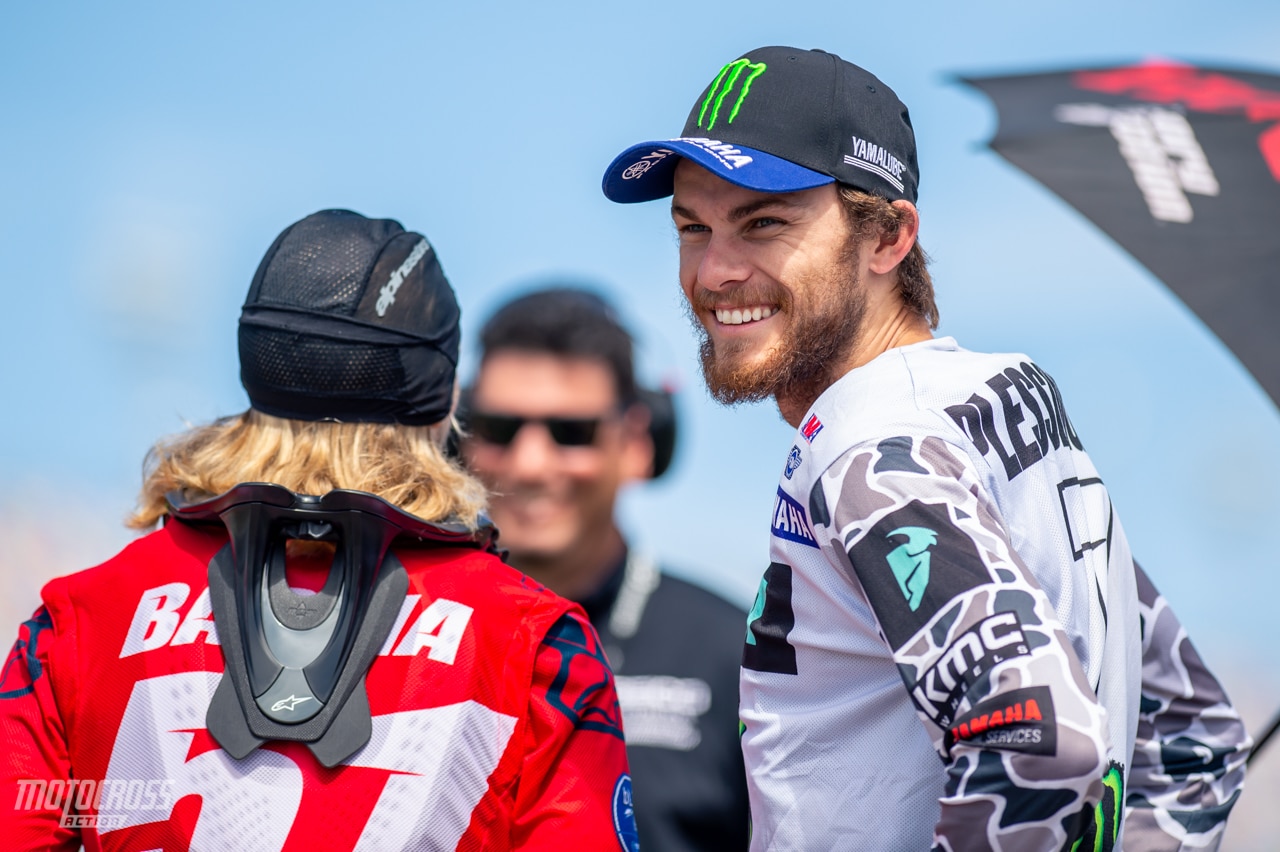 Aaron Plessinger will be back on Yamaha again for the 2021 Supercross season. His teammate of the last few years, Justin Barcia will not. He will be on the GasGas team for 2021.

Plessinger returns with Yamaha for his third season in the 450 class. Two of the titles added to Monster Energy Star Yamaha Racing’s tally were earned by Plessinger in 2018 – the 250SX West and 250MX Championship. The Ohio native has shown promise in his first two years in the premier class, but unfortunately has had injuries that have sidelined him for a good part of both championships in 2019 and the 2020 Pro Motocross season. As Plessinger returns to the team, he looks to build on his progress and come out swinging in 2021.

Making his 450-debut next year, Ferrandis looks to keep his momentum rolling with the Monster Energy Star Yamaha Racing team as he transitions to the premier class. After a great 2019 season with the 250SX West Championship and runner-up finish in the Pro Motocross 250 class, the Frenchman was on fire in 2020. He won both the 250SX West and 250MX Championship, scoring three supercross wins as well as eight moto wins and three overall victories in motocross. Jeremy Coker will be the team manager for the Monster Energy Star Yamaha Racing 450 squad. Jeremy Martin will be back on the team he won his two-National Championship on.

Fresh off a stellar 2020 season, Martin returns to Monster Energy Star Yamaha Racing’s 250 team to fight for the crown. Earning back-to-back titles in the Pro Motocross 250MX Championship in 2014 and 2015, Martin is eager to seal the deal in the Monster Energy AMA Supercross Championship and continue to add to an already accomplished 250 class career. Jeremy Martin and Christian Craig both came over from the Geico Honda team as the team lost their title sponsor and were unable to fund the 2021 season.

Craig also joins Star Racing’s powerhouse 250 line-up in 2021. The Californian has challenged for top honors on multiple occasions and was in the fight for the 250SX West Championship before being sidelined with an injury early in the season. Craig looks to fight for top honors in 2021 with the Monster Energy Star Racing squad. Christian Craig rode on the factory Honda team filling in for Ken Roczen. He will make the more to the Star Racing Yamaha team for 2021 and he’ll be back on a 250.

Nichols returns for his fifth season with the team. The Oklahoman hit the ground running in 2019 with his first 250SX win at Anaheim I and went on to score multiple podiums to finish third in the championship. Unfortunately, injuries have kept him out of most of this year, but now that he is close to full fitness, Nichols aims for the crown in 2021.

Justin Cooper also returns with the team for 2021. Since his first full season with the team in 2019, the New Yorker has impressed. He finished second overall in the 250SX East Championship with six podiums and went on to take his first overall win in Florida, ending the year third in the Pro Motocross 250MX Championship. Cooper carried that momentum over to 2020, scoring his first Supercross win at Anaheim I and finishing second in the 250SX West Championship. After coming back from a preseason injury, Cooper made a late season charge in the Pro Motocross Championship returning to the top of the podium at Thunder Valley to finish fifth in the standings.

Stepping up to the professional ranks at Round 6 of the Pro Motocross Championship was one of Star’s top amateur riders, Frye. The 19-year-old impressed with solid results, including a best result of sixth overall at the final race of the season.

Lead by team manager Wil Hahn, the Monster Energy Star Yamaha Racing 250 team has more top up-and-coming riders lying in wait: Nate Thrasher, Matt LeBlanc and Nick Romano. Thrasher, who recently joined the team had a good showing at the final two rounds of the Lucas Oil Pro Motocross season. Both LeBlanc and Romano have multiple Amateur Nationals and show a lot of promise for the future. All three riders full-time professional debut is yet to be determined.

Jeremy Coker – Monster Energy Star Yamaha Racing 450 Team Manager
“I have worked for Star Racing for six seasons and will be going on my seventh full season of racing with the team,” said Coker. “For the last five years, I was the Engine Technician and have been a part of a total of 10 championships wins. I am really looking forward to the opportunity to step up and manage the 450 program and look to take Dylan and Aaron to the top step of the podium throughout the seasons ahead.”

Wil Hahn – Monster Energy Star Yamaha Racing 250 Team Manager
“Coming off of two championship wins this season, I’m really looking forward to next season with the goal of carrying that success forward into 2021,” said Hahn. “We have a great lineup with Colt, Justin and Jarret returning, some great additions with Jeremy and Christian, and a bright future with Nate, Matt and Nick. I can’t wait for the new year!” Aaron Plessinger – Monster Energy Star Yamaha Racing 450 Team
“I’m really excited for next season with Monster Energy Star Yamaha Racing. I really had a good run with the team in 2018 with the 250 Supercross and Motocross title,” said Plessinger. “I love the team over there. I love the people on the team. I think we work really well together. The last two years haven’t been too good for me with some injuries and bad luck. I’m looking forward to getting back to my winning ways and having a good time doing it. Going into 2021, I couldn’t be more confident. With this team going in behind me I think we can do extraordinary things next year.” Dylan Ferrandis – Monster Energy Star Yamaha Racing 450 Team
“It’s been a dream of mine to fight for a championship in the 450 class in the U.S. I’m so happy to be able to do that with the Monster Energy Star Yamaha team,” said Ferrandis. “I feel at home there. I’m still feeling in paradise with two championships this year, but we will get back to work to fight next season.” Jeremy Martin – Monster Energy Star Yamaha Racing 250 Team
“I’m very excited to have the opportunity this late in the year to get back on the Yamaha for next year moving forward into 2021 with the Monster Energy Star Yamaha Racing team,” said Martin. “I’ve won two championships with them in the past so I’m excited to pick up where I left off and end my 250 career with a bang!” Christian Craig – Monster Energy Star Yamaha Racing 250 Team
“Moving to the Monster Energy Star Yamaha Racing Team is quite a big deal for me. Bobby (Reagan) has talked to me every year the past few years to get me over here but the timing didn’t feel right. Finally this year, I knew I needed to get out of my comfort zone if I wanted to take my career to the next level,” said Craig. “Their whole program has a lot of structure, which is something that has always benefited me and helped my confidence. I’m extremely grateful to start the next chapter in my career with these guys and look forward to putting in the results I know I’m capable of.”

MXA’S WEEKEND NEWS ROUND-UP: V-TWIN SMOKER, ENDUROCROSS & PASHA IS BACK WITH ANOTHER BUNDLE OF MONEY