SUNNY GARCIA: SURFING’S BIGGEST MOTOCROSS FAN IS IN TROUBLE; HANG IN THERE SUNNY

According to the Orange County register newspaper–

Sunny Garcia is not eating. Current events have ruined a normally large appetite. The scene feels a little like the moment in “King Kong” right before the giant ape tears up Manhattan. A subdued and somber Garcia sits behind his desk at Da Hui Clothing with his great passions spread around him, just out of arm’s reach. A stack of surfboards to his right. Motocross magazines in front of him. A picture of his wife, Raina, to his left. 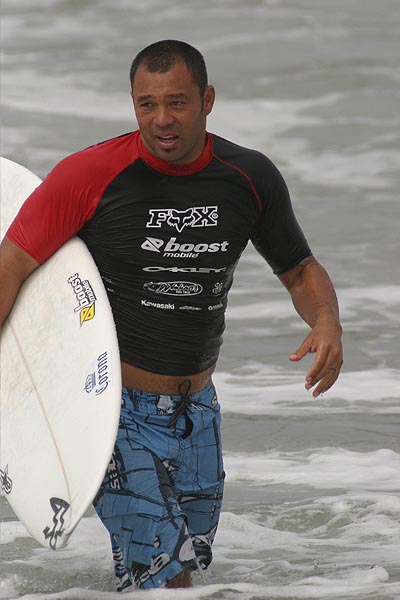 The 2000 World Champ pleaded guilty to tax fraud last month in a San Diego federal court. He could be sentenced to up to three years in prison August 28. The case has perhaps cost him his 10-year marriage as well as further eroded an already troubled image.

“Suicidal is probably the best way to describe it,” Garcia said of his current mood. “For me, it’s, ‘Welcome to the real world.’ Here I am, Sunny Garcia, the human being.”

The tax issue has been a cloud that has hung over his head since the mid-1990s. It’s just now coming ÿinto public view.

“I had to plead guilty,” he said. “It’s been a pain in the neck for the last 10 years hiring CPAs and lawyers to deal with my taxes. It all just kind of came to a head. For me, it just seemed easier to plead guilty and deal with the charges.”

He knows the blame falls squarely on his big shoulders, but Garcia said he can’t shake a certain cheated feeling himself.

“Being an athlete, my job is to go out and surf,” he said. “I hire CPAs to take care of this. I knew I was in trouble when the IRS was knocking on my door, telling me I’m going to jail back in 1997. My old CPA hadn’t filed or paid anything since the early 1990s. At that point, I was like, ‘Whatever. I’ll hire a new CPA and have him deal with it.’ My new CPA was caught behind the 8-ball and basically rushed to do stuff. In the rush, he missed stuff. I guess in the end the blame comes down upon me because I should have been checking. I didn’t. I left it for somebody else to do. All I know is I’m going to jail, and I could give a damn about how much money it is.”

The fines could reach $100,000 over money that came primarily from surf contest winnings. The notoriety of the court case took Garcia by surprise. Though he tried to tell them before the news was public, his kids found out from TV.

“My ex-wife called to say that I was on every TV channel in Hawaii and they were saying I was going to jail. My son was crying. It was followed up by the newspapers the next morning. That was heart- wrenching.”

He also didn’t realize the effect it would have on his current marriage to Raina, the daughter of surfing legend Joey Cabell. Their separation is just weeks old. “I would rather have lived the average life than to achieve all the things I’ve achieved and have it mean nothing,” Garcia said. “It’s probably pretty embarrassing for my parents to see me be brought down by this whole thing. The only thing I ever wanted to do in life was get married, have kids and raise a family.”

Garcia grew up in Waianae, Oahu, a tough town where a kid had few options. But Garcia’s ability with a surfboard gave him a very powerful one. He dropped out of ninth grade and went pro. At age 17, he was already in the top 20 and would spend more than a decade in the top 10.

Dodging an early drug habit, he would become one of the world’s great power surfers and tube riders. What he couldn’t dodge was a tough- guy image.

Garcia made it work for him as he matured. As president of the first surfers’ union group, he pushed for a higher prize purse minimum for events. A move that hardly touched top surfers like him, it was a major boost to those lower-ranked.

He eventually came to be thought of as “a big teddy bear” by many who know him.

“Even though I had a pretty controversial career, I fought for what I believe was right,” Garcia said. “Got into fights over the years, about my family or friends, or men acting up with my wife. I don’t apologize for any of that.

“I was lucky to have a talent that kept me out of trouble as long as it did. But did it really keep me out of trouble? Nah. I’m going to end in the same place as all my friends, but for a different reason.” The idea of prison time is beginning to weigh on him now.

He said of all the surfers on tour, only Andy and Bruce Irons have called to support him. He expects little affection this week. But Phil Irons, Andy and Bruce’s father, said Garcia is family.

“Sunny’s a good man. He’s like a big brother to my boys and even calls me on Father’s Day,” Irons said. “He and I have talked about this. I hope he gets this straight. I hope they don’t try to make an example of him.”

Garcia said the tax issue hastened his retirement, but it also has renewed his determination. He promises to return to the sport.

“If I make it through this, there will definitely be some kind of comeback. I don’t want to go out this way. If it’s a short sentence, I’ll spend the whole time just training. When I get out, I am going to go on the WQS and make it back on the WCT and do my last year the way I wanted to do it.”

But this week, Garcia just needs to ease his soul. “It might make me happy to jump in and hear a horn and surf against a couple of people. It might be the last time for a long time,” he said. “Huntington has always made me happy. The people have always been really good to me. Huntington Beach was the first place I surfed outside of Hawaii. It’s a very special place for me. With all the bad, I could use some good.”