As was the case on the 2015 models, there are six various types of forks being utilized on the 2016 motocross fleet. The players are Showa, Kayaba and WP. While this feature isn’t directed towards choosing an overall winner in performance (okay, so maybe we couldn’t help ourselves and selected a winner), you can draw your own conclusions based on the evidence provided. Of the fork options, one design–Kayaba SSS–has been on the market for a decade, while the others are considerably newer. Take a look at the fork technology on the market for 2016. Use this information as a guide. DESCRIPTION: The acronym SFF stands for “Separate Function Fork,” which refers to the fact that the fork has a spring in one fork leg and damping in the other. The acronym TAC stands for “Triple Air Chamber,” meaning that the SFF TAC fork has three separate and unique air chambers. The “piggyback” reference is because the balance chamber is located in an extension sticking out behind the right fork lug. The piggyback designation is required because Showa makes a SFF TAC air fork that does not house the balance air pressure in a remote reservoir (Honda CRF250). WHAT YOU NEED TO KNOW ABOUT SHOWA  SFF AIR TAC FORKS:
(1) All damping is in the left fork leg. The right-side fork cap is held on with a snap ring.
(2) Showa does not recommend changing oil heights on the air side of the fork, but in the left damper leg instead.
(3) Kawasaki and Suzuki suggest different outer chamber air pressures. We know factory riders who run as much as 20 psi in the outer chamber, and we have raced with 0 psi in the KX450F with no major issues. Suzuki suggest 0psi, while Kawasaki recommends 14.5 psi for 2016.
(4) If you blow a fork seal, the fork will not go flat because the main air pressure is held in the inner chamber, not the outer chamber. The Honda CRF250 fork is different from the Showa SFF TAC fork, in that the balance spring is internal. 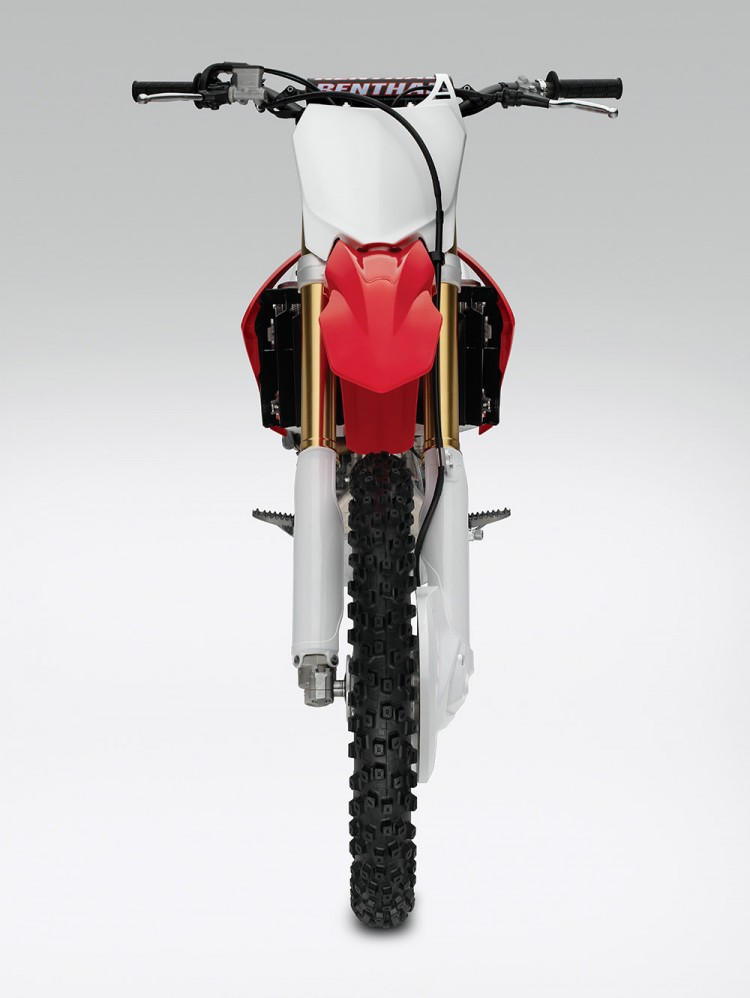 WHAT YOU NEED TO KNOW ABOU SHOWA SFF AIR INTERNAL FORKS:
(1) Air pressure for the balance spring is under the left fork lug. There is no oil inside the balance chamber on the CRF250 fork.
(2) Air pressure for the inner chamber is on top of the left fork cap. There was no Schrader valve on the fork cap for the outer chamber―just a bleed screw. But, in 2016 Honda added the Schrader valve.
(3) The left-side fork cap is held on with a snap ring.
(4) All damping is in the right fork leg.
(5) Showa does not recommend changing oil heights on the air side of the fork but in the left damper leg instead.
(6) If you blow a fork seal, the fork will not go flat because the main air pressure is held in the inner chamber, not the outer chamber. The Kawasaki KX250F has long come with Showa’s SFF technology. That trend continues for 2016. DESCRIPTION: The SFF acronym stands for Separate Function Fork, which refers to the fact that it has its spring in one fork leg and damping in the other. Think of the SFF as an SSF (Single-Sided Fork), because that’s what it really is. Showa calls it a Single Function Fork because each fork leg has its own function―but that would more accurately make it a Double Function Fork (DFF). The major difference between the original Showa SFF fork and Showa SFF TAC fork is that the plain SFF uses a coil spring instead of air pressure. Additionally, the coil spring can have its preload adjusted via a clicker on top of the right fork cap. WHAT YOU NEED TO KNOW ABOUT SHOWA SFF COIL SPRING FORKS:
(1) All damping is in the left fork leg.
(2) Changes to oil height make the most difference on the left fork leg (damping side), although you can add or remove oil from the right (coil spring side).
(3) Spring pre load can be adjusted via the dial in the center of the right fork cap. Four clicks of the preload adjuster are equal to 1mm of preload.
(4) There are air bleed screws on top of both fork caps.
(5) If you blow a fork seal, there is no danger of a coil spring going flat. DESCRIPTION: The WP 4CS fork is quite unique in its design and philosophy. For example, you can change the fork spring without taking the forks completely apart. Additionally, the oil height is set by the old-school method of measuring down from the top of the fork to the oil in millimeters. The Kayaba PSF-2 and WP 4CS share the concept of utilizing one fork leg for rebound damping and the other for compression while keeping both compression and rebound damping shims the same in both legs. What makes one leg dedicated to compression as opposed to rebound is the free-bleed design. 4CS stands for Four Chamber System, and it shares nothing in common with the previous WP bladder fork. Only American bikes will get 4CS forks. European bikes will get the WP bladder forks. WHAT YOU NEED TO KNOW ABOUT WP COIL SPRING FORKS:
(1) Rebound damping is in the right fork leg.
(2) Compression damping is in the left fork leg.
(3) The 4CS fork has a different front-axle offset from the 2014 WP bladder fork and uses a smaller 20mm front axle.
(4) WP is the only fork company to put easy-to-use dials on the fork caps for compression and rebound as opposed to screwdriver slots.
(5) If you blow a fork seal, there is no danger of a coil spring going flat. The 2016 Honda CRF450 and Suzuki RM-Z250 (previously the RM-Z250 came with Showa’s SFF layout) come with the KYB PSF generation 2 air fork. Note that the fork legs on the CRF450 are slightly longer for 2016, compared to last year, in an effort to improve chassis balance. DESCRIPTION: Honda and Kawasaki were the first bike manufacturers to switch to Kayaba PSF air forks. In 2015, Kawasaki bolted on the Showa SFF TAC piggyback fork, while the Honda CRF450 received a vastly updated version of the original PSF air fork. Suzuki followed in Honda’s footsteps for 2016. The PSF-2 fork is still a single-chamber air fork, unlike its triple-chamber competition, and has air pressure in both legs. The biggest difference between last year’s PSF fork and the PSF-2 is that the Kayaba PSF-2 fork uses the left fork leg for compression damping and the right fork leg for rebound damping. As a bonus, there are three fittings on each fork cap: one is for air pressure, one is for high-speed compression or rebound, and the other is for low-speed. WHAT YOU NEED TO KNOW ABOUT PSF-2 PNEUMATIC SPRING FORK:
(1) Closely mimicking the WP 4CS fork (and the old Marzocchi M1 fork), the damping in both legs is close to identical―save for the different location of the free-bleed orifice. It is the free bleed that makes the right side a rebound fork and the left side a compression fork.
(2) The PSF-2 uses a coil spring as a balance (negative) spring.
(3) There is also a small top-out spring to help on rebound.
(4) If you blow a fork seal, air pressure can leak out of that fork leg. Yamaha has remained true to Kayaba’s SSS spring layout for a decade. DESCRIPTION: It may seem strange, but the king of fork shootouts is the oldest. Introduced for the 2006 models, Kayaba’s SSS forks have owned the racetracks of America for the last eight years. The last Yamaha forks before SSS were the 2005 Showaba AOSS forks, and those forks are ancient history, but SSS forks are still with us. Yes, the SSS forks have been updated over the years, but not enough to make anyone consider them to be cutting edge. SSS stands for “Speed Sensitive Damping,” which Yamaha defines as a fork that is “90 percent reliant on the speed of the fork’s movement” and only 10 percent metered by the position of the fork piston during its stroke. To tell the truth, the SSS hyperbole doesn’t mean much, because these are basically old-school forks that get their greatness from solid fluid dynamics and superb testing. WHAT YOU NEED TO KNOW ABOUT KAYABA SSS COIL SPRING FORKS:
(1) The compression clicker is on top of both fork caps, while the rebound clicker is under the fork legs.
(2) Over the years, Yamaha has increased the spring rates to keep up with changing track designs and rider speeds.
(3) For most smaller riders, the 2014 SSS forks were too firm on the YZ250F. For 2015, Yamaha softened the damping to make the forks more resilient.
(4) Weight is the only downside of conventional two-spring forks. Air forks can be as much as 2 pounds lighter.
(5) If you blow a fork seal, there is no danger of a coil spring going flat.

DUTCH GP 250 RESULTS: TIM GAJSER IS BACK IN FRONT