TEN THINGS YOU NEED TO KNOW ABOUT TRIPLE CLAMP OFFSET 1) Less fork offset (20mm as opposed to 22mm) increases trail and, on paper, should make the bike steer slower and improve stability. Yet, for some reason (perhaps the wide number of factors involved in bike handling), less offset often results in a bike that turns sharper and is more accurate.

2) To make a motocross bike stable at speed, the steering head angle is angled forward. The degree that the steering axis is angled forward is called “head angle.” Don’t confuse it with “rake,” which is a different number that relates to how the forks are angled in relation to the head angle (most forks are not raked at a different angle from the head angle). A chassis with a slack head angle steers less when you turn the handlebars and wants to remain in a straight line (think chopper). A steeper head angle turns quicker and is less stable at speed (think trials bike).

5) Trail is a measurement of how far the contact patch of the front tire is behind the point where the steering axis hits the ground. The number is achieved by extending an imaginary line down the center of the head angle to the ground. Then, a perpendicular line is dropped through the center of the front axle to the ground. The distance between where the two lines hit the ground is the trail measurement. As a rule of thumb, it should be between 4 and 5 inches on a motocross bike (more on a chopper and less on a trials bike). 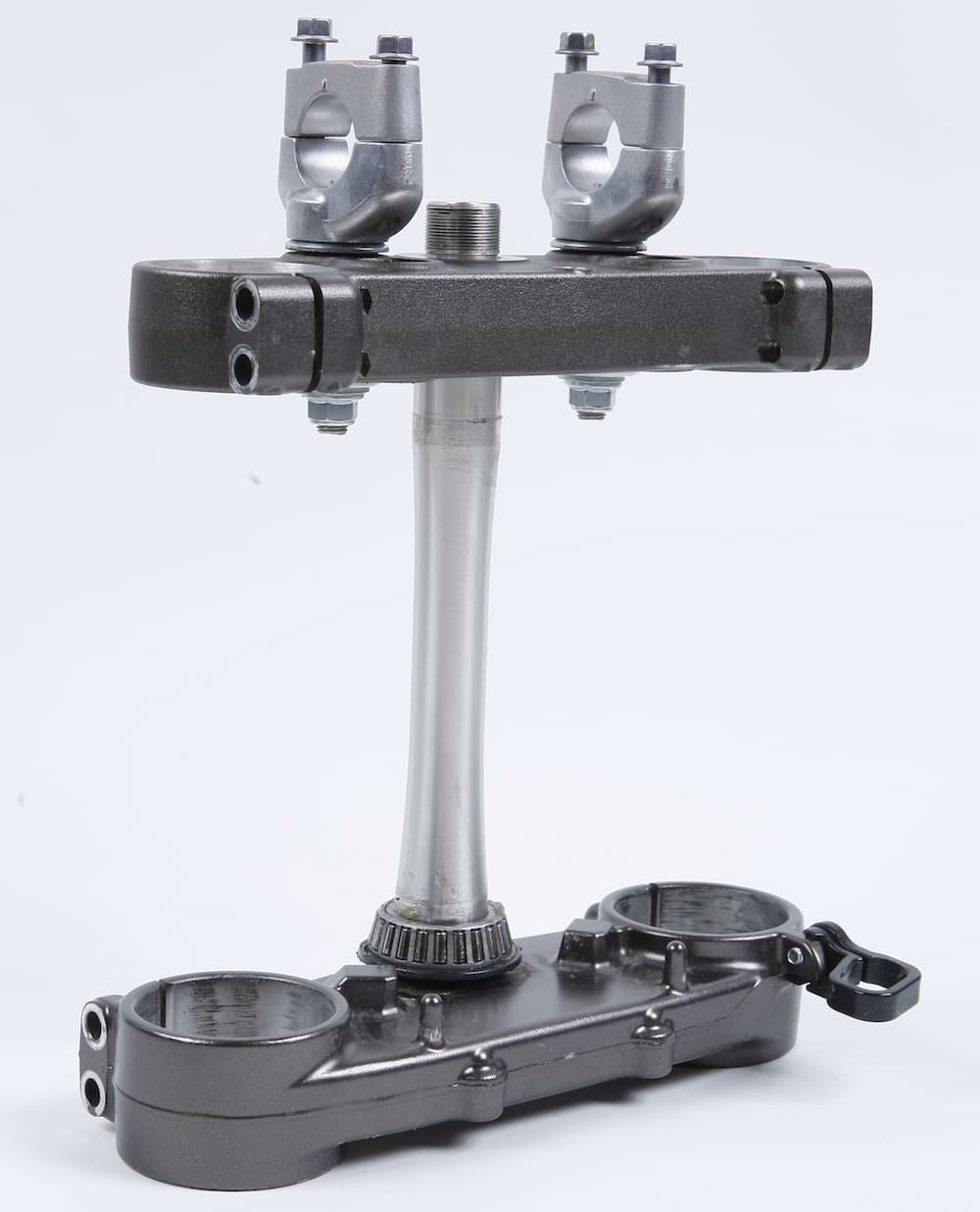 6) Trail is what makes it possible for you to stay balanced on two wheels. Take a shopping cart as an example. The cart’s steering axis is vertical—90-degree head angle and an axle offset of about an inch behind the axis. When the cart is pushed, the wheels instantly swing into alignment. The trail on a motorcycle works the same way. The front end of the bike wants to snap straight and keep the bike upright every time it is driven forward. The farther the wheel is behind the steering axis, the more stable the bike—the closer, the less stable. To get a bike to turn quickly, like a shopping cart, would require very little trail.

7) A longer trail measurement gives greater caster effect, heavier and slower steering, and a more stable feel in a straight line. That is exactly what less fork offset should achieve. Conversely, more fork offset reduces trail and should cause the bike to steer lighter and quicker—and the front end to feel more nervous in a straight line.

8) Axle offset is how far the axle sits ahead of the fork centerline. Axle offset affects trail. More axle offset reduces trail and vice versa. As a rule, changing trail at the axle is better than at the clamps (which KTM did on the 2014 Factory Edition 450SXF and will on all 2015 models). The more offset at the triple clamps, the more the rider will feel the weight of the fork tubes when steering. Although there needs to be some offset at the clamps to give fork clearance for a full turning radius, the less the better to decrease the fork’s moment of inertia. The lightest-steering bikes will put as much of the given offset as possible into the axle clamps.

10) How can reduced offset make the bike steer with a much lighter, quicker feel when the science says it should do the opposite? Even though the actual steering geometry is slower-turning and more predictable, increasing trail is also the same thing as moving the engine forward and putting more weight on the front tire. In the end, riders find that clamps with reduced offset steer better, because altogether it gives the bike a more stable feel—but with easier steering and with a front tire that stays more planted.