Round 2 was one not to miss. Heading into the second round of the 2022 Monster Energy Supercross series, Ken Roczen and Christian Craig led the championship. However, that would not be the case heading into the third round of the season, San Diego. Despite several riders knocking themselves out before the season started and at round 1, Christian Craig would not have his work cut out for him when it came to qualifying, having to battle a handful of riders for the top spot. In the premier class, it would be a Star Yamaha show as Eli Tomac and Dylan Ferrandis would dominate the lap time leaderboard.

Photos by Travis Fant and facts by Ben Bridges After getting a great start behind Shane McElrath and Adam Cianciarulo, Jason Anderson would make the pass for the lead after the two front runners ran out of steam, and eventually win the race. Aaron Plessinger would follow Jason’s lead, making his way up to second place after the rest of the competition started to slow down. 250SX CLASS REVIEW // CRAIG GOES BACK TO BACK Christian Craig would grab the fastest lap time out of all of the 250s. He would then proceed to win his Heat race and eventually the Main Event. The rest of the 250 field spent the majority of their Main Event picking their bikes up making it easy for the 250 veteran. Hunter Lawrence would make quite the comeback racing up to second place. WHAT WENT ON IN OAKLAND The beginning of the end for Jo Shimoda for Round 2. This was the story of the 250 class that night. Riders like Jo Shimoda, Michael Mosiman, Carson Mumford, and more spent their night tumbling across the Oakland stadium. However, this was the most impressive crash by Jo Shimoda. Jo missed a whoop landing his front tire into the face of the following one, sending the 30 over the bars. Jo rolled out of the crash perfectly and got to his bike near instantly. Here’s Carson Mumford getting a little buck-wild in the whoops. Adam Cianciarulo would have a bummer of a night as his injury would hold him back from getting a top 10 after grabbing a very impressive holeshot. Adam shows to have the speed but we wonder if these results will be the theme of the season if his injury continues to diminish his returns. Ken Roczen entered Oakland with red plate however he would lose it heading to San Diego. Ken Roczen had a near-scare crash in qualifying when he would go down in the whoops and his teammate Chase Sexton would nearly take his head off. But then in the Main Event, he would go down again at the end of the whoops and lose valuable spots in the race. Now, Justin Barcia is in possession of the valuable red plate.

450 LCQ MADNESS: RYAN BREECE VS. ADAM ENTICKNAP VS. HIMSELF

If you missed the 450 LCQ, you may have missed one of the most frustrating/entertaining LCQs this season. Adam Enticknap rode in third place after making a close pass on Ryan Breece. Several turns later Ryan Breece would absolutely ram into the side of Adam, sending the Suzuki rider off the bike and into a tuff block. Mind you, this was for third, not even the fourth place transfer position. A lap later, Breece wads himself in front of the competitor that he just took out.  Then on the final lap karma would show its hand once again literally launching the 200 into the face of the final turn just before the finish line, in the corner of the camera pan. Funny? Maybe. Bummer for Adam? Possibly. Hotel? Trivago. Garrett Steinke took his 125 all the way to the Main Event, no LCQ required. We would share his words for his fans but we like to keep it family-friendly here.

450 POINT STANDINGS AFTER ROUND 2 – RACE RESULTS 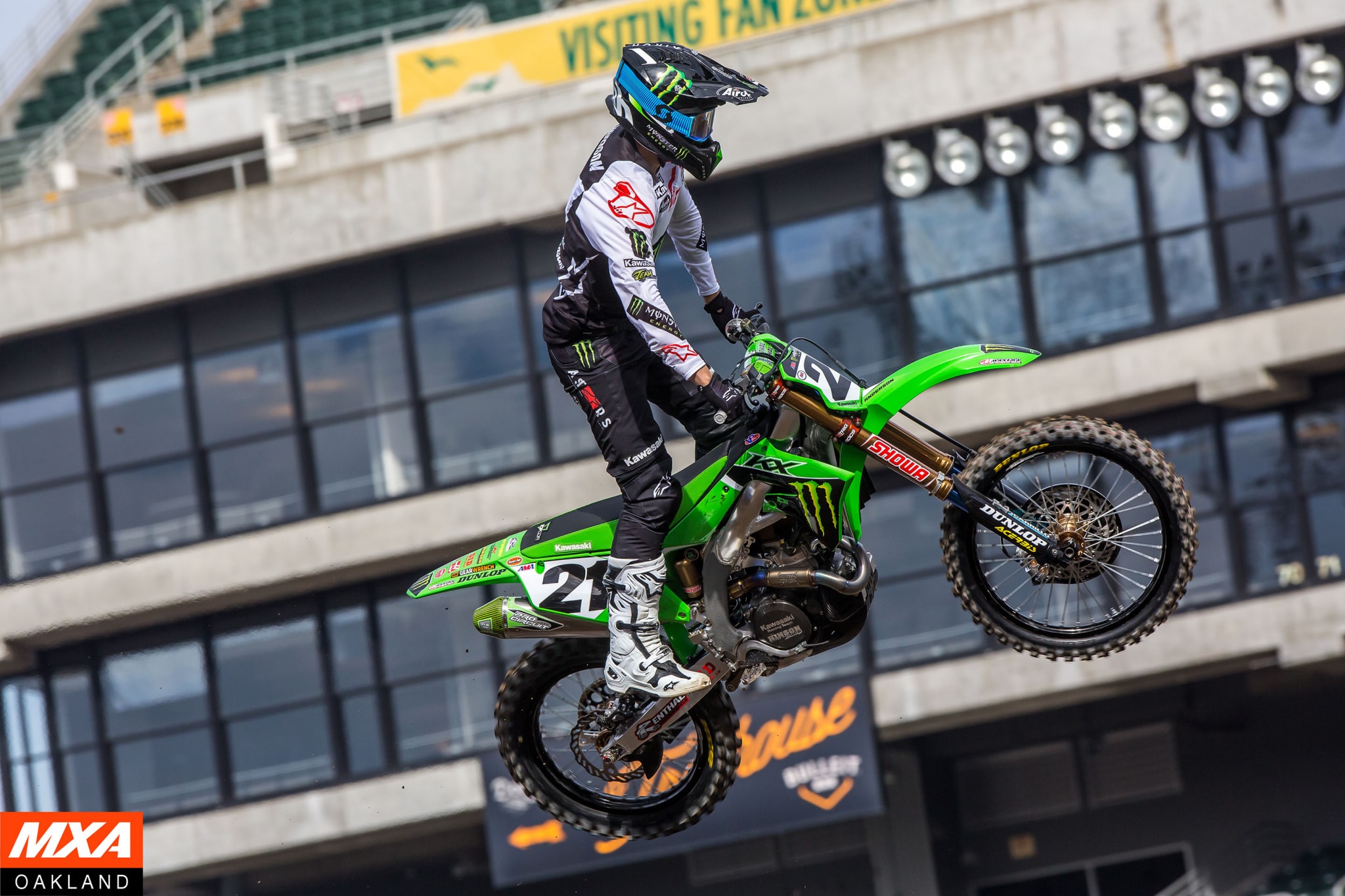 If you told us at the beginning of the season that Justin Barcia and Jason Anderson would be leading the points by round 2, we may have doubted you. But this proves that anyone in the top 10 of the 450 class has the potential of winning. Christian Craig has a solid lead on the 250 field after round 2. Hunter Lawrence and Seth Hammaker are both tied for second in the points after round 2. Michael Mosiman is technically fourth in the championship after Oakland.

CATCH UP ON THE LATEST VIDEOS: DEEGAN TRAINING WITH 250 CHAMPS BEFORE 2023 PRO DEBUT

RUMORS, GOSSIP & UNFOUNDED TRUTHS: ONE MORE WEEKEND OFF BEFORE THE FIREWORKS…