How many times in my life had I struggled with a potpourri of parts, trying to form some of semblance of rationality out of their interconnection to each other and me? In other words, I was philosophizing instead of spinning wrenches. I had been in out in the garage for a couple hours, but I hadn’t made any progress…if you judge progress by getting closer to a specific goal.

Time was passing slowly, not helped by the fact that I was easily distracted and had to pull myself away from tuning in my shop radio, changing burned out neon bulbs or tightening the hinges on my knee braces. There was a certain amount of rush involved—not just because I wanted to race my bike the next morning, but because Louella had the nasty habit of pulling the circuit breaker on the garage if I stayed out there past midnight. Circuit breaker hour was rapidly approaching when help arrived.

“I can’t stay very long,” said Fred Phalange as he walked into my garage. Fred was my shining light—a light I would need if I didn’t get the work done by the time the clock hit 12. Perhaps I should have started rebuilding my trusty, but rusty, motocrosser earlier in the week, but that would have negated a lifetime of waiting to do things at the last minute.

DAVE ISN’T THE KIND OF GUY YOU WANT WORKING ON YOUR BIKE—GIVEN THAT WHEN HE THOUGHT HIS FORKS WERE TOO STIFF, HE TOOK TWO BOLTS OUT OF HIS TRIPLE CLAMPS TO SOFTEN THEM UP.

“If you jump on the engine, I will tackle the suspension, linkage and chassis,” I said to Fred as I cleared a spot on the workbench next to where I had placed the engine earlier in the day. He groaned when I handed him a box of miscellaneous parts. Fred was a workmanlike mechanic; steady, thorough and logical. He had tuned for a local Pro at a couple Nationals and considered himself to be above the grunt labor of working on my bike. Thus, he was not a big fan of my intuitive mechanical style and was bugged by my willingness to scatter parts to the far corners of the garage without rhyme or reason. But, he had volunteered and even though he seemed dejected when I happily agreed to accept his help—at least he had shown up. The same can’t be said for Crazy Dave who begged off because of the sudden death of his grandma—this was the third time she had died since I’d known Dave. And, in truth, Dave isn’t the kind of guy you want working on your bike—given that when he thought his forks were too stiff, he took two bolts out of his triple clamps to soften them up. 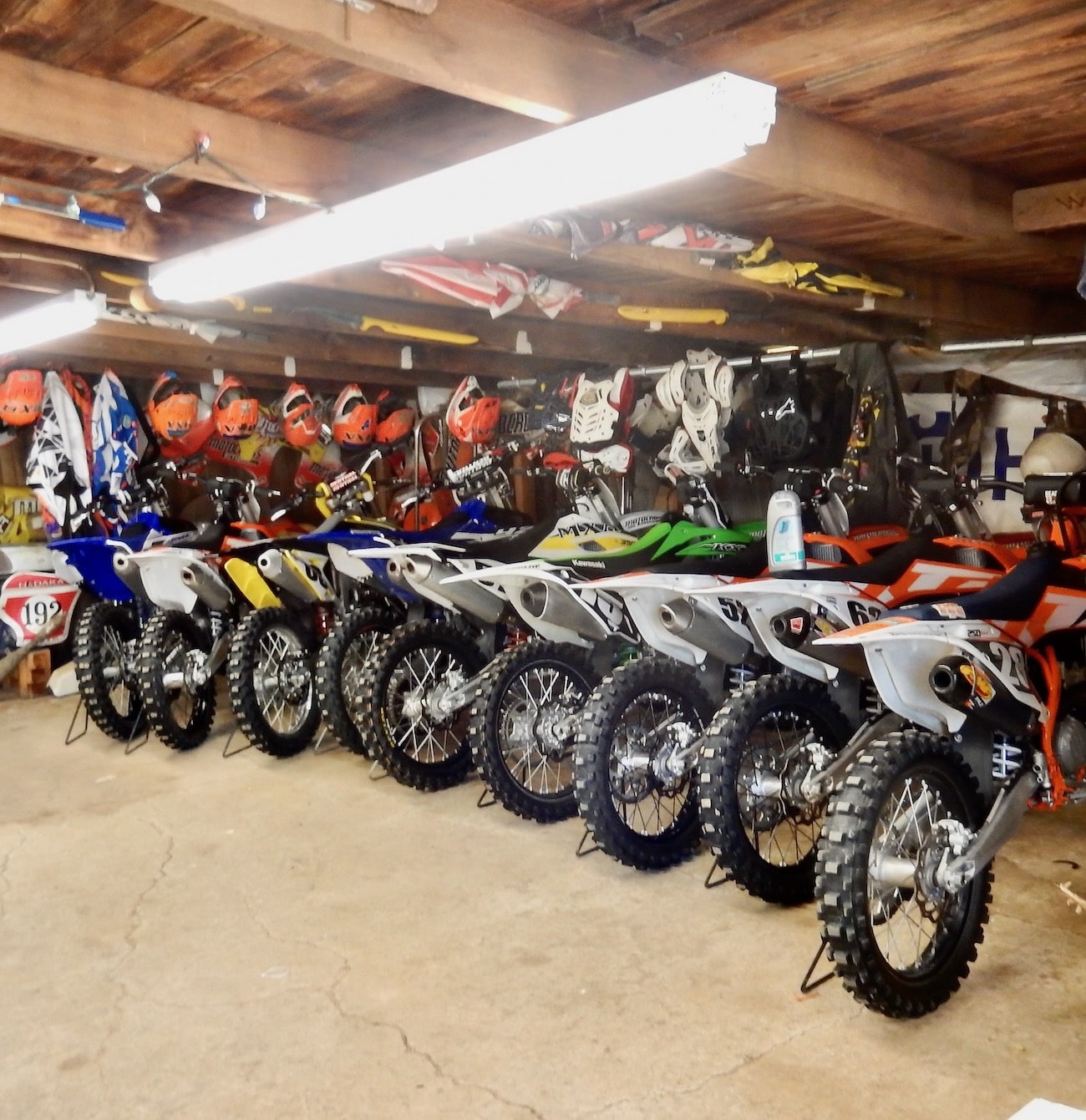 Fred and I worked fast and the minimal conversation we had was limited to the kind of technical talk that pervades late nights in the garage.

“Are these snap ring pliers innies or outies?”

“Who’s got the eight T-Handle?”

“Isn’t this my crescent wrench?

“I wonder where this thing goes?”

“Who chose this radio station?”

“Doesn’t this rag’s oil stain look like a map of Newfoundland?”

“Is it lefty loosey and righty tighty?”

“What idiot designed this part?”

“Do you have an Easy-Out?

“Hey, who turned off the electricity?”

A quick trip to the house got the lights back on and Fred and I went into overdrive to try to get the project done. You’d think that two guys working at different tasks could do the job in half the time, but it wasn’t happening. Not that we didn’t try. Every now and then, I’d hand him a part and ask if he could work on it, while I finished some other assignment. We worked in almost total silence and we worked fast out of fear of Louella’s electrical wrath.

Finally, I gave up. This job was too big for one night.

That’s when Fred looked at me and said, “Together?”