Though motocross competition can be dated back to the 1940s in Europe, the sport which featured natural terrain tracks and long motos had never been practiced in America. Dirt-track, scrambles, enduro, and desert racing—yes, but not motocross. In the 1960s Edison Dye ran a business that of set up motorcycle tours in Europe. It was while leading one of these tours groups that Edison was exposed to the sport of motocross. By the mid-1960s, European brands like Husqvarna, CZ, and Bultaco were the machines of choice and these motocross models were not being imported into America.

EDISON CONVINCED THE HUSQVARNA FACTORY TO LET HIM BRING IN A COUPLE OF BIKES WITH THE POTENTIAL OF BEING THE HUSQVARNA IMPORTER FOR AMERICA. THE YEAR WAS 1966. Edison Dye brought the first true-to-life motocross bikes to America. He was the first Husqvarna importer.

Dye loved the sport he saw, although he was not a racer himself, and most importantly, he saw a business opportunity. Edison convinced the Husqvarna factory to let him bring in a couple of bikes with the potential of being the Husqvarna importer for America. The year was 1966.

Key in the growth of Husqvarna in the USA was the hiring Malcolm Smith as his rider. Malcolm would immediately start winning desert and scrambles events on the lightweight and powerful machine. As interest started to pick up in the USA, Dye convinced the Husky factory to send the three-time 250 World Motocross Champion Torsten Hallman over to work with Edison and compete against the best American riders at tracks across America.

The first event held in the fall of 1966 was at Pepperell, Massachusetts, on a track designed by Hallman  that combined the existing scrambles track with the hilly natural terrain around the facility. All of the top local riders were invited to compete and most were lapped by Hallman in each of the three 45 minute motos. Hallman and Dye set up six more events in 1966 and the results were always the same. Don’t confuse the Inter-Am series with the Trans-AMA. Edison didn’t just promote the first America-versus-Europe race series, he imported the bikes, ran the races and paid the GP riders to come to the USA to promote the sport.

In the fall of 1967, Edison set up the first Inter-Am series, which hosted the top European stars including Torsten Hallman, Bengt Aberg, Roger DeCoster and Joel Robert. Even though the American riders didn’t have a chance against the experienced GP veterans, they were quick studies and the Euro stars were willing to teach them the basics of motocross. Torsten Hallman even conducted motocross schools to help the American teenagers. Motocross machines sales and purchases of the unique apparel worn by the stars took off at a rate that was, and still is, unprecedented in any motorsport.

THE RIDERS WERE LIVID AND THE AMA RESPONDED BY BANNING EDISON DYE FROM PROMOTING MOTOCROSS EVENTS FOR THE REST OF HIS LIFE. Edison Dye (gar right) with the Husqvarna team that he brought to America to race. Can you spot Torsten Hallman, Bengt Aberg, Hakan Andersson and Arne Kring?

The Inter-Am series would continue to grow under Dye’s stewardship until 1970. Though the AMA had no interest in motocross, they finally saw the light when the saw the dollars being generated and literally stole the series away from Edison. Business is business and the AMA went to the track owners and made them a better offer. Part sugar and part lime, the AMA cajoled the track owners with both threats and offers. Plus, the AMA had the power to counter-promote against Edison’s fledgling Inter-Am with their own Trans-AMA series. Edison Dye saw the writing on the wall and capitulated and became an AMA race promoter.

The first couple of years Dye and the AMA worked together on several events, but by 1974 Edison had only one event on the Trans-AMA calendar. That event was the St. Louis Trans-AMA. All Trans-AMA events were billed as “rain or shine.” When it rained all day Saturday and continued on the Sunday morning of the St. Louis Trans-AMA, Edison got nervous. The track was on a flat field and it quickly became a swamp. When very few spectators showed up in the rain, Edison informed the riders that the race was canceled.

“I’ve already lost $10,000 promoting this event and I’m not going to lose another $10,000 on purse money!” Understandably, the riders were livid and the AMA responded by banning Edison Dye from promoting motocross events for the rest of his life. It was a cruel blow for the man who made motocross happen in the USA. Things got worse for Edison Dye’s influence in motocross. Husqvarna wanted to control their own future in America and they bought Edison and his Med-International Import company out. Whether you want to say Edison was forced out of motorcycling or it was a good time to retire, Edison disappeared from motorcycling for the next 23 years. His name was never spoken and the fact that he was the man solely responsible for bringing the sport to America was forgotten.

By 1997, the White Brothers World Vet Motocross Championship had grown to be a huge event. As the owner of the White Brothers, I had thrown my company’s full support behind this race and with Glen Helen owner Bud Feldkamp I decided to start honoring the men who had contributed to the sport of motocross with the “Motocross Lifetime Achievement Award.” The first year we honored Roger DeCoster, a huge contributor to the growth in America (and the World) and in 1998 it was the dynamic Ricky Johnson.

TWO WEEKS BEFORE THE 1999 EVENT, I STILL HADN’T DECIDED WHO WE WOULD HONOR. WHILE DRIVING HOME FROM A GLEN HELEN RACE, I REFLECTED ON A STORY MY FRIEND LARS LARSSON HAD SHARED WITH ME. At the 1999 World Vet Championship Edison Dye was toasted by Malcolm Smith (right), while Roger DeCoster and Feets Minert wait in the background.

Two weeks before the 1999 event, I still hadn’t decided who we would honor. While driving home from a Glen Helen race, I reflected on a story my friend Lars Larsson had shared with me. Lars told me about a visit he and Bengt Aberg had made the year before to visit the aged Edison Dye in San Diego.

“Bengt Aberg and I drove up to his house,” said Lars. “The lawn was brown and the house wasn’t in very good condition. We knocked on the front door and after a long wait, Edison opened the door. He used a cane to walk and he looked every bit his 80 years. When he saw us, he broke down in tears. I don’t think he had had contact with anybody from motocross in years. It meant a lot to all of us to have this reunion.” Lars went on to mention that Edison Dye had not been to a motorcycle event since that fateful day in St. Louis in 1974. Edison Dye  at the 1999 World Vet Championship at Glen Helen.

Wham, it hit me! I needed to find Edison Dye and bring him to the 1999 World Vet Championship to receive the “Motocross Lifetime Achievement Award.” I called Roger DeCoster and Malcolm Smith and their response to honoring Edison was overwhelming. The respect and admiration they had for this man and their willingness to help in the presentation pushed me on. I was also aided by the only person in motorcycling that had visited Edison over the years, Frans Munsters, the owner of Twin Air Filters. Frans gave me the contact information for Edison. 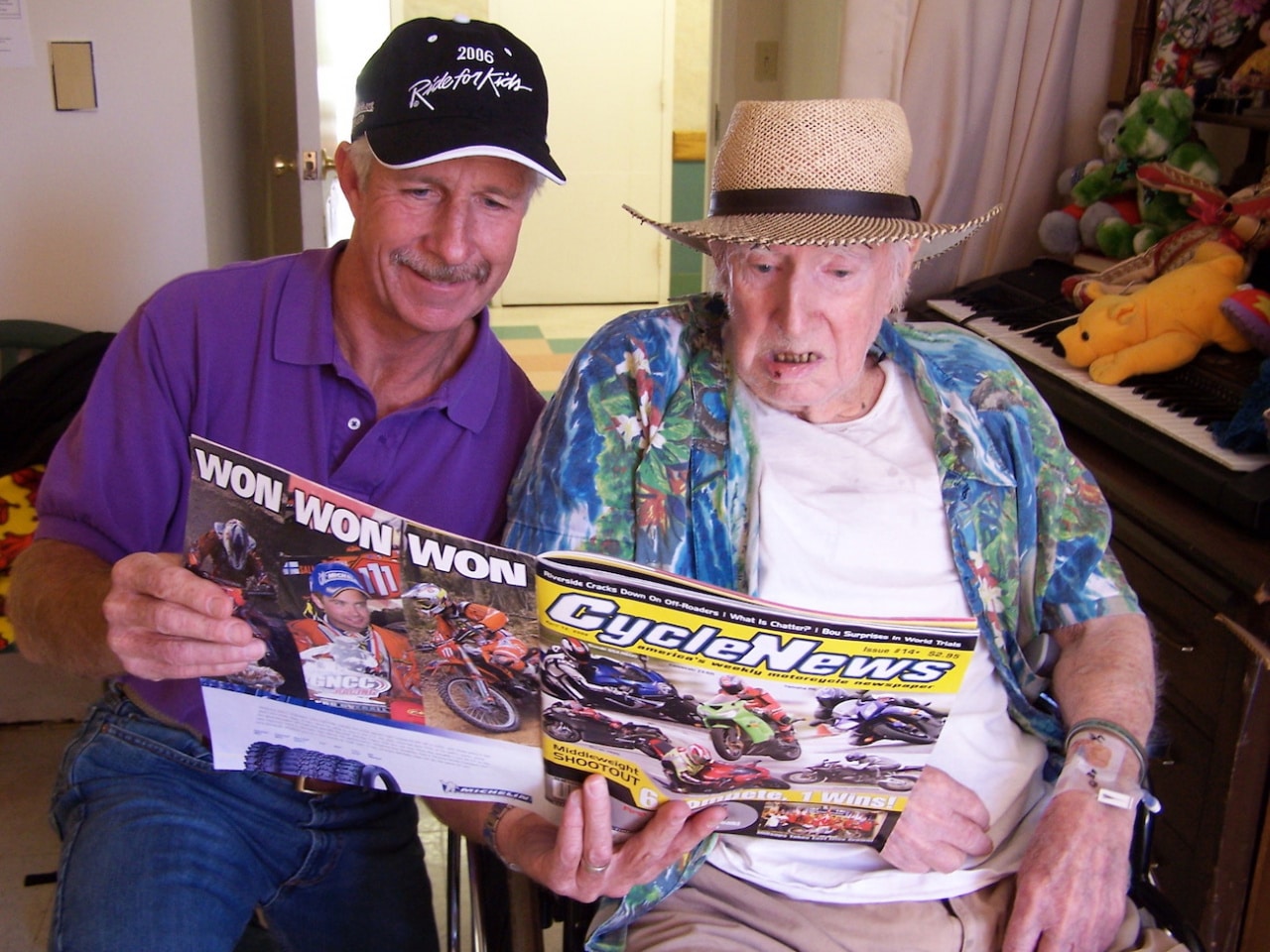 When I called the number, Edison was in Arizona, but Edison’s daughter Shirley was eager to help and allowed me visit and spend the afternoon reviewing boxes of photos and other memorabilia that was in total disarray. Unbelievable! The pictures, the letters — they told the story! This man was truly the father of motocross in America and the motorcycle world needed to be reminded!

The World Vet event was a huge success! We brought Edison on to the track in a limo and he was joined in the presentation by Roger DeCoster, Malcolm Smith, Lars Larsson, Chuck “Feets” Minert and others.

AFTER ALMOST 25 YEARS AWAY FROM THE SPORT HE STARTED, EDISON DYE WOULD GET THE CREDIT FOR BRINGING THE SPORT OF MOTOCROSS TO AMERICA. An emotional Edison Dye breaks down as 45,00 fans cheer for the “Father of American Motocross” at Anaheim Stadium in 2001. Roger DeCoster and Tom White presented him with the Mickey Thompson Award.

Fortunately, after almost 25 years away from the sport he started, Edison Dye would start to get the credit for bringing the sport of motocross to America. He imported the bikes, he convinced the top riders in the world to race in a fall series that became the Inter-Am, and he almost single handedly caused the sport to grow in America at an unprecedented rate.

I feel very fortunate that Edison and his family became close friends of mine. So much of the success that I have enjoyed in the motorcycle business can be attributed to him. Even though he had suffered several strokes, his mind was sharp. My favorite memory is picking him up at his Lemon Grove nursing home to go out to lunch a couple of years later. Edison rarely got to leave the facility as he couldn’t walk or lift himself out of the wheelchair. We borrowed a hoyer, which is a special piece of equipment designed to lift a disabled person and — with a nurse’s assistance, we were able to load him in my truck. Though it was hard to understand Edison, as his speech had been affected by the strokes, he was able to direct me to his favorite restaurant in Pacific Beach. He hadn’t been there in over ten years. We got one of the cooks to help us unload him and had a wonderful lunch of baked salmon and a nice bottle of Merlot. He was such a gracious man and we talked about everything…families, motocross, business, and women! The candle hadn’t burnt out on this older gentleman. If you go to Glen Helen Raceway, you can stroll down the Walk of Fame and see Edison Dye’s Lifetime Achievement Award.

After I returned him to the nursing home, I reread his biography that the family had given me years ago and it gave our lunch conversation special meaning. Some of the things he had said at lunch I now understood. What a special day! I’ll always remember how very emotional Edison was on receiving this long overdue credit for his huge contribution to motocross. The next year Edison Dye was inducted into the AMA Motorcycle Hall of Fame and in 2001, in front of a sold out Anaheim Supercross, he was presented with the Mickey Thompson Lifetime Achievement Award.