Florida is the mecca of top pros. Both Ricky Carmichael and James Stewart are from there and 16 of the current Supercross riders reside there including Ryan Dungey, Ken Roczen, Chad Reed and Mike Alessi. Daytona also has the distinction of being one of the first artificially built motocross tracks being added to the attraction of Daytona Beach Bike Week in 1971 . Atlanta was one of the most interesting events this year with high profile crashes, new controversies and fresh faces in the 250 class. While Dungey took the win extending his points lead even more, everyone thought Marvin Musquin was going to be the race winner until the last lap. 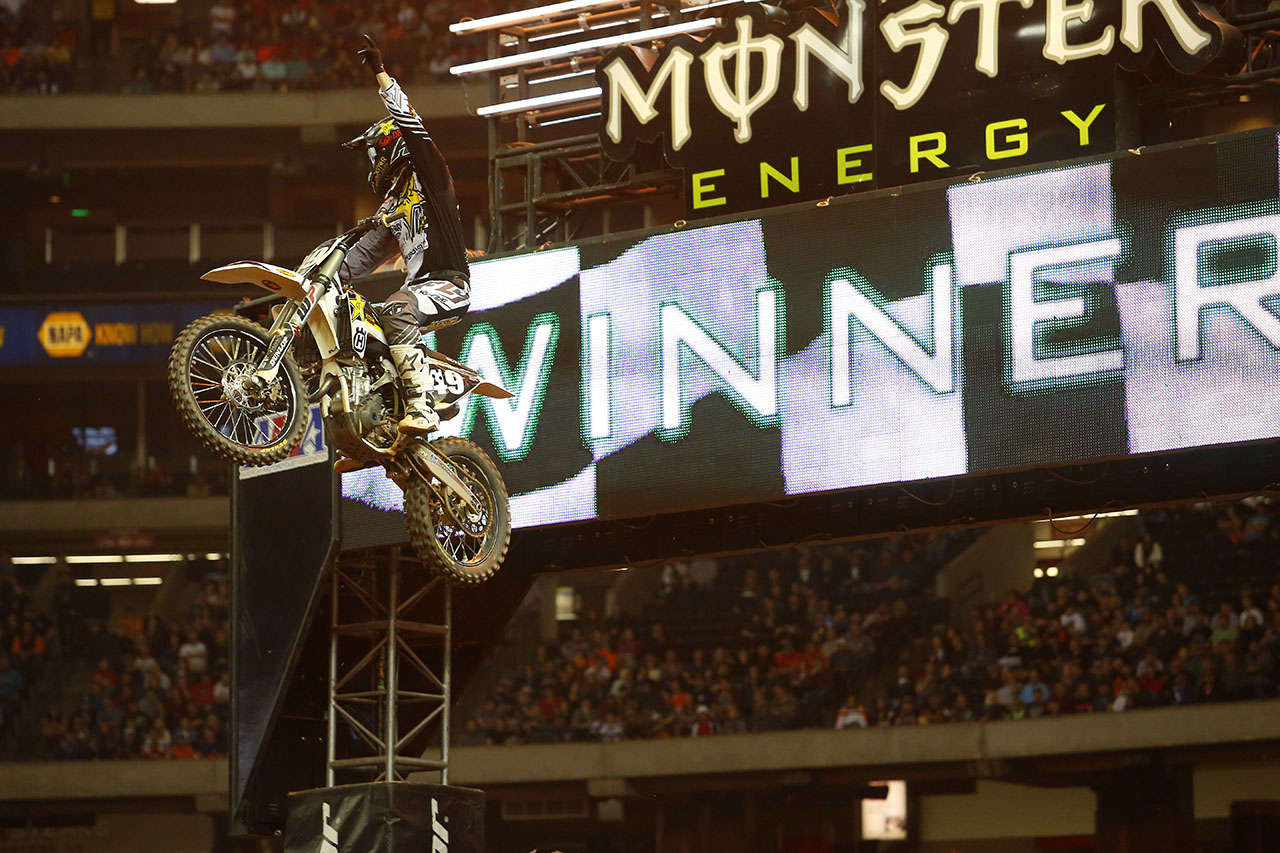 Ken Roczen takes a dive in the season opener.

Will Hahn – Broken collarbone, torn labrum, broken scapula.
Andrew Short – Concussion from the three way crach between him Will Hahn and Phil Nicoletti.
Phil Nicoletti – May not race if knee isn’t 100%.
Justin Barcia – The pins are out of his thumb, but he has yet to start riding.
Broc Tickle – Recovering from a broken wrist.
Ronnie Stewart – Also recovering from a broken wrist. Should return in St. Louis.
Kyle Chisholm – Recovering from a broken humerus, dislocated shoulder and concussion.
Dusty Pipes – Like Chisholm, he is recovering from both a broken humerus and dislocated shoulder.
Tyler Enticknap – Broke his thumb at the first San Diego round. May return in Toronto.
Dean Wilson – Out for the 2016 season with a torn ACL and meniscus.
Adam Enticknap – Out for the season due to a broken femur.
Tevin Tapia – Broken wrist from preseason still healing.
Coming off the couch –Blake Baggett.

Dakota Tedder – First casualty of 250 East. Got a concussion, broken scapula  and fractured ribs.
Luke Renzland- Second 250 casualty of the 250 East division. Broken collarbone.
Nick Gaines – Out of the 2016 Supercross season with a broken femur.
Adam Cianciarulo – Still recovering from a broken wrist.
Jordan Smith –  Injured shoulder.
Zach Bell – Still healing from a broken collarbone, but may not finish the Western SX if his infection isn’t taken care of.
Jessy Nelson – Out of Supercross with a shoulder/back injury and concussion.
Luke Clout – Out of with a broken femur.
Mark Worth – He dislocated a hip and broke his elbow on the first lap of practice at Anaheim 1.
Daniel Baker – Done for the 2016 Supercross season after tearing his ankle.
Josh Osby – Broke some ribs and punctured a lung.

DAYTONA SUPERCROSS ONBOARD WITH RICKY CARMICHAEL