Todd Sibel excavates the Bud’s Creek section of the REM track on his way to the 450 Pro win.

After a long, but abbreviated, 2020 season the REM racers gathered on their hillside track, just above the Glen Helen National track for one final get-together before they put on period on the end of the 2020 REM Motocross season. For most of the riders it was just a footnote on a season that had been interrupted by the pandemic in the Spring only to spring back to life by Summer. But for two riders, former AME number one Pro Will Harper at Indian Dunes and former AMA Pro and Kawasaki test rider Robert Reisinger, it was the final showdown of a series-long battle to earn the most points of any rider at Glen Helen Raceway in 2020. They raced in one of the toughest classes at REM—the Over-60 Expert class. That may not sound all the tough to riders outside of SoCal, but the Over-60 Expert class at Glen Helen is full of former AMA Pros and is often the most jam-packed class of the day—and the big points come from winning the largest and toughest classes. Being the Number One rider comes with perks and prizes, but most of all it comes with a sense of satisfaction (and a little regret over races they may have missed when real life got in the way in 2020).

Pete Murray can make a YZ125 sing—just ask the 450 riders behind him in his class.

At the final race of the year, the two old Pros were not interested in being remembered for what they accomplished in life after their professional racing days. Will Harper was and is a successful Hollywood stuntman from one of Tinsel Town’s elite stuntman families, while Robert Reisinger went on to design his own full suspension mountain bike, the Mountain Cycle San Andreas, that put him in the “Mountain Bike Hall of Fame” (he also works at 6D helmets where he helped pioneer the ground-breaking and industry changing 6D ATR-1 and ATR-2 helmets). Like little kids, they wanted to win the REM Number One plate, and the points race had come down to this one final showdown. Will Harper played it safe at the final race to secure the Number One plate (which no REM Number One rider in the 31-year history of the series has every worn on his bike). See the pavement in the background? This week’s REM track actually crossed over it halfway though each lap. Robert Reisinger had a great year. He won the most races and came close to the Number One plate.

But there were surprises in store for Will and Robert on the big day. First of all, the arrival of Pete Murray at the final race meant that gathering points had suddenly become tougher. Pete Murray is a four-time World Vet Champion with the Over-40 Pro title in 2000, Over-50 Pro crown in 2012 and the Over-60 Expert Championship in both 2019 and 2020. Even though Murray showed up with a YZ125 two-stroke, he was definitely going to take points away from Harper and Reisinger. And he did! Coming from the kind of start that 125’s get against 450s, Murray sliced his way from 10th to first in both motos—winning easily. Robert Reisinger, who needed every available point, led until Murray showed up in second place, and even when Murray went by, Reisinger hung with him for as long as he could, but eventually had to let Pete go. Reisinger’s second, followed by Zaca Station’s Ed Guajardo in third, was also dampened by Will Harper’s safe and sane fourth place in both motos.

Harper knew that as long as he didn’t fall out of the top eight, the the crown would be his. And with a 4-4 day, Will Harper won the Number One plate that he had set out of win back in January. Pete Murray, of course, won both motos with Ed Guajardo second with a 3-2 to Reisinger’s disappointing third with a 2-3. Will Harper (7) does his title hopes good with a second moto holeshot, but he would be passed by Ed Guajardo (27), Robert Reisinger (96) and eventual class winner Pete Murray (7) before the moto was over. But, Harper was counting points in his head. All of the classes rose to the occasion. In the Over-60 Intermediate class, former Saddleback Pro Luc DeLey went 1-1, but behind him three riders tied on points for second. They all had 6 points, with John Bosanko’s 4-2 beating out Stephen Braseny’s 3-3 and Marc Crosby’s 2-4. But not as big a thrill was following Brian Medeiors up a hill as he whips the rear of his KX450 through the trees on his way to second in the 450 Pro class.

The Pro class was an interesting battle between Kurt Nicoll, Brian Medeiros and Todd Sibell. Nicol was giving up 25 years to his younger competitors, but the former Grand Prix star and KTM team manager gave them no quarter. Todd Sibell was on fire and would not be denied. He took the 450 Pro win with a 1-1 over MXA’s Brian Mederios’ 2-2 (Brian is just coming back from a broken finger that amazingly enough the doctor had plated with what looked like tiny master links). Following in the wake of the three fast Pros was MXA’s Josh Fout, who was put in the the Pro class even though he was signed up in the Vet Intermediate class. Fout, who’s speed has doubled in 2020 (which he started in the 450 Novice class), drafted his way up to fourth overall in the combined 450 Pro, Vet Pro and 250 Intermediate class. He would come back later in the program to win the 450 Open class on MXA’s 2021 KTM 450XCF cross-country model (the class is called the Open class because it is open to all skill levels from Novice to Pro as an extra class). TM importer Ralf Schmidt (73) is the best salesman for the boutique Italian two-stroke when he wins the Over-40 Expert class. It’s nice to see John Caper back on the track after a long medical lay-off.

THE WINNERS AND THEIR MINION John Griffin on his way to the Over-50 Expert win. Bill Reimer, the rider highest in the air,  won the Over-50 Intermediate class. Russell Brown (16) comes out of the light and into the dark. Over-40 Novice: Robin Hall had a perfect score in front of Lamont Dusseau and Gary Taylor.
450 Novice: Geremy Patterson took the win in front of Chris Hyden and Ryan Ogan.
250 Novice: Draven Lamb went 1-1 to James Bentuccini’s 2-2 and Isaiah Wilson’s 3-3. 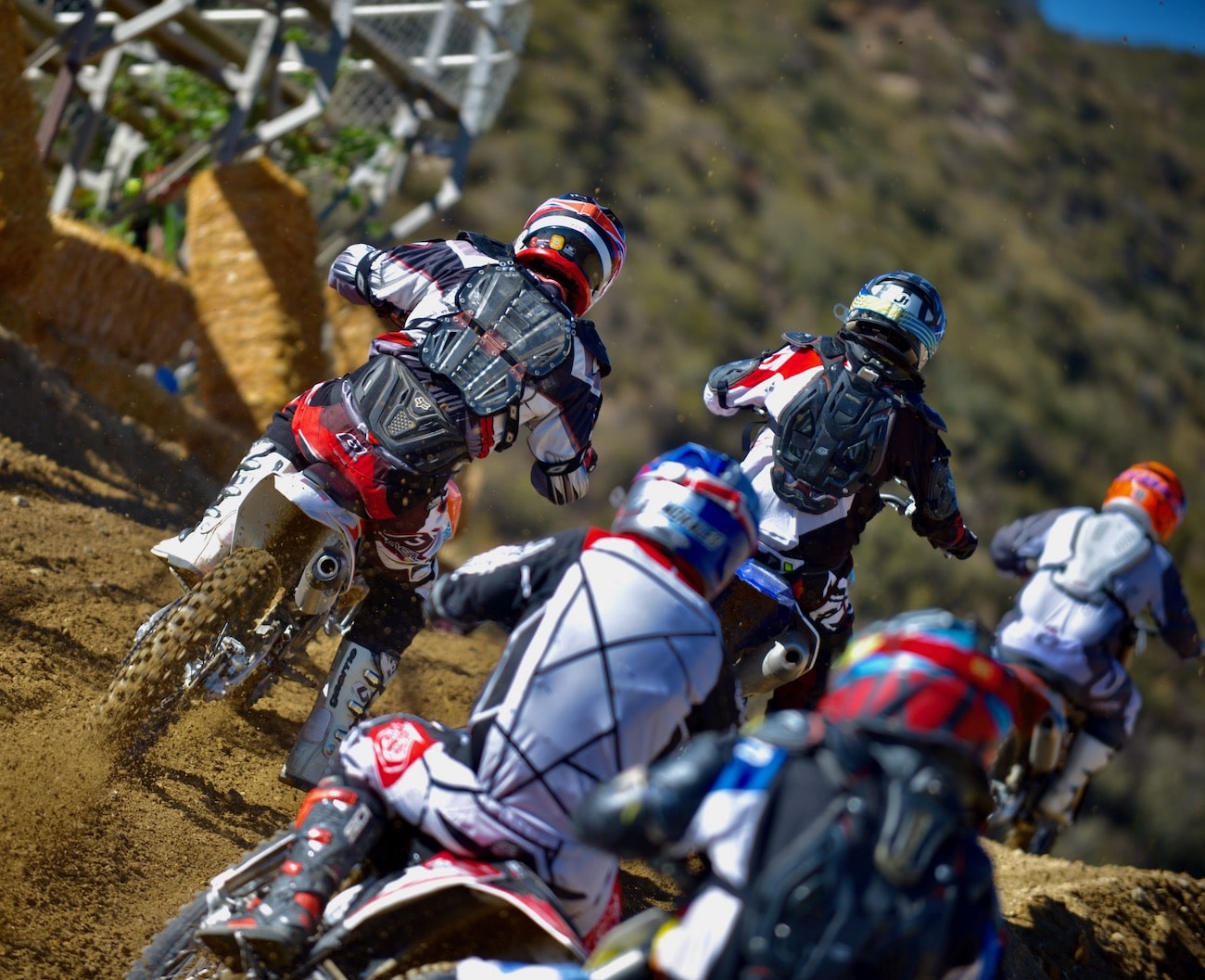 MXA’s Jody Weisel (orange helmet) leads a gaggle of riders over the rise behind the bleachers. 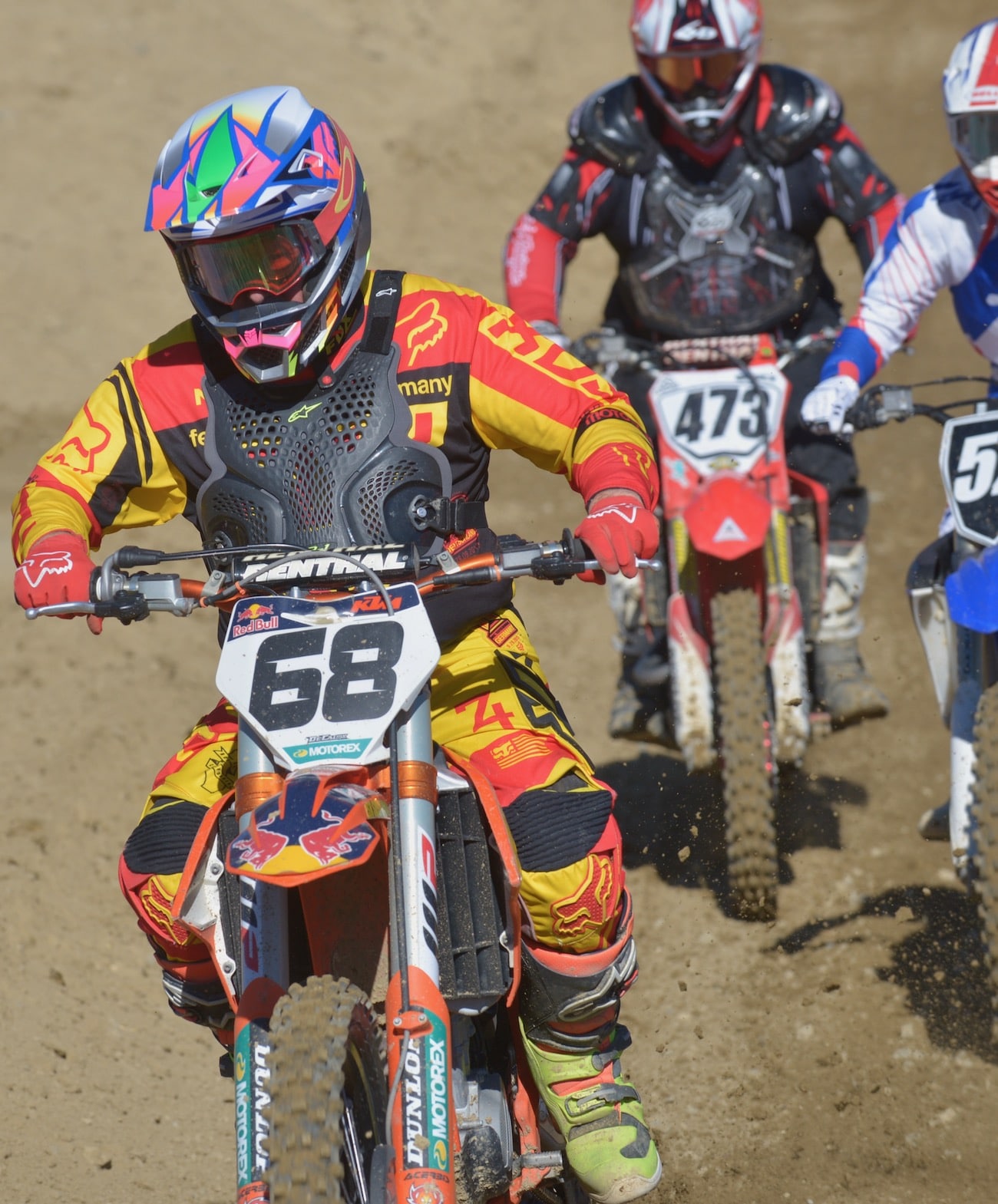 Brit Tony Parson went 3-3 in the Over-65 Intermediates. Big Bear Lake’s Gabby Sanchez is an experienced trail rider, but raced her first-ever motocross this week. She loved it. Both Sonya Seale (above) and Gabby Sanchez were on off-road models and rode them well. Photo: Jon Ortner David O’Connor has left KTM and opened up his own race shop called DOC MX Racing Services. Go to his Instagram page at docmxracingservices to see more. Photo: Jon Ortner 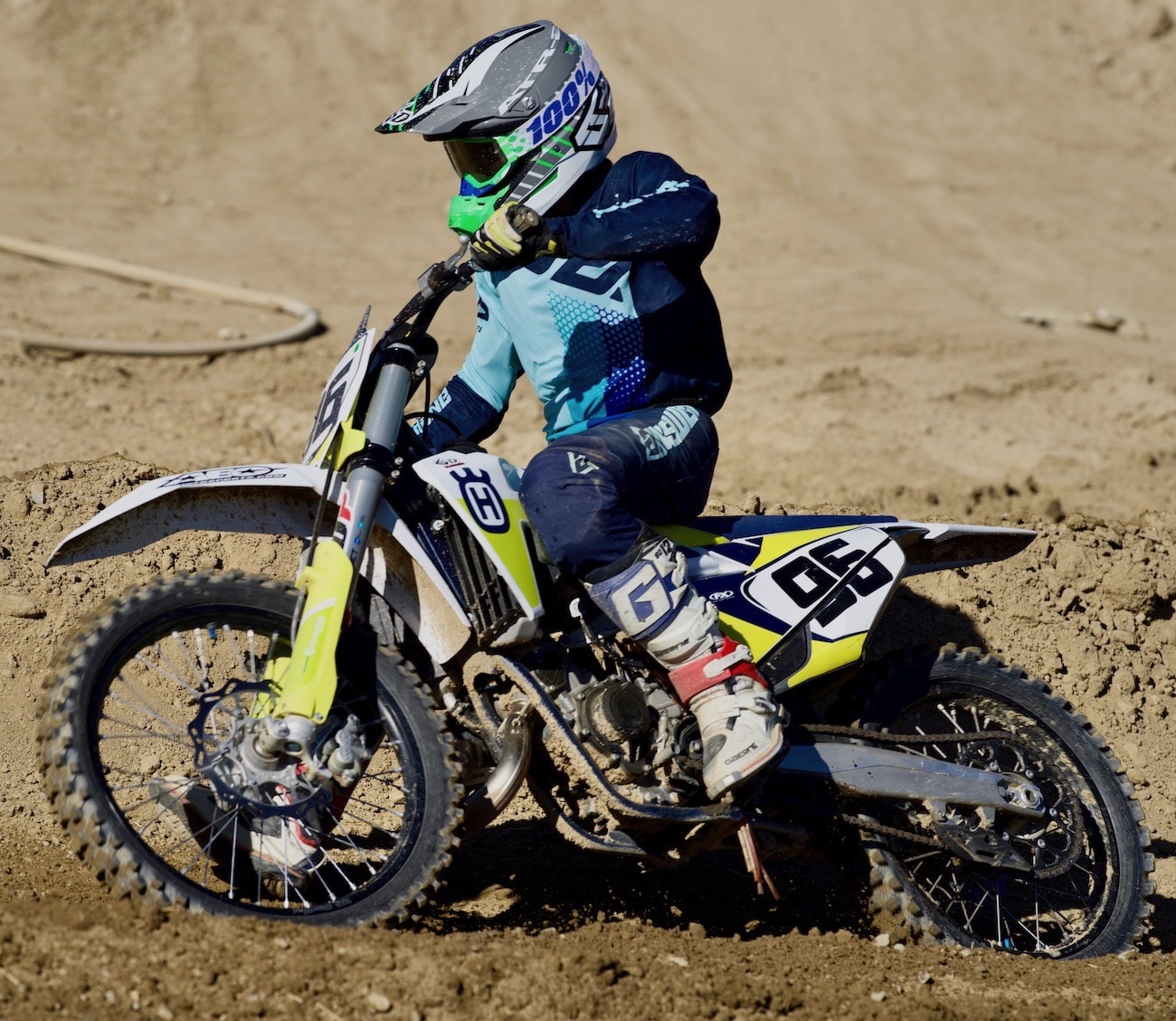 …And then he threw it away. Nick handled the disappointment like a pro. Photo: Jon Ortner Rich Eierstedt was REM’s number One rider 20 years ago.

REM will begin the 2021 season with a bunch of scheduled races in January and February—dates to be confirmed later.  For more info go to www.remsatmx.com or Click Here for REM’s Facebook page.

BEST OF JODY’S BOX: THE DAY THEY PRESENTED ME WITH MY TOMBSTONE