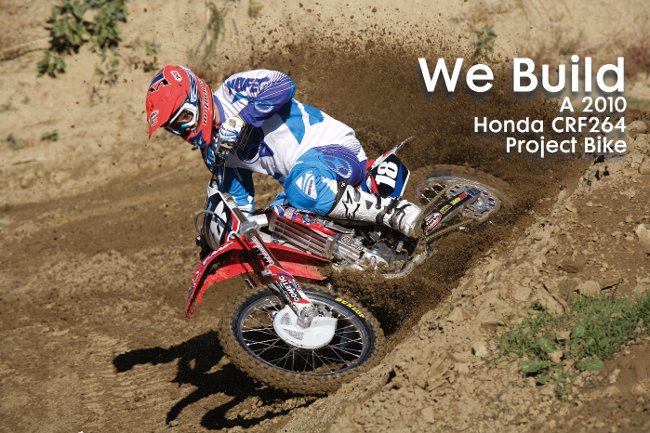 What’s unique about this MXA project bike is that it wasn’t possible a few months ago. In the past, the MXA wrecking crew has had phenomenal success with big-bore engines?with the sole exception of the Honda CRF250. From its inception, the CRF250 has defied the hop-up mavens’ attempts to make it big. It isn’t that building a big-bore CRF250 isn’t a good concept, it’s just that from 2004 to 2009, it couldn’t be executed. Honda’s cylinder liner was barely thick enough to contain the forces of the stock 250cc engine (and in 2004, it was not even able to do that). The idea of boring out the super-thin liner scared most tuners. That only left two options:

(1) Replace the stock Nikasil liner with a steel sleeve (something that most tuners were opposed to).

As a result, Vet racers, play riders and offroad guys on Suzukis, Yamahas or Kawasakis could tool around on powerful big-bore engines, while CRF250 riders were not allowed to join the club.

Voila! Enter the fuel-injected 2010-2012 Honda CRF250. Not only did it get a totally new engine, fuel injection and a revised bore-and-stroke, but it got a 3mm thicker cylinder liner. Suddenly, with a snap of the Honda engineers’ fingers, the CRF250 could be turned into a big-bore. Suddenly, with a snap of the Honda engineers’ fingers, the CRF250 could be turned into a big-bore.

Of course, when you are building a project bike, you need to dot all the i’s and cross all the t’s, so we started thinking about our other complaints about the 2010 CRF250 and how to address them while we had the cylinder off.

SHOP TALK: WHAT IT’S ALL ABOUT?

While we were having the cylinder bored and replated at Millennium, we decided to go after the rest of the CRF250 with a six-pronged attack:

(1) MB1 Suspension: The 2010-2012 CRF250 comes with Showa suspension. The 48mm forks have Kayaba-style internals and new fork pistons. The Showa shock layout is a clone of the CRF450 shock, and it has also been moved lower and farther forward in the chassis.

Forks: The first thing MB1 did on the Showa forks was to change to stiffer springs (going from the stock 0.44 kg/mm to 0.46 kg/mm springs). This vastly improves the CRF250’s fore/aft balance and cuts down on the CRF250’s death-defying head shake. Additionally, MB1 reworked the Showa’s compression valving to give the forks a plush action, but with a firmer feel. We ran 335cc of oil with the rebound on eight and the compression on nine clicks out.

Shock: The Showa shock presents an interesting dilemma for a suspension tuner. The CRF250 rides low in the front and high in the rear (classic stinkbug). Stiffening up the fork springs helps with this problem, but the shock could use a little help also. MB1 changed the shock’s damping to be a little softer initially and stiffer later in the stroke. This allows the CRF250 to feel a little lower in the rear, while the increased high-speed damping improves bottoming control. MB1 dynos each shock and fork damper to make sure each one is putting out the resistance numbers that MB1 is aiming for. MB1 purchased the dyno that Team Honda used when MB1 owner Mike Battista (MB) was Team Honda’s suspension technician. For more information, go to www.mb1suspension.com or call (951) 371-5045.

THE STOCK 2010-2012 CRF250 ENGINE IS A PURE MIDRANGE POWERPLANT. IT HAS A SURPRISING LACK OF LOW-END (GIVEN THAT EVERY FUEL-INJECTED 450 PUMPS OUT ABUNDANT LOW-TO-MID POWER) AND IS FAIRLY FLAT ON TOP. 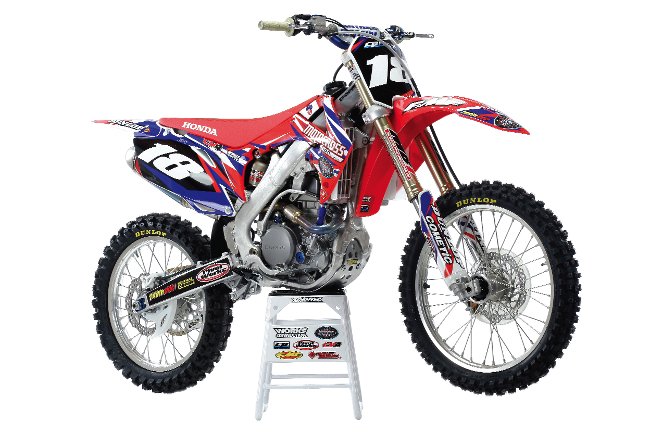 On many big-bore 250s, you can just focus on the power plant and leave the rest of the bike alone. Not so with the 2010-2012 Honda CRF250. Making more power puts even more stress on the chassis and suspension.

(2) Shock linkage: The MXA wrecking crew heartily recommends a revised shock linkage on the CRF250. Honda gave the 2010-2012 CRF250 a 27.15 head angle (it was 27.90 in 2009). This radical head angle was part of Honda’s new chassis theory, but, in our opinion, they took it too far. The longer link lowers the rear of the bike, kicks the head angle out, offers more fork height options, and works well with MB1’s revalved shock. Aftermarket rising rate links are available from Pro Circuit, Factory Connection, Ride Engineering and MB1.

(3) Hoses: Although we have had good luck with Honda’s stock radiator hoses, CV4’s silicone coolant hoses are more reliable, stronger and color-coded. We also used a higher-pressure CV4 radiator cap from www.cv4.net or (800) 874-1223.

(4) Graphics: MXA has had a very good relationship with Face Lift Unlimited (FLU) graphics, and the bold red, white and blue design of MXA’s CRF264 graphics is a testament to their creativity. For more information, go to www.fludesigns.com or call (661) 256-2313.

TEST RIDE: A BIKE WE WAITED FIVE YEARS FOR The stock 2010-2012 CRF250 engine is a pure midrange powerplant. It has a surprising lack of low-end (given that every fuel-injected 450 pumps out abundant low-to-mid power) and is fairly flat on top. If the MXA test crew had our druthers, we’d want the stock Honda to produce a broader powerband?so that there were more options in tricky situations.

When we first started testing the CRF264 engine, we ran it with the stock exhaust system. It produced potent low-end power and was much stronger through the middle. Most of the Vet and Novice test riders loved the powerband, but faster test riders, as always, wanted more top-end. Our quickest and simplest solution was to install a $549.99 FMF Factory 4.1 Ti slip-on system and $299 PowerBomb head pipe. This added a ton of over-rev and, while it took away some of the chunky low-to-mid of the stock pipe, it broadened the powerband and made the CRF264 much easier to ride.

Strangely, the powerband was so broad that it lacked the kind of hit that we felt would make it a better race bike. The quick fix was to gear it down one tooth on the rear. What’s strange is that we rarely gear down big-bores, because the extra power makes up for any gearing flaws (which the 2010 CRF250 doesn’t have in 250cc mode). 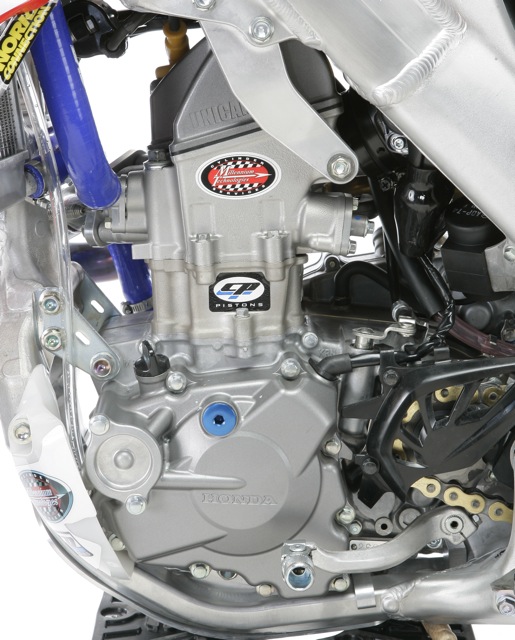 This is a bike that we couldn’t build with the old Honda engone (because the previous Honda CRF250’s didn’t have enough meat in the cylinder liner to make it a safe choice). We think that  Honda CRF250 riders will find the ability to punch up the horsepower and broaden the powerband to be more than worth the $600 that this engine kit costs.

MXA VIDEO INTERVIEW: MARVIN MUSQUIN KNOWS WHAT HE HAS TO DO TO WIN IN THE 250 WEST