We know a lot more about the prototype of the 2021 Honda CRF450 if the MXGP season hadn’t been cut short after only two races. This is Tim Gajser’s MXGP Honda CRF450 works bike. Look below to compare it to the current 2020 Honda CRF450 production bike. 2020 production bike: Note the different shape, size and bending point of the aluminum frame spars between the Gajser bike and this production 2020 CRF450. Works bike: Note what looks like a seat bolt at the front of Gajser’s seat. Also, there is only one bolt on the left side panel, which could mean that the air filter is accessed from the side without removing the seat. There are two bolts holding the right side panel on. 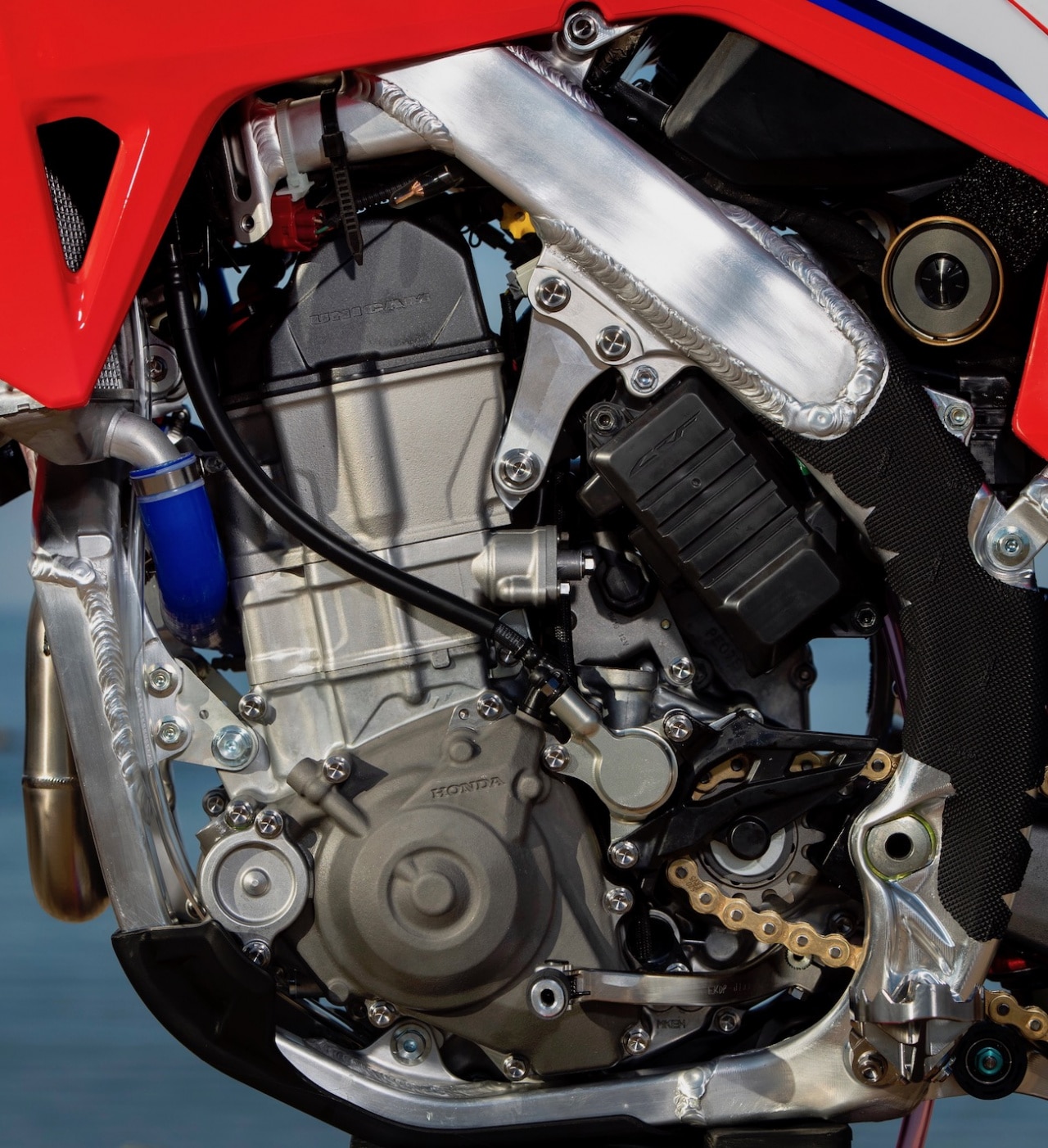 The works bike has had a hydraulic clutch for some time. Even though Tim Gasjers CRF450 has a hydraulic clutch, it does not mean that the 2021 CRF450 production bikes will get one. However, it goes without saying the CRF450 needs a better clutch. The 2020 Honda CRF450 cylinder and head have the same cast parts as the works bike engine — no information about anything that may be changed inside the head. Mitch Evan’s CRF450: Honda’s new plastic design does seem to borrow from other brands, but every brand has to stay contemporary. Plus, much of this look dates back to the 2011 Italian-built Husqvarnas which were unpopular when they came out The works CRF450 clutch cover is close to the stock CRF450 cover, but it does not have the oil filter access plug, while the engine’s side case is sand-cast, perhaps from magnesium, has a sight glass and oil filler cap (at the top) that the stocker doesn’t have.  The water pump is the same casting with a different material and the radiator spigot is angled downward to allow the hose to slip on easier. The production spigot has a bend and the hose had to curve to meet it. 2020 production bike: For comparison to the photo above, this is the right side of the 2020 production engine, including the clutch cover, side case and water pump. You can also see the bend in the radiator’s water spigot. Doesn’t this photo make you nostalgic for Honda’s twice pipes—if it does then you never understood how stupid they were. Gajser’s single exhaust system is lighter, less complex, easier to work on, doesn’t heat up the airbox and can be replaced, repacked or repaired for a fraction of the cost of a twin. Since Honda never allowed a factory-sponsored rider or support team to run anything but twins, the fact that Gajser’s bike has a single on it means that twice pipes are dead for 2021. 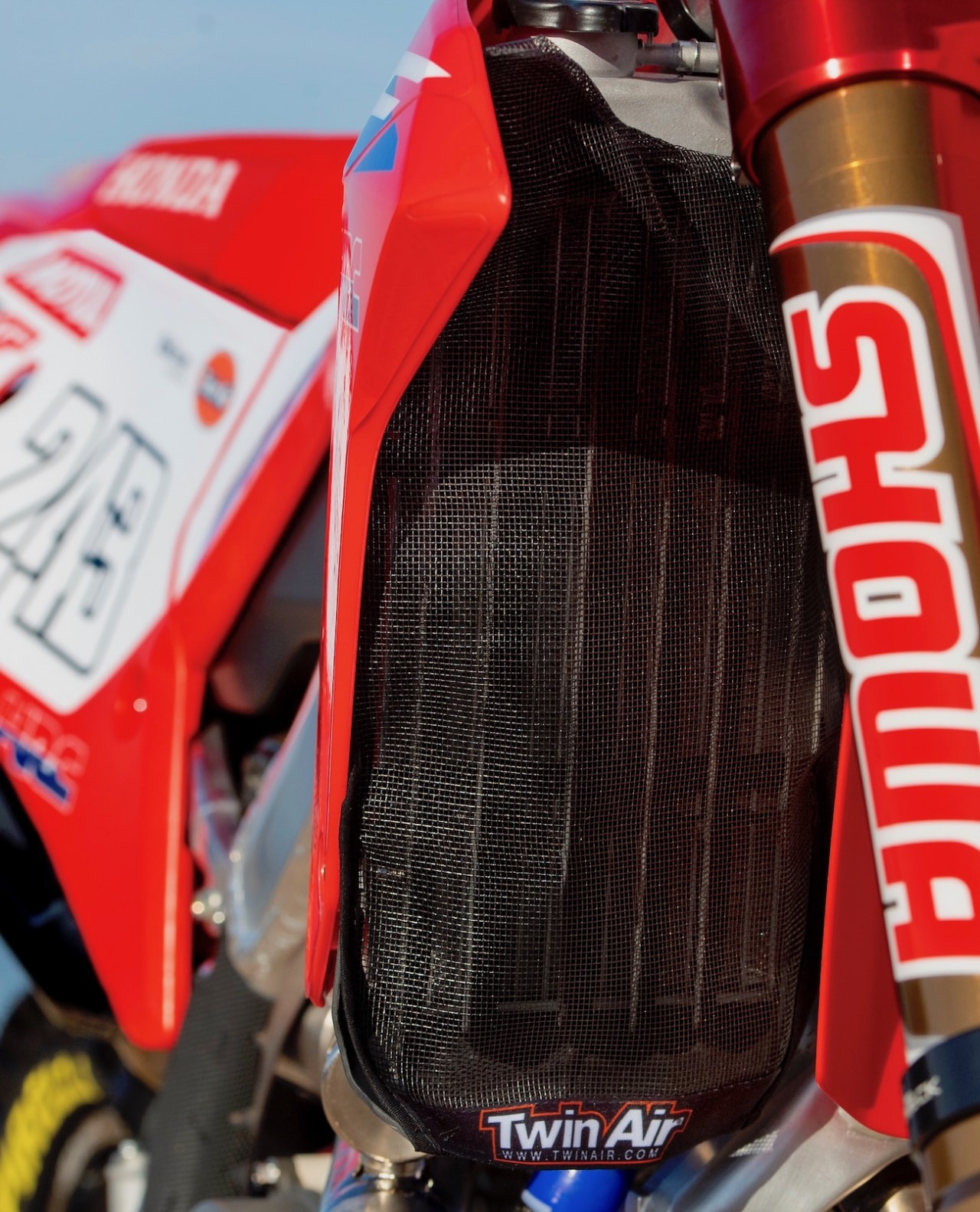 The works Honda protects its radiator finning with Twin Air Sleeves. Production Honda owners would be wise to do the same thing, since the finning in the CRF450 radiators are prone to getting dented by roost. Obviously the 2021 Honda CRF450 will not get Showa works forks with titanium-nitrite coated legs or a works hub, but they will get this front number plate and front fender. The titanium footpegs have a unique look that looks both light and strong at the same time. The HRC works bikes uses the same axle block as the 2020 production bike, but the chain adjuster bolts, axle and sprocket bolts are titanium. The 49-tooth rear sprocket is a steel/aluminum hybrid. Tim Gajser on his new bike. The first 450 Grand Prix is on March 1 at Matterley Basin in England. In America, riders who win the Championship are required by the AMA to run the number one plate, but Europe has no discernible number system.

WHERE MOTOCROSS STARTED BY ROGER DeCOSTER