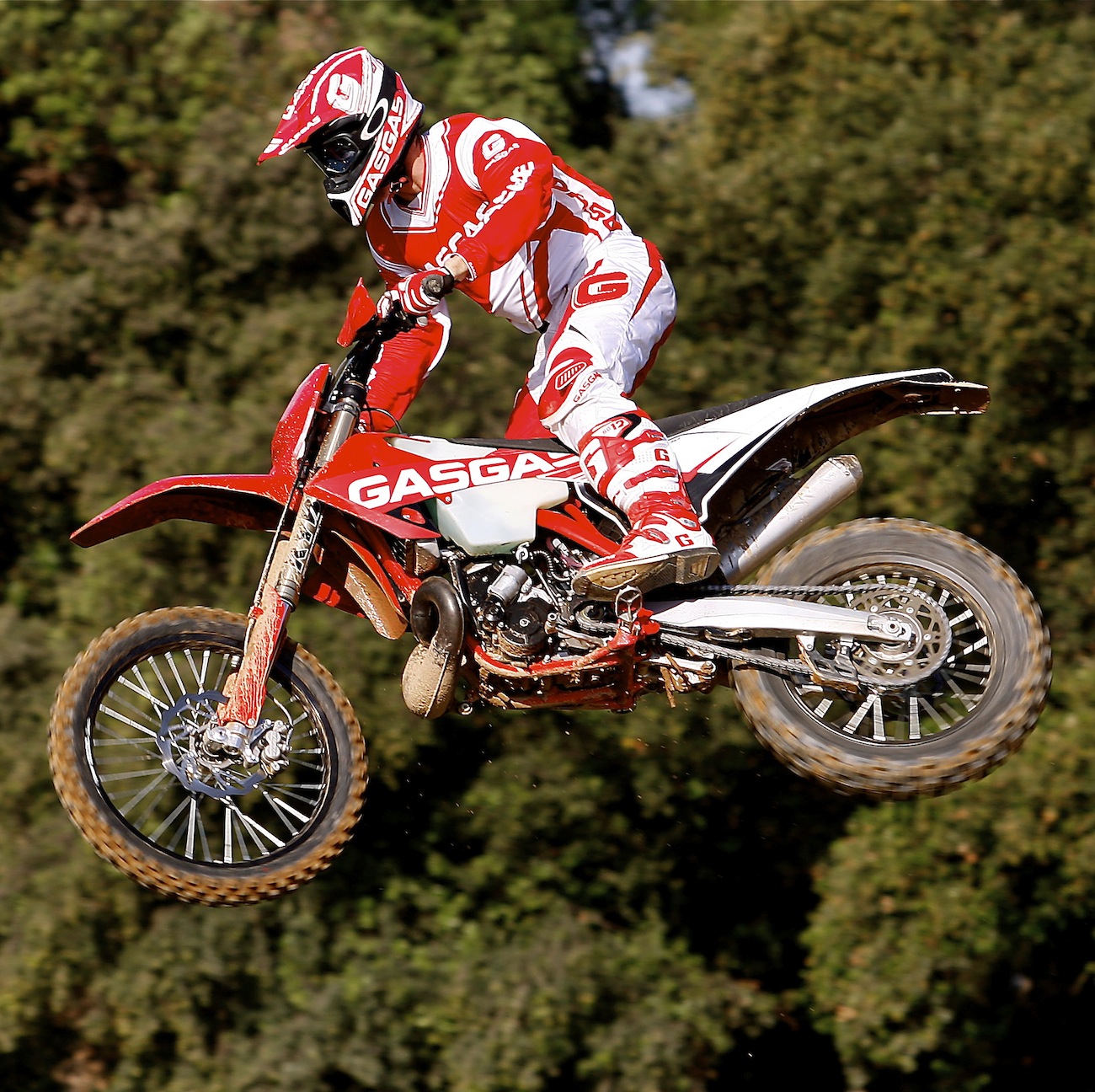 GasGas North America will offer a free AMA membership with every new 2017 GasGas motorcycle purchased in the U.S. This program is designed to help support the AMA’s membership efforts and to get every GasGas owner to be a member of the AMA. The free membership program begins Dec. 1st, 2016 and will continue until further notice. Any GasGas customers who is already a current AMA members will get their AMA membership extended one full year. In addition, GasGas is also offering a Holeshot Starter Package with every new GasGas sold between Dec. 1, 2016 and January 31st, 2017. The Holeshot Starter Package includes extra brake levers, brake pads, air filter, assorted Spectro lubricants and a GasGas T-shirt and hat. The whole package is worth over $800.

“We are very proud to offer a free one-year AMA membership with the purchase of one our motorcycles,” said GasGas’ Scot Harden. “We strongly believe in and support the mission of the AMA and can think of no better way to help grow membership than by offering the membership free of charge. Our sport has never needed the AMA more than it does today as we are under constant attack by regulatory bodies and environmental groups.” The factory Yamaha team is Chad Reed and Cooper Webb, but backing up the team heroes are 12 talented riders on four Yamaha supported teams. Here is the list. For more info go to www.6dhelmets.com

COOPER WEBB ON HIS YZ450F AT MILESTONE

WHAT THE 2017 SUPERCROSS PROGRAM WILL LOOK LIKE WITH TIMED RACES

CHRISTMAS GIFTS FOR MOTO-HEADS KID — 40% OFF FOR MXA GUYS Smooth industries has set up a Special Discount Code EXCLUSIVELY FOR MXA READERS – Just Enter “MXA40” at check out and they can receive 40% off the entire order. They have lots of cool products that make prefect Christmas gifts fore anyone interested in motocross — especially kids.www.smoothindustries.com

ANOTHER ONE BITES THE DUST According to the Ottawa, Kansas, Herald, a former motocross track, sitting on 80 acres of land, eight miles from Ottawa, Kansas will be sold at auction. The track was used from 2010 to 2015 when the county pulled its special use permit. The aerial photo actually shows four different tracks of varying degrees of difficulty (and a small oval track behind the four-bedroom house)—this layout was obviously set up to be used as a riding area—not a racetrack—since no starting line is visible. It is unlikely that the county will issue a new permit for motocross use. The 80-acres are zoned “agricultural.” The land will go up for public auction on January 5, 2017, at the Franklin County Courthouse at 10:00 a.m. For more info go to www.freestonemx.com

IF YOU SPOKE WITH YOUR WALLET, YOU AND A FRIEND CAN RIDE FOR FREE If you bought a new bike in the month of December, show up at Glen Helen Raceway on Monday, December 26, and you, and a friend, can ride for free. All you have to do is bring the receipt (and not the one from Taco Bell).

MXA PHOTO OF THE WEEK Starting at Anaheim 1 on January 7, the Supercross heats, semis, last chances and main events will be based on time instead of number of laps. The 250 East/West will go 15 minutes plus one lap and the 450s will go 20 minutes plus one lap. The clock will start when the gate drops, and just like in real motocross, the leader will have to navigate one more lap at the end of the 20 minutes. But also, just like in motocross, the final lap starts when the leader crosses the line after 20 minutes. Which means that if the leader gets to the finish line when the clock is at 19 minutes and 58 seconds, he has to go around again before getting the one lap to go board.

This is a good rule. Last year there was one 450 main that wasn’t even 15 minutes long (actually 14:38). The new timed format will insure that every race, regardless of how short the track, will be the same length. This rule will have a bigger effect on the 250 East/West classes, as they only had 4 races out of 17 that were 15 minutes long (and 6 that we less than 13 minutes long). By comparison, the 450 class had 4 races that were over 20 minutes long and another 3 that were longer than 19 minutes. The fans, whether in Anaheim or Atlanta, will get to see the same amount of action (time-wise) and the riders will get a slightly larger test of their fitness and preparation. Ken De Dycker, after several terrible years with injuries, will race a Suzuki RM-Z450 for the Italian-based J-tech team. In 2016 DeDycker broke his femur before the start of the season and when he came back in August he got hurt again. J-tech was a Honda team last year, but will switch to Suzuki’s for 2017. DeDycker will turn 33 years old this year, but he is a good catch for the J-tech team as he has been a front runner, when not injured. Christini was awarded a contract from the U.S. Air Force for the delivery of 54 All Wheel Drive 450E Military Edition motorcycles. The award was the result of an open bidding process. Christini had previously delivered All Wheel Drive motorcycles to the U.S. Navy, U.S. Border Patrol, UK military, UAE, Jordan, and other NATO forces. Christini AWD is partnering with Tactical Mobility Training (TMT) of Fayetteville, NC for the off road motorcycle training as well as maintenance training for the USAF.

The Defense Department said that their previous “Kawasaki KLX 250cc motorcycles proved to be marginally fit for the high-altitude, rugged terrain of Afghanistan and the 2015 Kawasaki 250cc engine failed to meet new EPA guidelines; thereby rendering the motorcycle unfit for USSOCOM operations.” After several years of market research, Christini emerged as the manufacturer providing the technology and capabilities required by Special Forces units. The Florida Winter AM series will feature six rounds during the month of January, with the first taking place on New Year’s Day (practice on New Year’s Eve) on Gatorback Cycle Park’s newest track: Diamondback. One of the most critical engine components necessary for superior engine performance on the new 2017 Kawasaki KX250F is Pro Circuit’s new Water Pump Kit. Designed to keep your engine running cool when the racing heats up, the new Pro Circuit KX250F Water Pump Kit provided increased pumping capacity and reduced cavitation for maximum cooling efficiency. CNC-machined from aircraft quality aluminum and anodized for a factory look, the Pro Circuit Water Pump Kit has been rigorously tested by our own Monster Energy/Pro Circuit/Kawasaki race team for peak performance and unfailing reliability. The retail price is $204.95 at www.procircuit.com. Motorcycling Australia has announced a controversial ban of tear-offs for the 2017 Australian Nationals. That means that riders will have to use roll-offs. Belgium, Holland and England also ban tear-offs. The tear-off ban will be implemented in Oz starting on January 1, 2017, for all disciplines of motocross and off-road racing.

BAD NEWS FOR CHIEF DARK HORSE AND HIS INDIAN FRIENDS Indian Motorcycle is recalling seven different models, amounting to 23,746 units, for an issue with a fuel rail that may contact other components and result in a fuel leak. The recall pertains to the Chief Classic, Chief Dark Horse, Vintage, Chieftan, Chieftan Dark Horse, Springfield, and Roadmaster models, for the 2014 to 2017 model years (manufactured between April 15, 2013, to July 15, 2016). Christophe Charlier’s 2016 results were not what he expected and without any offers for 2017, Charlier went looking for options outside of MXGP. Charlier, a former race winner in 250 GPs, did not have his contract extended with the Rockstar Energy Husqvarna motocross team, but Husqvarna did sign him to race the 2017 World Enduro Championship. The Husqvarna’s 450 motocross team will be Max Nagl, Max Anstie and Gautier Paulin.