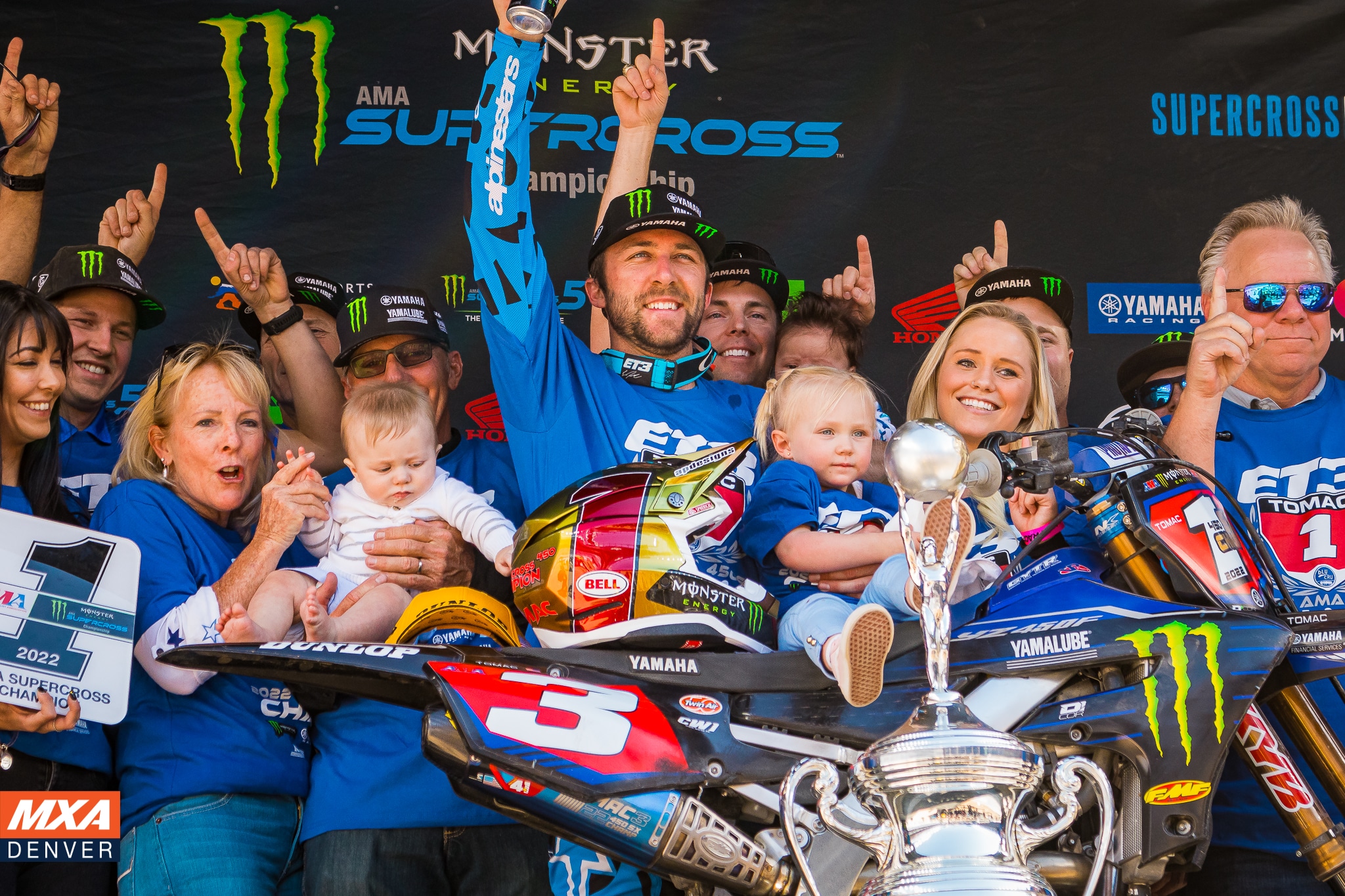 The title for the 450 championship in the 2022 Monster Energy Supercross has finally been claimed by Eli Tomac. After joining Star Yamaha, it seemed like Eli’s racing skills had been rejuvenated, and his attitude towards competing had completely changed. Happier, faster, and still 30 years old, Eli was on a mission to prove to everyone he still has what it takes to win another 450 title. In the 250 class, we had anticipated Christian Craig to get it done this weekend as well, but a series of events in the 250 Main would delay the championship once again.

There’s a lot to break down during the daytime activities in Denver so scroll down below to find out what happened after the riders qualified for the night show in MXA’s The Aftermath. Eli Tomac has been on a roll this year. But it wasn’t until he spilled the beans in his post race interview that we found out he had a knee injury.

With a set of racers on new rides, we questioned who would do well during the season. Eli Tomac on Yamaha, Jason Anderson on Kawasaki, Malcolm Stewart on Husqvarna, and both Cooper Webb, Marvin Musquin, and Aaron Plessinger on brand new KTMs. By the halfway point, it was clear who the two top contenders were going to be when it came to figuring out their new bikes, Eli Tomac and Jason Anderson. While Malcolm Stewart was incredibly (and still is) consistent onboard his new Husky, he wouldn’t be able to win a Main Event like the other two.

Another factor in the 2022 season was Eli’s ability to stay healthy and on two wheels. In similar fashion to the 250 classes, the 450 class suffered many casualties in the 2022 season, knocking many of the top riders out of the races. While some weren’t capable of maybe winning the championship, less riders meant less competition in the Main Events.

Eli Tomac had all the wins and the momentum going for him with a large points lead mid-season. However, Eli hasn’t won since Round 12 at Seattle and he announced in his post race interview that he actually sustained a knee injury at the Atlanta Supercross that has severely hindered him lately and added lots of stress to his Championship-winning hopes. In the post race press conference, Eli mentioned that he didn’t ride at all during the week leading up to the Denver Supercross, but when he woke up on Saturday morning to race, his knee felt better and he was confident that he’d be able to ride through the injury one more time.

The next question is, will Eli Tomac’s knee feel good to race in Salt Lake City? Will he push for another win or just finish out the season smoothly? How much will this affect his training for the Nationals? As the season started to come to an end, the competition boiled down to: When will Eli get the championship? And how many rounds will Jason Anderson delay this? Jason became the only factor to slow down Eli’s progress to victory as winning multiple rounds near the end of the season slowed Eli’s clinch on the season. However, by round 16, the points gap on first and second would become so large, that Eli would have to finish at least 14th to win the title. As entertaining as it was to watch Eli win the championship, it was just as entertaining watching a handful of riders not settle for anything less than winning in the Main Events. Jason Anderson may have been 43 points behind in the championship, but he was determined to continue his win streak in Denver. After getting a third place start in the 450 Main, Jason Anderson navigated the hard packed track to eventually make the pass on Chase Sexton who made a mistake in front of the mechanics. At the 15 minute mark, Jason Anderson made the move for first and would go to win his third race in a row. Jason wins three in a row. Malcolm Stewart would have one of the best Saturdays of his career as he would finish second place after passing Eli. Now that Malcolm had finished second and Justin Barcia had finished back in seventh, the two have flip-flopped in the points, resulting in Malcolm sitting third overall. Marvin Musquin once again proved to everyone he is a top contender, finishing in third place.

And back in fourth sat Chase Sexton, who sat back in eighth place after making his mistake while in the lead. Chase made his way through the field passing Brayton, Webb, Barcia, and eventually, Eli Tomac. The Justin’s battling it out to see which one can keep their name. Jason Anderson is in the perfect position for a second place finish in the season. Hunter Lawrence hasn’t been making it easy for points leader Christian Craig. Hunter grabbed the holeshot and would lead the race with Christian on his tail until the 10 minute mark, where Christian Craig would wipe out in the soft sand section and drop back to seventh. Hunter would win the race uncontested. This is what we mean when we say Christian was right on his tail. Michael Mosiman would have a quiet second place finish as all the enegery was directed to Jo Shimoda holding off Christian and Hunter winning the race. Despite making a small hiccup mid-race, Michael would hold onto his position and finish on the podium. Jo Shimoda didn’t let Christian by so easily. As Christian pressured Jo, the two would go back and forth trading positions. Eventually, Christian would get by and finish third, taking the championship to the final round. Christian Craig is still on top in the championship with a large lead heading to SLC. However, he’s now going to have to battle the East Coast 250s as well to earn his championship points. The only real battle left is the battle for fourth, as both Jo Shimoda and Vince Friese sit with 144 points each.

Here are some of our favorite moments from the day in Foxborough. Supercross may be fun from the other side of the TV but it’s a thousand times better in person. Captured by Trevor Nelson.