This Motocross Action archived article is from the 2005 November issue.

If John Paul Jones was at the helm of the frigate Honda, he would be screaming “Never give up the ship!” at the top of his lungs. Unfortunately, his famous exhortation would fall on deaf ears. When it comes to two-stroke motocross bikes, Honda is very close to raising the white flag.

Of all the major manufacturers, Honda can be forgiven for not throwing the full weight of their engineering prowess behind the 2006 CR250 two-stroke. After all, way back in 1972, Honda vowed that they weren’t interested in building two-stroke motorcycles. They claimed that their expertise was in four-stroke engine design and that was where they intended to ply their trade. Shockingly, in spite of their earlier protestations, in 1973 they released the first-ever Honda two-stroke. And for 33 years, they pursued two-stroke excellence–no, let’s make that 32 years, because it is obvious that for 2006 Honda has taken a step back. How do we know Honda’s intentions? We don’t, but we do know that the 2006 Honda two-strokes are mildly disguised 2005 models. We don’t have to ask for whom the bell tolls–it tolls for the CR.

Honda still has loyal two-stroke customers–riders who cut their eye teeth on the bark of a CR250 or the whine of the CR125, and, thankfully, they won’t be left high-and-dry by their friendly local dealers. There will be a 2006 CR250 on the showroom floors! The question is, how good is it?

A: The tank decal is different, but it takes a trained eye to spot it. That’s all folks. A: Not really. Don’t get us wrong, the ’06 engine is a good engine–it’s just not a great engine. Honda’s engineers focused the meat of the powerband in the midrange. And, once in the middle, the Honda power is as good as any bike made. From the middle to the top, it romps. It’s responsive and quick when the situation suits it. How does it compare to the blue, yellow, green and orange competition? That depends on what part of the powerband you are talking about. Low-end? Sorry, the CR250 is lazy down low. Midrange? This is where the CR250 does its best work. Top-end? It needs considerably more overrev to make the engine versatile.
Is it faster than the competition? In the hands of a rider who can carry beaucoup speed out of the corners and unerringly shift on peak, the CR250 powerband is competitive. Unfortunately, those skills are only found in the top three percent of the motocross population. With a less-skilled pilot in command, it’s a lot of work to stay on the pipe.

A: There are four keys to making the CR250 go fast:
(1) Keep the rpm dead center in the powerband.
(2) Every time the engine falls off the pipe, clutch the revs back up into the middle.
(3) Don’t overrev the engine, because it is flat on top.
(4) Never cruise. The CR250 wants you to go hard all the time. If you cruise, you bog. Q: HOW DID THE CR250 GET SUCH A PECULIAR POWERBAND?

A: It’s a mystery. History wouldn’t lead a researcher to the conclusion that Honda would ever develop a one-dimensional powerband. Starting as far back as 1983, Honda’s motocross reputation was based on their brilliant, do-it-all powerbands. Then, in 2002, Honda decided to drop their trusty reed-valve, piston-port design for a case-reed configuration. In hindsight, the radical engine departure looks like a gamble, but at the time, it wasn’t. Case-reed engines typically produce rock ’em, sock ’em powerbands. Honda was going for the fences with the case-reed design, but, unfortunately, Mighty Casey struck out.

From day one, the case-reed CR250 engine suffered from a serious case of the blahs. The low-to-mid transition was very weird. Down low, where the case-reed engine should have been pulling, it went “wah, wah wah.” It was doggy off the bottom. Once the rpm and fuel velocity built up, the engine ran fine, but not below it and not much above it.

Ever year since the case-reed’s introduction, Honda has vowed to make next year’s engine bark. Every year they’ve failed. For 2006, they didn’t try.

Q: HOW MUCH HORSEPOWER DOES THE CR250 MAKE ON THE DYNO?

A: This engine loves the dyno. It pumps out amazing numbers at every point on the curve. It is the king of all dyno bikes. But, and this is a big but, the dyno numbers are an illusion. Once the rear wheel is off the roller and on dirt, the magic numbers disappear. Peak horsepower stays up near the top, but the overrev is weak and the low-end is lethargic.

On paper, the CR250 should dig a trench at low rpm, but instead of going “braapp” it goes “wahhhhh.” A: We always felt that the CR250 was on the verge of detonating. Going up one main made it burble. Going down one made it ping. Q: WHAT ABOUT THE SHOWA FORKS?

A: The forks have a nice feel, ride fairly high in the stroke (especially compared to previous Showa forks) and are well sprung. The stock fork springs are 0.44 kg/mm (Pros might be tempted to go to 0.45s). Our best setting was with the compression on 10 click out and the rebound on 14 clicks out. We did add about 5cc of oil to the front forks, because they had a tendency to bottom too easily.

Q: WHAT ABOUT THE SHOWA SHOCK?

A: We loved it. We’d be lying if we said that we thought it was as good as the old-school 1993 chassis, which was the Ginzu knife of motocross bikes. But, the ’93 frame had serious head shake and, in an effort to eliminate it, Honda mellowed their frame geometry out in ’94. Each passing year saw new dimensions, but never an improvement. The handling reached its nadir in 1997 with the first Delta Box aluminum frame. It wasn’t until 2002 that Honda began to find the magic numbers that had eluded them for nine years.
Finally, Honda’s engineers pulled all the pieces of the puzzle together to produce a very good set of numbers. The current Honda CR250 chassis is excellent at turn-in, rocky steady at center-out and clean on the exit. A: The hate list:
(1) Low-end power: To make the low-end appreciably better, bolt on a Moto Tassinari VForce3 reed cage. It makes the low-end power cleaner, crisper and stronger. Next, add a Pro Circuit works pipe. It adds a ton of midrange and some extra rev so that you won’t be fretting about the bottom.
(2) Air filter: Honda’s air filter is the exact same size as the airbox. That isn’t as good as it sounds.
(3) Gearing: The CR250 really benefits from lower gearing. We added one tooth to the rear sprocket (from a 49 to a 50). This tightened up the gear ratios, got us into the meat of the power quicker and helped the CR out of corners.
(4) Radiators: We can turn the rectangular radiators into trapezoids with our knees.
(5) Electric power valve: Every time we felt that our CR250 was going off song, we would round up all the usual suspects (broken reeds, worn rings, bad jetting) to no avail. The problem was normally in the HPP valve. The cables on the power valve have a tendency to go slack. Once we tightened them up, we got our lost power back. 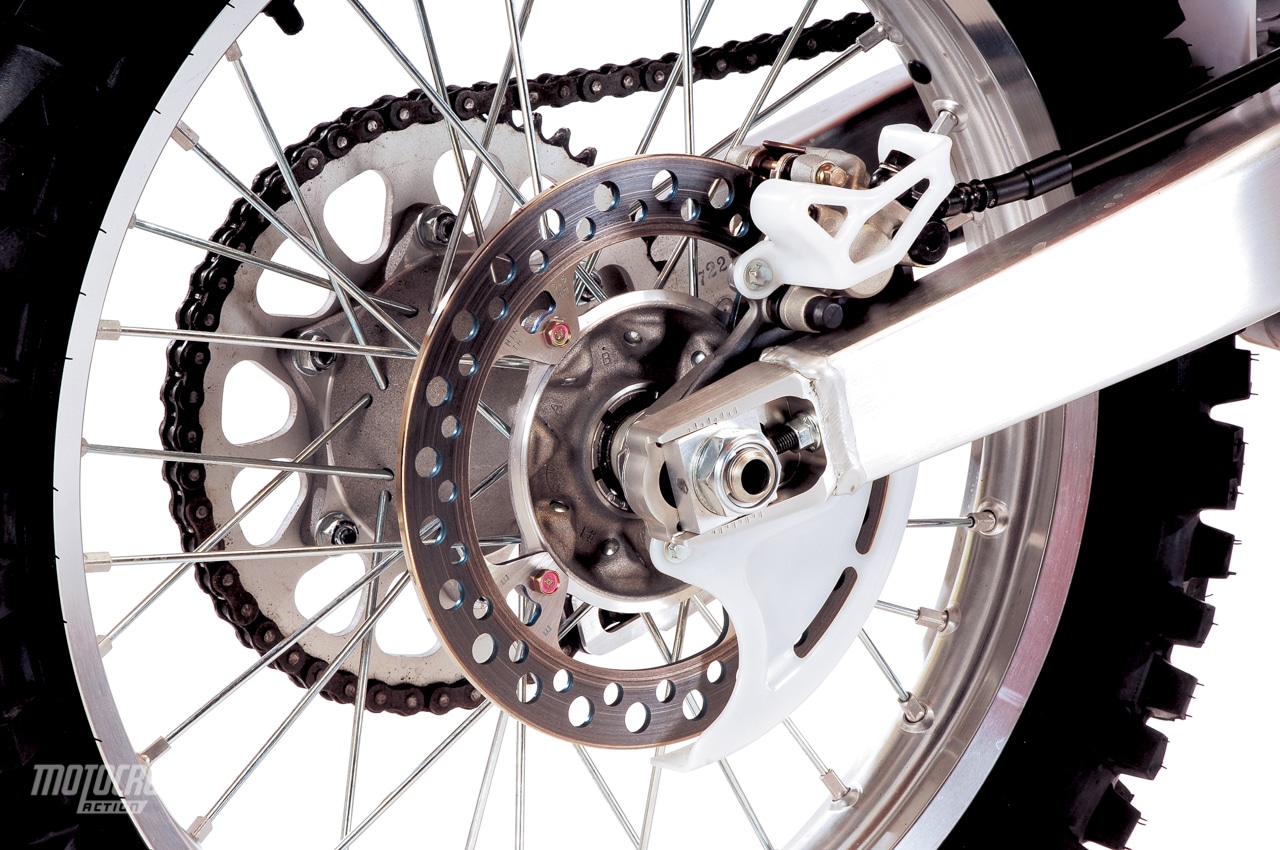 A: The like list:
(1) Handlebars: You can’t complain when a bike comes stock with Renthal 971s.
(2) Tires: We like the Dunlop 756 rear. The front 742 is a little too narrow-focus for our tracks and tastes.
(3) Suspension: Good stuff right out of the box. A: How do you know when your days are numbered? If you are a motorcycle, it is when the only mod you get for next season is a new tank decal. It’s a shame that Honda doesn’t have more faith, because Yamaha sold 50 percent more YZ250 two-strokes in 2005 than the year before because they believed in their bike enough to give it a total remake. It’s hard to get a consumer excited about your product if you aren’t excited.