What to do if the forks are a tad soft? If you’re Weston Peick you carry the front end through the rough stuff. Yes, the RM125 had enough zip and punch to pull a wheelie in the sand while being weighed down by Peick. Just another reason why two-strokes are too much fun. Photo: Paul Sachak/Armored Graphix

The day finally came. Weston Peick threw a leg over the JGRMX 2007 Suzuki RM125 two-stroke abck in 2017. It was a sight to behold, not just because 125cc two-strokes sound amazing in the hands of a Pro rider, but also because Weston Peick is built like an inside linebacker. Weston was initially hesitant to drop the hammer and send it for the boys. However, his reservations quickly washed away. The trusty RM125 held up to Peick’s abuse. Weston launched several big jumps down at the ClubMX main track, much to the delight of those lucky enough to be in attendance. 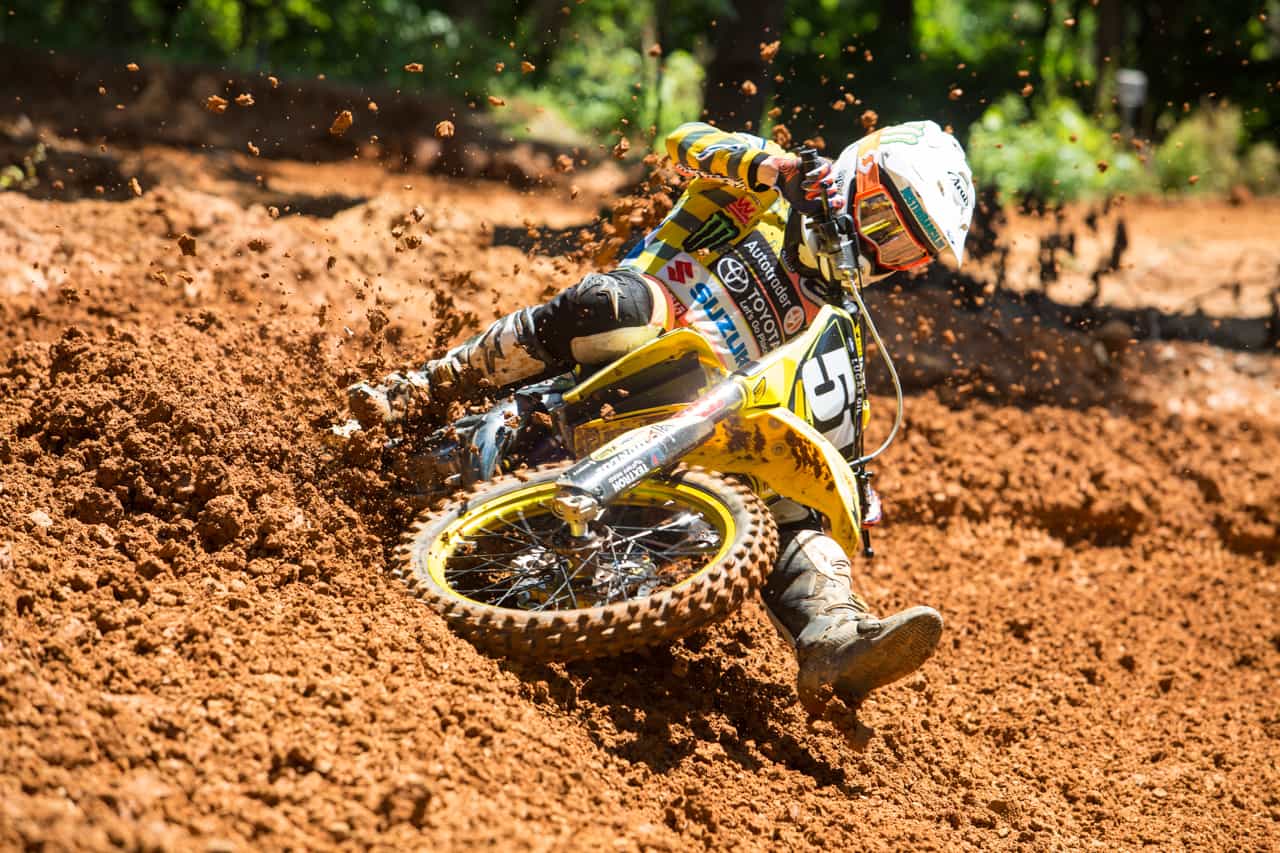 How low can you go? If you’re Justin Barcia on an RM125 two-stroke and have access to premium traction, the answer is very low. Justin put down a few fast laps on the bike. When he was done he was barely breathing hard. It sure would be something if MX Sports and the manufacturers could somehow work out a one-off two-stroke race featuring all of the top Pro racers.

Pro riders have a tendency of wanting what other Pro’s have. Originally JGRMX built the Suzuki RM125 for Weston Peick to ride when he flew out from California during two weeks of testing in North Carolina. Lo and behold, Justin Barcia rolled into town on Tuesday and spotted the RM125 looking shiny and new in the JGRMX entryway. Immediately “Bam Bam” wanted his turn on the bike. So yesterday, after finishing up suspension testing at the JGRMX test track, he hopped on the two-smoker. What happened next was mind-blowing. Barcia uncorked a display of aggression and insanity normally reserved for inside an octagon. Justin somehow, rather impossibly, cleared every jump on the JGRMX motocross track. Things got so outlandish that JGRMX team manager Jeremy Albrecht told Justin to dial it back a notch. Needless to say, Barcia had a blast on the Suzuki RM125. UP CLOSE & PERSONAL WITH THE JGRMX RM125